YOUNG EXPATS CELEBRATE 4th of JULY IN MADRID: See How They Shine (in Semi-Darkness)!

The plan was simple: make it big. The entire apartment would be red, white and blue.
But something crashed to the floor and the room went black.

After spending several consecutive summers abroad, I am now fairly accustomed to celebrating the 4th of July in some small way with a small group of fellow expats. We would talk of home, eat hamburgers, drink American beer, and listen to the Beach Boys or Guns N’ Roses for hours on end.

This would not be the case for the summer of 2013. Living amongst dozens of American students, I was forced to take up the flag alongside them and make our country proud with an Independence Day party worthy of the annihilation of an extraterrestrial invasion. We were not so successful.

The plan was simple: make it big. The entire apartment would be red, white and blue. The refreshments and even the food would be red, white, and blue. We would buy chips, and dip, hamburgers, hot dogs, bake cupcakes (bad idea), make Jell-O shots, employ all the customs that have come to identify our proud nation.

Step one was the purchase of these items. We quickly realized that we would have to content ourselves with European imitations of tortilla chips and cheese puffs (these, at least, far surpassed the name brands from the US). When we surveyed our apartment and realized that red, white, and blue streamers would have to be taken down as well as put up…we abandoned this plan.

However, thematic drinks, food, and cupcakes (groan) would still be deployed for the enjoyment of our estadounidense and Spanish friends. We bought grenadine, which we are still scrubbing off the counters and floors, for many of the drinks and cupcake batter. Here is where things began to fall apart.

I am not a baker, or a cook for that matter, so I trusted my roommates in the cupcake department and left them to handle the finer points. Last I saw, they were sitting in the kitchen, stirring the batter, and preheating the electric oven with a floor fan beating cold air into their faces. A moment later, as I was sitting in my room writing emails, there were screams in the kitchen, something crashed to the floor, and the room went black.

Our guests had not even begun to arrive, and half of our apartment was without electricity. We called every possible authority figure we knew of, but everyone had gone home. Even the emergency line for the electricity was closed. There was still enough light outside that we thought we could perhaps hide the awful truth from our guests as they were arriving, and the stove is gas so we could still avail ourselves of hamburgers and hotdogs.

We prepared the food, arranged the beer pong table (in the illuminated half of the apartment), and welcomed our eager, American friends. They poured into the room, dragging along European, African, Middle Eastern, and South American coworkers, roommates, friends, and distant acquaintances.

Chips were munched. Vodka watermelon was imbibed. Jell-O shots were slurped. Hamburgers were scarfed, and a very Independence-Day-worthy time was had by all, even if half the party was enjoyed by candlelight. Our guests stayed until 2am, a crime for which our neighbors will never pardon us. We sang the national anthem into the street and recited garbled versions of the pledge of allegiance over the beer pong table. 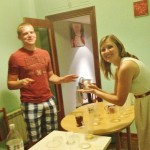 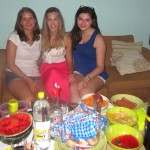 We are proud of our heritage, or at least this small aspect of our heritage. There is, of course, much more than beer pong and vodka watermelon that the United States has to offer to the rest of the world, and our cuisine is infinitely more complex than hotdogs, but there is something comforting in a caricature. Far from home, it is sometimes quite nice to proudly take up the banner mocked by others and, in exaggerating it, make it great.

The United States is a powerful and complex nation. Its people reside in all regions of the globe, and its culture has stretched its influence into even the most remote corners of human existence. Some take issue with this, but for us, it was a beautiful thing to stand together and admire our nation from afar. Pride, homesickness, and even a sense of irony came into play as we belted country music over under-cooked hamburgers, but one thing is certain: each one of us, in our heart of hearts, is proud of our home.