A WHITE HOUSE BLOG REVEALS WHO DR. JILL BIDEN IS! 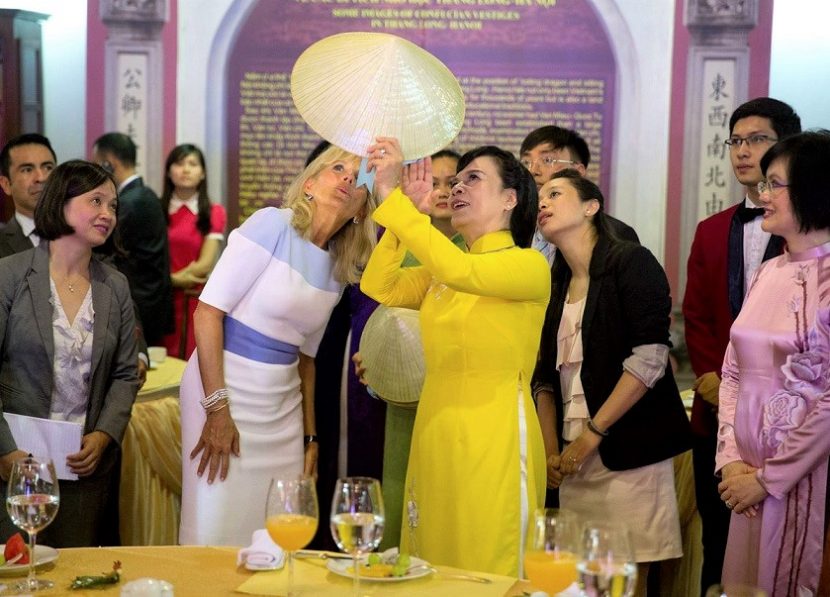 A “frozen in time” biographical sketch from the Obama White House when Barack
Obama  was President of the United States and Dr. Biden’s husband, Joe
Biden,  was Vice President. However, Dr. Jill Biden on Twitter and
Instagram below, which you can click on, are current.

As Second Lady of the United States, Dr. Jill Biden works to bring attention to the sacrifices made by military families, to highlight the importance of community colleges to America’s future, and to raise awareness around areas of particular importance to women including breast cancer prevention, all while continuing to teach English full-time at a community college in nearby Virginia. 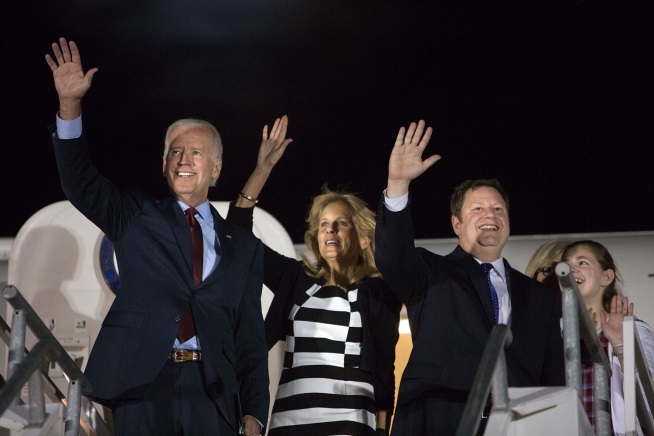 Wife, mother, grandmother, educator and — why not? — traveling Second Lady. Photo shows Dr. Biden with the Vice President, and the new Ambassador to Chile, Mike Hammer, waving from Air Force Two at the Santiago International Airport in March 2014 to start off the Second Couple’s visit to Chile. (Official White House Photo/David Lienemann)

Jill Biden, wife of Vice President Joe Biden, is a mother and grandmother, a lifelong educator, a proud military mom, and an active member of her community. As Second Lady, Dr. Biden works to bring attention to the sacrifices made by military families, to highlight the importance of community colleges to America’s future, and to raise awareness around areas of particular importance to women, including breast cancer prevention, all while continuing to teach as a full-time English professor at a community college in Northern Virginia.

Dr. Biden has always said that community colleges are “one of America’s best-kept secrets.” As a teacher, she sees how community colleges have changed the lives of so many of her students for the better. As Second Lady, she works to underscore the critical role of community colleges in creating the best, most-educated workforce in the world. In 2012, she traveled across the country as part of the “Community College to Career” tour to highlight successful industry partnerships between community colleges and employers. In the fall of 2010, she hosted the first-ever White House Summit on Community Colleges with President Obama, and she continues to work on this outreach on behalf of the Administration – frequently visiting campuses, meeting with students and teachers, as well as industry representatives around the country. [Watch video.] 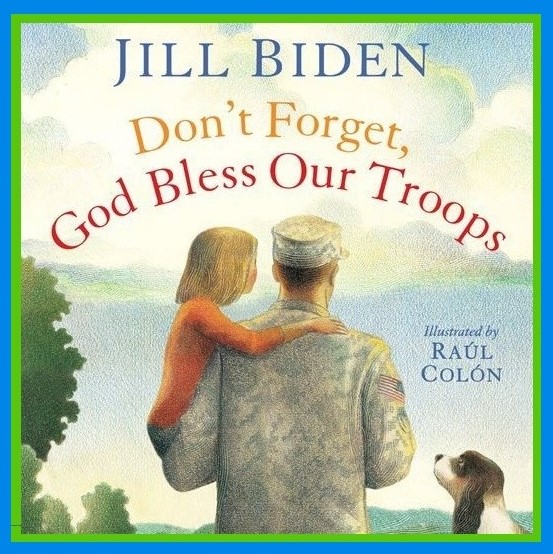 As a military mom, Dr. Biden understands firsthand how difficult it can be to have a loved one deployed overseas. Dr. Biden’s children’s book – Don’t Forget, God Bless Our Troops – was released in June 2012. Inspired by real-life events, the book tells the story of a military family’s experience with deployment through the eyes of Dr. Biden’s granddaughter, Natalie, during the year her father is deployed to Iraq. The book also includes resources about what readers can do to support military service members and their families. 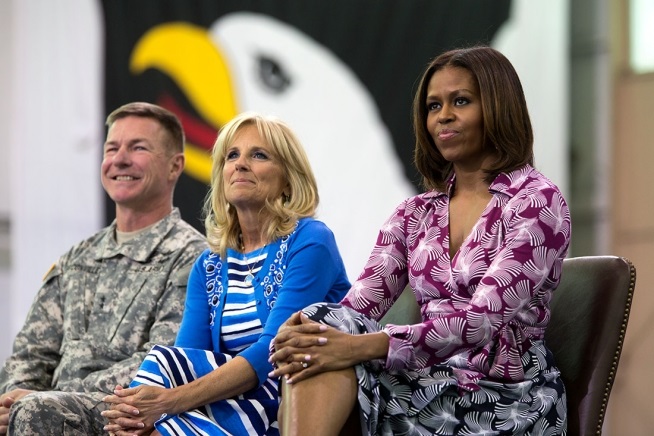 Through their Joining Forces initiative, First Lady Michelle Obama and Dr. Biden have issued a national challenge to all Americans to take action and find ways to support and engage our military families in their own communities. Joining Forces aims to educate, challenge, and spark action from all sectors of our society – citizens, communities, businesses, non-profits, faith-based institutions, philanthropic organizations, and government – to ensure that service members, veterans, and their families have the tools they need to succeed throughout their lives. At JoiningForces.gov, Americans can find many ways to take action.

In 1993, after four of her friends were diagnosed with breast cancer, Dr. Biden started the Biden Breast Health Initiative in Delaware, which has educated more than 10,000 high school girls about the importance of early detection of breast cancer. Dr. Biden and the Vice President have also served as the Honorary Co-Chairs for the Global Race for the Cure in Washington, D.C. As Second Lady, Dr. Biden continues to stress the importance of breast cancer research and early detection. 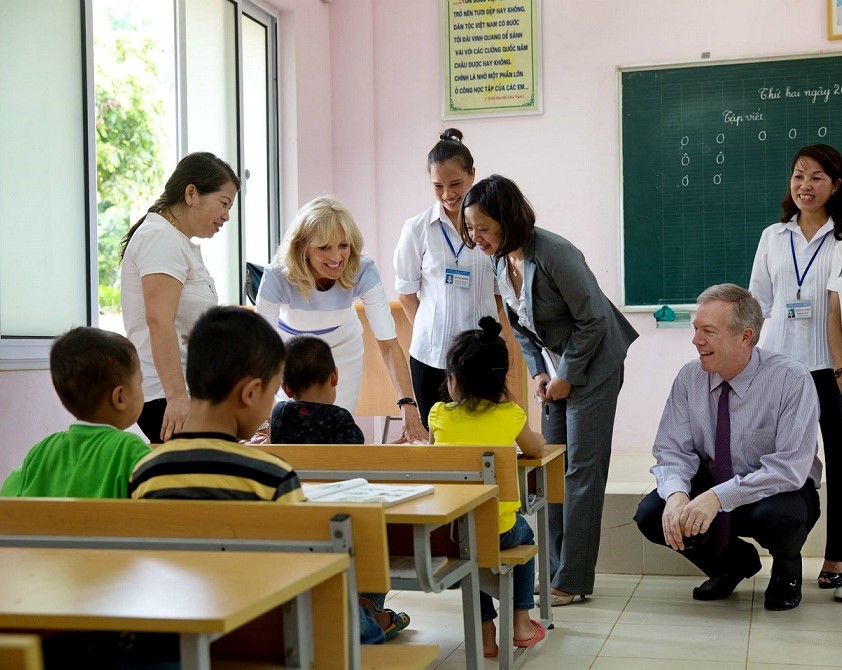 Dr. Biden talks to pupils at the Ba Vi orphanage outside Hanoi, on her trip to Vietnam, July 2015. (Official White House Photo/David Lienemann)

Dr. Biden has been an educator for more than three decades. Prior to moving to Washington, D.C., she taught English at a community college in Delaware, at a public high school and at a psychiatric hospital for adolescents. Dr. Biden earned her Doctorate in Education from the University of Delaware in January of 2007. Her dissertation focused on maximizing student retention in community colleges. She also has two Master’s Degrees — both of which she earned while working and raising a family. 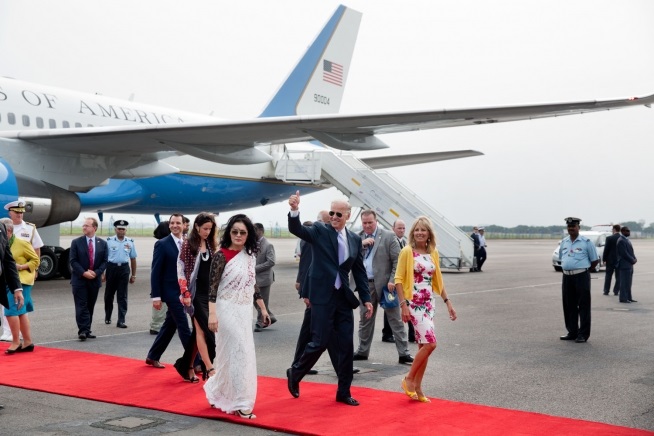 Vice President Joe Biden and Dr. Jill Biden are photographed with their daughter Ashley and son-in-law Howard Krein on their visit to India. Photo taken on their arrival at the Indira Gandhi Internationa Airport in New Delhi, July 2013. (Official White House Photo/David Lienemann)

Jill and Joe’s daughter, Ashley, is a social worker and Executive Director of the Delaware Center for Justice; their son, Beau (1969-2015), was a lawyer, former Attorney General of the State of Delaware, and a Major in the Delaware Army National Guard; and the Bidens’ other son, Hunter, is a lawyer and Chairman of the World Food Program USA. They have a son-in-law, Howard, two daughters-in-law, Hallie and Kathleen, and are the proud grandparents of five incredible grandchildren: Naomi, Finnegan, Maisy, Natalie, and Hunter. The oldest of five sisters, Jill Jacobs was raised just outside of Philadelphia in Willow Grove, Pennsylvania by Bonny and Donald Jacobs, both of whom are now deceased.

Copyright Policy
Pursuant to federal law, U.S. government-produced materials appearing on the obamawhitehouse.archives.gov/ are not copyright protected.
Except where otherwise noted, third-party content on the site is licensed under a Creative Commons Attribution 3.0 License. Visitors to the website agree to grant a non-exclusive, irrevocable, royalty-free license to the rest of the world for their submissions to Whitehouse.gov under the Creative Commons Attribution 3.0 License.

Editor’s note
Photo captions and the title of this article are supplied by Guidepost.

Previous article « JAZZ MADRID 2020: LEAVE YOUR FEARS BEHIND AND LET THE MUSIC FLOW