WHAT TO DO IN THE EVENT OF SCARCE COVID VACCINE: GO FRENCH? 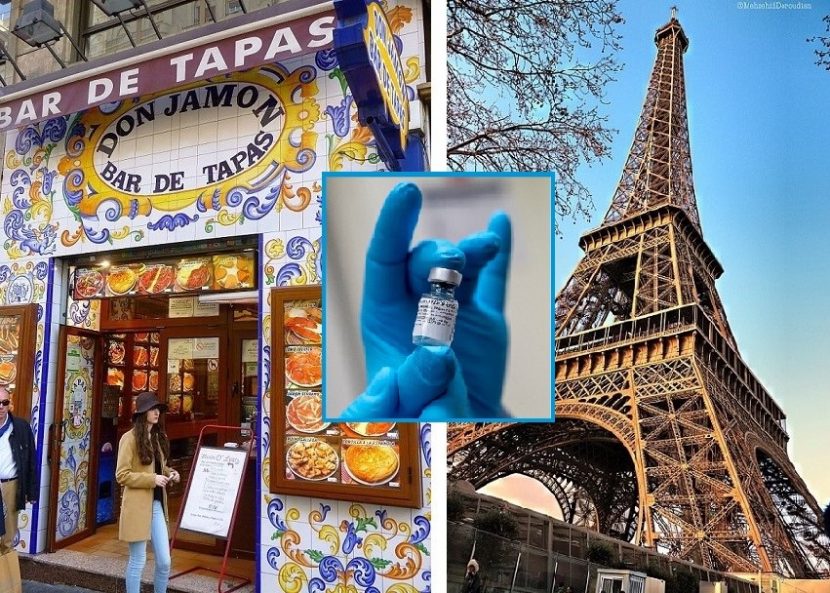 Politicians are wont to resort to confinement to fight COVID-19. But how about
the vaccines whose supply is stalled. Due to suspicious reasons?
People can’t take more confinement. The French come
to Madrid , which has become an “oasis” of
“permissiveness”, for a weekend relief.

In Spain, and presumably in most other places on this ailing planet, the politicians are stuck with confinement as a handy antidote to the accursed pandemic. One day certain towns, and even just barrios (neighborhoods), are the subject of “perimetrically” restricted movement. The next day, it’s the other barrios across the street. Things improve marginally. And the inhabitants are let go. But things invariably get worse after a while and they’re confined again. Some politicians suggest that people mustn’t wait for the government to decree confinement. Just do it!

But how about the vaunted COVID19 vaccines? Shouldn’t they play a role, even bigger than confinement? 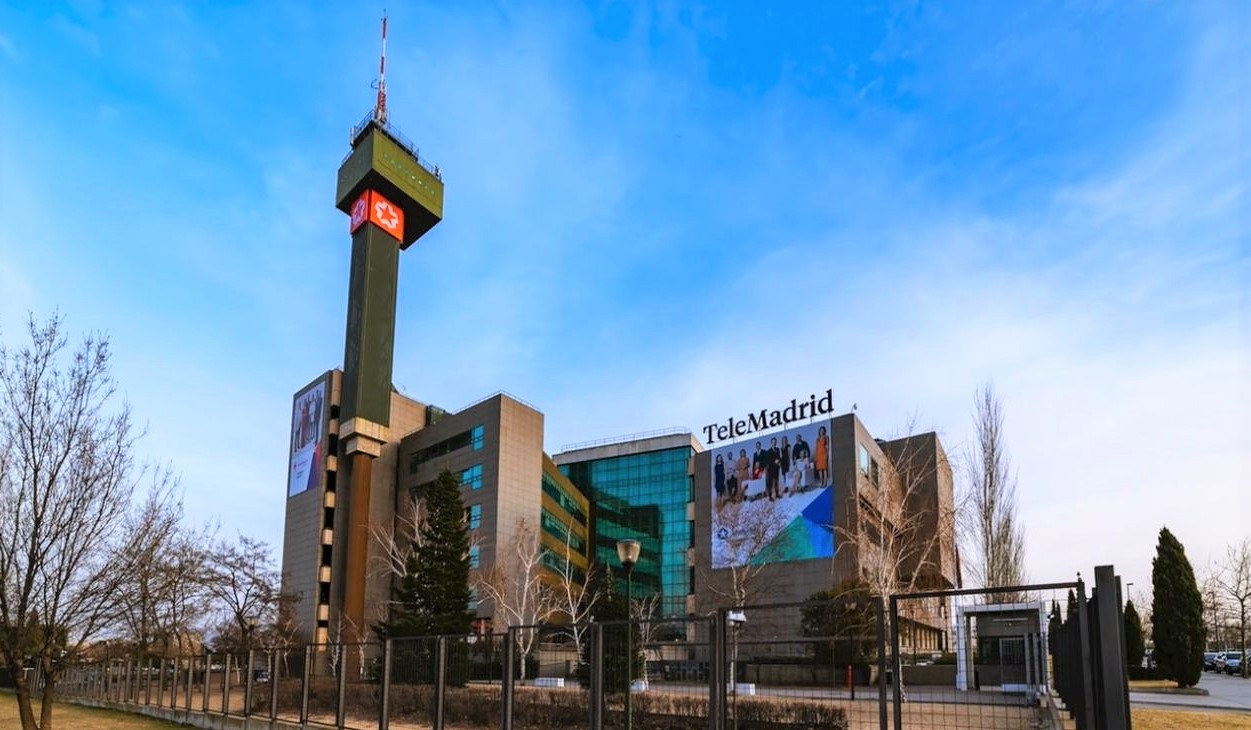 Public TV network TeleMadrid: the feud between the EU and AstraZeneca gets ample coverage in the media

These days much is being made in the media of the feud between Oxford AstraZeneca and the European Union.  On 22 January 2021, the pharmaceutical company announced that due to low yield from cell cultures at its large Novasep plant in Belgium, it can only initially supply 31 million doses of its vaccine to EU countries, as opposed to the previously envisaged 80 million. To make matters worse, AstraZeneca announced that the vaccine would be delivered in March, two months behind schedule. (This Sunday, 31 January, EU’s executive arm, the European Commission, announced that the pharmaceutical company has agreed to add 9 million doses more.)

In his own defense, Astra-Zeneca CEO Pascal Soriot says that his company does not have to go by a fixed schedule, the delivery of its vaccine being governed by the “best-effort” clause of the AstraZeneca-European Commission contract. But the Commission says: “”In return for the right to buy a specified number of vaccine doses in a given timeframe, the Commission finances part of the upfront costs faced by vaccines producers in the form of Advance Purchase Agreements (APA).”

Per the Advance Purchase Agreement (APA) that the European Commission signed with AstraZeneca, the former is entitled to purchase 300 million doses, with an optional 100 million more. AstraZeneca is actually one of various drugmakers with whom the Commission has an APA. The EU has disbursed €2.7 billion ($3.8 billion) for the advance-purchase scheme. Three-hundred thirty-six million euros ($408 million) of this went to help finance the production of  AstraZeneca’s vaccine. 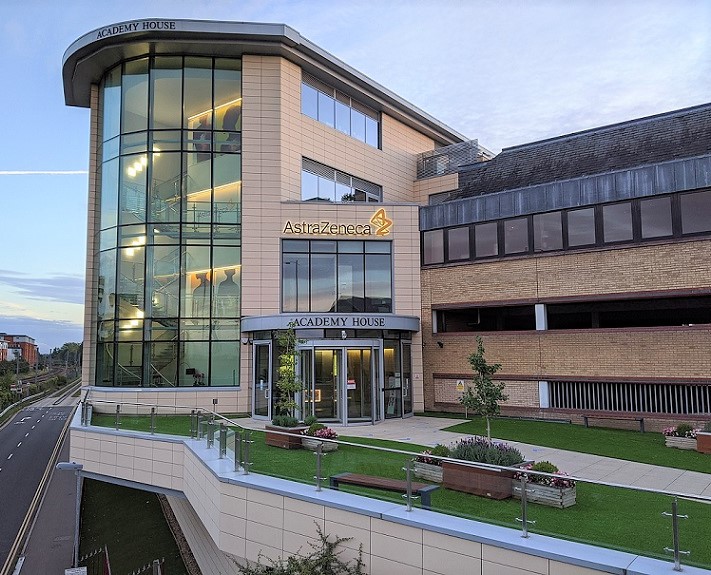 The AstraZeneca corporate HQ in Cambridge, UK: the EU suspects that the doses meant for EU countries have been diverted to the UK

Upon being informed of the shortfall, the Commission brandished the so-called “vaccine export transparency mechanism″ to block the export of the Astra-Zeneca shots produced on EU soil (at the four plants in Belgium, the Netherlands, Germany and Italy) to non-EU countries. This is a company-specific export ban prompted by EU’s suspicion that the doses meant for EU countries have been diverted to the UK where AstraZeneca has two company sites.

So now the shipments are stalled; Pfizer, too, has announced that it will not only not be able to meet the schedule but also the quantity of the doses. In Spain, as a result, inoculation is being slowed down if not entirely on hold in certain places.

Europe is practically back to the “old normal” of confinement, masks, etc. as the achievement of vaccine-induced herd immunity by Spring is fast dissolving into a pitiable figment of collective imagination. Face with this, and the struggle against the raging third wave of COVID-19, people across Europe are about to reach the limit of their endurance. It’s been a year, after all, since the terrible corona has been unleashed on them.

Some French people seem to have found an answer. 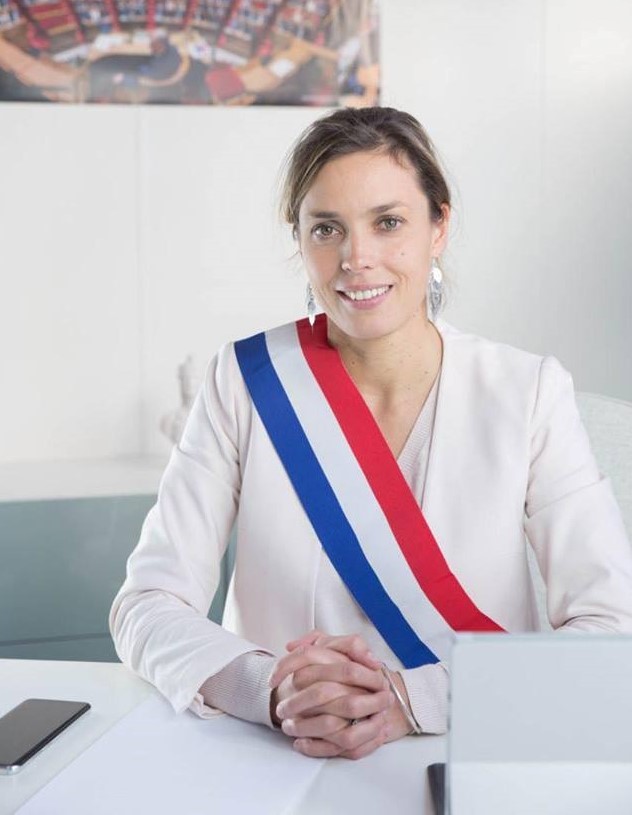 Not all confinements are the same everywhere, obviously. The French are all but cracking up under a 6 PM to 6 AM curfew. Seemingly not quite satisfied with the harsh measure, the French government is considering another lockdown, the third in one year, as the country fights for survival against a mutating virus that’s  “spreading faster every week,” according to the French Solidarity and Health Minister Olivier Véran and quoted in FRANCE 24.

But the French “can’t take it anymore,” says Caroline Janvier, an En Marche MP from Loiret “We sense that people are much more anxious, that they are tense and stressed, especially small shopkeepers who are afraid of not surviving a new lockdown similar to that of spring 2020. But more than anger, I see problems related to mental health, problems of depression and isolation, especially among the elderly.”

Emmanuel Macron’s government knows that social acceptance of the restrictions is crucial. And yet poll numbers show that acceptance is diminishing at an alarming rate. During the first lockdown in March 2020, acceptance was 85%, 65% in the second lockdown. Forty percent if the third lockdown were implemented now.

Naturally, the French have been looking around for a means to alleviate their distress. “Various French media” have noted that in the midst of the restrictions on leisure and entertainment common to most European countries, Madrid is an “oasis”, according to Antena 3 Noticias. As a result, “thousands of Frenchmen” come to the Spanish capital every week for a respite.

TF1, France’s most popular domestic TV network, observes that in Madrid “practically everything is open”, ignoring the fact that since 25 January, the hospitality establishments close at 9 PM. The curfew is set between 10 PM and 6 AM.

The French tourists have this impression that one can live a life that is “practically normal” in Madrid, notes Antena 3 Noticias. They find that there is a great difference between life in France and life in the Spanish capital. They don’t seem to be cowed by the awful statistic of 1000 COVID cases per 100,000 Madrileños either.

That the French tourists have rediscovered Madrid, this time as an oasis, was such a piece of good news for the ailing hospitality industry it got a star billing in the Saturday newscasts. 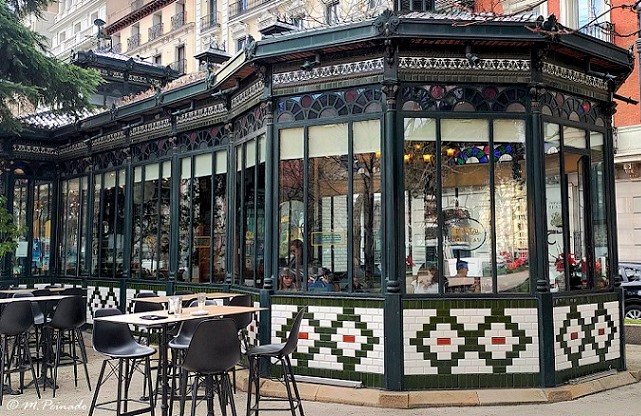 The empty terrace of an iconic restaurant on Paseo de Recoletos in Madrid: COVID-19 brought home the stark reality that without the massive tourist turnout the hospitality trade in Spain could go kaput

The COVID-19 brutally brought home the fact that the disappearance of the millions of tourists, whose visit in droves used to be taken as a matter of course, is the ruination of the hospitality businesses in Spain. Still, the news of their return under the circumstances was not unanimously welcome. Some talk show guests during the weekend were giving out dire warnings: An airtight confinement must be enforced. A seriously drastic confinement – the kind effected last Spring where the entire country was converted into an eerie ghost town. Not half-measures. Otherwise, Spain will just be prolonging the agony and never beat the pandemic. It’s bad news when tourists, local and foreign, see Madrid as a place to relax. 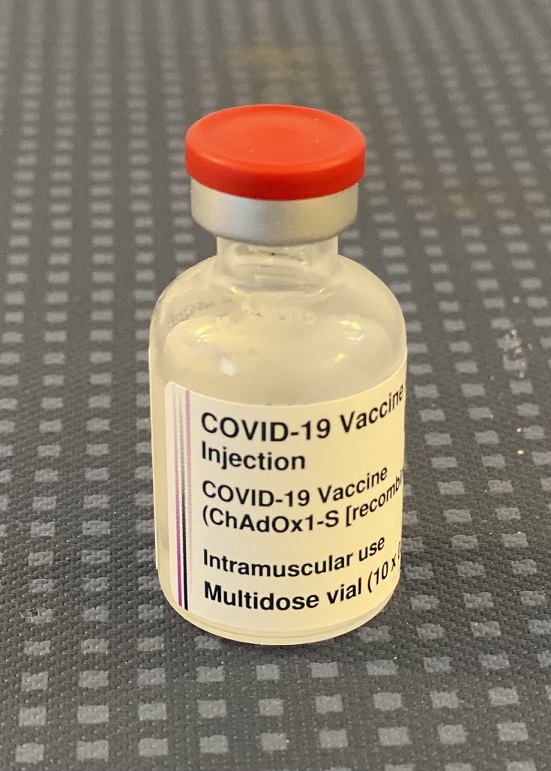 AstraZeneca COVID 19 vaccine vial (UK): Give everyone a shot in the arm

This is quite an extreme position. How about everybody coming together right now, instead, to give one and all a shot in the arm? The vaccine is there. Don’t let avarice and dirty politics get in the way.

Advice for Foreign Nationals in France

Video of the first lockdown in Paris 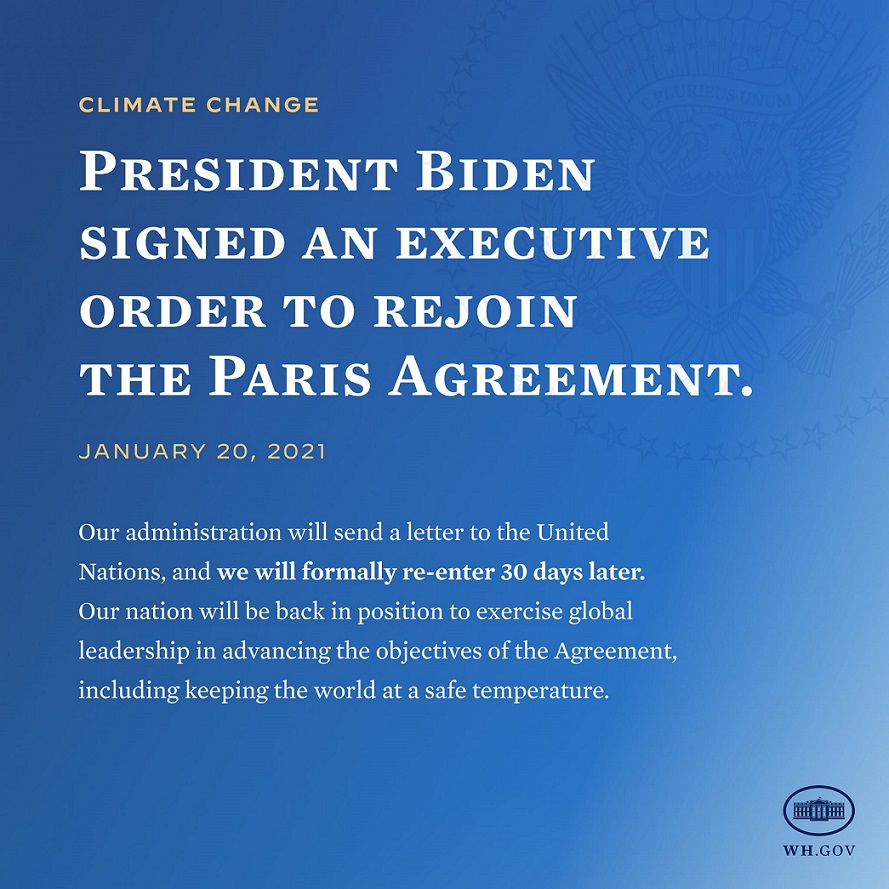 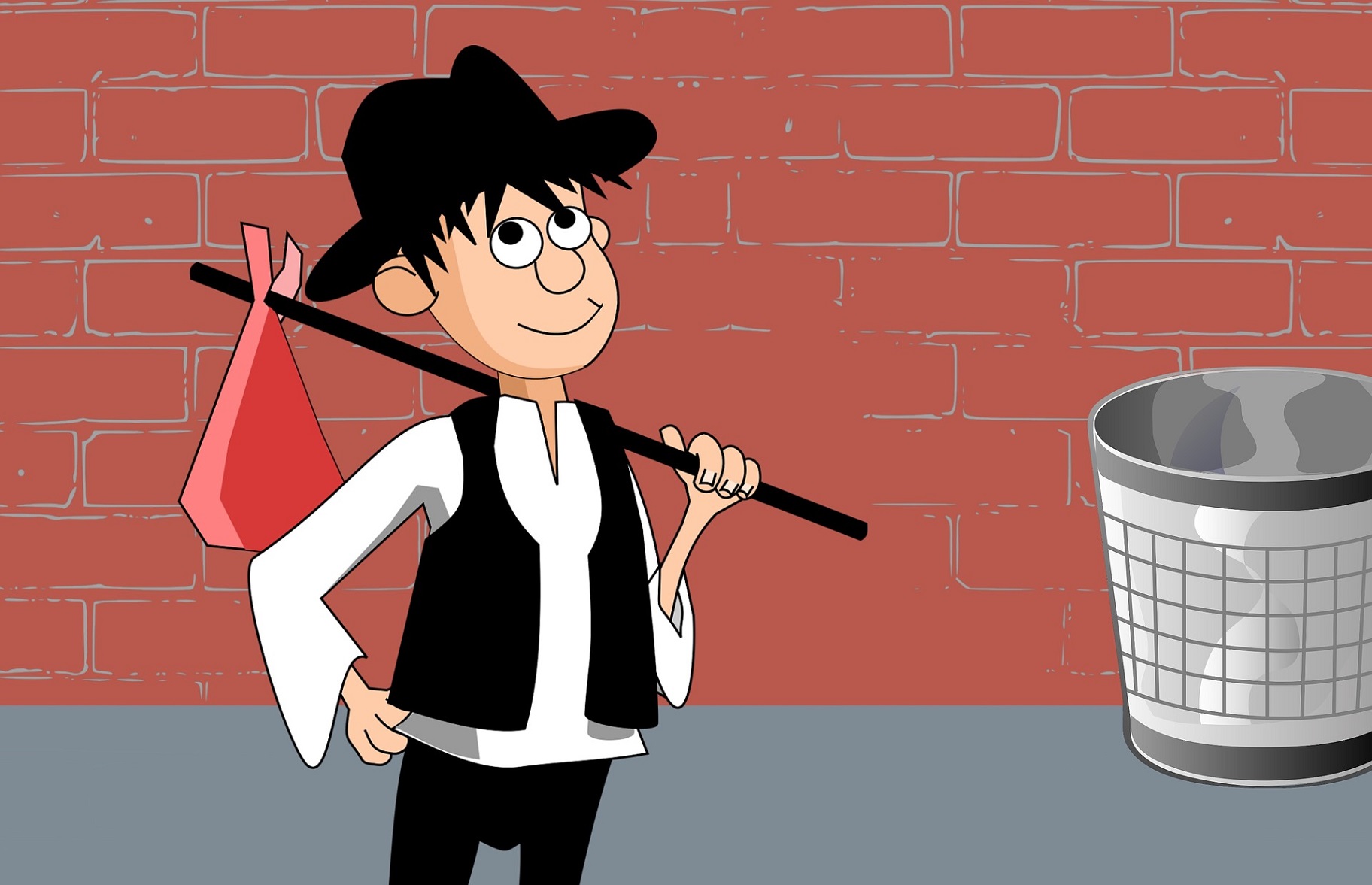 Next article DETERIORATING HEALTH, LOSS OF LIVELIHOOD, AND NATURAL DISASTERS THREATEN THE LARGEST NUMBER OF PEOPLE ACROSS THE GLOBE »