“WEEKEND IN SALAMANCA”
by B.D.
First published in GUIDEPOST
29 October 1965

An ideal spot for the now-and-then traveler who has a weekend to spare and an itch for
distance, Salamanca exudes the architectural interest of Centuries.

If the province of Cáceres preserves the architecture and atmosphere of medieval Spain, Salamanca, the province just to the north, is the keeper of Renaissance Spain. On a flat, barren tableland north of the mountains which divide the two areas lies the capital, the city of Salamanca. Ancient even as Spanish cities go, the city was of importance as early as 222 B.C., when the Carthaginian Hannibal added it to his country´s Iberian colonies. Later, like nearly every other city on the peninsula, it passed through Roman and Moorish hands. But little of that remains. The 15th and 16th Centuries left the greatest mark.

Ideal for a weekend visit from Madrid, Salamanca is reached in a not-unreasonable four-hour drive. Leaving on Friday evening one may run into hotel difficulties, though an early departure on Saturday leaves time enough for seeing things. 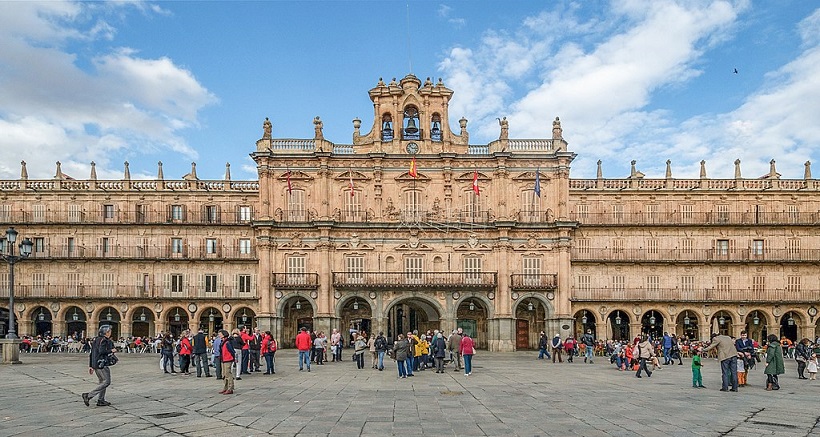 Active Baroque And Elegant Gothic. Your Saturday morning stroll should begin in the Plaza Mayor. . . It is considered the most perfect and attractive main square in the country. Begun in 1729 during the reign of Felipe V and only finished in 1755, it is a brilliant reflection of its age, a refined but active baroque which casts a thousand of narrow shadows in the early morning sun. It was designed by the most famous Spanish architect of the epoch, Churriguera. . .

From here we can exit toward the river. . . , keeping to the south until we arrive at the large Plaza de Anaya where the huge cathedral stands. . . Started in 1513, it was laid-out in the then outmoded Gothic tradition to which it owes its slender, elegant lines. Within, there is a feeling of space and an exceptional amount of light to aid in distinguishing this from other Spanish churches. . . The capilla dorada is probably   the finest of Juan de Alava´s work; the choir. . . shows Churriguera in a more typical example of his personal baroque. 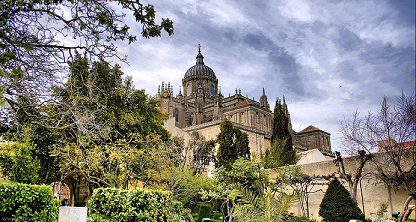 The reason for calling this the “New Cathedral” is simply because the Old Cathedral, built in 1100, still exists. . . The older church is much smaller and offers a much different atmosphere. Here the major feature is the high altar, a collection of fifty-odd paintings of Nicolas Florentino, and the tempera painting of the Last Judgement, by the same artist, which lines the vault. In the cloisters. . . are more interesting crannies, chapels and rooms which line an attractive patio. The Santa Bárbara, or Degrees´ Chapel, is the one in which doctoral candidates at the university were locked when undergoing final examinations. 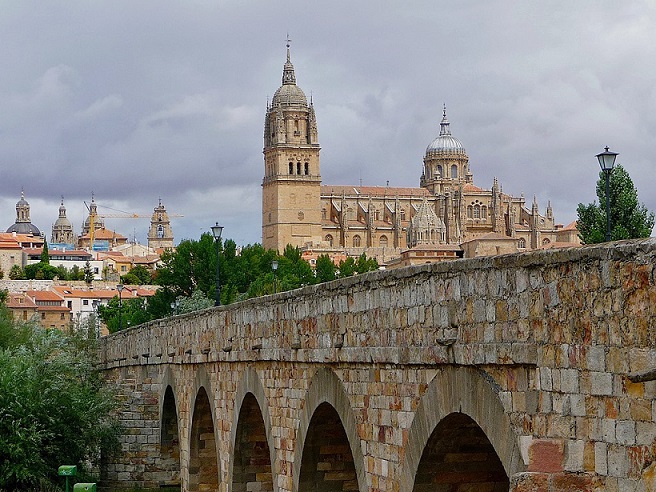 From the Cathedral, cross the Roman bridge (in the photo) for local color

Over The River. Leaving the church and walking around its west end. we find ourselves on the slope of the river, and heading. . . toward the Roman bridge. Take care where you step, for there will probably be a number of local farmers driving livestock down the street. And stop before you get there to look at the stone “bull”. . . which stands on a pedestal before the bridge. This refugee from Celtiberian times has a literary fame as well as archeological, playing an early role in the Spanish classic Lazarillo de Tormes. As the little Lázaro is leading his blind man from the city, he is told to put his ear to the bull and listen. His obedience is rewarded with a near concussion as the old man teaches him his first and most important lesson—never trust anyone.

Crossing the bridge is a delight for the person who travels for people, because it throws him right into a narrow stream of Salamancan types, which he can study at leisure. Those who search for local color may also enjoy themselves simply by looking over the edge, where the women are busily washing their clothing in the shallow river and spreading things out to dry on the grass. 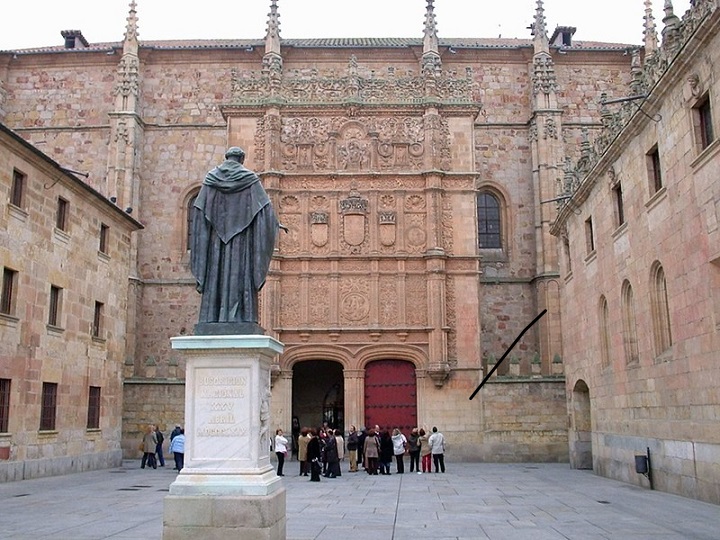 University of Salamanca with the statue of Fray Luis de Leon, outstanding alumnus and professor. He obtained, for life, the chair of Moral Philosophy, and was elected to the most significant chair in the university, the Chair of Holy Scripture

At the end of the bridge is the regular Saturday morning horse and burro market. Here, among clouds of dust and crowds of Gypsies, trading for the week goes on in the old tradition, and. . . the scene is a highly animated one.

Back across the bridge and up the hill with a twist to the left, and we find ourselves on the tightly-packed campus of the University of Salamanca. This is, in fact, not one university, but three: the “Literary” (“Civil”), with Faculties of Philosophy and Letters, Science and Medicine, and Law; the Pontifical, with Theology, Philosophy and Canon Law; and the Dominican, with a Faculty of Theology only. The Civil is the oldest, founded in 1223 by Alfonso the Wise and endowed with his own huge library of 100,000 books and manuscripts. By the 14th Century this school was ranked second only to that of Paris, and by the 16th Century a total of seven thousand students from all over the world attended classes there.

Tales Of Academic Horror. There are many great names associated with Salamanca´s University. Fray Luis de León, one of the country’s great poets taught there in the 16th Century, distinguishing himself as well with a famous anecdote. Imprisoned by the Inquisition on charges which were eventually proved false, he returned to his classroom duties after five years and began his lecture with the phrase “As we were saying yesterday…” Another famous member of the faculty was the 20th Century philosopher Miguel de Unamuno. A professor of Greek, he devoted his time to the development of a philosophy related to that of Kierkegaard. His point of view is best expressed in his classic Del Sentimiento Trágico De La Vida. 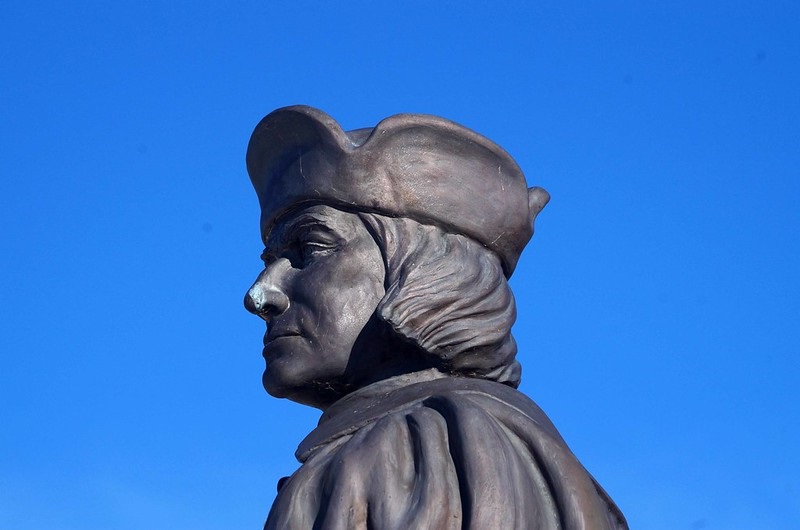 Columbus: He was turned away by the University because his plan was “vain, Impracticable, and resting on grounds too weak to merit the support of the government”

Columbus is another great name connected with this illustrious university, but the story does little credit to the school. The Faculty of Astronomy and Mathematics was one of the first places visited by the ambitious explorer in his search for funds and support, but he was turned away with the recommendation that his plan was “vain, Impracticable, and resting on grounds too weak to merit the support of the government.”

For a modest sum, you may be whisked about the buildings and exposed to their historical significance, sitting in well-worn wooden benches and told tales of horror about the academic traditions of other times.  . . 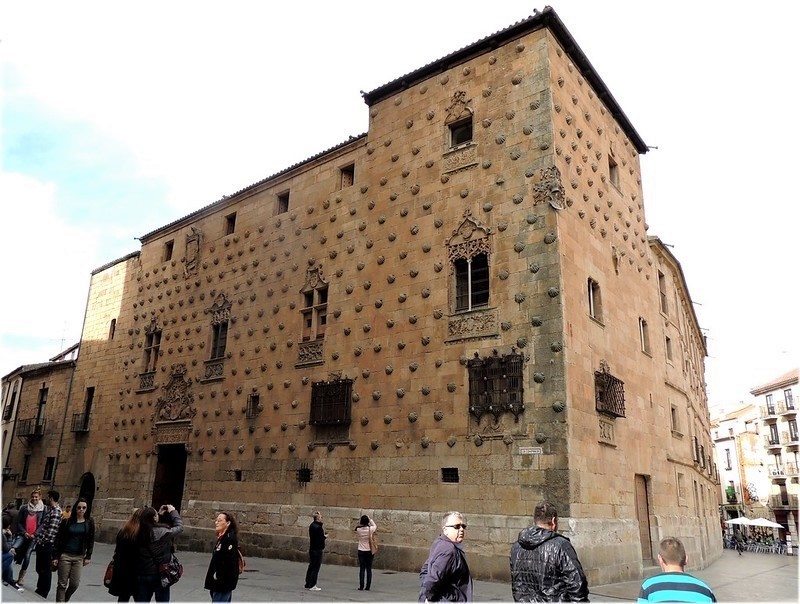 Last stop is just a little further up the calle Libreros, another house with a distinctive feature. The Casa de las Conchas is so-called for its unusual and attractive façade, symmetrically studded with carved stone shells. . .  [It] is not exactly spectacular, but as a sample of simpler Renaissance architecture, an interesting stop.

Up calle Compañia and around the corner and we are back within hailing distance of the focal Plaza Mayor. The tour is over and everyone is free to browse. To the immediate west, you might be interested in the Monterrey Palace or, further over, in the Irish College, . . . once a major center for the training of Irish priests;  to the north, the. . . house in which Santa Teresa lived. 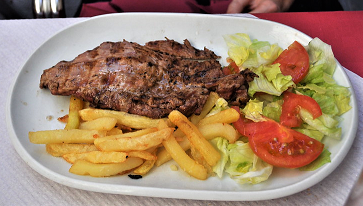 Time For Lunch. Those visitors who feel that meal-time is too close to begin new explorations might as well rest at one of the cafes in preparation for lunch. Not wishing to discourage, we must, nevertheless, note that Salamanca city and province, has no distinctive cuisine, but follows the lead of Castile; garlic soup a la Asmesnal is perhaps the most distinctive dish of the region. . . Among the more recommendable restaurants are the Regio, at Zamora, 9, and the reasonably inexpensive El Mesón, right by the south-east corner of the Plaza Mayor in the Plaza del Poeta Iglesias.

Related post: The First University & One of the World’s Oldest Universities in Continuous Operation in Spanish 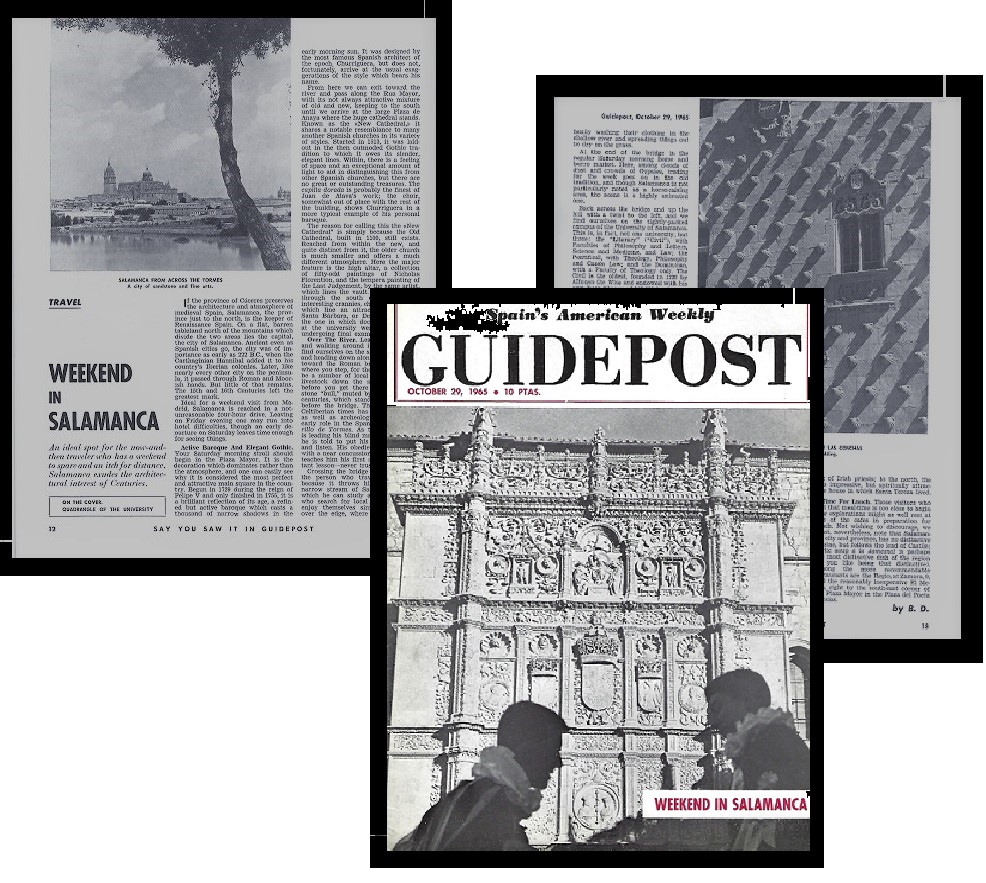 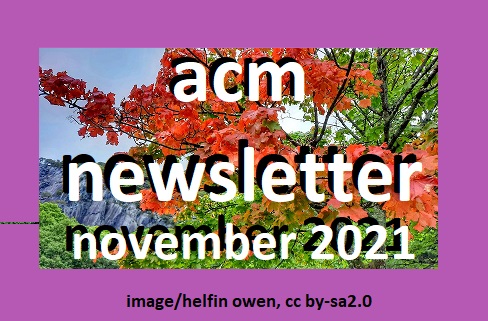 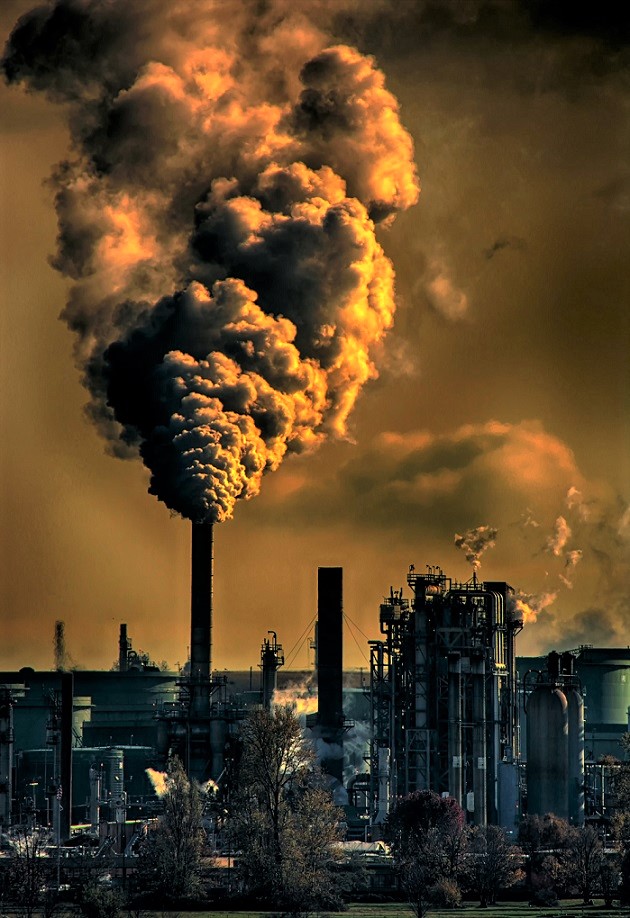 Next article A SECOND OPINION: Is Climate Change for Real? »