Ten minutes away from Malaga Airport by train, which runs every 20 minutes, Torremolinos enjoys one of the best climates in Europe. It would since it’s on southern Spain’s Costa del Sol (literally Coast of the Sun). Mild winters with occasional heavy rainfall. Long dry summers during which the town enjoys cool sea breezes from Africa which, unfortunately, also means a fair amount of Sahara dust. Temperatures hover around 30ºC then.

Torremolinos nowadays would be almost nothing if not an appealing resort with an inexhaustible source of entertainment, not least in its nightlife which tends to get disco-hectic at the height of the season. But isn’t that what the young look for in a summer holiday?

The visitors will find that it has a WIDE range of hotels, restaurants and forms of entertainment ranging from events for the fun-crazed to families with little kids and lots of other stuff in between. 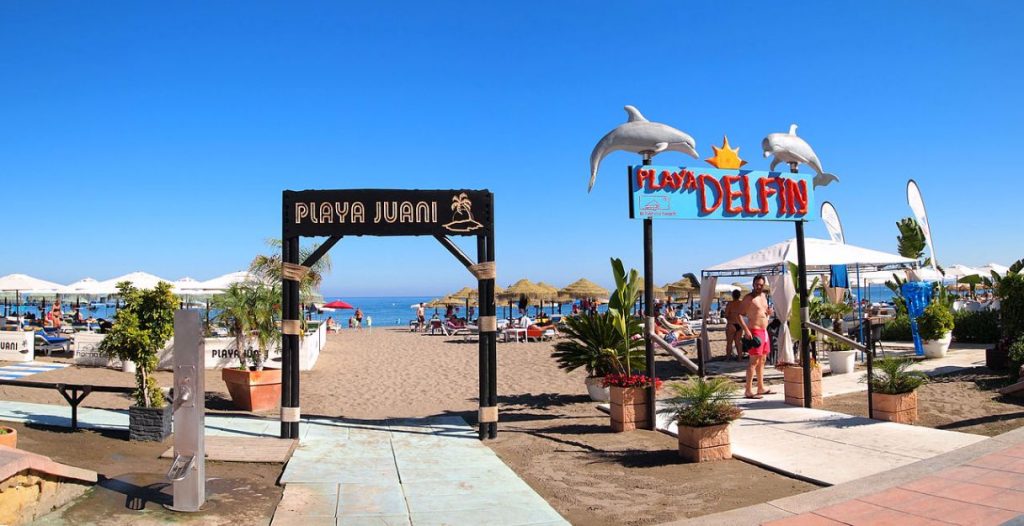 Boasting nearly 8 kilometers of sandy beach, Torremolinos could get packed with holidaymakers. The most popular beach areas are Playamar, Los Alamos, La Carihuela and El Bajondillo.

Looking for “what once was”? Delightful Carihuela, the largest beach in Torremolinos, could be your best bet. Simple houses and old cottages draped with bougainvilleas are tacked away but not too far away to be unseen. True to its origins as a fishing village, you’ll find excellent seafood restaurants and beach bars in the old Carihuela area. 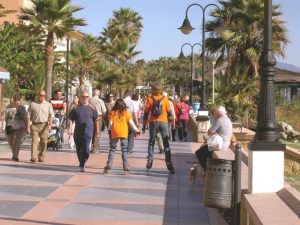 PROMENADE. Any coastal town worth its salt will have its Paseo Maritimo (seafront promenade). Torremolinos’s is fully illuminated and equipped with bike and skating lanes. Expect a good number of chiringuitos (beach bars) along the promenade. As one visitor observed to his delight, “Every 25 or 30 meters, there’s a chiringuito.”

Torremolinos was the first Costa del Sol resort to be developed (the late and early sixties, see “GUIDEPOST REPRINT: ‘Reading For a Summer Day'”). Before then it was hardly more than a poor sleepy village. Not that with the influx of tourists it has morphed beyond recognition. Today several of the traditional fresh fish bars rub elbows, so the speak, with exclusive boutiques in the town center, affording glimpses into the town’s past. This is especially true on the small but beautiful San Miguel Street, with its small shops, boutiques and cafes, giving the visitor an idea about how, many years ago,  Torremolinos was just a small fisherman’s domain. This hub of tourism activities charms and entertains visitors of every imaginable nationality. Some claim that the pedestrianized street has one of Europe’s densest visitor traffic. 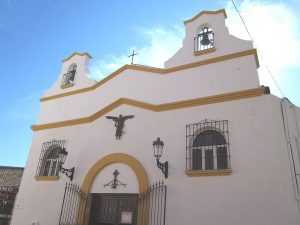 San Miguel Street ends abruptly on Cuesta del Tajo but not before sheltering the eighteenth century San Miguel Parish Church. The end is a steep flight of steps that leads to the old picturesque fishing district of El Bajondillo with its market-style souvenir kiosks and the wide sandy beach at the bottom, dotted with shady palm trees for relief from intense summer sunshine. No chiringuitos for you? Well, you can just picnic in the shade! 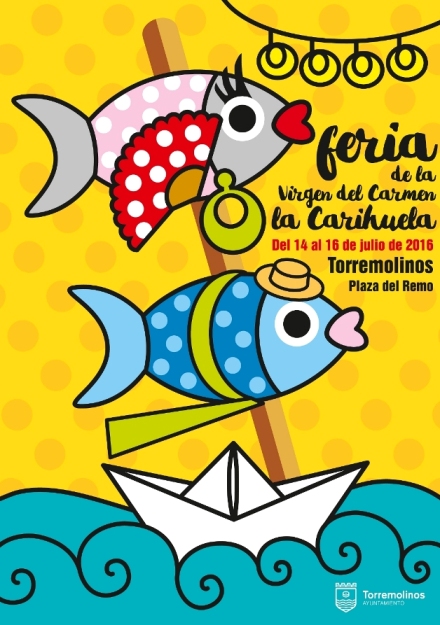 A poster of the Feria del Carmen

> Summer Cinema. Films for the whole family on the beaches 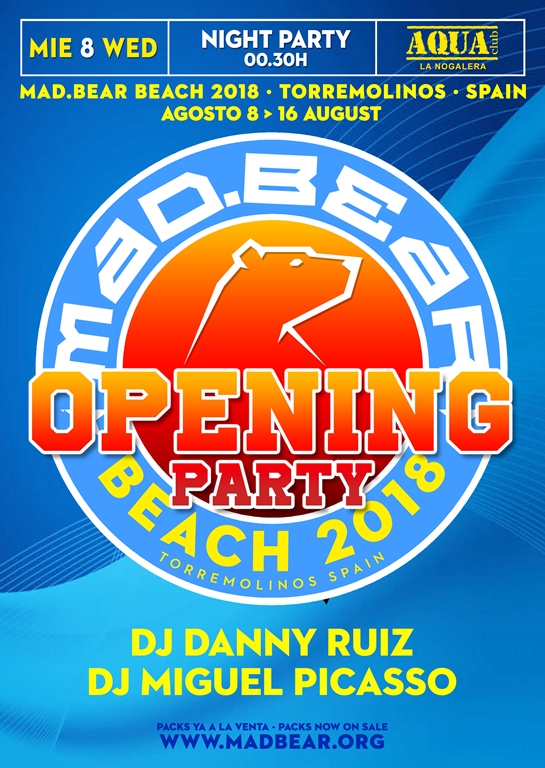 > The annual Flamenco Festival, one of the oldest in the province, featuring Flamenco talents. Throughout the month.
> Mad Bear Beach Festival, 9 – 16 August, one of the most important gay bear festivals in Europe. In pubs around Plaza La Nogalera.
> Torroles sound musical event, 12 – 26 August.

> Tourist Day: Tribute to tourists who, from the 1950s, have enabled Torremolinos to pioneer in tourism along Costa del Sol. Venues: downtown and the beaches of Bajondillo, La Carihuela, and Playamar. Folk performances and gastronomy. First Thursday of September. 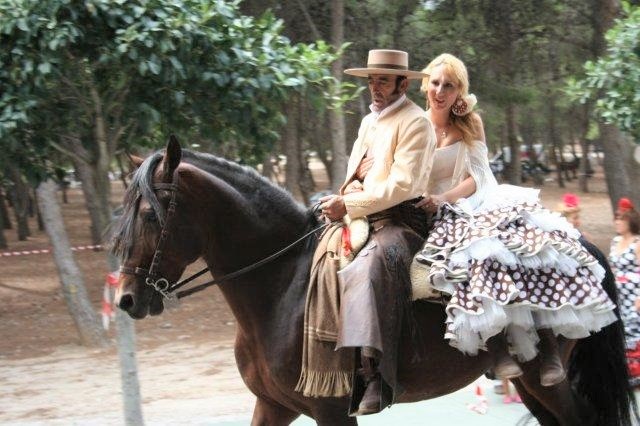 Previous article « MADO IS BACK! (Not That It Has Ever Left) 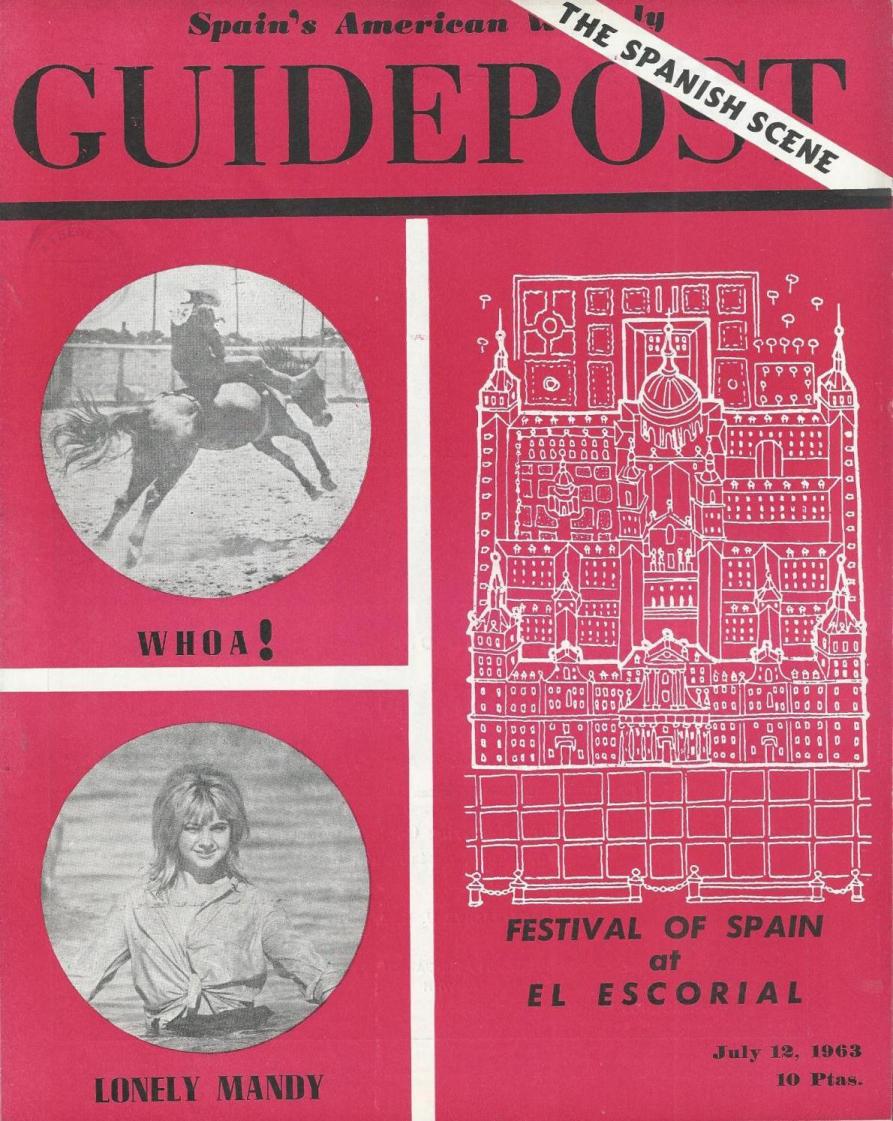