THE SECRET BEHIND THE SUCCESS OF LA GRAMOLA DISCOS

Success is often mixed with sorrow, sacrifice and regret. Follow me to listen to an American expatriate’s success story in downtown Madrid. Just walk perpendicular from Calle Gran Via and continue down Calle del Postigo de San Martin, 4. Pass the Rodilla on the corner, and spot on your left ahead the yellow awning of La Gramola Discos, a shop no vinyl audiophile could resist. There we’ll meet its owner Maria Gutiérrez Fernández who, despite some trials and sorrows, could not be happier with her family today. 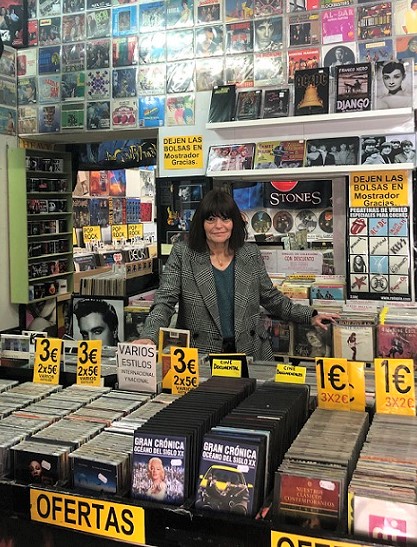 Born in East Chicago, in high school Maria was a candy striper at a hospital where she kept files by hand, made beds, served iced water and played cards with adult burn patients. She wanted to become a nurse to help people.

Lorenza, Maria’s Spanish mother from Jaén, met Philip, an American soldier who served overseas during WW2. They married and relocated to Chicago. When Maria turned 13, she visited her mother’s family in a Madrid neighborhood then considered ‘Vallecas.’ On that trip she met her future husband, Jose Antonio, a David Cassidy look-alike.

After graduating high school, Maria, who was then 17, moved to Spain and married Jose Antonio around 21 years of age. She sacrificed her dreams of becoming a nurse in exchange for love in Madrid, and yet the urge to serve others remains with her to this day.

In the beginning, Maria worked as a babysitter while her husband had a job with a furniture company. But when his company relocated elsewhere, Jose Antonio stayed in Madrid to start a record shop with Maria –which was a perfect enterprise for a couple who shared a passion for music. 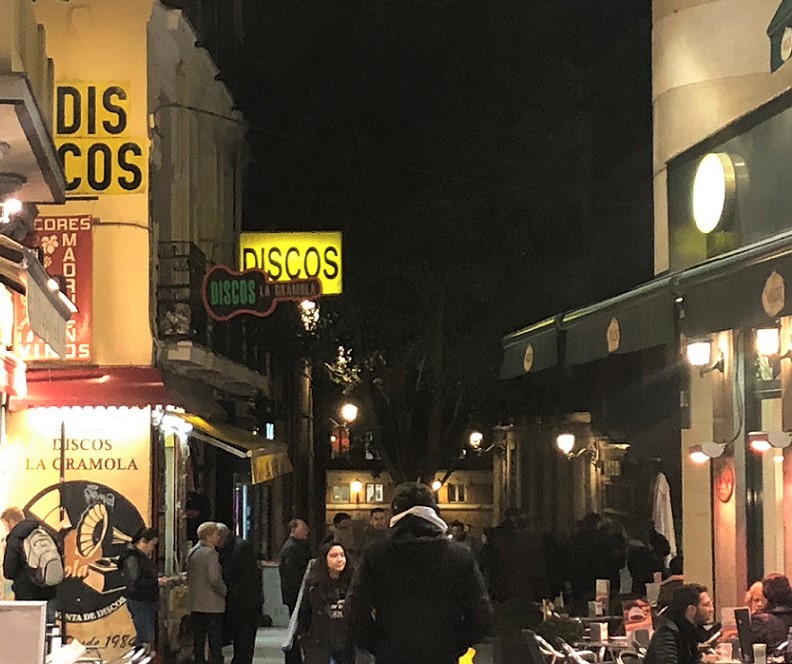 Maria, on husband Jose Antonio: “He could sell records like churros.” (Incidentally, that’s a churro shop to the right.)

“He could sell records like churros,” Maria said. But when it comes to preference Jose Antonio enjoyed Bobby Vinton, Blue Velvet and 50’s Rock. Maria, on the other hand, has an eclectic taste. She remembers as a child that her parents enjoyed Credence Clearwater Revival, Johnny Cash and The Rolling Stones, but her neighbor, Cynthia, expanded her tastes to include soul, gospel and funk.

The couple’s first shop opened by Puerta del Sol on Montera Street in 1984, during the countercultural movement, ‘La Movida Madrileña’. Starting their business was tough because the store was four times larger than today’s 40 square meter La Gramola and, therefore, quite a handful. The couple ran the business, putting in overtime to buy more music to sell, while raising four kids.

Maria remembers how vacations back home in East Chicago felt more like work than rest. The family traveled up the city in Evanston to buy stacks of records that they would fit in their carry-on luggage bags. While the kids were growing up in the mid 90s, Maria and Jose Antonio opened several stores. At their most ambitious time they ran five record shops at once! 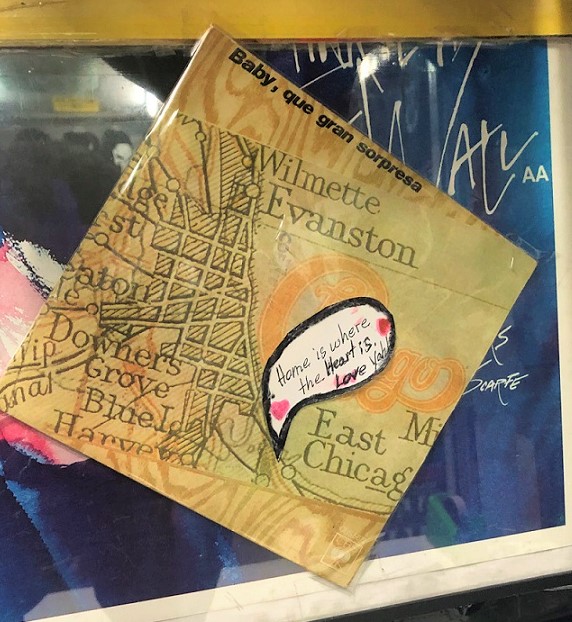 Maria and Jose had achieved success in that they could provide for their children. But, despite making enough, Maria wasn’t happy. Between all those stores she would work 10 to 12 hours a day. “I felt like a bad mother,” she said, “I felt like I was abandoning my family to work.”

Jose Antonio, on the other hand, was a workaholic. However, when he turned 40, Maria and her brood noticed a change in Jose Antonio. Slowly, the man who used to take his family on long drives began to neglect himself. When his family and friends suggested he get help, he replied, “A sick person is a person who doesn’t want to work.”

“He didn’t want to accept that he was mentally ill,” said Maria. Sometimes people don’t want to receive the help they need in order to heal. Though we love them, it doesn’t make the situation easier. 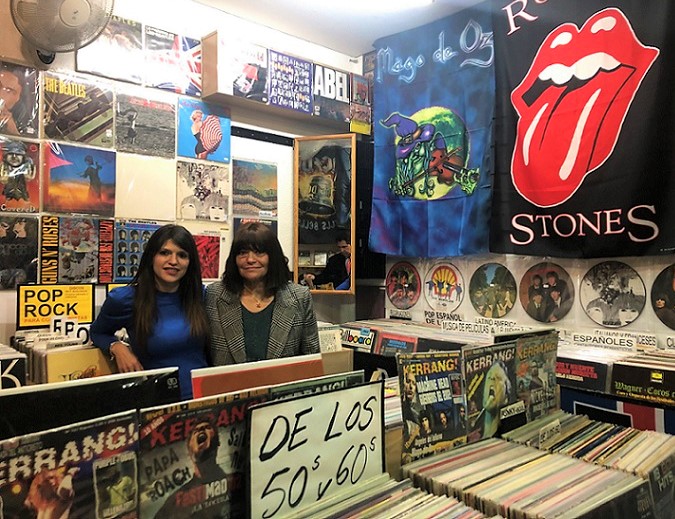 Angie, with mom. With Maria at the helm, La Gramola is now, literally, a family enterprise.

2015 was a tough year for the family. Maria’s sister, Angela, died in October and Jose Antonio followed that December. Fortunately, Maria has downsized to one location – the one on Calle Postigo – and now runs the family business with her four grownup children: Jose, Alberto, Angie and Maria. She lives with both her son Alberto and pug Coco, and she enjoys the freedom that comes with owning just one store.

Although she regrets her period of ambition, this experience helped define her idea of success. “Money doesn’t make you happy,” she told me. “When you die none of that money goes with you.” Instead, “It’s important for my children to live their life.”

Success for her involves bringing up a family and giving them what they need. 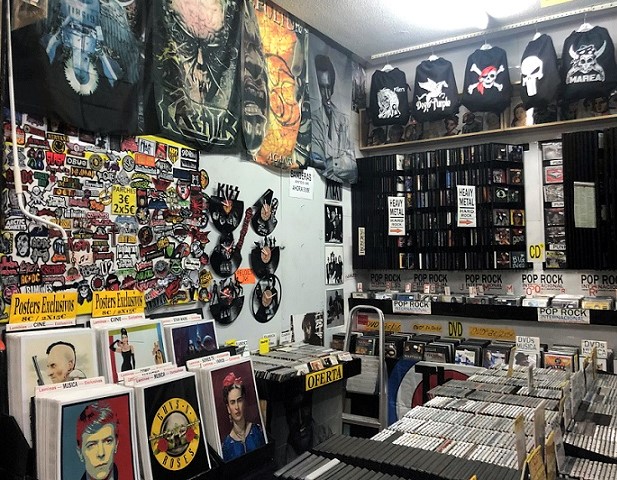 La Gramola sells everything from records and CDs to band memorabilia and even movies.

“To learn” is Maria’s second part of success. “Success,” she said, “is to learn a little about everything because that gives you a comprehensive outlook.” As she put it, “You can’t Google noise,” and so people come to her as a librarian specializing in sound. This comprehension speaks to Maria’s favorite part of running a record shop: helping people find the music they’re looking for, no matter their taste.

La Gramola Discos mostly carries rock genres but sells everything from records and CDs to band memorabilia and even movies. “Music must have something that’s magical,” Maria says. “It’s a way of letting out your feelings and your emotions without hurting people–and it comes out like a fountain, like a natural spring.”

Next article MADRID’S ALMOND BLOSSOM: IT WILL TAKE YOUR BREATH AWAY! »