For centuries, the legendary Spanish galleons sailed across the Atlantic and Pacific Oceans, explored the Caribbean Sea and the American coastline, and connected the New World to the Old, the West to the East. The so-called Flota de Indias (Fleet of the Indies) travelled along the longest sea route known to navigators then – Carrera de Indias (Route to  the Indies) – connecting Spain with the Americas and the Philippines, weaving through a “dominion where the sun never set”.

To recapture the essence of  the ultra-rich Spanish maritime culture, the Nao Victoria Foundation set out to build the Galeón  Andalucía, a unique replica of a Spanish galleon (the vessels that travelled the oceans in the sixteenth and seventeenth centuries). A veritable floating embassy, Andalucia has been travelling the world for the past eight years, showing  off the history of Spain in every port where it docked. In 2016, it welcomed more than 250,000 visitors.

“Galleons are a symbol of Spain’s maritime traditions and of some of the most brilliant centuries of Spanish history. They stand for our bonds with the sea and have produced powerful images that are deeply rooted in our collective memory,” says Juan Miguel Salas Tornero, Chairman of the Nao Victoria Foundation.

The Andalucía was built for the Spanish Pavilion at the Shanghai Expo 2010 to represent the region of Andalusia. It was built in Punta Umbría, Huelva, by a 150-strong team of carpenters, net makers, engineers, historians, and other specialists.

“First we did historical research to reproduce the shape, dimensions and features of a Spanish galleon in the Flota de Indias. Then we designed and built the ship, based on our findings,” Mr Salas Tornero explains.

After the historical research and structural design (six months) and the actual constuction (almost 18 months), the galleon was put out on water on 30 November 2009. The event was attended by thousands of people. Then the galleon sailed to the docks of Huelva where the team worked on the finishing touches for another three months.

The Andalusia is a 500 ton galleon with an overall length of 160 feet, 32 feet wide. Four masts hold 6 sails. Average speed: 7 knots. Since her launching, a crew of 15 to 35 people have manned her across the seas. She has navigated the Pacific, Indian and Atlantic Oceans, and sailed the Mediterranean Sea, the Red Sea, the South and East China Seas, the Aegean Sea, the Bosphorus Strait and the Caribbean Sea, as a true offspring of her indefatigable ancestors would.

Before arriving in Shanghai, the Andalucía visited more than 20 cities in Spain, Malta, Israel, Sudan, Oman, Sri Lanka, Singapore, China, Taiwan, the Philippines, Egypt, Turkey and Portugal. On the return voyage, it was fondly nicknamed La Pepa as homage to the Spanish Constitution of 1812, on the occasion of that liberal constitution’s 200th anniversary. (La Pepa was established on 19 March 1812 by the Cádiz Cortes, Spain’s first national sovereign assembly which took refuge in Cádiz during the Peninsular War. The Peninsular War — 1807–1814 — was a military conflict between Napoleon’s empire and the allied powers of the Spanish Empire, the United Kingdom of Great Britain and Ireland and the Kingdom of Portugal, for control of the Iberian Peninsula.)

A year later, The Andalucia/La Pepa sailed across the Atlantic Ocean to join the celebrations for the 500th annivesary of the discovery of Florida and for the 450th anniversary of the foundation by Admiral Pedro Menéndez de Avilés in 1565 of St. Augustine, the oldest European colony in the USA .

“The galleon is warmly welcomed wherever she goes. It is an iconic vessel, embodying the history of Spanish conquest of the New World, and a major tourist attraction,” Mr Salas Tornero observes.
–

Visitors are welcome aboard the Andalucía. Its crew is proud and happy to give an insider’s view of galleons. Its five decks house a visitor center focusing on the history of these ships in boards, screens and videos.

“It is a travelling museum teaching the history of Spanish galleons – ships connecting Europe to the Americas and to the Pacific Ocean – and the major role played by Spain during the Age of Discovery [the period of extensive European exploration overseas between the 15th and the 18th centuries], courtesy of our maritime power,” the Chairman of the Nao Victoria Foundation says.
–

With so many voyages around the globe, The Andalucía has become an extraordinary research platform. After its ceremonial launching, the Nao Victoria Foundation signed cooperation agreements with universities and organizations for the development of scientific projects in a variety of fields: Marine Biology, Nautical Science, Nutrition, Anthropology and History.

Last year it docked at Baton Rouge, Louisiana then sailed along the East Coast, calling at several Canadian ports. It is now back in Spain for a well-deserved break after five seasons in America . Then it’s out to sea again on a European tour. 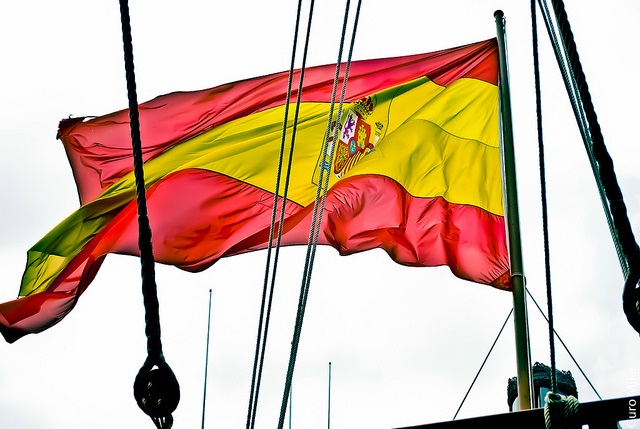 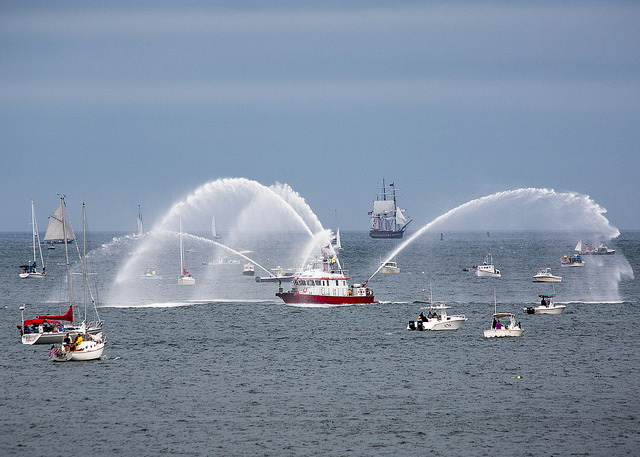 The Andalucia joins the parade of tall ships into Portland (OR) Harbor. Portland fireboat salutes participants. Andalucia is behind fireboat, off center 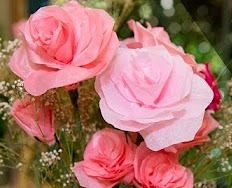