THE PRINCE OF ASTURIAS WINS NOBEL PRIZE IN LITERATURE

Bagpipes have become an integral part of the Prince of Asturias Awards ceremony, being the musical instrument of native Asturian music. Bagpipers are shown here in front of the Campoamor Theater.

The annual Prince of Asturias Awards which are presented in the early fall at the 19th century Campoamor Theater in Oviedo, the capital of the Principality of Asturias, consist of different categories: Arts, Communications and Humanities, International Cooperation, Literature, Social Sciences, Sports, Technical and Scientific Research, Concord, and Exemplary Town of Asturias.

In many cases the Prince of Asturias actually stole a march on the Nobel prizes by several years despite the fact that the fomer were established almost a century later.

A citation of Nobel Prize in Literature: Citation of laureate Rudyard Kipling in 1907, six years after the Swedish Academy first began to award said prize

The jury of the Prince of Asturias said on awarding the Arts prize to Dylan in 2007: he is “a living legend in the history of popular music and a guiding light for a generation that dreamt to change the world. Dylan, with an austere manner and profound messages, combines music and poetry in an oeuvre that has gathered a large following and which determines the sentimental education of many millions of people. For this reason, he embodies the spirit of an age that seeks ‘in the wind’ the hopes residing within the hearts of human beings.”

Dylan at the Azkena Rock Festival in Vitoria, Spain, 2010

And what does the Nobel’s Swedish Academy say on awarding the prize in Literature to Dylan 9 years later?  Well, he’s “created new poetic expressions within the great American song tradition.”

Though the Academy was somewhat jittery, choosing the 76-year old  Dylan wasn’t really “a difficult decision,” said Sara Darius, the Academy’s permanent secretary. “We hoped the news would be received with joy, but you never know. . .We’re really giving [the Literature prize] to Bob Dylan as a great poet – that’s the reason we awarded him the prize. He’s a great poet in the great English tradition, stretching from Milton and Blake onwards. And he’s a very interesting traditionalist, in a highly original way. Not just the written tradition, but also the oral one; not just high literature, but also low literature.”

But you simply can’t please everybody. Author Irvine Welsh (Trainspotting), who’s a self-avowed  Dylan fan, spewed venom:  “This is an ill-conceived nostalgia award wrenched from the rancid prostates of senile, gibbering hippies”.

For his part, on hearing the news of the award,  Salman Rushdie proclaimed he was spending the day playing Mr Tambourine Man, Love Minus Zero/No Limit, Like a Rolling Stone, Idiot Wind, Jokerman, Tangled Up in Blue and It’s a Hard Rain’s Gonna Fall. 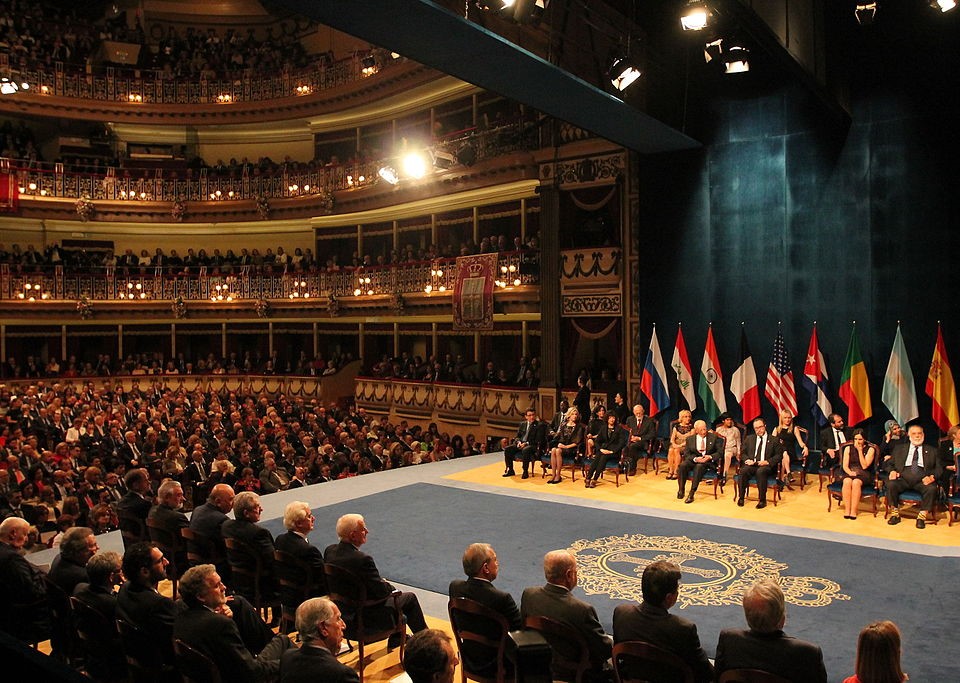 Prince of Asturias Awards ceremony at the Campoamor Theater, 2015

It’s been more than two decades since an American won the Nobel Lit. Toni Morrison, in 1993, was the penultimate laureate.

Next article STATESIDE STORIES: Will the VPs swing the election? »