THE NAVY LEAGUE LIFTS OFF TO OUTER SPACE 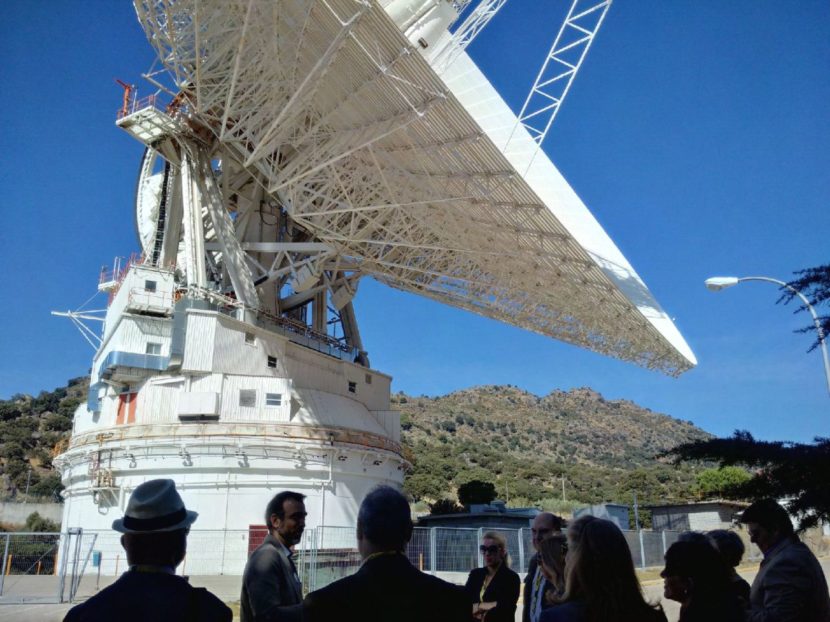 Members of the US Navy League Madrid Council traveled in space on the sunny 7th of October. Well, almost.  They were guests at the NASA Deep Space Communication Complex (MDSCC) in Robledo de Chavela, some 60 km west of Madrid on the Guadarrama Mountain. MDSCC, with the important cooperation of the Spanish Instituto Nacional de Técnica Aeroespacial (INTA), is part of NASA’s global Deep Space Network (DSN) run by the Jet Propulsion Laboratory (JPL) from Pasadena, California.

Leaguers arrive on the site

Earth-bound, you could hardly get any closer to taking a trip in space!

The DSN has two other stations: the Canberra Deep Space Communication Complex in Australia and the Gladstone Deep Space Communication Complex in California. The three are equidistant to each other by 120 degrees, which allows for uninterrupted Earth-Space communication while our planet rotates daily. This communication is made possible by the stations’ huge antennas which are so powerful they receive the faintest of signals from, and send signals to, a spacecraft millions – even billions – of miles away.

While on the job, MDSCC, like the other DSN stations, receives telemetry data from the spacecraft, leading to new scientific knowledge, as well as corresponding images. NASA’s mind-boggling interplanetary missions, tracked by the DSN stations, afford us a surprising understanding of the universe, our solar system and, ultimately, our place within the astronomical scheme of things.

Remember those stunning photos sent to us on Earth by NASA’s robotic rover Curiosity which landed beside a mountain in Mars for a two-year investigation on whether Martian environment is favorable for microbial life?

Curiosity touched down near Mount Sharp in 2012 and reached the base of the mountain in 2014, successfully finding evidence on the surrounding plains that Martian lakes offered conditions that were favorable for microbes so that Mars might have hosted life billions of years ago. Or so Curiosity’s findings attest.

On Mount Sharp, Curiosity has been investigating how and when the habitable ancient conditions, known from NASA Mars mission’s previous findings, evolved into the current conditions which, disappointingly, are drier and less favorable for life.

And there’s Cassini. The spacecraft has been orbiting Saturn and surveying the ringed planet and its moons.

NASA’s Cassini spacecraft has tracked the aftermath of a rare massive storm on Saturn on 2010-2011, more forceful than scientists previously thought. Even after visible signs of the storm started to fade, infrared measurements continued to reveal powerful effects at work in planet’s stratosphere. The Cassini mission is part of NASA’s long tradition of exploring our solar system. Photo: NASA/JPL-CalTech, last updated 12 January 2016

After more than 12 years studying Saturn, NASA’s Cassini spacecraft has reached the final year of its epic voyage, dubbed the Grand Finale. The end of the historic odyssey is planned for September 2017.

During the Grand Finale, Cassini will make the closest-ever observations of Saturn, mapping the planet’s magnetic and gravity fields with incredible precision and returning dead-close views of the atmosphere. Scientists are anxious for new insights into Saturn’s interior structure, the precise length of a Saturn day, and the total mass of the rings — which may finally settle once and for all the question of their age.

Cassini will also, for the first time in its mission, directly analyze dust-size particles in the main rings and sample the outer reaches of Saturn’s atmosphere.

And of course MDSCC will be there to receive all the awesome data Cassini will be radioing to Earth, the way it has always been doing with an efficiency that defies mathematical probabilities considering that space exploration is a terribly high-risk endeavor.

The US Navy League was.

Aside from the physical facility of the communication complex in Madrid, they were treated by Mr. Angel Martin, Director of the station, to a most riveting “lecture” ranging from how the station works to NASA’S space missions and every other interesting information in between. A scientific virtuoso if ever there was one!

A souvenir photo of the “deep space” odyssey

The Leaguers came away newly and deeply conscious of the awesome beauty of space exploration.

And to cap the experience, Leaguer Gabriel Cortina organized a lovely lunch for the group in the nearby pueblo of Chapineria. If you’ve got to come down to Earth, it better be to yummies, right?