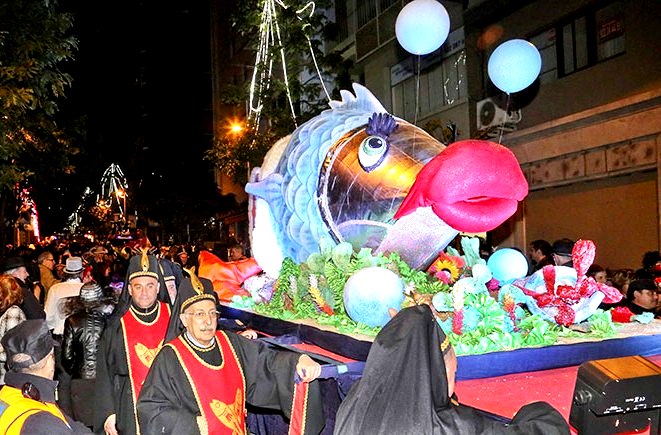 The carnival of Santa Cruz in Tenerife, the biggest island in the Canaries, is the world’s second largest carnival, next only to the Rio de Janeiro. Officially, the carnival in the island’s capital kicks off with the opening parade, Cabalgata Anunciadora, which in 2015 is on the 13th of February, and ends on Ash Wednesday, the 18th of the month, with the Burial of the Sardine. Off the official calendar, there will be the election of carnival queens — Senior Queen, Junior Queen, and Adult Queen or the Carnival Queen. This year  Adtemexi Cruz Hernandez, wearing her magnificent “Aurea” costume, was selected Carnival Queen on the 11th of February.

THE OFFICIAL CARNIVAL   The Carnival of Santa Cruz de Tenerife consists of two parts which fuse into one BIG celebration. One part is the official, which is an organized extravaganza of spectacular parades and hundreds of bandas providing almost every imaginable rhythm to boogie to.

During the carnival in 1989 some 250,000 enthusiasts attended the concert of world renowned salsa singer Celia Cruz. It turned out to be the largest gathering of people in an outdoor plaza to attend a concert and landed on the Guinness Book of Records. That record still stands.

Moreover, in 2000 Santa Cruz de Tenerife became the Carnival Capital of the World and hosted the 20th Convention of the Federation of European Carnival Cities.

Though the official program has acquired finesse over the years, with some of the actors’ spectacular costumes taking your breath away, people still refer to the carnival in Tenerife as Carnival Chicharrero or the carnival of the natives whose staple food is the humble mackerel. (Chicharro means mackerel.)

THE “UNOFFICIAL” PARTY   The other part of the carnival is what takes place spontaneously out on the streets. Thousands of people in carnival costumes join the party that goes on night after night, and during daytime too. Some say this is the true heart of the carnival. Tip: For the night people, arriving early may not be such a bright idea as the fun doesn’t surge into unsuspected heights until the approach of the witching hour.

Together the two parts turn the carnival into one long uproarious fiesta.

A BIT OF HISTORY   There must be a reason why folks wear masks at the carnival that originated in Italy in the 13th century and arrived in the Canary Islands through the Spanish conquerors in the 16th. In Catholic countries, and Spain was devoutly Catholic until recently, the carnival is blasphemous. And so coming disguised in costumes became traditional. With the blessed anonymity afforded by the disguises, the people could then carouse to their hearts’ delight, unmindful of the censure.

In 1976, just a year after Franco’s death, the carnival of Tenerife was still called “Fiestas de Invierno” (Winter Fiestas). Photo: Koppchen, CC BY 3.0

During the Franco regime (1936-1975) the carnival was not only considered anti-religion; it was also subversive, what with folk allegedly hatching crimes against the state under cover of all that masquerade! In 1937, the Generalissimo banned it outright and those who wanted to keep the clandestine carnival alive had to wear hoods on their heads and keep literally close to home the easier to dodge arrest.

It was in Tenerife where the carnival re-emerged. Stealthily. Euphemistically called “Winter Fiestas” in the 1960s, Franco, who was once a Governor of the Canary Islands, became more tolerant of the Fiesta – but never repealing the ban – since the crime rate in the Canaries was low.

However, soon after Franco’s death in 1975 the Winter Fiestas were able to assume their legitimate name and all the freewheeling revelry that came with it:  carnival.

THE BURIAL   The excesses of the carnival are snuffed out – and so is the official carnival – at the Burial of the Sardine (entierro de la sardina), a parade that parodies a funeral cortège, the “disconsolate widows” wailing like banshees. The effigy of the poor sardine, symbol of the excesses, is taken to the harbor where it is burned while spectacular fireworks burst in the Tenerife sky, ushering in the forty solemn days or so of the penitential Lent.

Banshee at the Burial of the Sardine.

The “sinful” Sardine is burned on the funeral pyre.

CODA   To those who may have wanted to join the carnival in Santa Cruz de Tenerife but can’t come to the island on the date, you’ll have to make do with the Piñata which is held on the weekend following the Burial of the Sardine. It’s some kind of a coda to a frenzied tune that grabs you and to which you surrender with surprising abandon, a tailend to the fiery party whose memory will linger for a long long time – that is, if you’re lucky to have joined it. If not – if all you can manage is the Piñata – well, something is something.

Official poster of the Tenerife carnival

The Piñata is an attempt to rake up another party while the drumbeat of the carnival still echoes at the plaza but, really, all it manages to do is put paid to Don Carnal who won’t show his face again till next year.

For the official program of the carnival of Santa Cruz de Tenerife, click here.

Guide to the Carnival 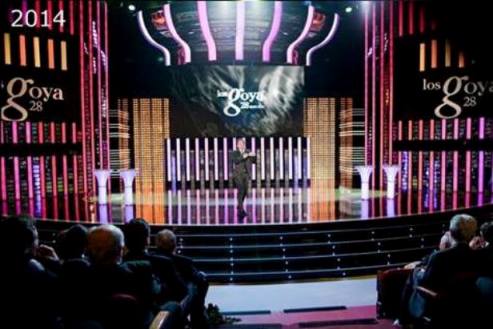 Previous article « EDITOR’S BLOG: The Goyas & the Vicissitudes of the VAT