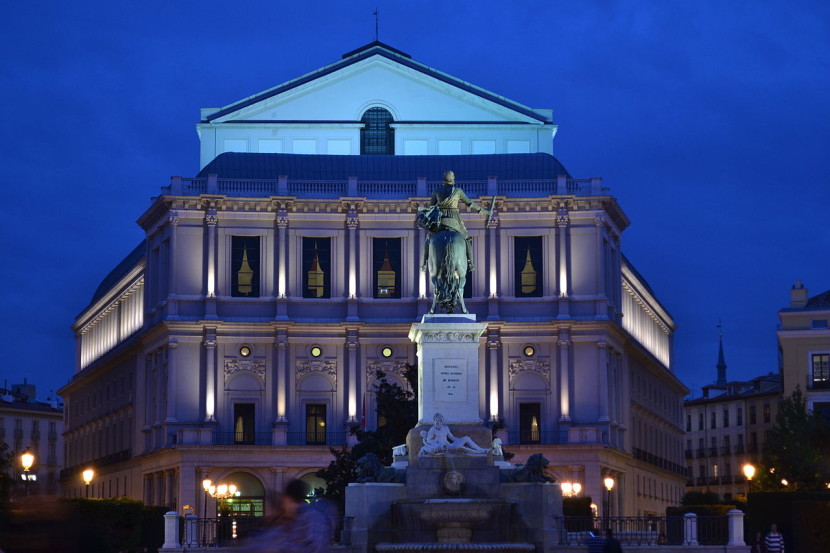 The Teatro Real, a major opera house in Europe. An important venue for
Lent-appropriate oratorios like Haydn’s The Creation

Ed’s note: In Spain, the Semana Santa without the religious processions would not be Semana Santa. But there’s more to the Holy Week than these corteges of  lifelike images of the crucified Jesus and Our Lady of Sorrows, Jesus’ sorrowful mother. For the inveterate music lover, concert programming need not  be interrupted just because it is Holy Week. In fact,  Catholic Spain’s Easter celebrations are invariably enriched with music, preferably the “solemn and often Baroque oratorios”.
For the Holy Week concert programming 40 years ago, see  GUIDEPOST’s reprint of “Holy Week Prelude.”

Spain’s Holy Week observance, with its exodus from the big cities, traditionally brings pause in the season’s concert programming [with] symphonic sessions by major orchestras replaced by the opera festival [and] provincial music festivals. Lententide selections are inevitably solemn and often Baroque oratorios. The Orquestra Nacional presented Bach’s Passion According to Saint John this year on the eve of Semana Santa, instead of the Saint Matthew Passion by the same composer which is usually scheduled for Palm Sunday and the preceding two days. . .

The Radio-Television Symphony, under the direction of titular conductor Odón Alonso. . offered one of multi-faceted programs typical of Maestro Alonso. While it did not overlook the sacred aspects of the date, the RTV program offered the special attraction of a world première by José Mª Sanmartín, the group’s pianist and a fine composer in his own right who studied with Arthur Honneger. The Sanmartín composition, entitled Sabbatical Dances, is deeply inspired by Basque folklore in its references to the “Aquelarre” or witchcraft practices that have been so thoroughly studied by researchers such as Julio Caro Baroja. The other piece on the first half of the program was Liszt’s First Piano Concerto, featuring as soloist a highly talented (and just as highly strung) young Hungarian in his early 20’s named Zoltan Kocsis, who had trouble dominating his nerves and keeping with Liszt score that the conductor and orchestra took pains to help him with.

The second part of the RTV concert was devoted to Cherubini’s Requiem in C Minor, done for the first time by this orchestra and by no means a familiar piece in Madrid repertories. That alone is a cause for congratulations, and reflects the recent RTV Symphony effort to bring new or seldom-heard works of interest to Madrid concertgoers. . . A special highlight of this Madrid prelude to Holy Week was a program of música sacra on the first Sunday of April at the German Evangelical Chapel on the Castellana that offered a fine instrumental ensemble of chamber musicians of various nationalities . . . and the Tomás Luis de Victoria Choir with a multinational quartet of soloists (featuring Cheryl Little) in works by Heinrich Schütz, Victoria, J. S. Bach and Augustin Pfleger. Perhaps it’s the chapel setting, or perhaps the special care and artistry provided by all the performers, but there was something unusually intense and satisfying about this concert of sacred music. . .

Special events will once again keep the Teatro Real and other Madrid concert halls busy even after the two major symphony orchestras wind up their current seasons late this month. For one thing, cello virtuoso Mstislav Rostropovich will be giving a special memorial program of Bach’s Suites nº. 2, 3 and 5, at Teatro Real on April 20th (and later at the Palau in Barcelona). . . Fortunately, the Radio Nacional cycle of Musical Mondays at the Sala Fénix still has several sessions to go: Manolo Carra is to play an all-Schumann program for piano, and the Lejona Chorus will do a Basque choral concert at the Carmelite Church on the Plaza de España. The 1976 Opera Festival will raise the curtain on Verdi’s Don Carlo at the Zarzuela Theatre with an all-star cast April 23rd & 26th , and the Royal Philharmonic orchestra is coming to the Real soon. Jean-Pierre Rampal will bring his flute to the same hall this spring.

Coming up: Igor Markevitch, beloved founder of the Spanish RTV Symphony, will be on hand to conclude that orchestra’s current season with Hayden’s oratorio The Creation at the Teatro Real on April 24 & 25. . . Rafael Frübeck de Burgos will conduct works by Muñoz Molleda, Weber, Richard Strauss and Manuel de Falla . . . at the Real that same week-end , April 23, 24 & 25. . . The San Juan Bautista Choral Group from Lejona will perform music by Olaizola, Guridi, Larrauri and other Basque composers at the Carmelite Church of Santa Teresa in Plaza de España on Monday, April 26 at 8 p.m…. Montserrat Caballé, Boris Christoff and Vicente Sardinero will sing Don Carlo at the Zarzuela on April 23 & 26.

Next article JUST A LITTLE DID-YOU-KNOW? »