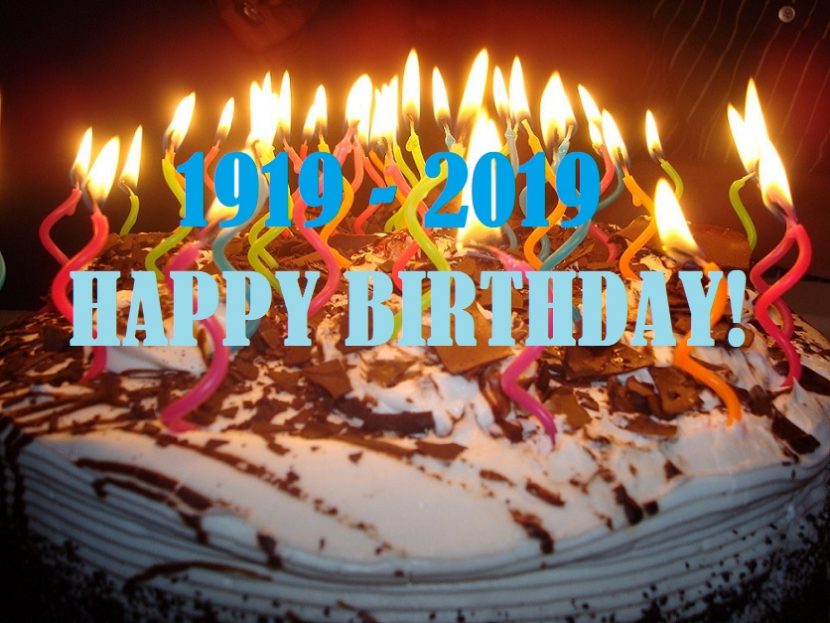 On 17 October 1919 King Alfonso XIII of Spain inaugurated the capital’s first ever subway line aptly but unimaginatively called the North-South Line because it literally went from under the Puerta del Sol in the center of the city up 3.48 kilometers (2.16 mi) north to Cuatro Caminos, a barrio northeast of Sol. A century later, the fledgling underground transport system of a measly eight stations boasts 12 lines and 302 stations, spanning 294 kilometers. The historic eight stations were Sol, Red de San Luis (now called Gran Via), Hospicio (now Tribunal), Bilbao, Chamberí (closed since 1966, operating as a Metro museum since 2008), Martínez Campos (presently Iglesia), Ríos Rosas and Cuatro Caminos.

In constant expansion, the North-South Line would become Line 1, and succeeding lines would be Lines 2, 3 ,4 and so on till it gets to Line 12.

And so it happened that on that day in October 1919 Madrid caught up with the rest of the major European capitals, revolutionizing the way the Madrileños moved around their city and bringing the peripheral barrios into the urban hurly-burly. In the process, it turned metropolitan Madrid into the most densely populated in the world. 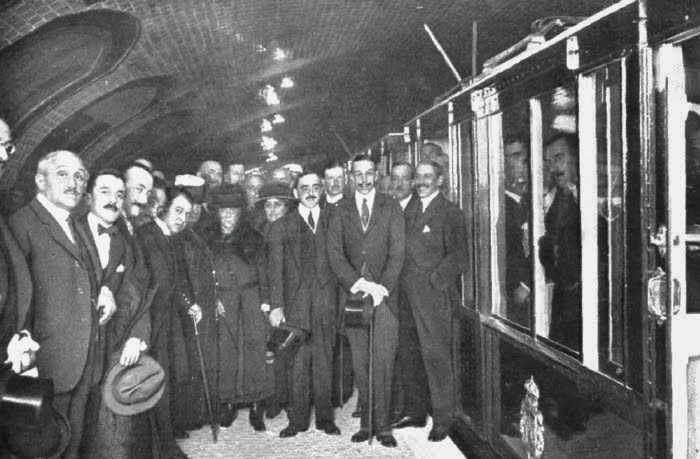 Would the locals take to the metro like a duck to water or would they not? Nobody knew for sure. But just in case, the subway architects saw to it that bright, colorful materials were employed in areas of foot traffic: hallways, passages and platforms. . . White and cobalt blue tiles and ceramic pieces were used extensively, drawing inspiration from the décor of the Paris metro at the time.

It worked like a charm – that, and the novelty of it, and the fact that the subway trains reduced travel time by more than 60%. While the Sol-Cuatro Caminos route took more than half an hour on a tram, the Metro took only ten minutes. It was “rapid transit” from the get-go! 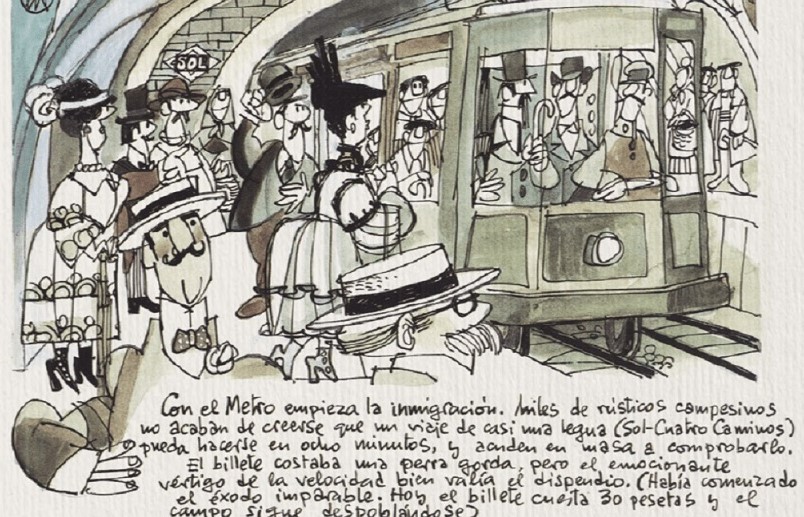 Rendition by the famous Spanish cartoonist-writer, Mingote,  of the first Madrid Metro passengers: “Thousands of rustic peasants could not believe that a trip of almost a ‘legua’* (Sol-Cuatro Caminos) can be made in eight minutes and they came en masse to see for themselves.”

When the Madrid Metro was opened to the public two days after the inauguration,  56,220 passengers rode on 390 trains. The company earned 8,433 pesetas in ticket sales!

Something to be proud of

Today Madrid Metro is one of the most impressive metros in the world. Known colloquially as Metro de Madrid – originally Compañia Metropolitana de Madrid – it is the third longest subway in Europe, after London and Moscow, and the world’s eighth, next to Shanghai, Beijing, London, New York, Canton, Seoul and Moscow. In terms of stations, its 302 have made Madrid Metro (current official name: Red de Metro de Madrid) the fifth in the world, outpaced only by New York (472), Shanghai (329), Seoul (308) and Paris (303). However, Madrid and Paris will soon be quits if the Arroyo del Fresno station is inaugurated as planned (Spring 2020). 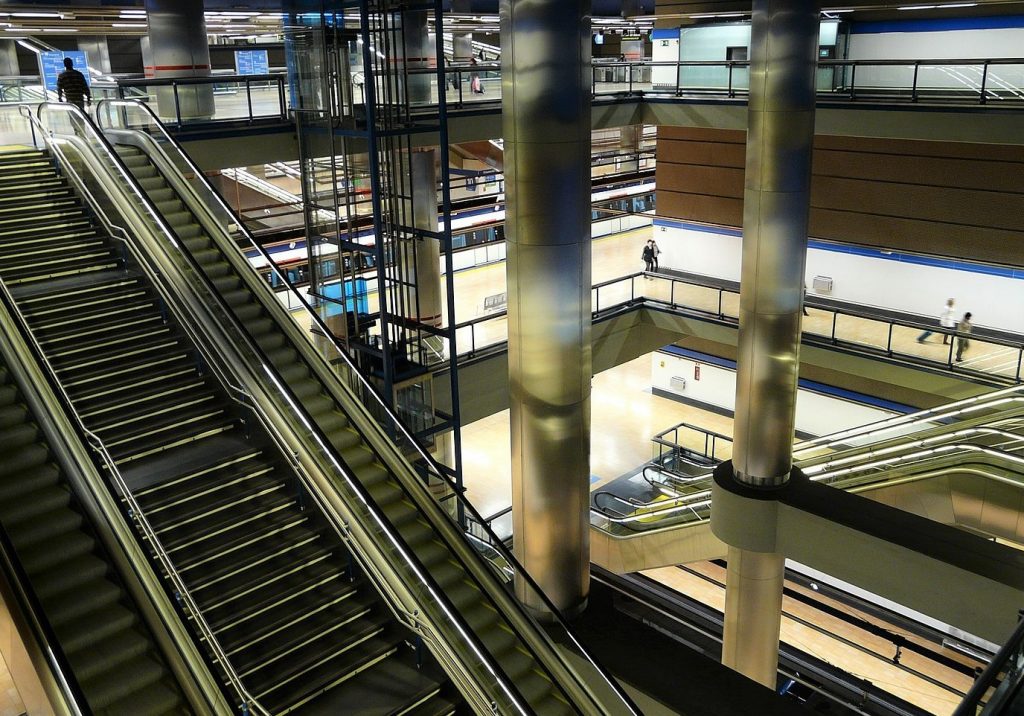 Vanguard of accesibility: 1705 escalators and 530 elevators!

And it is a vanguard of accessibility too, being the second metro in the world with the most escalators (it has 1705), only behind Shanghai; when it comes to elevators, it tops the list, having 530. That’s more than all the lifts in the London, Paris and New York subways combined! And that’s not the end of it either; by 2020 a cool 73% of all the Madrid Metro stations will have lifts as per the 2016-2020 Accessibility and Inclusion Plan.

The Madrileños are understandably proud of their metro. 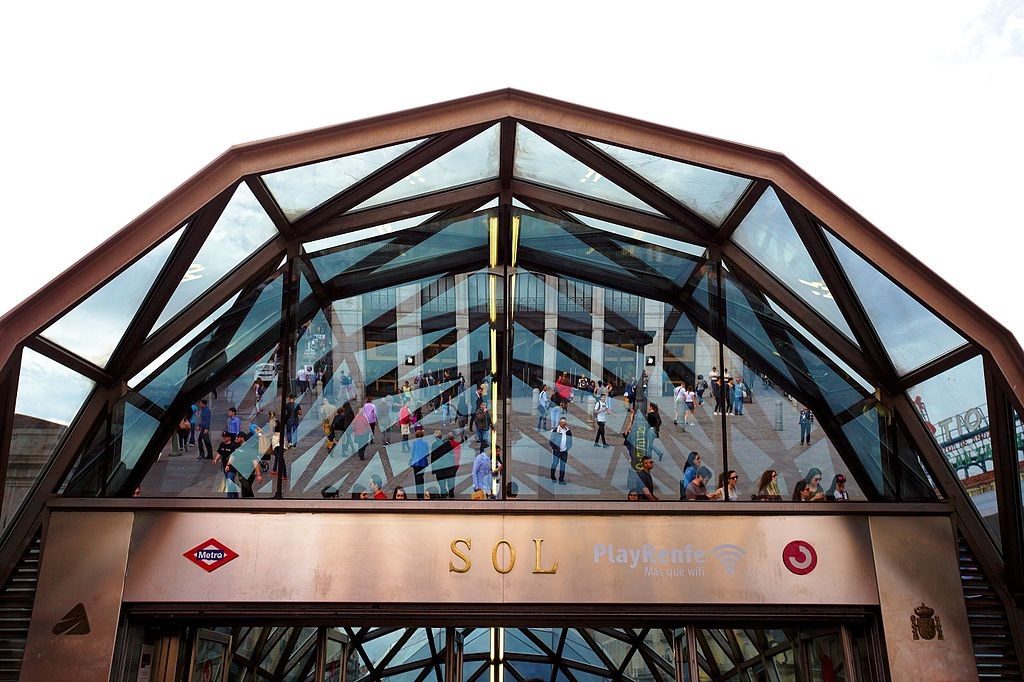 While on its first year of operation the Madrid Metro was used by 14 million people, a hundred years later the annual count is more than 650 million (i.e., an annual ridership of 657.21 million). On a daily basis, its trains travel 550,000 kilometers to take more than 2.3 million passengers to their destinations.

The first passenger of the Metro was Alfonso XIII. He would be. He plonked down more than a million pesetas on the inspired project out of his own pocket and, as said, he inaugurated it. Members of the royal family came along for the festive ride (lunch was served on the Cuatro Caminos platform after the round trip, and the engineers were congratulated for the “miracle” they created). 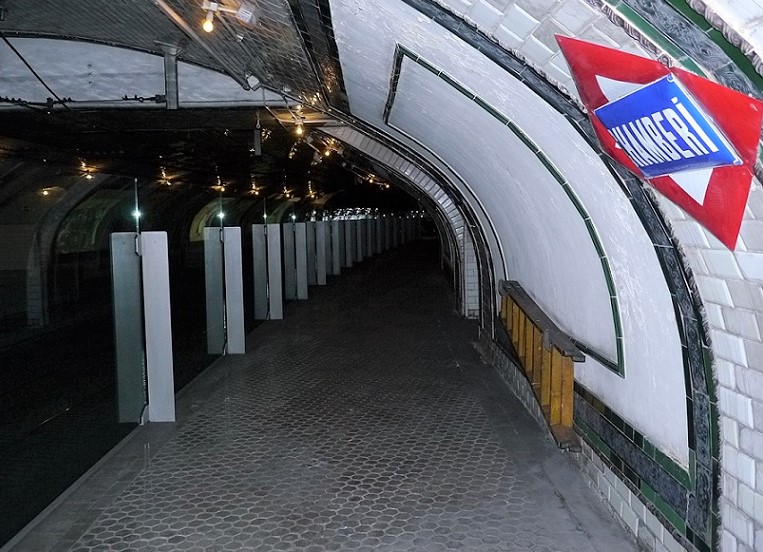 Chamberi, one of the eight original stations of the North-South Line, is said to be haunted. It now a Metro museum.

Myths, legends, and the reality of the green train

Myths and legends would have it that some Metro de Madrid stations are haunted by ghosts. Fantasy aside, the Metro has museums and works of art; hosts exhibitions; is home to archeological findings. 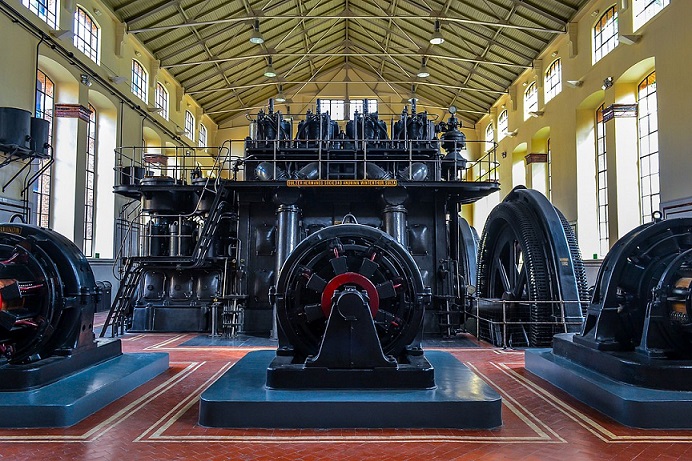 Diesel motors used for generating the electricity that the trains ran on before the Spanish Civil War.

Last but not least, Madrid Metro is an accidental environmentalist. From its inception, its trains have been running on electricity. It was the world’s first metro to operate so. And that was a century ago, when nobody thought of saving our Planet via the clean-air route! (If it ain’t broke, why fix it?) 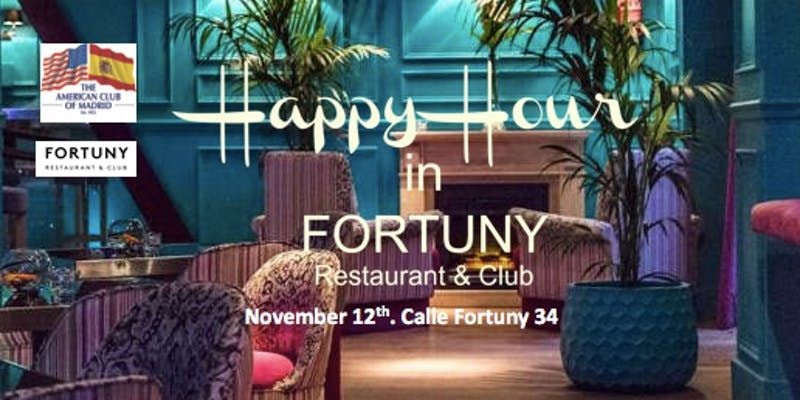 Next article TASTE YOUR EMOTION WITH FEDERICO CAPOVILLA »