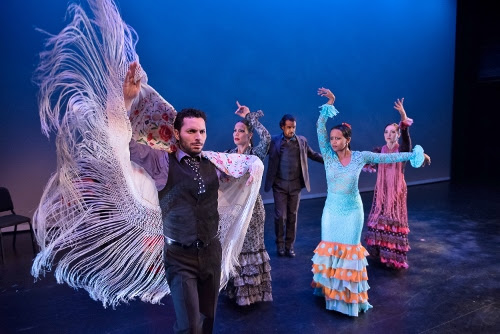 In May and June, Madrid, Spain, is hosting Suma Flamenca, with performances in the art of flamenco by the country’s most exciting dancers, singers and musicians, both iconic and established stars and up-and-comers. So what’s a Manhattan flamenco addict jonesing for a hit to do? I couldn’t cross the ocean this year, so on May 19, I crossed a river and a bridge to see Flamenco Vivo Carlota Santana, which had its Spring New York City Season at Brooklyn Academy of Music Fisher (321 Ashland Place), May 16-21. A happy alternative. 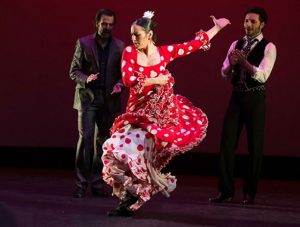 The Company, co-founded in 1983 by Carlota Santana, its artistic director, featured impressive new gems, commanding solos by the charismatic Angel Muñoz and his wife, the singular Charo Espino, works that showcased both the men and women in the Company and world-class musicians and singers from Spain. Santana’s stated mission is to preserve flamenco as a living art. In that she has succeeded by expanding flamenco’s range and depth to include other dance and art forms.

The world premiere of “El Pintor” featured a series of vignettes in homage to the modernist/symbolist painter Julio Romero de Torres (1874-1930), renowned for his depictions of women, flamenco, and popular and religious fiestas of his birthplace. Choreographed by Antonio Hidalgo, the Company’s Associate Artistic Director, principal dancer and fellow Córdoban (town of Lucena), the work was a beautiful blend of music, song, dance and art appreciation. Admittedly, I wasn’t familiar with Romero de Torres, so it was a delight to be exposed to his extraordinary paintings, used as a backdrop to accompany the segments, in addition to striking photographs of the historic sites of Córdoba

The sensual “La Piconera” (The Coal Girl), who became the artist’s muse, was a choice companion to introduce the four women of the ensemble and intricate choreographic structure. There was a charming, conflict-free love duet by Hidalgo and Eliza González entitled “La Malagueña” (The Woman from Málaga), taken from the painting of a seated woman with guitar, a man looking over her shoulder and some strange goings on in the background. “La Saeta” (The Arrow) captured the somber atmosphere of the religious processions of Holy Week (from Palm Sunday to Easter Sunday). Four men hit stick on stick while stomping slowly and rhythmically across the stage. Then four women, garbed in black with scarves draping their heads, dance, bend and supplicate. The ensemble danced to spirited flamenco tango rhythms for “La Feria” (The Fair), the colorful, animated spring festival that is celebrated throughout Andalucía. 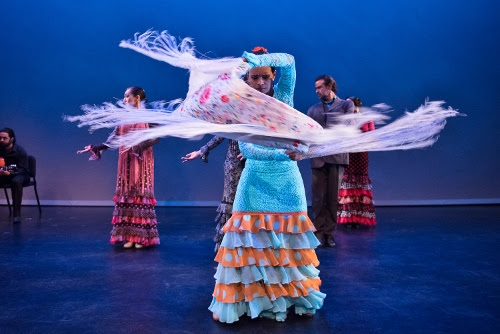 The second premiere, “Pa’ Triana Voy” (I’m Going to Triana), choreographed by José Maldonado, who is from Barcelona, celebrates the Triana neighborhood of Seville (Andalucía), where a large gypsy (Romani) population worked, danced and lived peacefully with their non-gypsy neighbors, before being forcibly evicted by the Franco regime during the 1970s, for redevelopment of the prime real estate. The piece used the songs of the then married couple, Lole y Manuel (1975-1990), who both came from a long, distinguished line of Romani performers. (They are featured in the soundtrack to Quentin Tarantino’s “Kill Bill: Volume 2″.) Their innovative “new flamenco” fused flamenco sounds with Arabic rhythms. (Sadly, Manuel Molina died in 2015.) The choreography sparkled, with the performers seemingly gliding along the stage and around each other in varying patterns and shapes. They also took solo turns with a long fringed shawl for some nice whirling, spinning effects.

“A Solas” (“Alone”) by Angel Muñoz, for four women, was both light and lyrical, rooted in the traditional soleá por bulerias rhythm, with an undertone of soulful, or solitude (soledad). 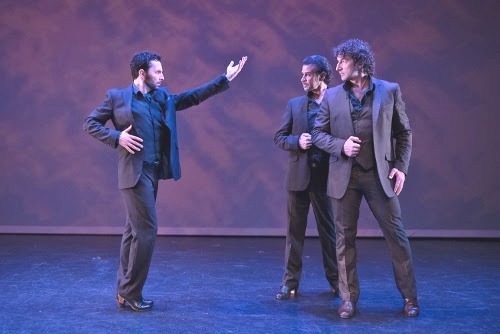 The exhilarating men’s trio, “Caminos” (Paths or Roads), was choreographed by the fiery 44-year-old Muñoz performing with the veteran Hidalgo, stolid and serious, and the youngster Isaac Tovar, who is short, slender and lithe. They danced as one to intricate traditional and contemporary phrases, or took a solo, which showed off their incredible prowess.

As if  “Caminos” weren’t enough excitement, Muñoz returned with “A Mi Manera” (In My Own Way), a majestic solo. He danced to tientos, a slower flamenco tango rhythm with bursts of fast footwork. He is a showstopper without being a show-off, as some bailaors have tended to be. The accompanying verses, sung by Juan José Suárez, a renowned singer of gypsy origin, deal with loss and unrequited love. If I had had carnations (traditional flowers for this occasion), I would have thrown them on the stage. But there was no shortage of well-deserved olés for him and the Company.

Award-winning Bonnie Rosenstock wrote for Guidepost back in the 1980s when she lived in Madrid. She’s now with exploredance.com, among other publications in New York. While working for The Villager and Chelsea Now she won three awards from the New York Press Association Better Newspaper Contest.
After years of absence she’s contributing regularly to Guidepost again. To our mag’s delight! 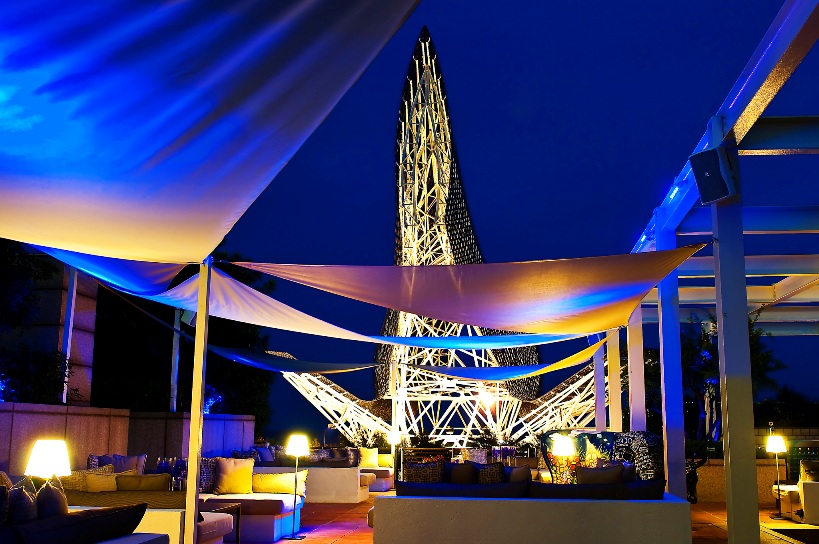 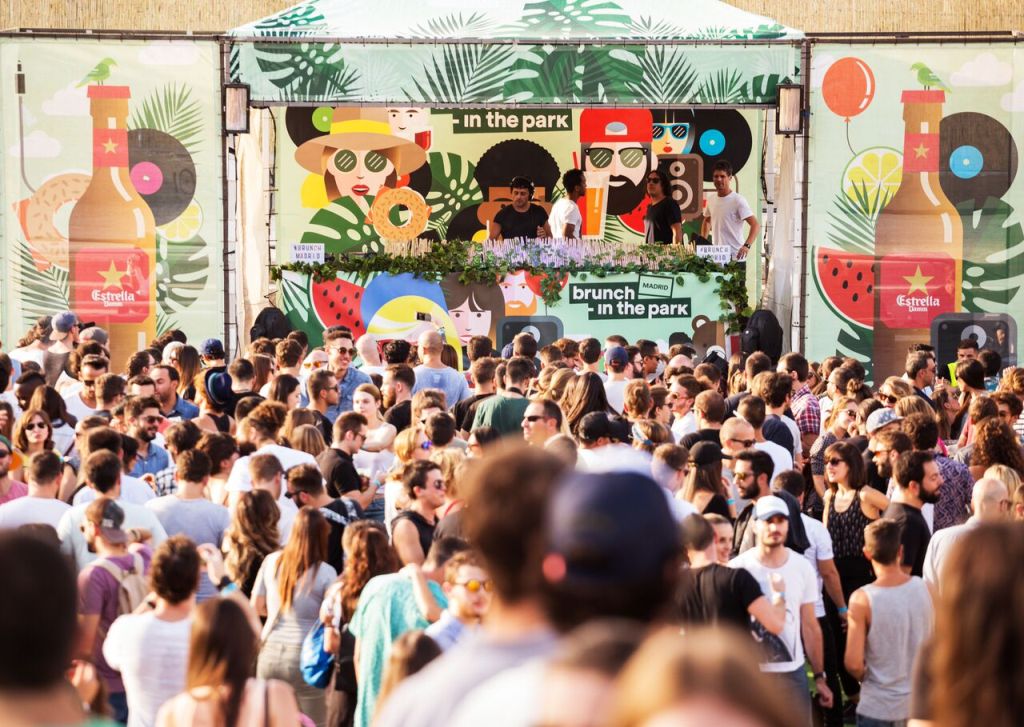 Next article BRUNCH (AND MORE) IN THE PARK »