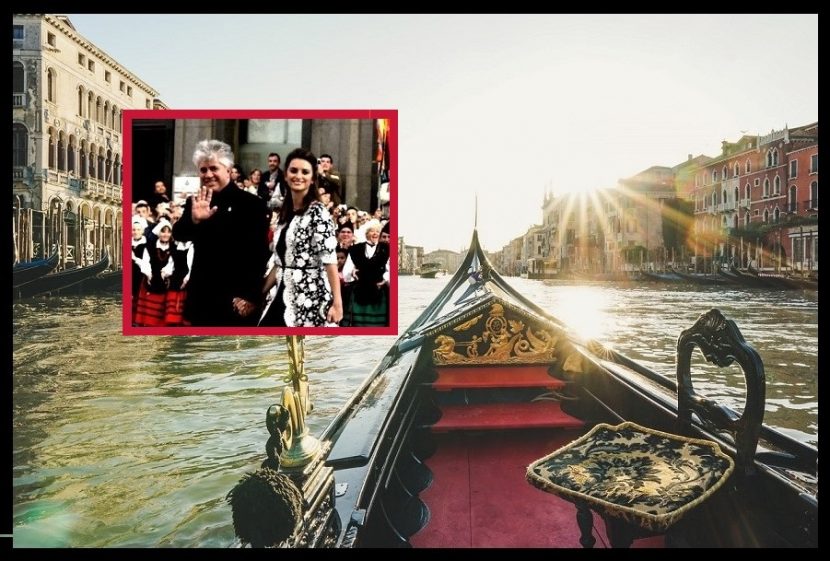 And now they’ve set their sights on Lincoln Center, New York, and the Dolby Theatre in California

You didn’t need divine inspiration to know that Pedro Almodovar’s Parallel Mothers, starring Penélope Cruz, would bag a Coppa, a Leone and/or an Osella at the 78th Venice Film Festival held 1 – 11 September 2021. 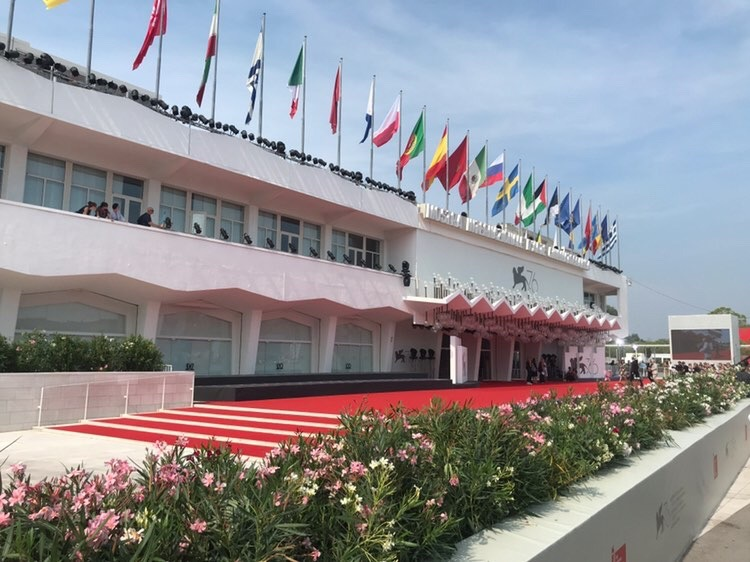 For one thing, the Spanish movie which set the Festival rolling, elicited a nine-minute standing ovation at the screening on opening night. Moved, Penélope Cruz, who had clutched Almodovar’s arm in a fond gesture, went teary-eyed during the enthusiastic applause.  Even Sergio Matarella, President of Italy, applauded on his feet, generating a standing ovation for his own. 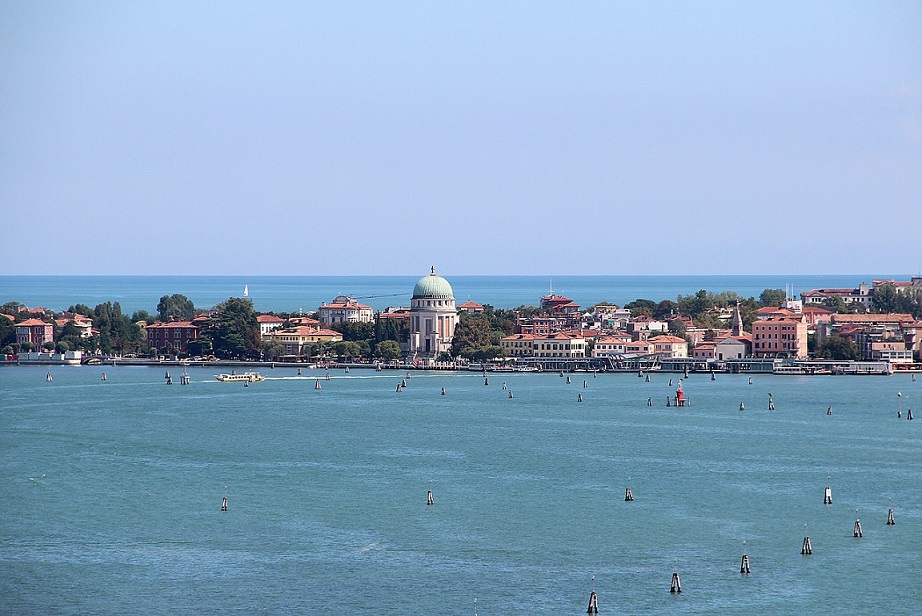 Lido Island on the Venice Lagoon

That screening on the Lido, at the Festival’s inaugural night, was actually Parallel Mothers’ world premiere too.

Well, the auspicious signs didn’t goof their line; at the Festival’s closing ceremony on Saturday night, Penélope Cruz ran away with the Coppa Volpi as Best Actress, as predicted, for her critically acclaimed performance as the near-forty Janis in Parallel Mothers.

“I’m going to say it very quickly so as not to cry because I am always crying. Not only my career, but my life, would be so different if he had not been in it. Thank you, Pedro. This,” proffering the Volpi Cup to Almodovar, “is 100 percent yours.” 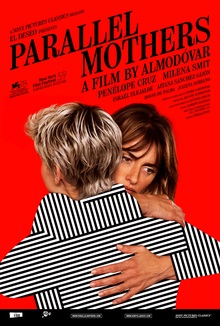 She confessed out loud that with Parallel Mothers, Almodovar has  “created magic again and I could not be more grateful or proud to be part of it.” She added: “I adore you.”

Parallel Mothers is the seventh movie that Penélope has made with the Manchego director,  including All About My Mother, deemed Almodovar’s best film (Oscar for Best Foreign-Language Film 2001) until Parallel Mothers, and Volver where the actresses in the leading roles shared the Cannes Best Actress award and got the Best Director award for Almodovar himself.

Stunning, show-stopping, natural-grace-and-glamour: Queen of Spanish cinema Penelope Cruz glided onto the red carpet on black and silver ankle-strapped Chanel pumps, and in an off-the-shoulder silver gown over a tulle underskirt – again Chanel – at her win. She has just then made history as the first and only female Spaniard, and the only actress across the Spanish-speaking world, to win the prized Coppa. Elated, she holds her Coppa like the precious jewel that it is in her cinematic crown. 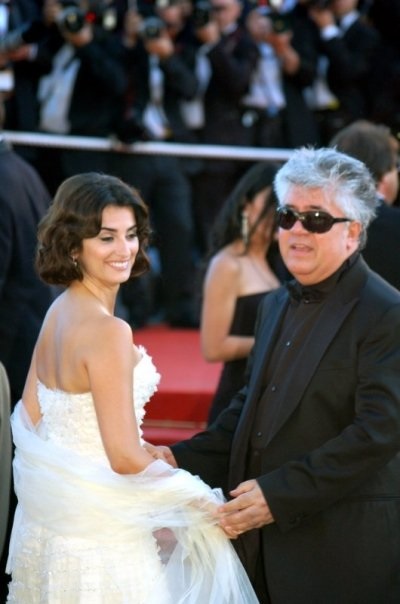 Pedro & Penélope, the Dream Team, at Cannes in 2006 where she won Best Actress for her role in Volver

Cruz has now joined the ranks of actresses who have won the Volpi Cup and made the seventh art an art of sparkling dimensions. To name a few Coppa winners since the Festival was founded in 1932: Bette Davis, Katherine Hepburn, Ingrid Bergman, Sophia Loren, Shirley MacLaine  (2 Coppas for The Apartment and Madame Sousatzka), Catherine Deneuve, Charlotte Rampling, and Cate Blanchett.

As an aside: Penélope’s husband, Javier Bardem, has two Volpi Cups to his name. He was Best Actor for the role he played in Before Night Falls in 2000 and in The Sea Inside (Mar Adentro)” in 2004. He is the only male Spaniard to win the Coppa. 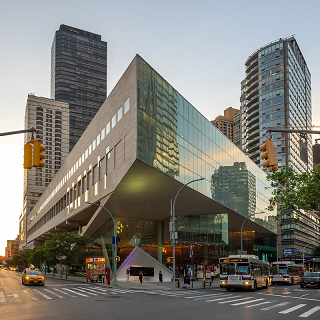 The Alice Tully Hall. After Parallel Mothers took Venice by storm, why not take New York too?

The Coppa Volpi could quite easily presage other wins to come. Parallel Mothers, which will make its North American premiere on 8 October at Alice Tully Hall at the Lincoln Center for the Performing Arts in Manhattan, has been given the honor to bring the 59th New York Film Festival to a close. NYFF begins on 24 September and ends on the 10th of October 2021.

Will the Dream Team hit another jackpot at the Academy Awards?

Almodovar, who is privileged to have a relationship with NYFF that spans three decades and a dozen films, is very much welcome there. Says the Festival’s Director Eugene Hernandez: “We’re thrilled to have Pedro back at NYFF to conclude this 59th edition!”

Also looming bright over Parallel Mothers is the Academy Awards 2022. If Penélope Cruz, 47, bags an Oscar, it won’t be the first time. When she played the emotionally unstable painter María Elena in Woody Allen’s Vicky Cristina Barcelona 13 years ago, she took the  Best Supporting Actress statuette home. That made her the first Spanish actress to ever win an Oscar.

Related post: What You Would Want to Know About the Queen of Spanish Cinema

Images
>Featured image/Penélope Cruz & Pedro Almodovar/jlmaral, CC BY-SA2.0, cropped and framed. Venice backdrop/ Diego Gennaro from Unsplash. (Cruz and Almodovar are seen on the way to the prestigious Prince of Asturias Awards Ceremony in 2006 where the latter won the Award for the Arts.)
>Lido/Jean-Pol GRANDMONT, CC BY4.0
>Parallel Mothers poster, Fair use via Wikipedia
>Oscar trophy: based on image uploaded to English Wikipedia by User FrB.TG, Fair use

Previous article « THERE’S A NEW KID ON THE ART SCENE