THE CHEFS & THEIR CULINARY CHOREOGRAPHY 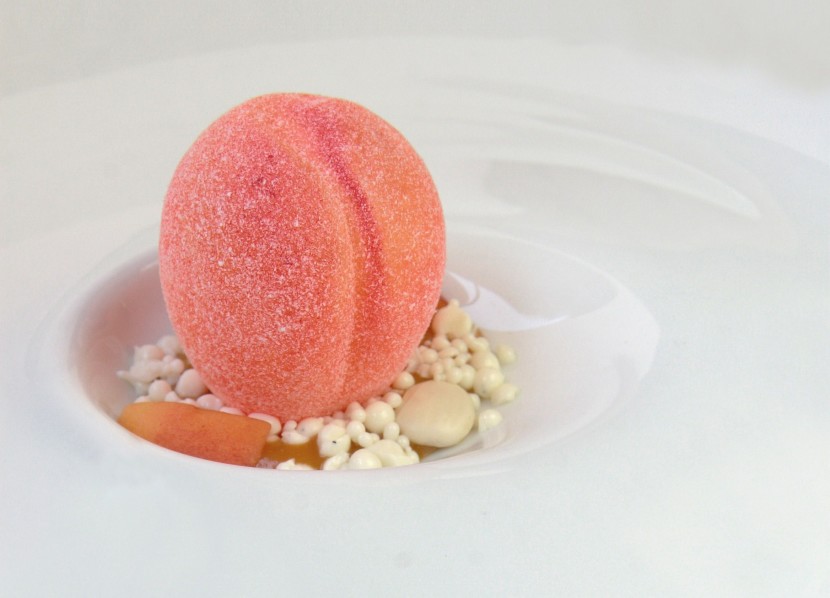 Madrid and Girona are cities with a delicious twist, this Christmas and Winter season. Both are delivering extraordinary sensory experiences and one can actually taste the passion in the cuisine, and in these jaded times creativity and new flavors originating from tradition and innovation are on the agenda.
May the New Year 2013 bring the best of health, prosperity and happiness to all!

Joan Roca, executive Chef and owner of El Celler de Can Roca (www.cellercanroca.com), belongs to the generation of entrepreneural and visionary high end chefs that have gradually been turning the Iberian Peninsula and his birthplace, the capital of Girona, into a global epicurean shrine. London Restaurant magazine had awarded the 2nd place to El Celler de Can Roca for the World’s Best Restuarant in April 2012.

Joan runs the restaurant, which has three Michelin Stars, with his two younger brothers Josep and Jordi, and together they aim to create an extraordinary gastronomic experience for each and every diner. The Chef has long sought out unique cooking techniques and has a particular passion exploring the links between aromas, flavors, perfume, almost as if he was a sorcerer brewing ingredients for a spell.

One example of this is how Joan has revitalized ancient ingredients such as edible foil papers of gold, silver and copper which are said to lower cholesterol. These were commonly used in the 6th century Persian Empire and today fill and adorn some of his specialties. Along with wonderful wines selected  by Sommelier Josep and the sweet tooth creations prepared by Jordi, Joan’s dishes enable diners to appreciate the sensory quality of the product.

A visit to Restaurant El Celler de Can Roca, which is set in a beautiful stone manor townhouse nestled among lush herbal and botanical gardens, requires a willingness to suspend the antiquated notion that eating is a fundamental of life, something we do in order to survive. There is little about a lunch or dinner here that can be compared to any notion that we eat to live.

Margaux: What or who inspired you to become a chef?

Joan: Firstly, genealogical heritage has bestowed my brothers Sommelier Josep and Pastry Whiz Jordi and me with epicurean bloodlines. My earliest memories are of my mom Montserrat in the family kitchen. However, my parents didn’t just cook for the family; they prepared dishes for their customers at their traditional Catalan restaurant. It is of no surprise that all three of us have ended up in the restaurant business. After attending culinary institute in Girona and France, my two brothers and I opened El Cellar de Can Roca right next to the family restaurant. El Restaurante de Can Roca had its beginnings in 1986, and was cradled into a very constricted space where I could barely turn around in the kitchen. The décor was modest, no frills.

Margaux: While lots of restaurants can turn out a good meal or two, few can match the Roca brothers and their colossal portfolio of fine food and wines. What has led you to your success today?

Joan: Our move in 2010 has marked our turning point for us, in the way we have merged the gastronomic tradition of Catalan and Mediterranean cuisine and advanced technology.

Margaux: How would you describe your culinary philosophy? 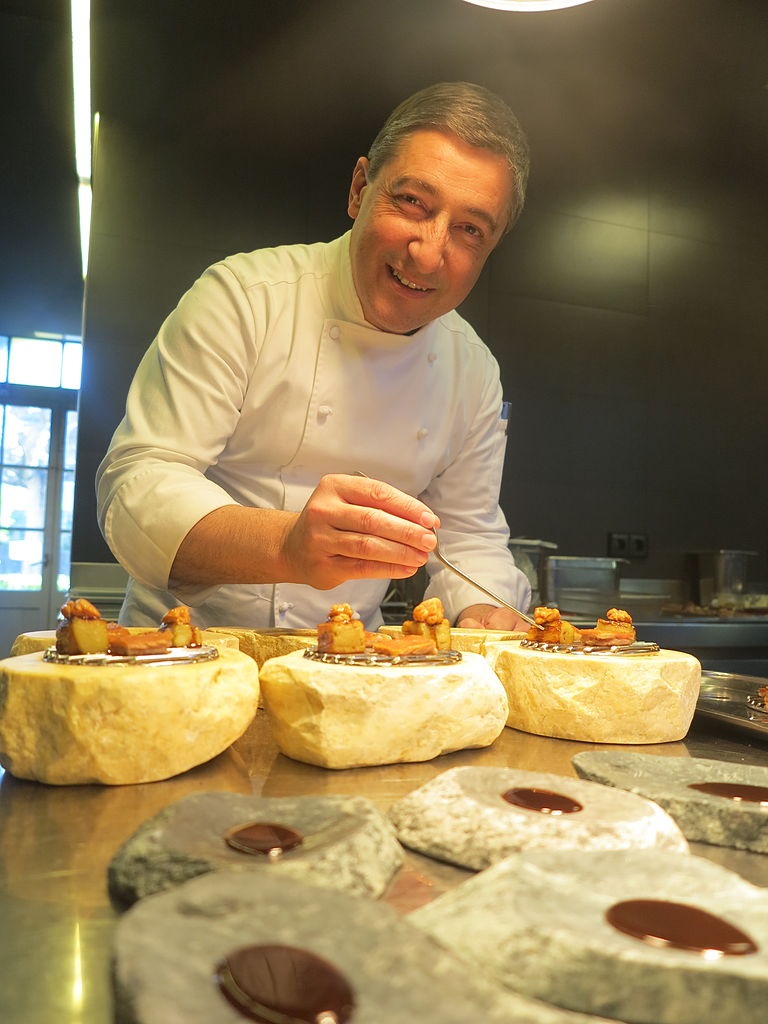 Joan Roca working in the kitchen of Celler de Can Roca

Joan: I respect high standing Catalan traditions. However, I do not stand still in my culinary style. My successful dishes are due to my cautious attention, forming architectural structures which provide the ingredients with visual and physical balance like a well constructed building. Then they are measured so that they do not tumble over when set up on plates, combining well matched colors and liaising the textures. Furthermore, my dishes contain savory, sweet, salty and sour notes, all in total harmony. Additionally, I embrace state of the art culinary technology, employing Sous Vide to create my signature dishes we have been known for.

Margaux: What exactly is a Sous Vide?

Joan: The Sous Vide culinary process is a French term meaning “under vacuum.” It involves vacuum packing food elements in a plastic like baggie and cooking the food at lower temperatures than normal for an extended period of time and then quickly cooling the food . The advantages of sous vide are that the chef receives less shrinkage of the raw materials and they are more moist, full of flavor, and in the restaurant business higher volumes of food can be prepared much faster. This method was originally used during the Persian Empire in the 6th century. We have been employing sous vide since 1996.

Margaux: What are some of your future professional plans?

Joan: To harvest from our botanical garden which contains herbs and fruit. Some of the herbs and fruit are bergamot, basil and cherries. We are planning to continue with our experimenting and investigating of the world’s herbs, aromas and truffles. We are amplifying our essential herbal line, creating new recipes with wine pairing and to expand our clientele.

Margaux: What do you consider your specialty?

Joan: The world of meat, and specially milk fed kid.

Margaux: What are your favorite foreign restaurants to date?

Joan: I have enjoyed numerous lunches and dinners abroad, including Michael Bras in France, Morimoto in Japan and Wylie D. in Manhattan off the top of my think tank.

Margaux: Tell us about your most extraordinary gastronomic combined holiday destination.

Joan: The Kai Seiki gastronomic route in Kyoto, Japan. Kai means breast and Seiki denote stones or pebbles. Historical Kyoto has maintained its ancient gastronomic traditions which were started by medieval Buddhist monks who would either carry servings of food in their pockets for long journeys or be served platters of assorted types of sashimi, rice, marine pickles and cucumbers, sushi, and various udon noodles. This has become Japan’s renovated tapas movement in the 21st century.

Get to Know the Rocas Through Their
Enchanting Hometown 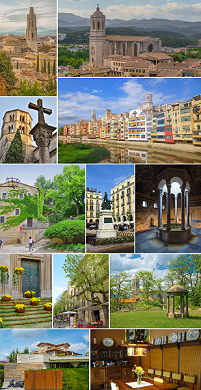 Girona possesses an infinite timelessness and a unique surprise in every step one shall take. Its numerous museums, celebrations, street festivities among the varying layers of history to explore, in a maze of medieval secret nooks and crannies, as well as its wonderful epicurism.

Nestled in an unrivaled location between the mountains and the Mediterranean coast, Girona is one of the best preserved historic cities on the Iberian Peninsula. It was founded by the Romans and later became a Moorish fortress. By 1809, Girona had withstood three invasions by Napoleon’s troops, and since then it has often been called the City of A Thousand Sieges.

The neighborhood of El Call, the medieval Sephardic Jewish quarter, encapsulates a timeless essence with its renowned profoundly steep cobblestone lanes. It is lined with stone townhomes which have formed a rampart along the left bank of the Onyar River, dividing the capital into two halves.

A good starting point to your trip would be to visit the Cathedral, which is accessed by climbing up a flower covered 17th century Baroque stone staircase of exactly 90 steps. The entrance of this 14th century landmark features Romanesque, Gothic and Catalonian Baroque period design. The impressive façade dates back to the 17th and 18th centuries and both the cornice atop and the imposing bell tower are crowned by a dome with a bronze angel weather vane. Upon entrance, through the main door, go into the nave which is one of the broadest Gothic style naves in the world, and continue through the emblematic Cathedral which contains a wealth of sacred theological treasures.

Here one can see both the extraordinary 11th and 12th century Romanesque embroidered tapestry of the Garden of Eden and the 10th century (year 975) Códex Del Beatus, one of the world’s rarest manuscripts from the Book of Apocalypse.

The Museu d’Art , in the former Romanesque and Gothic Episcopal Palace, is situated next to the Cathedral. The Palace Museum has conserved Girona’s wealthy heritage through artworks that span ten centuries. Some of these unique works include the stained glass maker’s table, Saint Peter’s altar piece in the Throne Room by Bernard Martorella, Saint Peter de Roda’s 10th and 11th century stone and wood works depicting the legends of that era, a one of a kind Romanesque wood polichrome and the 15th century alabaster carving of the Virgin of Our Lady of  Besalù.

Even for those like myself who are not Jewish, the Museum of Jewish History is also not to be missed. From the year 890 through 1492, the early settlers from Jerusalem formed the nucleus of Girona’s El Call district.  The Museu d’Historia Dels Jueu’s rooms reveal many aspects of profound traditions, from the synagogue and theological celebrations to ritual baths, Kosher dietary laws and butchers, and dietary customs.

Moving on from the historical monuments, the Rambla de la Libertat is one of Girona’s most popular spots. The tourist Office, boutiques, numerous cafés and open air restaurants and tapas bars line the lovely tree lined Rambla.

Spectauclar strolls from the five bridges connecting the left and the right banks of the city provide excellent views where one can appreciate the cityscapes, the Medieval Districts and the renowned rainbow colored houses on the river banks, as well as the Artisan Craft Markets open all year.

While tradition says that visitors in Roma must throw a coin into the Trevi Fountain to return, and that in Barcelona they must drink from the Canaletes Fountain, in Girona one must kiss the backside of the Lioness Statue! A replica column of the 12th century lioness La Lleona is located in the Sant Feliu Square. This custom had begun as a way for locals to signal to the sentry guarding the closed city walls after the curfew that they were residents and should be permitted entrance.

Next article “CATALONIA IS SPAIN” FORUM (3) »