THE CHARMS OF MADRID SEEN THROUGH LOVING EYRES OF A CALGARIAN

This is Part II of the story of a one-time resident of Madrid who’s still in love with the city after
all these years.
For Part I please see “It’s All About Being Here” in our “Madrid” section.

Author’s note: Send us a few brief impressions in words or sketches of Madrid.
We’d love to have them!

We are going to the dogs! That is, the domineering Madrid dogs leading their masters happily, both being of all sizes, ages and shapes. The dogs, in particular, are often rather roly-poly with shorter than usual legs, but with great curiosity and command of the environment.

From dogs, let’s move on to the beautiful giant antique wooden doors on ancestral buildings, and from there, to groups of classical musicians playing soulful Vivaldi in the middle of a strollers’ street leading to the Corte Inglés department store and Puerta del Sol, the geographic centre of Spain, in the heart of downtown. Food always being paramount in Spain, there is a plethora of cafés and restaurants open from early morning until midnight or later. Eateries offer special dishes from many provinces in Spain. Combine the search for the best tapas bars and restaurants with sunshine and temperate weather right through October, returning in February, with parks such as the elegant Retiro near the Prado Museum. Shoppers can walk for miles finding fashions to suit every price level and taste tantalizingly displayed in shops everywhere, shoes still being a good bargain. (Ensure “Made in Spain” labels when possible!) 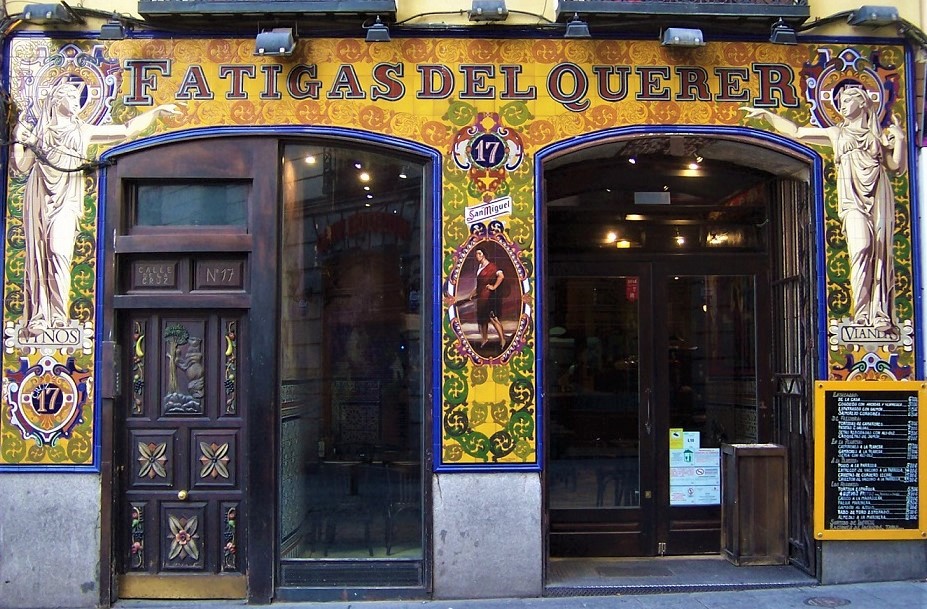 A traditional cafe-bar in Madrid

Bikes and bike routes are becoming popular despite the traffic! You see so much more of Madrid, like the huge green park to the south, the Casa de Campo, and famous architect Calatrava’s angular silver bridge across the Rio Manzanares. ( We have a red Calatrava bridge in Calgary, very contentious $25 million expense but now a favorite of most Calgarians and buskers singing their hearts out too !)

See Riber Bike’s Heri for a solid new rental – or purchase — at his new air conditioned bike shop at Plaza España  (www.riberbike.es). A kinder gentleman can’t be found anywhere, actually Heri is Mexican who’s married to a lovely Spanish lady! The rental prices are low and one can discover so much more in Madrid from a bike seat than on foot or going underground in the Metro from place to place.

Then there is Flamenco in its home in Spain. The writer was once called “Gitana Rubia” or Blonde Gypsy when dancing underground in Cava Baja below Plaza Mayor . The fact that a rival band stole her car while she danced is a bit of a downer! 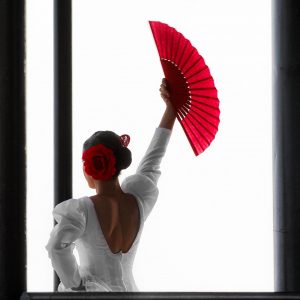 It isn’t the fast feet or the fancy costumes — it is the spirit of the dance that one must communicate from within oneself.

At Amor de Dios Studios in Anton Martín, owner-manager, kind and smart Joaquin San Juan rules! Legendary Flamenca, proudly part-Gypsy dancer, La Tati has danced and taught worldwide for decades and is revered in Spain and almost a saint in Japan. She continues to teach the highest form of Flamenco, not just the furiously staccato footwork and the physical Flamenco like the beauty of a dancer and the beautiful costumes , but the psychology behind the dance form that cannot be explained in words or on paper, even in pictures. Training her devoted students in complex dance techniques, Tati has also awakened hundreds of idealistic young dancers who come to Amor de Dios from across the globe to the brief nature of beauty and life itself! She pauses and gives a short lecture on this, or tells her students stories of growing up in a family of ten children in lower Madrid; Tati’s stories as powerful as the explosive footwork that has lost nothing of its strength since her youth!

It isn’t the fast feet or the fancy costumes — it is the spirit of the dance that one must communicate from within oneself! It might be better communicated when performed on a small stage such as the Villa Rosa in Plaza Santa Ana in Madrid. “Flamenco-ness” is a way of life; it is spiritual and affects how one deals with others outside the dance. Perhaps a heightened awareness of life itself and sensitivity to others and to life experiences, not always easy to handle, comes with being “Flamenco”. Try some classes to feel it !

Yes, the day of the corrida de toros seems to have almost vanished, despite the sex-appeal of the slender torero standing motionless in front of a pair of horns in his mesmerizing “suit of lights”, glittering with hand-embroidered sequins and silver and gold embroideries. Man and bull poise, eying each other in silence before one must die, but sometimes both.

Matador at the final stage of a bullfight, Madrid

The traditional spectacle of Hemingway’s day is declining in favor of football which blares across TV screens even in the smallest bars! The artistry of the bullfight and the fact that the “brave bulls” are apparently allowed to live at least two years longer than the “mansos” or bulls slaughtered for meat has little effect on people who often overlook how the animal that was turned into the shoes, leather belts or purses they may be wearing was dealt with! These people of course are probably not carnivorous though!

Then there is Madrid’s inimitable Sunday morning Rastro (flea market), with its massive though happy crowds! It goes for miles interspersed with cafés and roving musicians. Spanish people one meets in local cafes are friendly and eager to discuss current EU dilemmas, to practice their English, or to learn about your part of the world and try to explain the dilemma of Spain to you. 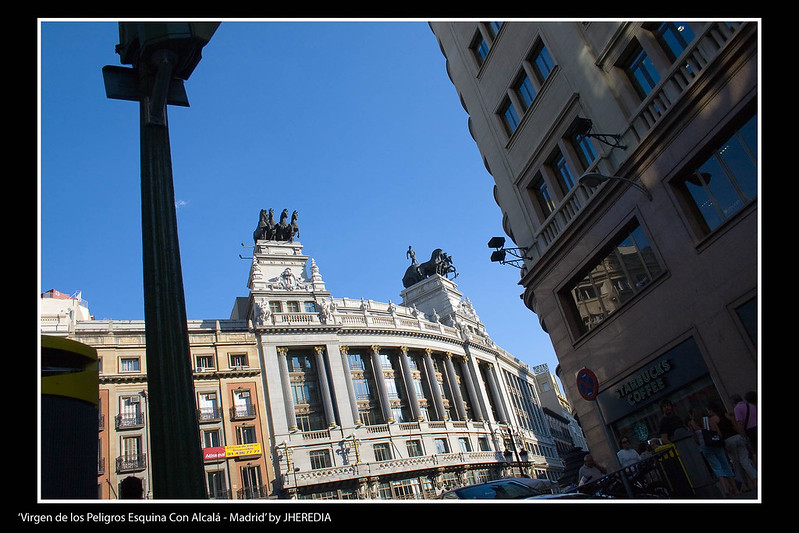 CALLE ALCALA: Look upward at the intricately designed old turrets atop buildings along the Gran Via and the Calle Alcalá to recover one’s sense of meaning and balance

When one tires of incessant chat, maybe it’s time to look upward at the artistic and intricately designed old turrets atop buildings along the Gran Via and the Calle Alcalá to recover one’s sense of meaning and balance in the midst of surging weekend crowds. Picture and wonder about who the architects were who designed them, having fun drawing fantastical rooftops unique to Madrid. Were they inspired by the corridas, dancers, excessive sun, great wine, or Spain’s complex history? All of this and more makes Madrid the unique city that it is, whether the infamous economic crisis is still going on or over!

Judith is a long-time friend and writer of GUIDEPOST equipped with inexhaustible alegría de vivir and TALENT. She used to live in Madrid which she knows inside and out but for some time now she’s back in Calgary, Canada, where she owns Actionco, a language firm. She’s passionate about Flamenco and makes the Amor de Dios studios her second home whenever she’s in Madrid. 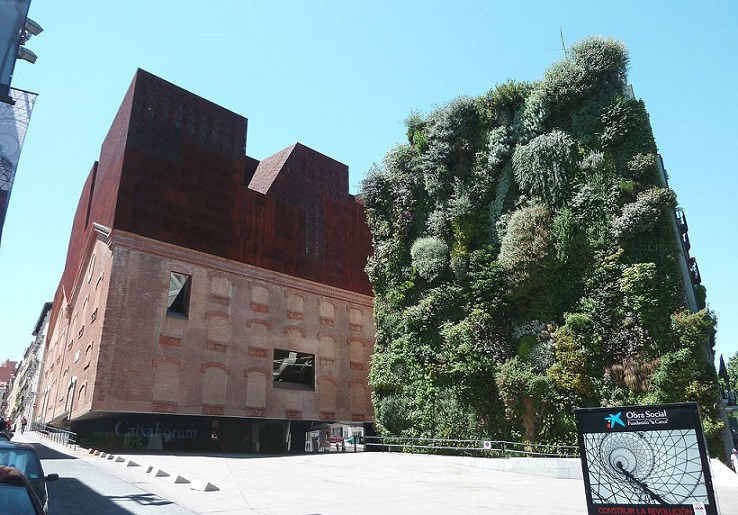