MADRID’S ALMOND BLOSSOM: IT WILL TAKE YOUR BREATH AWAY!

When the almond trees bloom, the Parque de Los Molinos will be calling to you. Which is about NOW! Don’t be deaf to the call. Letting the delicate lovely flowers in great profusion enfold you is a sensorial bliss. And it’s only a dozen Metro stations from Plaza de Callao in the heart of the Spanish capital!

Because this year Madrid is enjoying an unseasonably warm February, by midmonth the almond blossoms have begun to bud. Experts on the subject are predicting that between the 22nd and the 28th of February are the inclusive dates when the splendor of the blossoms will be peaking. There you have it,  a most photogenic scenery for your social networking to boot! 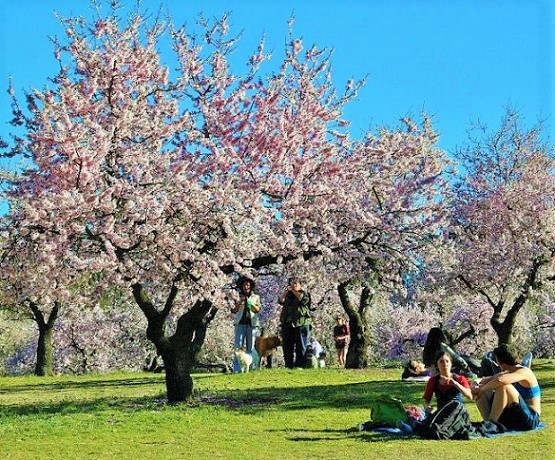 Pack a picnic and chill out. The 25-hectare wooded Parque de Los Molinos in the San Blas-Canillejas district of Madrid is divided into two clearly defined areas: the north, landscaped in the style of Romanticism, and the rustic southern area. Choose your spot.

Los Molinos is an enclosed park with five gates that open onto Calle Alcala in the south, to Calle Juan Ignacio Luca de Tena in the north, the Avenida 25 de Septiembre in the east and Calle Miami in the west.

One TripAdvisor tourist at the end of Feburary 2019 all but gushes: “The almond blossoms were absolutely spectacular. Easily accessible on the metro from central Madrid (line 5, off at Suanzes… metro stop is literally in front of the park).”

This proximity to the Metro, and the fact that Parque de Los Molinos is actually in the vicinity of the bustling Calle de Alcalá, albeit at the much-slower paced end of it, will make it easy for you to dine in highly-rated restaurants nearby, if getting weighed down by a heavy backpack crammed with lunch and snacks  isn’t your idea of enjoying the almond blossoms. These restaurants include Santas (Spanish cuisine), La Tagliatella  (Italian Mediterranean, European cuisines), and Gold Bar Restaurant (Japanese, Spanish, Mediterranean cuisines).

Btw, did you know that because of its early flowering, the almond tree was a symbol of watchfulness and promise in the Hebrew Bible? In Valencia’s Torrent municipality, Spain, the “entrance of the flower” (La entrada de la flor) takes place every first of February. Rooted in the 17th century, the festivity is celebrated by the Confrerie of the Mother of God by delivering to the Virgin Mary a branch of the first tree to flower after winter. That’s the almond tree, of course. 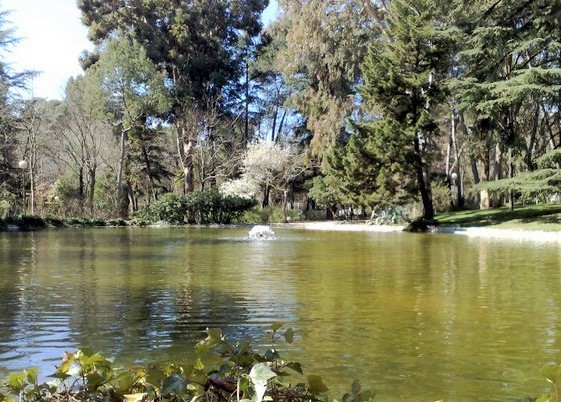 Pond in the park.

Previous article « THE SECRET BEHIND THE SUCCESS OF LA GRAMOLA DISCOS

Next article NONCHALANT NO MORE »