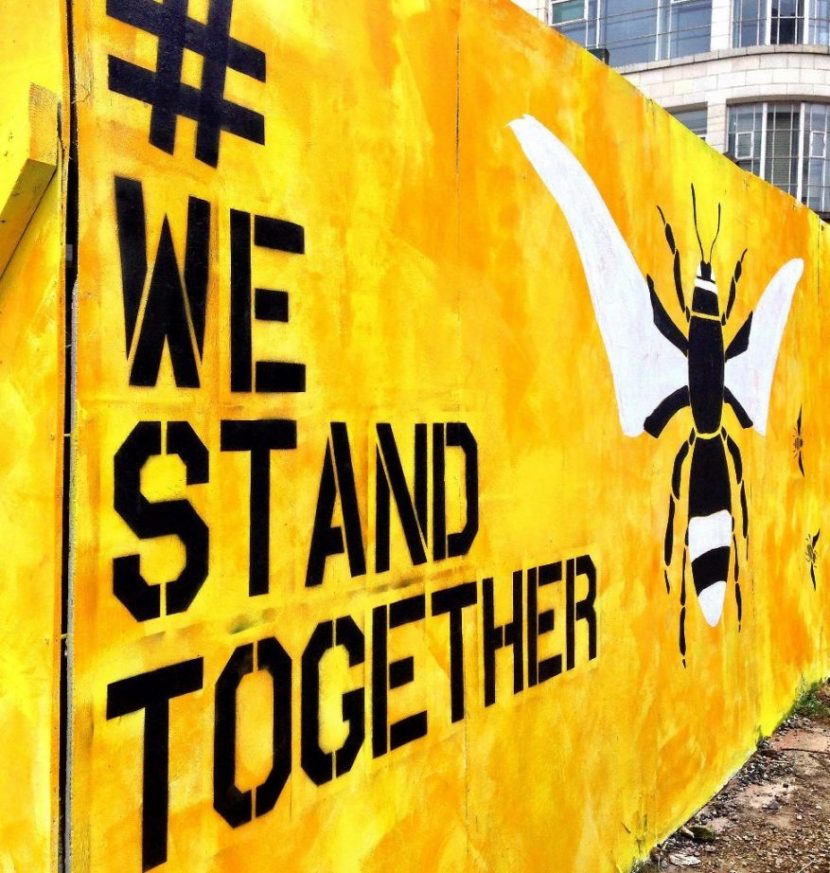 Ed’s Note: In view of the apparent upsurge of terrorism in Europe, the most recent of which are the London Bridge attacks (3 June 2017) on the heels of the Manchester Arena (22 May 2017), GUIDEPOST is publishing “Terrorism” by Max Roser and Mohamed Nagdy as background information on the terrible phenomenon. This is a true copy of that work, though incomplete due to space constraints. We urge the reader to go to https://ourworldindata.org/terrorism/#historical-terrorism  for the complete work.
Despite leaving out sections of “Terrorism”, the work remains lengthy. For this reason, we are dividing the work into two parts.

Terrorism is usually understood as the use or threat of violence to further a political cause. There is no universally agreed definition of terrorism making it a difficult object to quantify. For clarity, the Data Quality & Definitions section below carefully outlines the definition used in constructing the dataset presented here and compares it with the legal definition in the UK.*  While acts of terrorism across the globe have increased markedly in recent decades, in most parts of the world it continues to be a relatively rare event and is instead focused in particular countries or regions of instability.

Terrorism is not a 21st century phenomenon and has its roots in early resistance and political movements. The Sicarii were an early Jewish terrorist organisation founded in the first century AD with the goal of overthrowing the Romans in the Middle East. Judas of Galilee, leader of the Zealots and a key influence on the Sicarii, believed that the Jews should be ruled by God alone and that armed resistance was necessary.

Unlike the Zealots, the Sicarii targeted other Jews they believed to be collaborators or traitors to the cause. The tactics employed by the Sicarii were detailed by the historian Josephus around 50AD: “they would mingle with the crowd, carrying short daggers concealed under their clothing, with which they stabbed their enemies. Then when they fell, the murderers would join in the cries of indignation and, through this plausible behavior, avoided discovery.”

There are many other key examples of terrorism throughout history before the modern terrorism of the 20th century. Guy Fawkes’ failed attempt at reinstating a Catholic monarch is an example of an early terrorist plot motivated by religion. Meanwhile, The Reign of Terror during the French Revolution is an example of state terrorism.

I.2 Modern terrorism after the second world war

The use of terrorism to further a political cause has accelerated in recent years. Modern terrorism largely came into being after the Second World War with the rise of nationalist movements in the old empires of the European powers. These early anti-colonial movements recognised the ability of terrorism to both generate publicity for the cause and influence global policy. Bruce Hoffman, director of the Centre of Security Studies at Georgetown University writes that, “The ability of these groups to mobilize sympathy and support outside the narrow confines of their actual “theaters of operation” thus taught a powerful lesson to similarly aggrieved peoples elsewhere, who now saw in terrorism an effective means of transforming hitherto local conflicts into international issues.” This development paved the way for international terrorism in the 1960s. 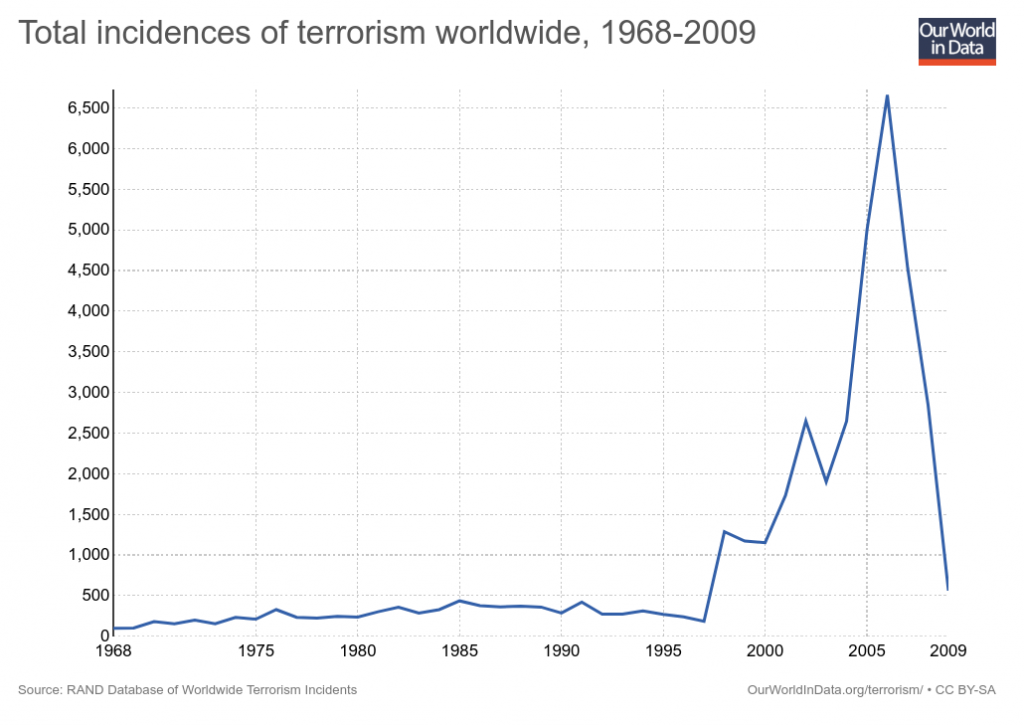 The attacks of 11 September 2001, known as 9/11, marked a turning point in world history and the beginning of the ‘War on Terror’. The attacks are estimated to have killed 3000 people making it the deadliest terrorist incident in human history. The subsequent War on Terror led to the invasion of Afghanistan in 2001 and Iraq in 2003. . .Terrorism pre-9/11 was concentrated in Latin America and Asia, but shifted to the Middle East post-9/11–Peru, Chile and El Salvador completely disappear from the top 10. More than a quarter of all terrorist attacks between 9/11 and 2008 took place in Iraq.

I.4 Airline hijackings and international terrorism

The deadliest terrorist attacks in history, the 9/11 attacks on the World Trade Center, were the result of two plane hijackings. Yet aviation terrorism has a long history and its development marks the beginning of international terrorism. On 22 July 1968, the Popular Front for the Liberation of Palestine (PFLP) hijacked Israeli El Al Flight 426 from London to Tel Aviv via Rome. They diverted the flight to Algiers where they held the Israeli hostages for several days while they negotiated the release of Arab prisoners in exchange for the hostages. Once the terms were agreed the hostages were released with no fatalities.

The success of this early hijacking made it an increasingly popular weapon of the Palestinian Liberation Organisation (PLO). In 1976 Zehdi Terzi, the first PLO representative to the United Nations, stated that the “first several hijackings aroused the consciousness of the world and awakened the media and world opinion much more–and more effectively–than 20 years of pleading at the United Nations.

Terrorism in the Spanish Basque Country: Deaths attributed to ETA – The Economist
www.economnode/16996966?story_id=16996966ist.com/

While terrorism in the Middle East has spiked in recent years, there have been successes in combating terrorism elsewhere. One notable example is the ETA, the Basque separatist movement in Spain,which put down arms in 2011. [Bold type provided]

I.6 The risk of terrorism in a broader perspective

Despite the intense media focus on terrorist activity around the world, the numbers of people actually killed by terrorist attacks has remained low. Terrorism only killed 13,000 in 2010, a relatively low number when compared with other types of violent death, namely armed conflict and interpersonal violence. 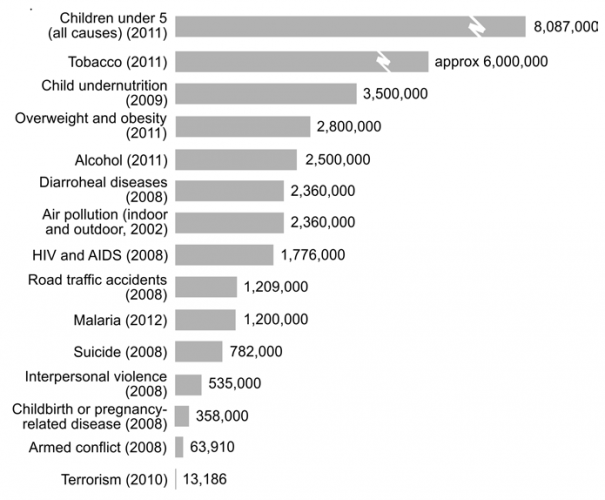 For Part 2 go to https://www.guidepost.es/terrorism-part-2/

Previous article « TERRORISM ! (PART 2)
Next article AMERICAN CLUB OF MADRID IS DOING IT AGAIN — LOTS OF GREAT EVENTS THIS JUNE! »