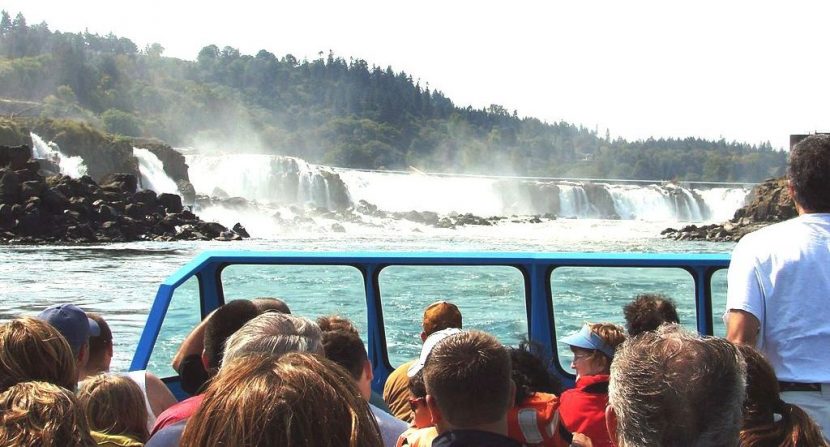 Visitors view Willamette Falls from a jet boat, the area being one of the first to be populated when
the wagon trains came West. Tapping the resources offered by the waterfalls,
the pioneers built mills and farmed nearby.
—
–
by Mary Foran
–
–
The heat rippled up from the vast fields of grain, high on the Eastern Oregon plateaus, nary a tree or bush in sight. It’s the Wheat Farmer’s Territory, tilled by huge combines and tractors, irrigated by specially arched pipe sprinklers which awed these city slickers for the work they entailed and the sheer enormity of their undertaking: being the breadbasket to the world!
– 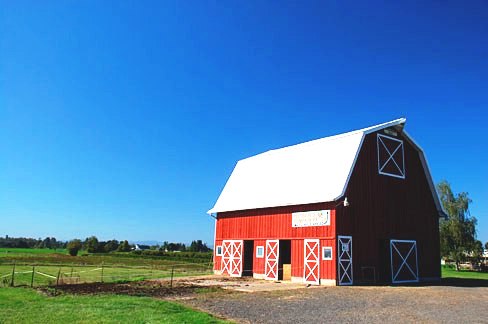 We saw mile after mile of wheat-sown fields, with the very occasional farmer’s house-and-barn dotting the “empty quarter” of the map. There were the very occasional, very small towns trying to survive the isolation, such as Athena, Helix, and Holdman, abandoned shacks and old school houses, and gullies and washes where hawks sought partridges and mice.
–

If it weren’t for the farmers eking out an existence there, the word “desolation” would come to mind; the whole trip gave me a better understanding of how difficult it would be to govern a state which is basically schizophrenic: agriculturally-based on the one hand, and filled with Metro-area newcomers and city-folk on the other!
– 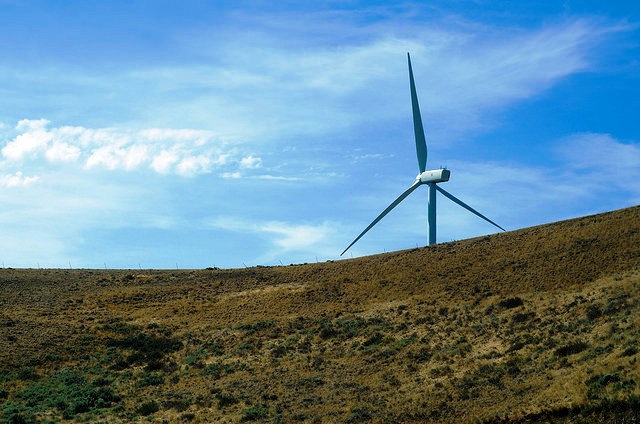 Calmly and majestically draining the NorthWestern Zone, lending its hydroelectric power and grain-barging to the Portland Ports and city area, is the Mighty Columbia River, wide and powerful and blue against the brownish hills of the Eastern Sectors of the NorthWestern States. The Washington State hills are topped by exotic, space-age designed windmills (wind turbines) which seem to move very slowly in the constant Columbia Gorge wind. They make one wonder why they redesigned the already-proven middle-age models of Europe!
–

Well, at least the annoying and persistent winds of the area are doing some good for the electric grid, as is the constant sunshine, with solar panel farms also found along the way.
–
Wildfires have ruined acres of farmland, and many forests in the Gorge, arson, and lightning strikes being mostly the culprits.
–
Heading back to town, traffic piled up on the freeways which slice through the vastness. The City itself dazzled with its waterfront skyscrapers and bridges, twinkling in the early-evening light. What a contrast between the isolation of Eastern Oregon and the city congestion of Western Oregon, in this most historic Pioneer Territory.
– 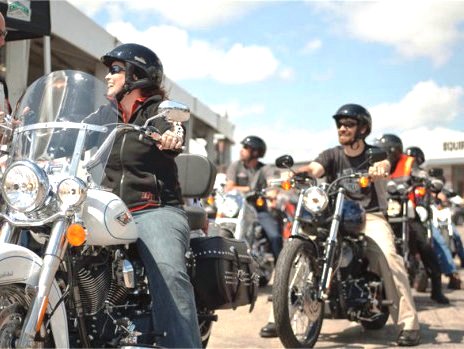 The Oregon Trail is such a distant memory that “Oregon City” has to fight to keep the legend of the Settlers alive with a very interesting museum. The view of Willamette Falls from the “Oregon City Heights” is one of the Portland Area favorites and well-worth a visit to this historic Pioneer town.
–

The main purpose of our trip to the East was to follow the trails of the Motorcycle Bike Week Rallyers in and around Pendleton, Oregon. It was weeks ahead of the September Pendleton Round-Up Rodeo Show, but the Bikers put on a race and even had a convention in the Pendleton Convention Hall! As we drove on the precarious country roads we followed many “Dudes” and “Dudettes” on their many brands of motorcycles. We heard their engines roar to life late into the night and early in the morning, and they came rumbling through town throughout the day, their “hogs” shining in the sun.
–
We explored the historic Western town on foot and took the Umatilla River Walk while the Bikers convened.
– 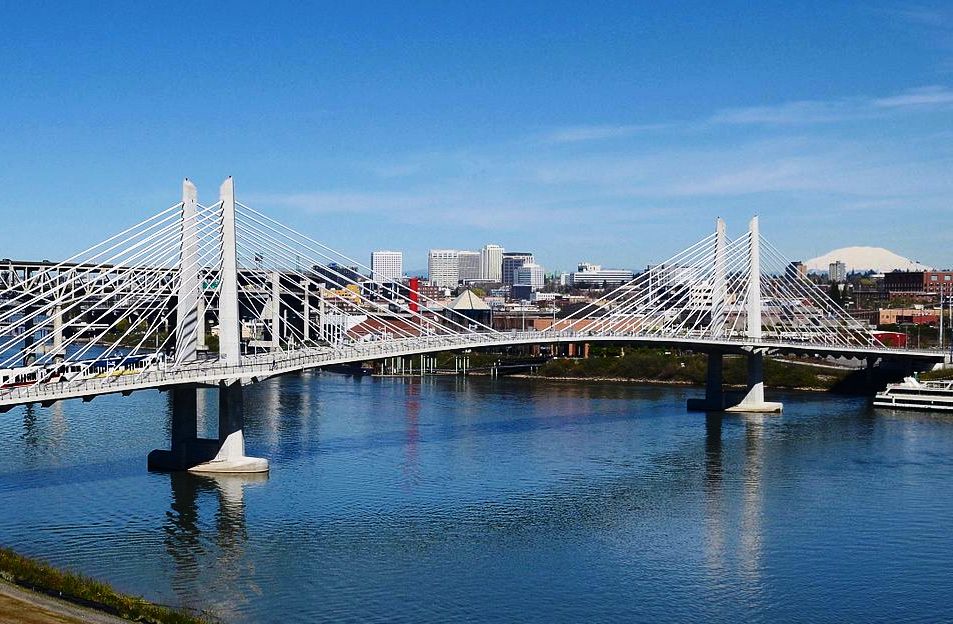 The Tilikum Crossing built by TriMet, the Portland metropolitan area’s transit authority: the “Californication” of Portland

While the Eastern towns are pining away, businesses closing left, right and center, the Metropolitan Area is booming, spreading out into the surrounding farmlands. Some Old Oregonians feel that the area has become “Californicated” to the point where it’s hardly recognizable. Now, ahem, the definition of “Californication” is an old Oregon snide remark about our neighbors to the south. It refers to the proliferation of strip malls and cubicle, and condominium living quarters, and suburban housing developments for the influx of out-of-staters, mostly moving up from California in search of “the grass is always greener” on the other side of the border! Oregonians of any stripe feel that California itself has been ruined by rampant construction, over-population, and conversely, the trend towards “yuppification” which makes EVERYTHING more expensive. “Yuppy’s” are the nouveau-riche or “wannabes” who tend to join wine-and-cheese clubs and shop at exclusive stores.
–

Now, there are some very interesting local wineries, and I am so glad that cheeses-of-the-world are now available in local grocery stores since I am a cheese fanatic, but down-to-earth Oregonians aren’t fooled by all the hype.
–
We, like our Eastern Oregon compatriots, believe to our very bones:
–

“A Simple Life is a Better Life”! 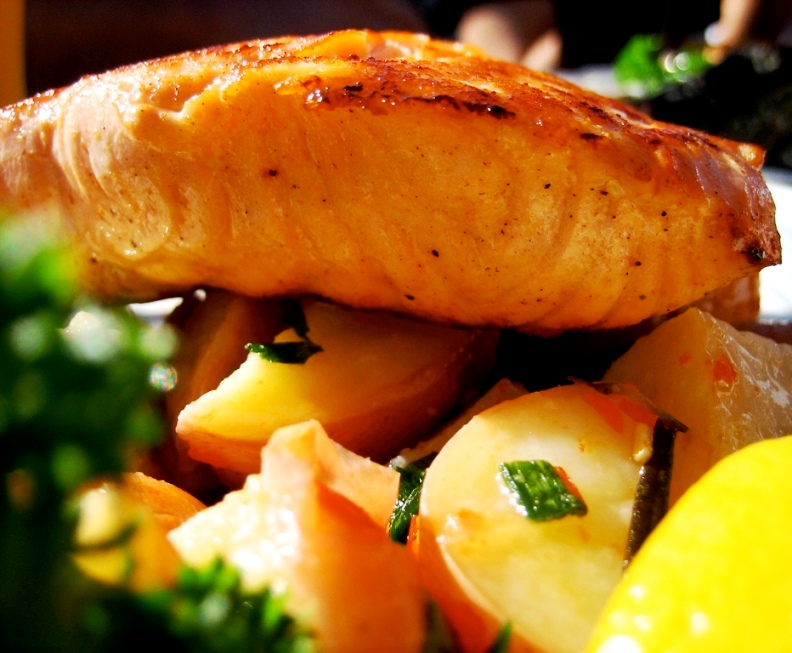 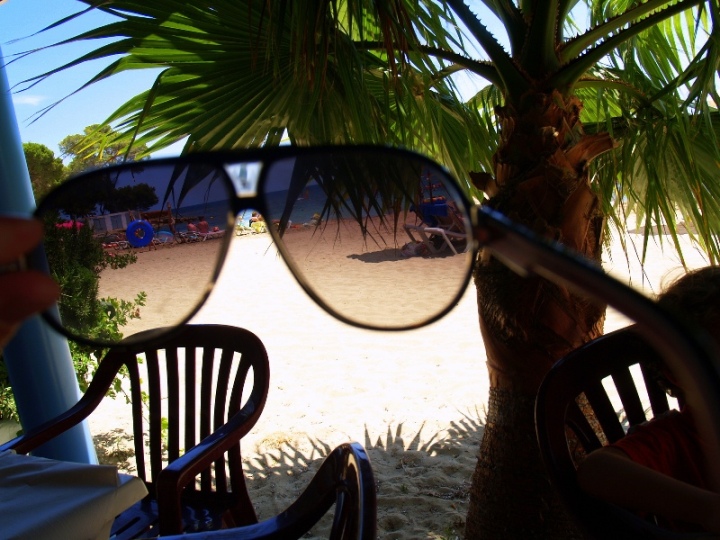