STATESIDE STORIES REVIVED: A VISIT TO THE ZOO!

The Oregon Zoo has a long and controversial history, and great international
fame. It began in 1888 with 2 bears. There are now 1,955 animals on
display on 64 acres. Some would say that animals should
NEVER be kept outside their natural habitats in the
wild. A point well-made, but what about the
Educational Mission  of “The
Zoo People”?

The Oregon (Portland) Zoo is now almost nothing like I remembered it was “in the old days” of red elephant Zoo keys that you slipped into audio boxes which were designed to inform young minds. The Zoo jingle went like this: “All the animals in the Zoo are jumping up and down for you…” (I don’t quite recall the rest!) 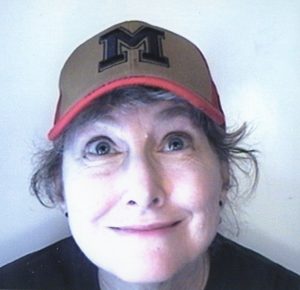 “I felt like a kid in a candy store”

I admit, however, that the “Zoo People” have done a wonderful restoration, renovation, rebuilding and reorganizing job of it: The Zoo has truly improved! Fit, fat, funny and fun, the people made their way through the Zoo Maze of pathways and exhibits, and crowds of animal onlookers stared through the glass at the bright-eyed creatures, who stared right back. On a sunny summer day as it was that day, the animals mostly slept in the shade, or sought the coolness of their water features which boasted pristine cleanliness.

(I felt like a “kid in a candy store” wending my way through tunnels and down steps to watch underwater ballets being performed by fish, fowl and predators.)

There were the usual “lions, tigers and bears” of The Land of Oz, but so much, much more to see and appreciate. I actually had to go around and through and under twice to take it all in! 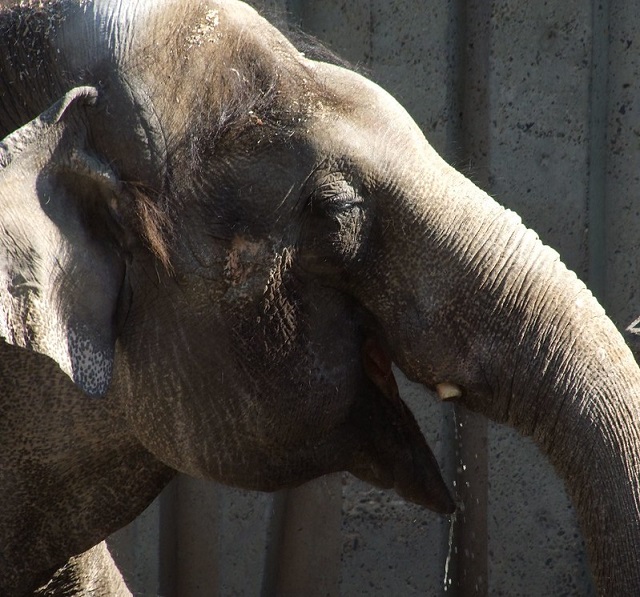 On Oregon Zoo’s Facebook page: “Here’s a big reason to smile: China has announced it will ban all ivory trade by the end of 2017.” The sheer mention of the announcement “help[s] species survive Mankind”

Some would say that animals should NEVER be kept outside their natural habitats in the wild. A point well-made, but what about the Educational Mission of “The Zoo People”? To me it seemed so very interesting and so much fun for families and visitors from near and far, that I can’t see anything but good coming from their conservation efforts:

2. To give “The Peoples”(mostly city-dwellers) a glimpse of wildness.

3. To educate the new generations in that old 60s idea that is now quite under siege: ECOLOGY–the understanding of the symbiotic interrelationships among animals and ecosystems, and US.

To see the astonishment and delight on the faces of children when they see creatures up close, and perhaps for the very first time, is very rewarding for an “old folk” like myself. To see their parents patiently answering their questions for the thousandth time, putting up with their squeals of joy and awe, and rambunctious antics, is positively great fun!

In the current non-politically correct climate, I am not going to racially describe anyone, including myself, but there seemed to be quite a few “FURIN” visitors enjoying themselves immensely!

Suffice to say that “great fun was had by all” in the exact words of the late and grand GP society editor, Jean Allen.

The Oregon Zoo has a long and controversial history, and great international fame. Peak season is from May 27th, 2017 to September 4th, 2017, and then comes the Fall, Winter and Spring season from September 5th, through May 25th, 2018. Christmas Day, December 25th, is the only day of the year that the Zoo closes its doors. For your traveling information, there is a 20% discount for groups over 20, and The Rules include:

A. No Smokimg
B. No Weapons or Fireworks!
C. No Alcohol!
D. No Pets (except for registered service animals)
E. No Balloons, balls, skateboards, etc. (to make the experience as focused as possible!)

The Zoo began in 1888 with 2 bears. There are now 1,955 animals on display on 64 acres in what is known as Washington, very close to the heart of the city but definitely in the hills.

It was the birth of “Packy” the Asian elephant on April 14th, 1962 which brought an avalanche of fame to the Zoo ($14.95 for adults, with discounts for Seniors, Military, Youth, and sprouts under 2 enter free. Packy was euthanized on February 9th, 2017 at the age of 55, after suffering from Tuberculosis, which could not be cured.)

If you have the notion to See America’s Zoos, and this one in particular, log onto etickets@oregonzoo.org.

A special treat for Music Lovers are the summer concerts which are included in your entrance fee, rain or shine. The concerts began in 1979, and provide a venue for young, up-and-coming groups from around the nation. 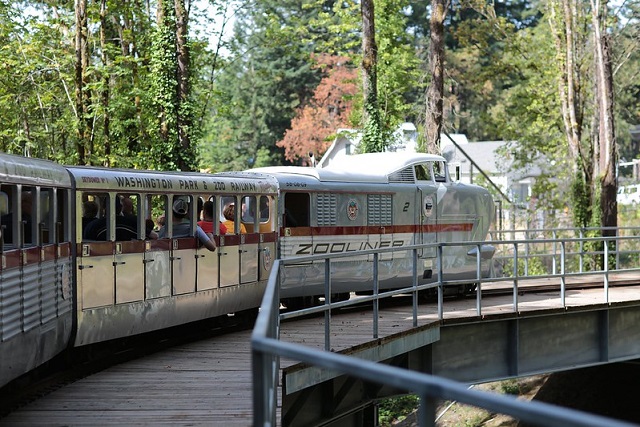 If a miniature train ride is your desire, the scaled-down Washington Park Zoo Train connects to Portland’s International Rose Test Garden, near the Japanese Gardens(Portland has many sister-city relationships in its roster). Portland has been known as “The City of Roses”, then “The City of Bridges” as crossings multiplied over the Willamette River which flows through the Metropolis, joining the Columbia River out to the Pacific Ocean.

The Oregon Zoo is a member of The American Association of Zoos and Aquariums. On its endangered species survival list are 21 endangered and/or threatened species, including the California Condors, Asian Elephants, and recently African lions and Polar Bears (I even saw a real Bald Eagle!)

The Zoo is accessible by the region’s Max light rail system and buses, and there are even free shuttles you can hop on to get to parking. Parking is a crunch at times, and definitely not free. They have a nice upscale gift shop and many snack stands, a cafeteria-style restaurant and cafes with indoor/outdoor seating.

I got confused, as I usually do, in the labyrinthine pathways hither and yon. It is a busy place and full of an air of Discovery! Maps are available and come in quite handy, and Zoo guides are there to help you if you seem lost or want to ask questions.

Informational placards are strategically-placed and give the visitor details at each well-tended exhibit. There are new-style Zoo keys for the children, who still have audio lessons to learn about the animals they are seeing, perhaps for the first time!

The breeding programs at the Zoo have had their ups and downs, but in general have been very successful. For example, the California Condor program, started by the San Diego  Wild Animal Park and the Los Angeles Zoo, has plans to breed the condors for release into the wild, to save the species from extinction. California Condors are a bit smaller than the South American variety, the Andean Condor, whose wing spread is truly amazing.

A new-ish exhibit I especially found appropriate was the Great Northwest offerings, highlighting local wildlife. A simulated Farm has also been established which includes domesticated animals such as Chickens, goats, rabbits, and even the now-famous Guinea Pigs, those lovable little darlings often kept as pets.

Also highlighted are the flora and fauna of the famous and scenic Oregon Coast: sea otters, harbor seals, tide pool inhabitants such as sea anemones, sea stars. sea urchins, and much more.

Question: How can we preserve species in the world if we don’t even know what they look like, or how they behave?

Children love to learn about animals, and the Zoo has provided a well-thought-out, educational way to help them enter into the Natural World. Many local philanthropic donors and the local METRO government body have really outdone themselves in conscientiousness at the Oregon Zoo. Some complain that it is an all too commercial enterprise, but something has to pay for tons and tons of animal feed and upkeep! (The Aviary itself is a gem for ornithologists and visitors.) 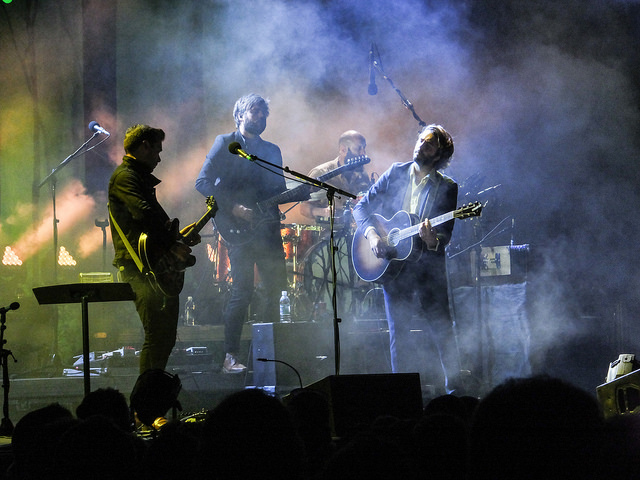 Band at the Music Arena

As dusk approached, visitors flocked to the modern Music Arena, laying blankets on the green grass, baby carriages at the ready and coolers of food and drink, and toddlers in tow. To my right was a western-dressed family speaking Arabic. To my left was a Great-grandmother caring for her grown children’s young, who was about to fly to Hawaii for vacation and enjoy the sun, sand and surf. She was 67, she told me, and was fit as a fiddle and raring to go!

I bowed out to hike back to my truck and beat the evening traffic, and a wonderful day came to a close! 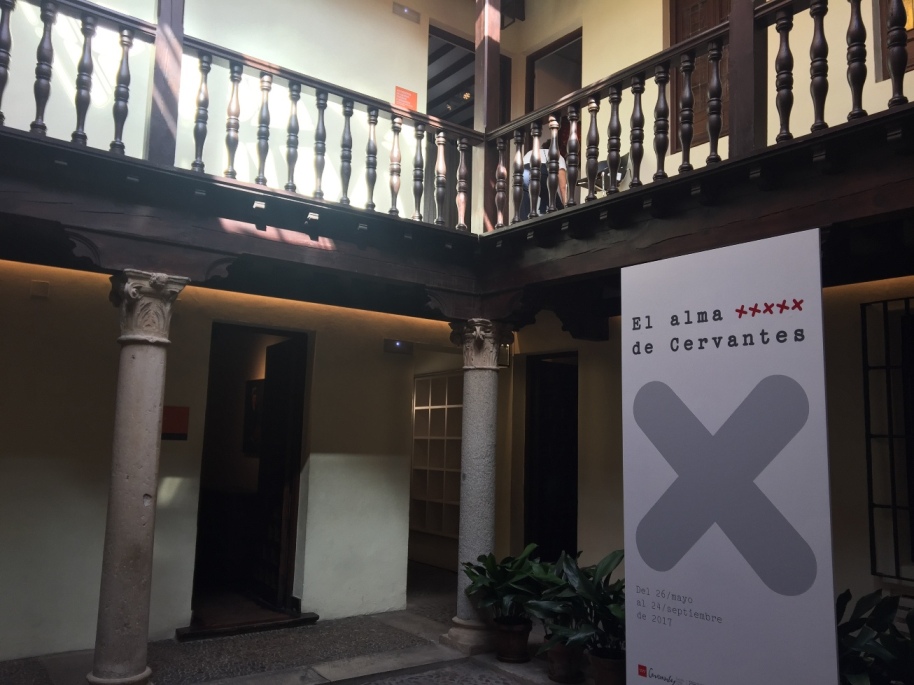