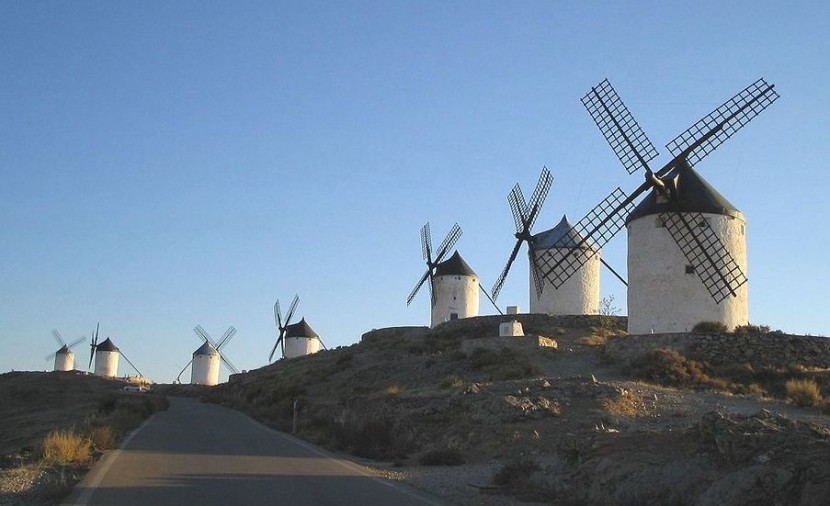 President Obama is on the warpath against global warming. He has unveiled plans to cut power plant carbon emissions by one-third, with strong opposition from States run and fueled by the coal industry. Here is a look at alternative energy sources in Spain and America.

Towering over 100 feet high, with three to four giant arms, wind turbines stealthily suck the energy out of steady winds and turn that energy, which would be wasted otherwise, into electric power to run businesses and homes. Like the giants that Don Quixote jousted with in Campo de Criptana in La Mancha, Spain in Cervantes’ Golden Age tale, wind energy machines have been doing man’s work for centuries, in Holland, on American farms, and in the heart of Spain. Now there are wind farms in this country generating electrical energy for now and the future.

In states like Oregon where wind power is popular, President Obama had blocked the ownership of wind farm by Chinese nationals, saying the wind farm was too close to Naval Weapons Systems Training Facility in Boardman where drones were tested. The Chinese sued, but President Obama prevailed,citing National Security concerns.

Wind turbines can be combined with solar cells, to amp the wattage. Solar panels, by the way, are becoming a popular addition to homes and businesses across America, and even President Obama and the First Family have installed solar panels on the White House roof to add their personal input to the cause of alternative energy options. Not the first President to add solar panels, Obama was preceded in this by Jimmy Carter who spent $30,000 dollars on a solar water-heating system for the West Wing offices in the late 1970’s. Ronald Reagan, however, took the system out when he got into office. President George W. Bush powered a maintenance building, some of the mansion, and heated the White House pool with solar energy.

The idea, of course, is to reduce dependence on foreign supplies of energy and cut emissions blamed for global warming and health factors.

The Ministry of Tourism’s motto when I was in Spain was “Todo bajo el Sol”. Spain is so known for its sunshine that it is no surprise that one of Europe’s largest solar energy facilities is just outside of Seville, Spain. Solar panels may not be pretty in whitewashed villages, but what a marvelous alternative to dangerous nuclear power plants and coal.

In Oregon, where I am located now, water power is abundant, with many dams having been built on the great Columbia River which winds its way down from the Canadian Rockies. But wind and solar power are less harmful to the environment than dams which block salmon runs upstream.

Isn’t it nice to have solutions?

Hillary Clinton: “Down with the Cuban embargo!”

Hillary Clinton on her visit to Spain as Secretary of State

Hillary Clinton, in her new memoires called Hard Choices said she urged President Obama to ease economic sanctions on Cuba while she was Secretary of State. The embargo, she said, “wasn’t achieving its goals and it was holding back our broader agenda across Latin America.” This was quoted Hispanicallyspeaking.com.

Clinton, the wife of former President Bill Clinton, is seen as the early favorite for the 2016 Democratic presidential nomination, although she has not officially said if she plans to run or not.

Washington imposed the economic sanctions on Cuba in late 1962. CubaNow, a group that favors improved ties between Washington and Havana,”welcomed Clinton’s comments” according to the article…

Melanie Griffith recently filed for divorce from the equally-famous actor Antonio Banderas, citing “irreconcilable differences”. Griffith, 56 and Banderas, 53 will have joint custody of their daughter Stella del Carmen until she turns 18 on September 24th. Alimony is also in the works for a romance that started on the set of Fernando Trueba’s 1995 comedy “Two Much”. Griffith has two other children from a previous marriage, Alexander and Dakota. They were married in London on May 14th, 1996…

The New York Times may not speak Spanish but . . .

The New York Times has a new principal owner, the Mexican magnate Carlos Slim, holding 17 percent of the capital, while his friend, Alessandro Proto, President of the Italian group, holds 2 percent. Proto is a shareholder of Prisa (publisher of El País) in Spain, of the British Sky Broadcasting Group in Britain and of the Rizzoli-Corriere della Sera Group in Italy. They noted that the editorial line of the New York paper will remain in the hands of the original shareholders, the Ochs-Sulzberger family…

Mars in Obama’s line of vision

NASA is still abuzz about President Barack Obama’s recent speech at the Kennedy Space Center in Florida, in which he outlined America’s goals for future space exploration and adventures. He laid out ideas for a new spacecraft for astronauts to ride to the International Space Station and a powerful new rocket. He promised many new technologies to protect space travelers from radiation and other hazards.”By 2025, we expect new spacecraft designed for long journeys to allow us to begin the first-ever crewed missions beyond the moon into deep space. We’ll start by sending astronauts to an asteroid for the first time in history. By the mid-2030s, I believe we can send humans to orbit Mars and return them safely to Earth. And a landing on Mars will follow. And I expect to be around to see it”. Source: NASA.com.

Previous article « THE TCHAIKOVSKY SYMPHONY ORCHESTRA WOWS MUSIC LOVERS IN MADRID
Next article BE AN EARLY BIRD, BUY YOUR TICKET FOR THE ACM GALA NOW! »