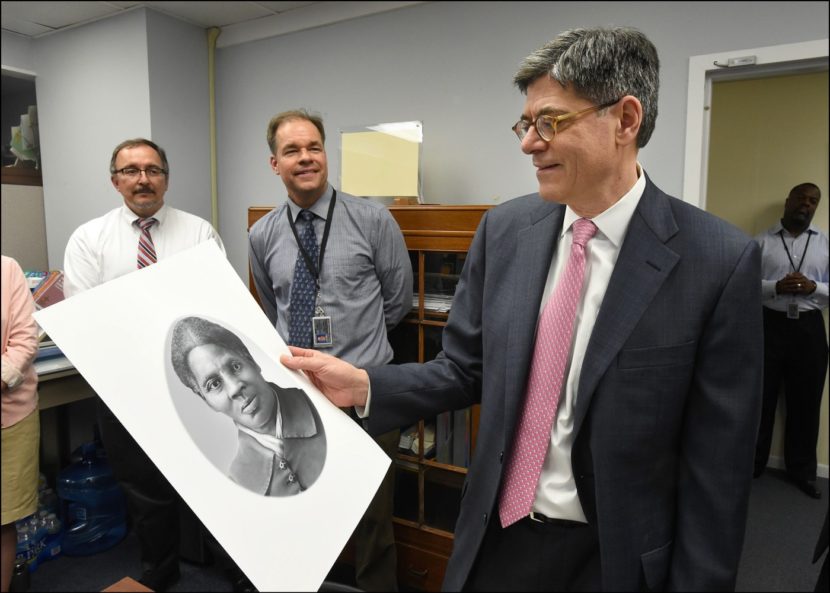 Treasury Secretary  Jacob Lew looks at a rendering of Harriet Tubman for the new $20,
during a visit Thursday to the Bureau of Engraving and Printing.
Photo: Chris Taylor, Department of Treasury
–

You save it, you spend it, you hoard it, you lend it, and it seems you can never have enough of it to go around!

In the U.S.A. paper money has not been considered as pretty as, say, Canada’s notes, or other countries’ currencies. Just that plain, old Greenish hue, in ones, fives, tens, twenties, fifties and one-hundreds or more, which are difficult to spend anyway.

Harriet Tubman, a black woman abolitionist and former slave herself, is slated to be the new face on the U.S. $20 bill front, with the visage of the war-hero President Andrew Jackson, son of Scots-Irish immigrants and a slave-holder and Native American fighter, on the back.

In an article by Samantha Masunaga of the LA Times, the writer quotes the Treasury Secretary Jacob J. Lew as saying that Tubman would appear on the front of the bill and Jackson would appear on the back along with an image of the White House. The release of the bill in 2020 would coincide with the 100th anniversary of the passage of the 19th amendment to the Constitution which gave women the right to vote. The $5 and the $10 bills will also be updated.

Alexander Hamilton will remain on the front of the $10 bill, with the suffrage leaders Sojourner Truth, Susan B. Anthony, Elizabeth Cady Stanton, Alice Paul and Lucretia Mott gracing the back. The recent play “Hamilton”, telling the story of his life, has won the Pulitzer Prize for best drama, and was performed at the White House with President Barack Obama in attendance.

The back side of the $5 bill will be redesigned to include opera singer Marian Anderson, First Lady Eleanor Roosevelt, and civil rights leader Martin Luther King Jr.

The last time a woman appeared on a paper note in the U.S. was in the late 1800s, the writer says, when First Lady Martha Washington appeared on the $1 silver certificate. The Native American guide to Lewis and Clark, Pocahontas, was on the $20 bill from 1865 to 1869.

The $20 bill, what with inflation and all, is much more popular than the $10, although I find it psychologically less stressful to spend $10s than $20s. Frugality is a way of life!

The facts are, according to the writer, that there were 8.6 billion $20 bills in circulation as of December 31st, 2015 compared with 1.9 billion $10 bills.(ATMs only give out $20s it seems!), according to the Board of Governors of the Federal Reserve.

The U.S. civil war left bad feelings on both sides of the slavery question, and the country has been trying to heal the wounds of that war ever since. Some think the Treasury move is “political correctness” while others think it is high time some recognition was given to outstanding Americans who fought for freedom and equality against great odds.

It’s a shame we have to wait until 2020 to see the bills in action, but the Treasury has to make them secure. A counterfeit Harriet Tubman just wouldn’t do!

Some would say that we print up too much money as it is, and had better start budgeting better or face the consequences. Yet this move by the Treasury is a true sign of the times, showing that even the creaky old government bureaucracy can be moved to action by history-making societal changes.

All in all, it shows that Money Matters!

Next article GUIDEPOST REPRINT: STRANGER “HAVING A WONDERFUL TIME”, 30 May 1986 »