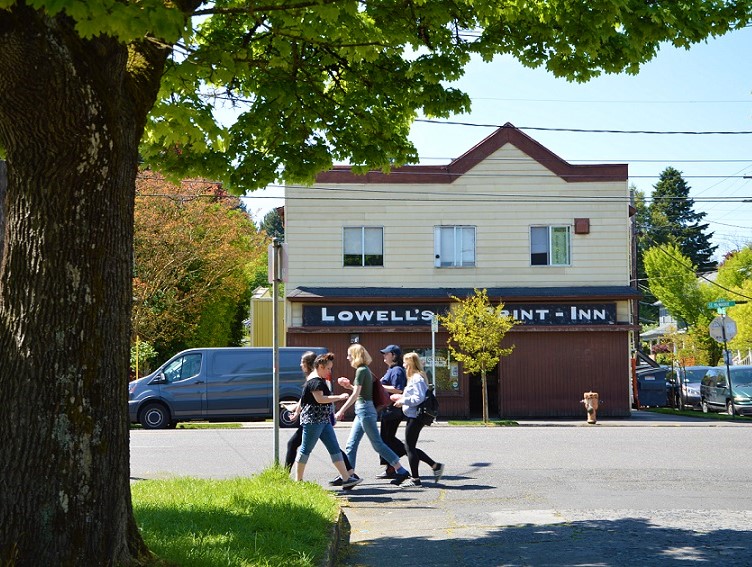 Rambling around town in the beginnings of May, en route to my second shift of the day, I came across an old building in an older part of the city which startled me with its blaringly large white sign which read, and I am not joshing, â€śLowellâ€™s Print-Innâ€ť.

Now I donâ€™t know anything about the history of the old building nor if it is still in business, but all I could think of was taking a picture of it for Guidepostâ€™s longtime publisher, Dan Lowell, who for many years was in charge of the print version of Guidepost as he is now in charge of the online version.

It was the most evocative, interesting and coincidental sight to see on my way to what is rather boring work at times, and I vowed then and there to come back and take pictures to prove the strange coincidence.

Darn it though, the bright new green leaves of a little tree in front of the building obscured the apostrophe, and the traffic was dangerously fast along Milwaukee Ave. The shop is in the SE section of the city which started out being known as the â€śCity of Rosesâ€ť(Rose Festival is in June), then went through a period when being considered â€śWeirdâ€ť was â€śCoolâ€ť. Now it is often referred to as Bridgetown to celebrate all the many bridges, both pedestrian and otherwise, which span the Willamette River at Portland, Oregon. 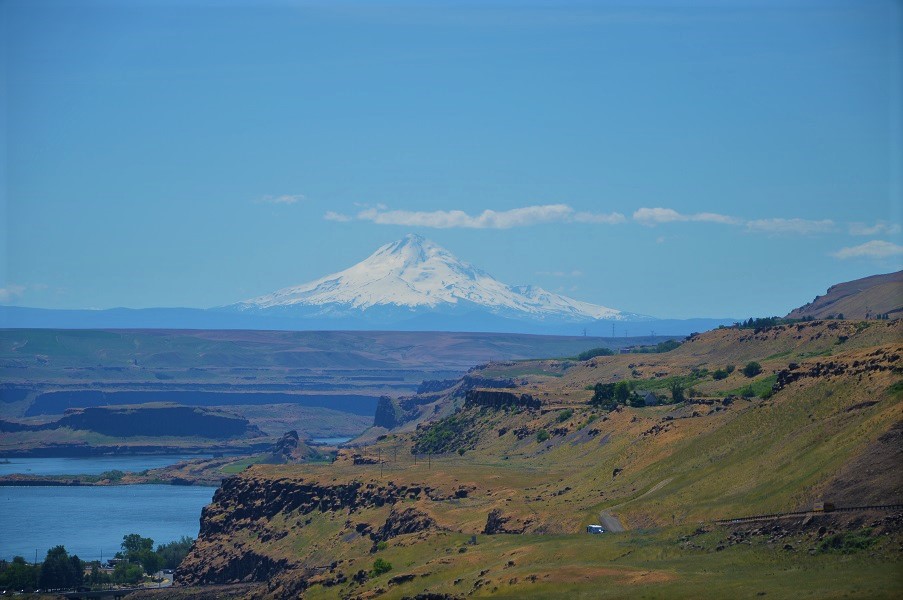 Mt. Hood in the background

Mt. Hood, an active volcano, overlooks the city, which is less than a hundred miles from the seacoast. A fault line runs through the town, but we havenâ€™t had â€śthe big oneâ€ť yet!

Iâ€™ve always known there is a Lowell St and a Lowell Lane in Portland, but I never stopped to take a picture until just now. There is probably no relation at all to our Publisher, Dan Lowell, but the coincidence is fun just the same and not everyone has streets named after them! 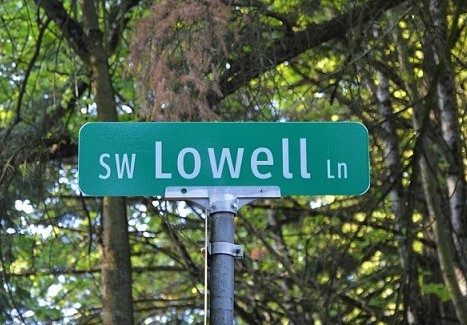 Now as you can see, this is really a STATESIDE STORY and all photos were surreptitiously taken by me!

By the way, there is a famous town on the East Coast named Lowell, Massachusetts that has a history all its own! It was known as an industrial mill town, and they say the crime rate is very low. It was named after Francis Cabot Lowell, a local figure in the Industrial Revolution and was founded in 1826. It is located along the rapids of the Merrimack River, 25 miles northwest of Boston, and the confluence of the Concord River. The Lowell Film Festival was in April and the Lowell Folk Festival is in July. And if you wait around until October you can join in the Jack Kerouac festivities which celebrate this writerâ€™s ties to the city. 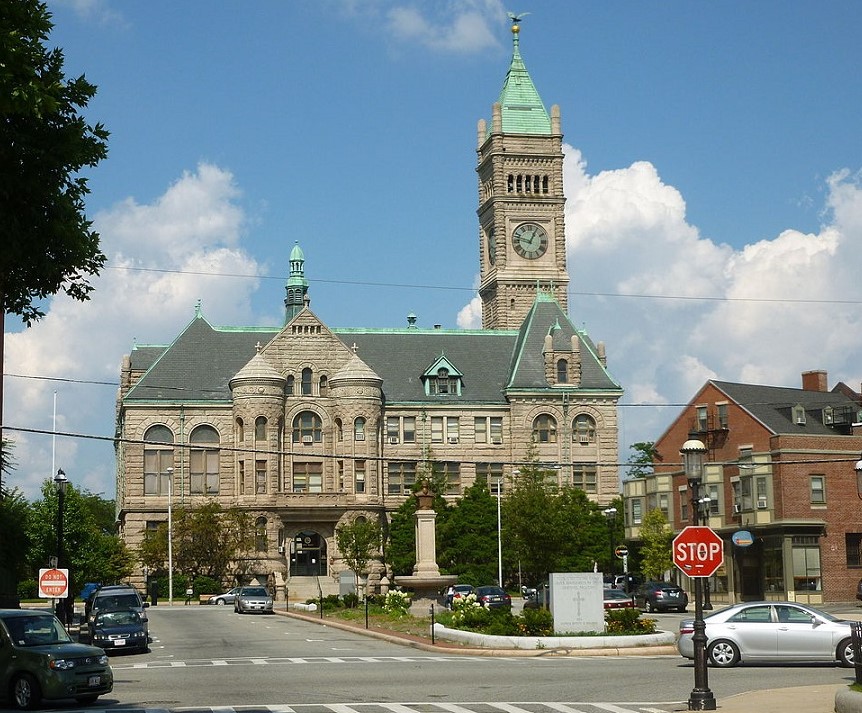 In fact, Lowell, Massachusetts has a variety of Festivals that run the gamut of Womenâ€™s Week in March with Irish Culture Week also on the calendar, historic buildings in May, African Festival in June, Lowell Southeast Asian Water Festival in August, the Lowell Kinetic Sculpture Race in September, the October Bay State marathon and half-marathon, and in February they have Winterfest which is a celebration of winter and Lowellâ€™s birthday! 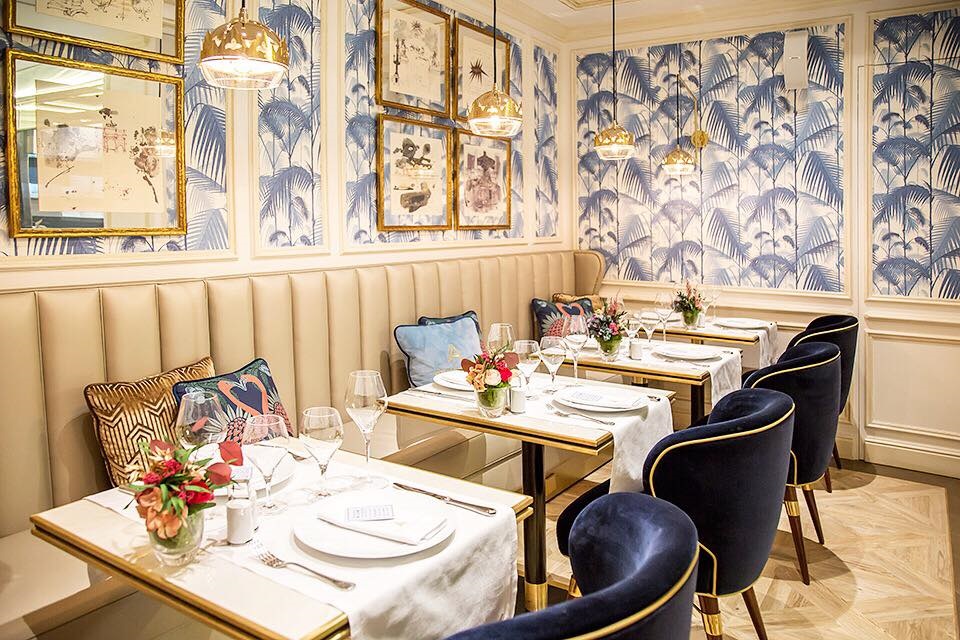 The GUIDEPOST was founded on 28 February 1958. It has been published continuously from there on, first as a printed magazine. It is now completely online, in keeping with the times. For which fact the GUIDEPOST is Spainâ€™s oldest existing publication in the English language, The Dean of English-language Publications in Spain. GUIDEPOSTâ€™s Publisher and Editor in Chief are Daniel H. Lowell and Rose M. Maramba respectively. To learn more, please go to the â€śAboutâ€ť page. Thank you.

Texts, prints, photos and other illustrative materials depicted in GUIDEPOST have been either contributed by the authors of each published work or, to the Magazineâ€™s good-faith knowledge, are in the public domain or otherwise benefit from the allowances of Articles 9(2), 10, 10(bis), and applicable others of the Berne Convention for the Protection of literary and artistic works.