SPANISH RACISM FOCUSES ON THE GYPSIES & THE VASCOS

(Opinions expressed in this column are not necessarily those of Guidepost.
Readers are invited to send in their comments).

In 1978, there were over 158,000 “extranjeros”  residing in Spain representing 61 of the world’s nations from 5 continents. Spain never has had a “racial” problem in the sense that the U.S. has with its blacks and “chicanos;” or the British with their minorities from Africa, Pakistan and India. In fact, Spaniards are most fond of saying that they harbor no racial prejudice whatsoever.

What the Spaniards say is true in one sense. Certainly, no one from the foreign community seems to be complaining about racial discrimination — personal or institutional. If they do, it never appears as such in the mass media. But, 158,000 is a drop in the bucket of a population of 37 million.

In another sense what the Spaniards say is not the whole truth in at least two significant cases. The first involves the Basques; the second the gypsies.

No “Spaniard” will ever raise a racial issue in discussing the Basques. On the contrary, almost every Basque — some 2 million of them — will agree with the oft and publicly repeated proposition of Herri Batasuna — “No somos españoles!” 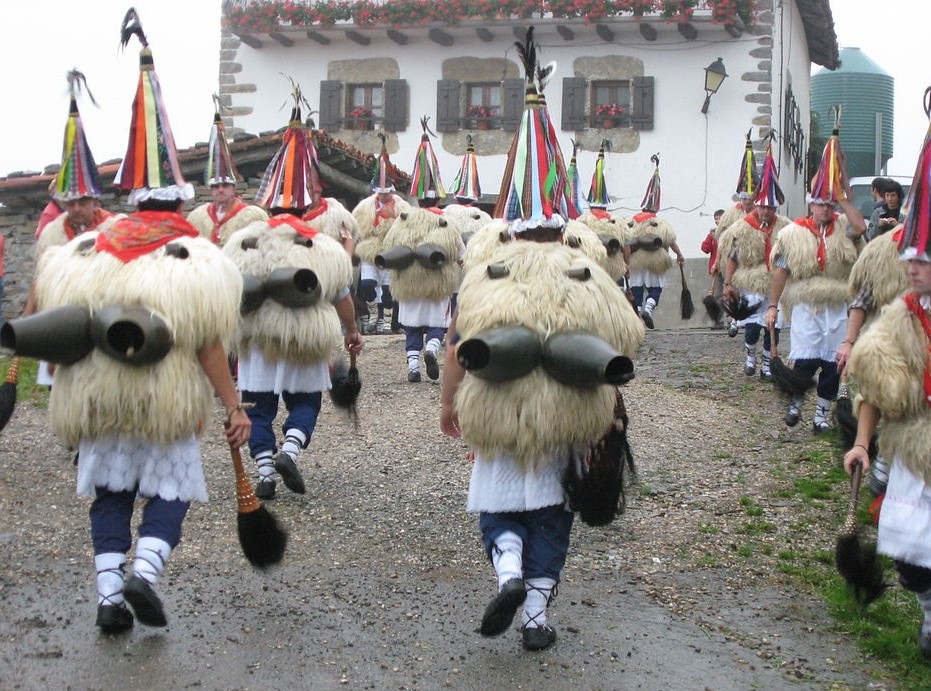 Basques: “We are not Spaniards.” (Photo: Zanpantzarrak — they who carry giant cowbells to wake up Nature and spook evil spirits — in their traditional costume during the carnival in Iteuren, Navarre at the end of winter)

A Basque does not have to agree with the ETA apologist tactics of Herri Batasuna to utter the phrase. They firmly believe it in spite of ETA — “No somos españoles!”

The interesting Guidepost article by Kathleen Wheaton about the youth of Euskadi (5 June, 1981) contained the statement of one young Basque: “We really are a different race. . . “ That is not much different from what a 70 year old “moderate” Basque one told me —  “It’s not that we are any better or worse than the Spaniards, we are just different.” Note the similarity to the statement made a year ago by Xavier Arzallus, a former Jesuit and the leader of the PNV — the governing party of the Basque autonomous region. “It is not a question of being a superior or inferior race but that which is extremely distinguishing (between them).”

There is only one conclusion to draw from this kind of statement. Whoever makes it does not know the history of the Basques on the Iberian Peninsula, desires to forget it or wants to alter the history books. The Basques have been on this Peninsula so long they do not even know where they came from or how their language originated. Their origins go back beyond recorded history. The greatest Basque thinkers of the twentieth century from Miguel de Unamuno to Julio Caro Baroja (an ethnologist) can not give a satisfactory answer to three apparently simple questions: What is a Basque? What is it to feel oneself as Basque? And, What is the Basque country? 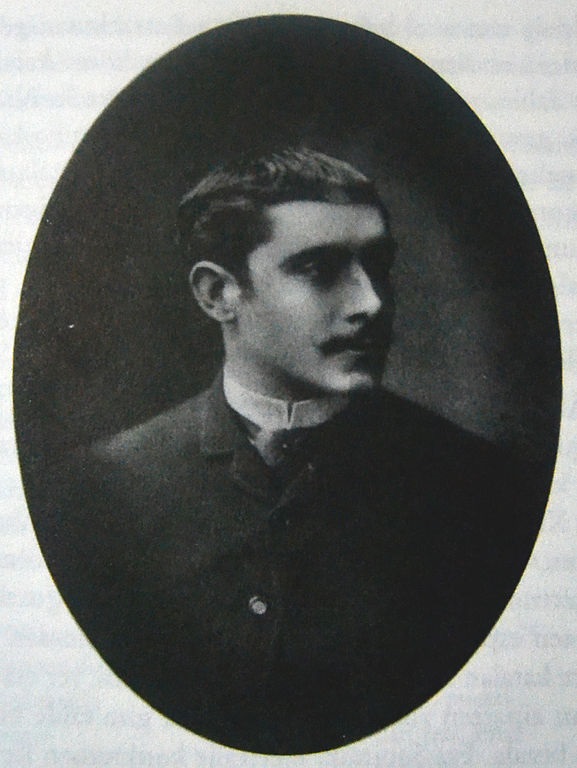 Sabino Arana Goiri in the 1880s: One can not understand Basque racism without being familiar with his pernicious doctrine

Sabino Arana was born in Bilbao, “of a family of fanatic Carlists” according to historian Salvador de Madariaga. Sabino wrote his most significant ideological work in 1897-“El partido carlista y los fueros baskonavarros.” This work provided the ideological basis of the PNV which Sabino established in 1903.

I have tried both in Madrid and the Basque country to obtain books written by Sabino in the book store. They were impossible to buy because there were none available. I was told by the owner of the Basque book publishing firm that Sabino’s works were not available in Spain (presumably that also meant the Basque country). They were published in Argentina.

In any event, to learn more about Sabino, I had to be satisfied with books written about him by his followers. One of these was a book by ORTZI-a pen name for Herri Batasuna congressman, Francisco Letamendia. The title: “Historia to Euskadi: el nacionalismo vasco y ETA.”

Ortzi wrote: “Of the components of (Basque) nationalism which include race, language, character and customs and historic personality, for Sabino the decisive one was race.” He continues: “The racism of Sabino is an ingredient that did not exist in the foral tradition, and it constitutes without any doubt, the most repulsive and disagreeable aspect of his doctrine. “ At least, Ortzi is honest!

There are other relevant quotes from Sabino.

“Race is the essential element of the nation;  without the Basque race, there would be no Basque country.”

“The Iberian theory . . . according to which the Basques are the most ancient people to populate Spain is rejected.” 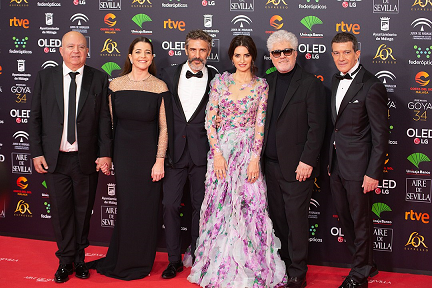 “Unlike the Spanish race which is a mixture of races, the Basque race is original.” (Photo: the team of the Spanish movie “Dolor y Gloria” which includes Spanish film director Pedro Almodovar and Spanish actors Penelope Cruz and Antonio Banderas at the Premios Goya 2020)

“The Basque race, original and unclassifiable among the races of the world, is not a mixture like the Spanish race . . . “

“A Basque is one who possesses a Basque surname.”

“The principal enemy of the Basque race is the “ Maketa” invasion.” (Maketa is part of Sabino’s inventive language and means Spanish.)

“This invasion corrupted the venerable traditions and customs of the country . . . If the Basque country was independent, this invasion would not be harmful. The Spaniards would be received as foreigners. Their numbers would be limited. Interracial marriages would be prohibited . . .”

“The Basque language . . . is the most ancient and perfect of known languages. But its importance remains subordinated to race . . . The defensive value of the language is an instrument to preserve the Basque country from the Spanish invasion . . . for us it would be ruinous if the Spaniards who reside in our territory speak Euskera.” 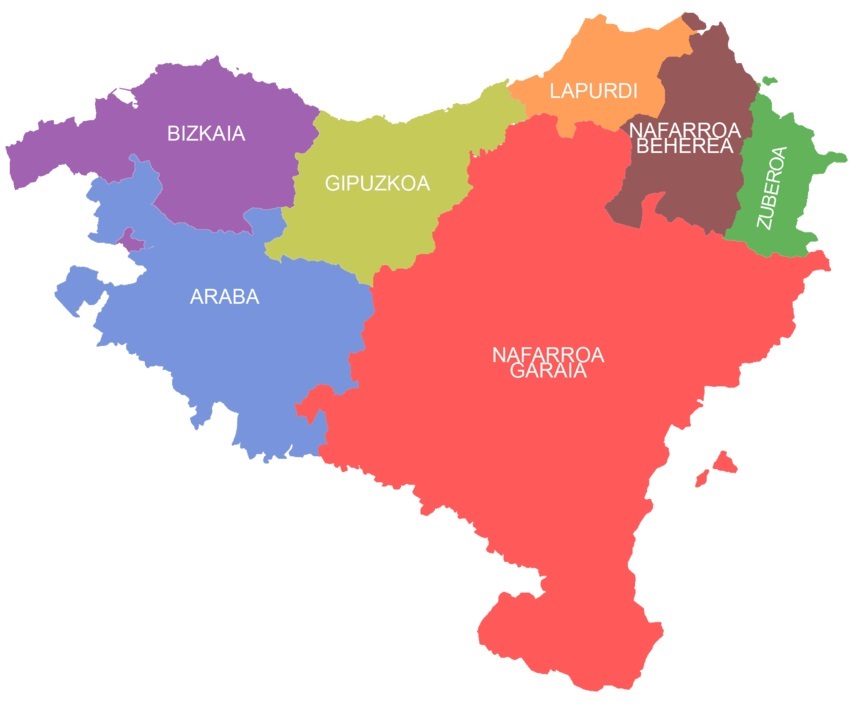 The greater cultural region of the Basque Country is made up of seven historic provinces, three of which are in the Pyrénées-Atlantiques department of France: Labourd (Lapurdi), Lower Navarre (Nafarroa Beherea) and Soule (Zuberoa). Navarre (Nafarroa Garraia) rejected a joint statute of autonomy with  Gipuzkoa, Álava (Araba) and Biscay (Bizkaia) in 1932. Navarre was granted a separate statute in 1982. Today, the Basque Country in Spain consists of Gipuzkoa, Biscay and Álava.

Sabino hated — and that is the only word one can use — the “Spaniards.” He once wrote: “Spain is the most degenerated and wretched nation of Europe; its race the most vile and despicable.”

On every occasion available, Sabino insulted the “Spaniards.” In 1895, he wrote the physiognomy of the Vizcaino as intelligent and noble, that of the Spaniard inexpressive and harsh. El Vizcaino degenerates his character when he rubs shoulders with the foreign (Spanish) element. The Spaniards need a foreign invasion from time to time to civilize the country.”

The Basque-Spanish problem? The root of that problem comes from the seed planted by Sabino Arana. His contemporary followers infected their children with the disease. The subsequent generation in turn, their children. By the time the Spanish Civil War was over (the Basques were losers) coupled with 36 years of Franco’s cultural repression every Basque family had been thoroughly indoctrinated in Basque racism and hatred of the “Spaniards.”

For some reason, Basque bitterness towards the “Spaniards” has not been reciprocated. Until ETA went “haywire,” the Spaniard would talk about the Basque with “cariño” and respect. Many still do but with a heavy heart. Others are bitter over ETA’s tactics and the support many Basque provide to them.

Julio Caro Baroja was asked about the Spanish-Basque problem. He said the “Spaniards” are not familiar with the Basque people. He went on “but the problem is general. Our peoples do not know one another because for the last two or three centuries, the central government did not want our peoples to understand one another.” 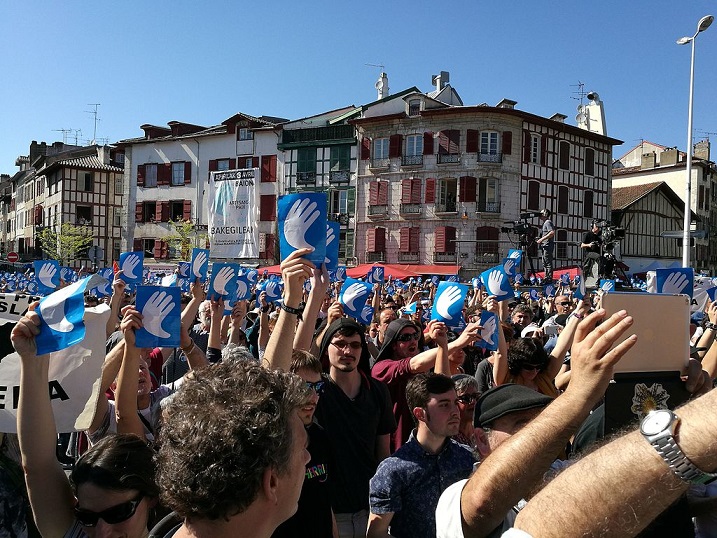 April 2017 pro-peace rally in the southern French city of Bayonne on the disarmament day of ETA. The Basque nationalist and separatist group, ETA, is considered by the European Union as a terrorist organization. It had killed more than 800 people between 1968 and 2010, the year before its announcement of  a permanent ceasefire

Franco is now dead. The country has a constitution of consensus which the Basque refused to ratify. Free elections have been held. The Basque have their long-cherished autonomy. Yet, ETA is still doing its vicious mission with the support of a decreasing but still important part of the Basque population. And the president of the Basque National Party (PNV) — Arzallus — is asked this question in April 1980:

After more than eight decades, how does the PNV value the doctrine of Sabino? (Of course, Sabino philosophized about more than race.)

The answer: “I completely assume the fundamental viewpoints of Sabino Arana which are the affirmation of the existence of a people.”

The Spanish-Basque problem with its roots in Basque racism and mistrust will be around for generations to come. Unfortunately, the average Spaniard knows next to nothing about Sabino Arana and his pernicious doctrines. Therefore, they will never understand why the Basques continue to state: “no somos españoles!”. 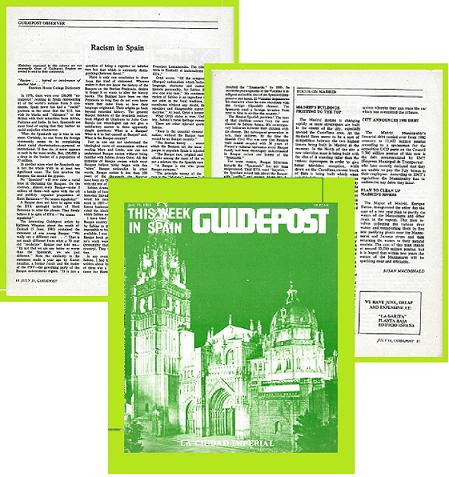 Next article THE AMERICAN CLUB OF MADRID NEWSLETTER SEPTEMBER 2021 »