SPAIN TODAY: the Economics of the Local Elections, Spanish Football, the Vacation-Loving Spaniards and the Internet

The usual peddlers of gloom and doom had a field day in pre-electoral Spain, foretelling political and economic meltdown if the radical left that revolves around the centripetal Podemos “movement” made a significant headway in the elections in the more than 8,100 Spanish cities and  town and 13 of the country’s 17 regional communities last 24 May. Investors would be spooked and take their money away in massive retreat, there would be political chaos, and the incipient economic recovery would fizzle out. So went the dire predictions.

Indeed, the morning after, the Ibex 35, Spain’s benchmark stock market index, fell by 2%. Was this apocalyptic or what? The drop was half the result of the elections whereby the two mainstream political parties that have been governing Spain alternately during the past two decades won a total of only 52% of the nationwide vote, down from 65% of just four years ago when the conservative Partido Popular (PP) won a sweeping victory that stunned its traditional rival, the Social Democratic party (PSOE).

The two-party system that has brought political stability to democratic Spain is now mired in a new political situation wherein two upstart parties, the Podemos movement and the Ciudadanos, hold the key to the formation of viable local governments. But so far that doesn’t seem to lead anywhere near to triggering the meltdown that the doom-and-gloomers had been predicting.

The scenario that would have really panicked local and foreign investors was where Podemos and Ciudadanos gave PP and PSOE a run for their money. As it is, the “impressive” showing of Podemos (in the capital city of Madrid, the Ahora Madrid/Podemos mayoral candidate is only one local assembly seat behind PP’s, with the Socialist candidate lagging behind, a poor third) would actually be just 10% of the total vote if the local elections had been national instead, according to Leon Cornelissen, Chief Economist at the global asset management firm Robeco. This, according to Cornelissen, means that the two mainstream parties remain dominant. 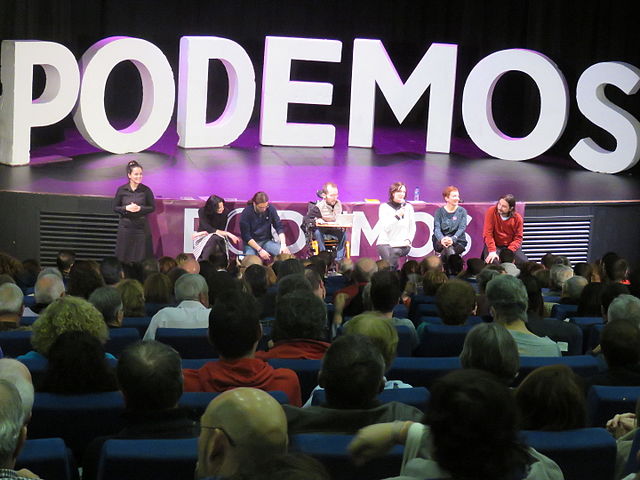 Podemos rally: gearing up for the upcoming general elections in December after the great showing at the municipal elections this May

Economic and political turbulence of catastrophic proportions doesn’t therefore seem to be on the cards.

Antonio Barroso, senior analyst of the London-based consulting firm Teneo, says that the recently held local elections “confirm the fragmentation of the Spanish party system, with new parties having a lot of appeal . . . but the main parties will survive and stay as the main players.” Spain’s rapidly improving economy, among the fastest-growing in the EU, will be conservative Prime Minister Mariano Rajoy’s ticket to re-election late this year, so Barroso predicts.

Ciudadanos, the other upstart party, is centrist and business-friendly. This provides a foil to Podemos’ radicalism.

When on Monday, 25 May, the Ibex 35 shed 2% of its value, it was also due to fresh worries about Greece.  The day before, while Spain was electing its mayors and regional presidents, Greek Interior Minister Nikos Voutsis announced that his country would have to default on the €1.5 billion due to the IMF between June 5 and 19 because “[the money] does not exist.”

Some quarters worry that Podemos might lead Spain to a Greek-like situation, claiming that there are many similarities between it and Syriza now ruling Greece. In the newly fragmented political system in Spain, Podemos could take advantage of the negotiations for a coalition central government and appoint itself the kingmaker in the aftermath of the November 2015 general elections.

On Tuesday, two days after the local elections, investors didn’t seem to be overly worried about such a possibility. The Ibex 35 lost 0.72% but analysts charge it to the continuing anxiety over the Greek default and not to the local political situation in Spain. In fact among the major stock markets in Europe, the Ibex lost the least. France’s CAC 40 dropped 0.91%, the FTSE 100 in London 1.38% and the Frankfurt Stock Exchange 1.88%.

On 25 June 2013, Florentino Perez, President of Real Madrid, the world’s richest football club in terms of income, signed on Carlo Ancelotti as coach, replacing Jose Mourinho. The deal was for three years.

In so doing, Ancelotti became the only  manager after Liverpool’s Bob Paisley to win the Champions League three times, as a footballer and as a manager.

The Champions League “Decima” trophy won by Real Madrid in 2014

On his second year with Real Madrid, Los Blancos won another European trophy (12 August 2014), the UEFA Super Cup. In the last 4 months of 2014, Ancelotti’s Real Madrid set a record in Spain of 22 consecutive match victories in all competitions that began on September 16. The brilliant period culminated in Real’s first FIFA CLUB  World Cup title (December 2014).

Because of his track record before and during his stint at Real Madrid, Ancelotti was one of the three finalists for the 2014 FIFA World Coach of the Year Award. Then on 19 January 2015, he was inducted into the Italian Football Hall of Fame. Right next day, he won the International Federation of Football History & Statistics’ 2014 Award  for The World’s Best Club Coach.

So why did Florentino Perez reach “a very difficult decision” on 25 May 2015 and sacked Ancelotti? Perez said that the Italian manager would always have a place in the club’s history; he was, after all, the coach who gave Real Madrid its Décima (the historic tenth European Cup trophy). “However at this club the demands are huge and we need a new impulse in order to win trophies and be at our best,” Perez said.

And that put paid to Ancelotti’s managership at Real Madrid. He didn’t even finish his contract; Perez rescinded it.

The majority of the Real Madrid players made their support for Ancelotti known privately or publicly, particularly in the social media. Football Superstar Cristiano Ronaldo, the Portuguese forward on the team, said he hoped to work with him next season.

At the writing of this report Spanish coach Rafa Benitez is being rumored to succeed Ancelotti.

Images
>Carlo Ancelotti by Doha Stadium Plus Qatar (www.dohastadiumplusqatar.com) via Flickr, CC BY 2.0
>The Decima trophy by David Flores (https://www.flickr.com/people/36461049@N00), CC BY 2.0

Spaniards are unbeatable when it comes to holidaying. Spain’s National Authority on Competition and Markets Authority’s latest report shows that during the third quarter of 2014 Don Quixote’s countrymen spent €4.1 billion on travel services, airline tickets, land transport and other vacation-related stuff. This represents a 24.7% increase on the same quarter in 2013.

The EU is Spain’s biggest buy and sell travel market. Nearly 90% of the country’s outbound sales have been made within the Union. The United States is second biggest.

An incredible 34.2% of all online sales in Spain have something to do with tour packages, hotel bookings and flights. The Spaniards, who seem to have been born for fun and fiestas, are turning increasingly to the internet for their vacation.