SECOND OF MAY: THE MADRILEÑOS, NAPOLEON BONAPARTE & GUERILLA WARFARE

Dos de Mayo (2nd of May) is a public holiday in the Autonomous Community of Madrid with heaps of patriotic connotations. It commemorates the heroic rebellion of the Madrileños on that day and the next, in 1808, against the occupation of their city by Napoleon Bonaparte’s troops and the repression by the French Imperial forces. It’s been 210 years!

On 2 May 1808, in front of the Royal Palace on Calle Bailen, the Madrileños rose up against the unwelcome presence of French troops who they believed was undermining the Spanish monarchy whose Royal Family had had to quit the palace and head to Bayonne, France at the “invitation” of Napolen. Whereupon, Marshal Joachim Murat, Napoleon Bonaparte’s brother-in-law, sent a battalion of grenadiers from the Imperial Guard to the palace along with artillery detachments. The latter opened fire on the Madrileños who by then were ready to fight to the death. 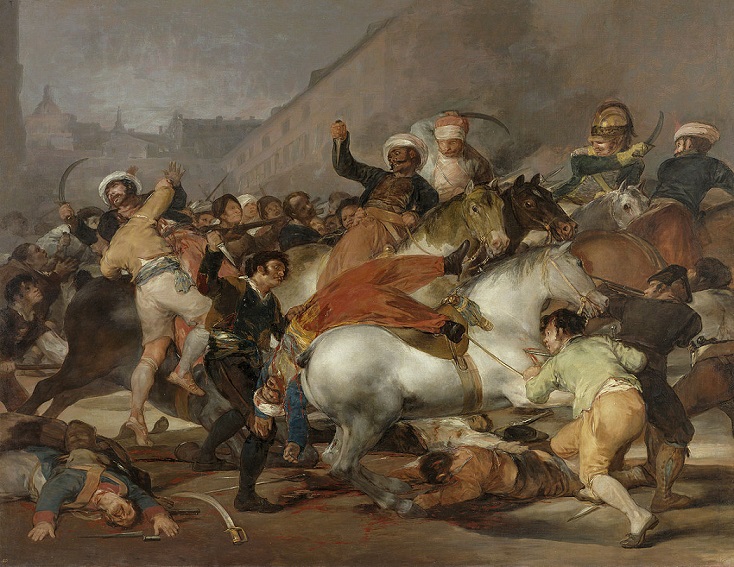 The rebellion spread to other parts of the city. Heavy street fighting broke out around the Puerta del Sol and the Puerta de Toledo. Hundreds of Madrileños died in the fighting.

This was a people’s war against a foreign enemy. The precursor of the guerilla warfare that would be waged till the French were driven from Spain. There were Spanish troops stationed in the city but General Francisco Javier Negrete told his men to stick to the barracks. The only ones to defy him and join the rebels on that 2nd day in May were from the artillery units at the barracks of Monteleón where the Plaza Dos de Mayo in Malasaña now is: Capts. Luis Daoíz and Pedro Velarde, and Lieuts.  Jacinto Ruiz  and Rafael Arango.

“Defense of the Monteleon Artillery Barracks” by Spanish painter Joaquin Sorolla. In the center, Pedro Velarde falls dead. To his left, Luis Daoiz desperately ordering his men to move to a new position

The French, vastly superior in numbers, assaulted the barracks during which Daoíz and Velarde died.

Murat, who had quickly moved most of his troops into the city, imposed martial law. Thus began the dismantling of the Spanish administration and the imposition of (shaky) French rule.

Brutal repression followed the crushing of the insurgency. In the evening of 2 May Murat issued a chilling statement: “The population of Madrid, led astray, has given itself to revolt and murder. French blood has flowed. It demands vengeance. All those arrested in the uprising, arms in hand, will be shot.”

Hundreds of prisoners were executed. All public meetings were banned, weapons surrendered to the authorities.

On that very day, in the nearby town of Móstoles, the news of the repression prompted Juan Pérez Villamil, secretary of the Spanish Admiralty and prosecutor of the Supreme War Council, to encourage the mayors of the town to sign a “Bando de los alcaldes de Móstoles”, which called for all Spaniards to rise against the invaders. It is a “Declaration of Independence”. 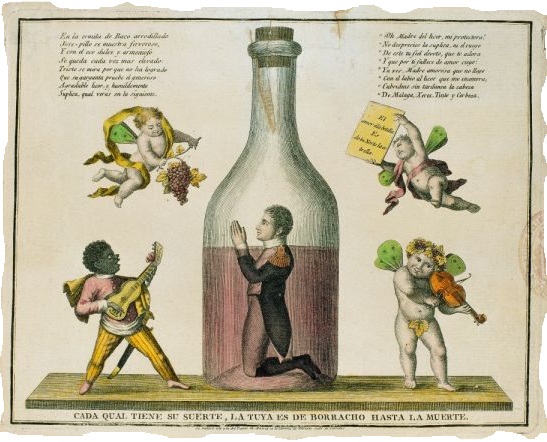 Caricature of José I during his reign. Inline text reads: “Each of us has his own destiny, yours is to be drunk till death” in allusion to his alleged alcoholism

The uprising in Madrid, and the subsequent proclamation of Napoleon’s brother Giuseppe as King of Spain (6 June 1808 – 11 December 1813), triggered resistance to French rule across the country.  The French thought their rapid suppression of the uprising would cow the populace. Wrong! Insurgency didn’t stop until they’d booted the interlopers.

The Franco-Spanish Treaty of Valençay was signed on 11 December 1813. It provided for the restoration of Fernando VII of Spain, imprisoned at Valençay, Central France since 1808, to the Spanish throne that Giuseppe Bonaparte usurped. It was preliminary to a full peace treaty between the antagonists.

Unbelievably, the “guerrilla” warfare carried out by irregular Spanish forces, as opposed to the regular forces, enriched the military vocabulary and served as a model for future insurgencies. Spain’s War of Independence was a detonator for the independence revolutions of the Spanish colonies in Latin America! 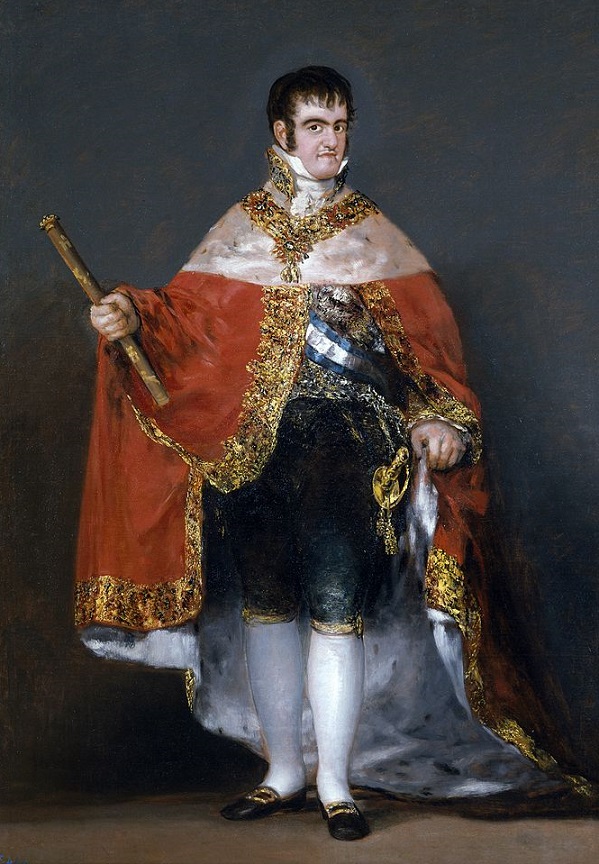 The restored Ferdinand VII in 1815

Once Fernando was restored to the throne in 1814, he repudiated the Treaty of Valençay, dismissed the liberal Cortes Generales, forcing the “regent” National Assembly to retreat to the southern city of Cadiz, and ruled as an absolute monarch.

Well, at least Spain was finally rid of Napoleon’s army. Napoleon himself was heading straight for his Waterloo anyhow (18 June 1815).

What were the French doing in Madrid (and in other strategic points in Spain) in 1808 in the first place?  Napoleon, on the pretext of reinforcing his army in Portugal, sent his forces and occupied Madrid from 23 March, with a view to seizing the Spanish throne on which to install Giuseppe. He actually achieved the goal. Giuseppe Buonaparte, turned José I, was King of Spain from 1808. But Napoleon didn’t count on the Spanish guerilla proving intractable, obliging him to keep a large army on Spanish soil. When His Harried Imperial Majesty removed some of his men for the campaign in Russia, the clock began to tick rapidly toward his downfall in Spain.

And to think it all started with just a handful of Madrileños!
Culled from Wikipedia and other sources

Next article PASSION OF SUCCESS IN A WORLD OF WONDERS: AN INTERVIEW WITH GIANNI BAUCE, Part 2 »