SAETA RUBIA WILL LIVE ON 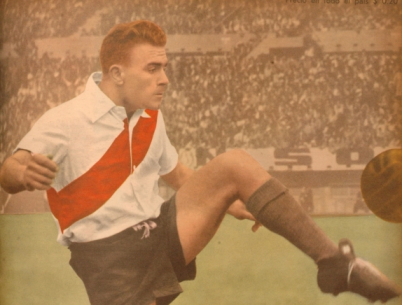 The whole football community has recently come together to mourn the passing of Real Madrid Club de Fútbol legend Alfredo Di Stefano. The unforgettable player passed away on the 7th of July at age 88 following a heart attack on Saturday the 5th.

During his footballing career the golden Argentine was best known as the Saeta Rubia (Blond Arrow).  He joined Real Madrid in 1953 from Millonarios and played an instrumental role in the team’s transformation into the football club of giants that it is today, initiating its rise to prominence as one of the world’s greatest teams. The prolific footballer scored in 5 successive European Cup finals for Real Madrid between 1956 and 1960,  won 8 Spanish league titles, 1 Intercontinental Cup and 1 Spanish Cup.

Di Stefano scores a goal for Real Madrid in 1959

Di Stafano had scored over 300 goals across 11 seasons before his departure in 1964 to Real Club Deportivo Español (Espanyol) when he was 38. His incredible feats are matchless, his European Cup exploits remaining a far off dream for footballers of today and his club records only surpassed by Raul (Raul Gonzqalez Blanco). His achievements earned him many awards including the Balon D’or. He was made honorary president of Real Madrid in 2000 and the club’s training ground is named in his honour.

Footballers from around the world have taken to social media to express their condolences and sorrow at this huge loss and pay tribute to him, with Real Madrid forward Cristiano Ronaldo saying that it was a very sad day for all, and that Di Stefano’s memory will forever be in all hearts. Former Madrid star Beckham too lamented his passing, and stated it was a privilege to have known him, calling him a true gentleman. Other famed football personalities, among them Pele and Diego Maradona who join Di Stefano in the league of legends, expressed their sadness at his death. One of the world’s greatest football managers, former Manchester United boss Sir Alex Ferguson, recalled Di Stefano as a balanced and poised player and one of the greatest of all time.

Without a doubt, this is an enormous loss to the football community but legends never die and his memory will live on. Rest in peace Don Stefano, the best in Spanish football history and one of the most influential footballers to date. By Anisah Hilali