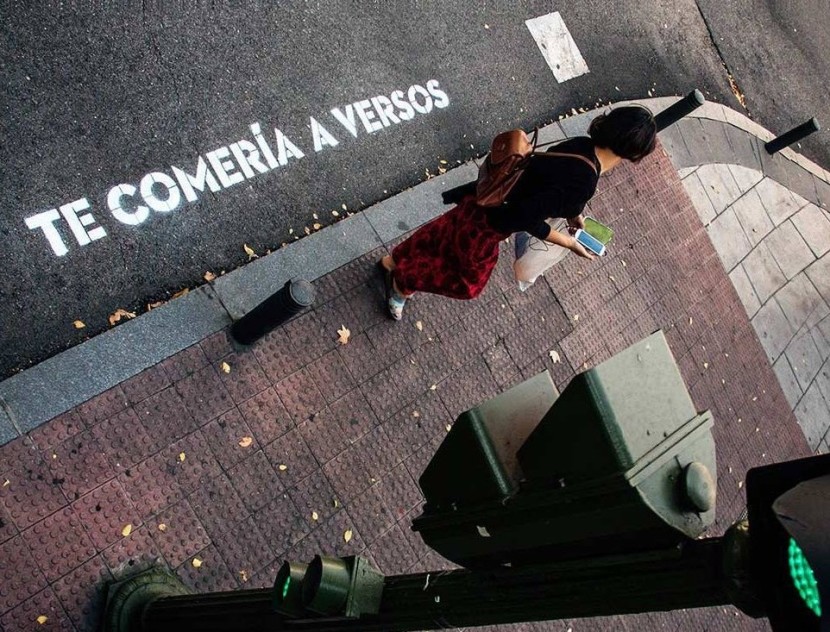 The Madrileños woke up one morning and found the pedestrian lanes in their beloved city sprayed with love verses! Many were thrilled.

A few days ago the Madrileños woke up to find that love verses had been sprayed on in quite a number of strategically located pedestrian lanes in their beloved city with mathematical precision. It was a hugely audacious “project” which could have easily courted the ire of the Madrid government, the police in hot pursuit of the culprits, but didn’t. Not this time anyway. In fact, it was given a benevolent, even slightly indulgent, coverage by the newscasts on the state-run Televisión Española.

Those involved in the project, which was called “MADRID, TE COMERÍA A VERSOS,” are alleged to have worked “in a sincere and altruistic manner to humanize our city a little.” Boamistura, a group of five internationally acclaimed “urban artists” who trace their roots to graffiti and was likely to have been behind the “project,” claims that “it is an act of love by artists and poets for our beloved Madrid.”

Most of the verses were taken from Spanish rap musician Rayden’s latest album “En Alma y Hueso” but not all. A few were from award-winning rock composer Leiva’s albums, “Diciembre” and “Polvora.”

While the majority of those who were asked by the media to comment liked the versified pedestrian lanes (“It’s surprising, unique, great fun, art, poetry,” etc.), dissenting voices would not stay mute: “It’s vandalism; they’ve got to be fined.”

Fuimos a hacer el amor. Parece que volvimos de la guerra. (We went and made love but it seems we returned from war.) On Mejía Lequerico St. cor. Carranza

Lo mejor no ha pasado ni está por venir. Está pasando. (The best has not happened already nor is it yet to come. It is happening.) On Farmacia St. cor. Fuencarral

Mi alma la tripula el viento de tu respiración. (The crew that mans my soul is the wind on your breath.) Toledo St.

No hay mejores brindis que los que hacen tus pestañas (There are no better toasts than what your eyelashes make.) San Bernardo St.

No hay mejor skyline que verte tumbada. (There is no better skyline than me seeing you lying down on your back.) Santa Cruz de Marcenado St. cor. Conde Duque

Que la linea que más cuides sea la de tu sonrisa. (May the curve of your smile be the line you take the greatest care of.) On Mejía-Lequerica Street cor. Travesía Florida

Te comería a versos. (With a b instead of a v, and without the r,  in “versos” the verse would revert to the popular line from Levia’s music, “te comería a besos” — ie. “I would cover you with kisses.” As it is, it has become “I’ll cover you with verses.”) Santa Cruz Marcenado St. cor. San Bernardo

Previous article « TWO INVITATIONS FROM THE AMERICAN CLUB THIS NOVEMBER

Next article THE SOCIAL SCENE 50 YEARS AGO IN GUIDEPOST »