EDITOR’S BLOG: PUT THAT IN YOUR PIPE AND SMOKE IT

Summer at GUIDEPOST is just a memory now.  It had been a “benevolent” summer, generous with golden sunshine and while it was inevitably hot it actually spared us the thermometer-busting temperatures typical of Madrid in July and August. It even lingered, weather-wise, through the first half of September, giving the city a bonus of extended warm sunny days.

Not at GUIDEPOST, though, where summer ended when our summer staff packed their bags and returned home to their countries. Rosa was first to go, then Anisah, Toni, Gloria, and finally Begüm and Melis. Before the parting could turn into some kind of an emotional upheaval we decided to celebrate it. Which is actually typical of GUIDEPOST. GUIDEPOST and parties, big-crowd or intimate, on any pretext, are an inseparable pair.

It’s impossible to be a stranger to kebabs when they’re everywhere. But it’s precisely because of this omnipresence that you couldn’t help suspecting they’re mostly just a slapdash imitation of the real thing and give them a wide berth. For our little party, our discerning Turkish guides Begüm and Melis led us to a kebab joint of their choice in the old part of Madrid. The high point of the party was at the end when we learned – quickly too! – how to draw cool menthe-flavored tobacco from the hookah pipe, known as narghile in Turkey.

As we neophytes smoked the narghile a feeling crept on us that  we were in on a soothing and pleasurable social act of sharing. The soft gurgling of the waterpipe created an ambience that induced a sense of togetherness so antithetical to egocentric-individualistic cigarette smoking. It is said that what really counts when you smoke the pipe is not what is in it but the company. Naturally, Begüm and Melis knew this already. Why, the narghile has been popular in Turkey since the 17th century! Turkish tradition has it that when your (Turkish) host offered you the pipe it was not only out of hospitality but was an act of trust as well. 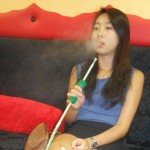 She turned pro on the first try! 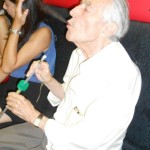 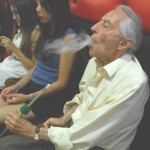 For a time the popularity of the narghile waned but lately its hypnotic appeal is coming back. In the West, where it is spreading but where tobacco-smoking in public establishments is banned, they’re substituting tobacco with herbal alternatives.

As for us, we just went ahead and smoked the tobacco in our pipe. We couldn’t have said a better goodbye to GUIDEPOST’s memorable and productive summer. 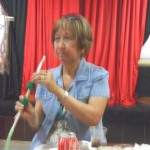 Let me see how I’ll handle this. 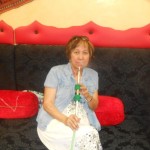 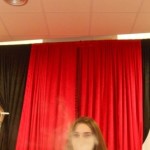 Yes, you can even use it as a smokescreen!

But wait a sec now, isn’t tobacco-smoking banned even in kebab joints in Spain? Have we unwittingly broken the law? Or have these places been granted a special dispensation? Should we say “Sorry” and pay the fine or whatever? As Woody Allen said, “If only God would give [us] a clear sign!”

Our new friends: they not only served us fine kebabs but saw to our narghile too 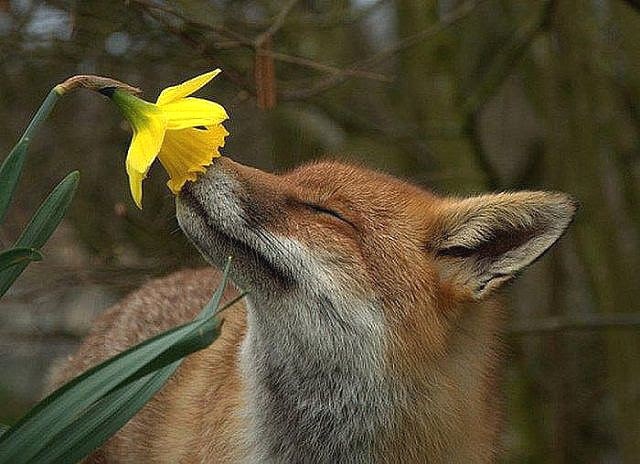 Next article PICTURES THAT CAN MAKE YOUR DAY! »