PHotoEspaña, the International Festival of Photography and Visual Arts, is the most popular yearly cultural event in Spain judging by the number of visitors who come to the PHE venues: some 700,000 annually. As such, and for the quality of its exhibitions, it is now one of the most relevant visual arts events in the world acclaimed by prestigious critics. 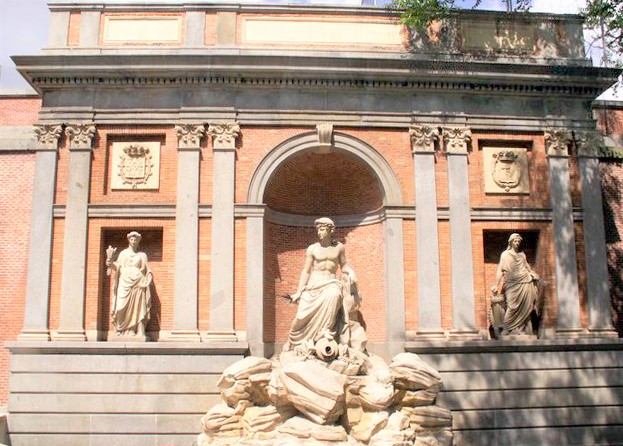 Magnum Photos, the third of our 3-part series on PhotoEspaña 2014, was created in 1947, following the Second World War. Formed by four diverse photographers — Robert Capa, Henri Cartier-Bresson, George Rodger and David “Chim” Seymour — Magnum Photos strives to shape what their audience sees and how they see it.

Over a hundred candid B&W photos

The building where the exhibition is being held is interestingly built. The inside contains spiraled staircases leading up to three floors. The staircase resembles those of De Repente, el Ultimo Vernao (Suddenly Last Summer) starring Elizabeth Taylor. Each floor has a different color carpet, progressively adding a darker tint of red.

Replica of a camera filter

A big replica of camera filters are attached to the railing of each floor. Each lens matches the colors on the floor. Through the three lenses, a bright light shines  on to the center of the exhibit that holds three acting chairs on a platform. The chairs are a great place to take pictures. The light that shines down has the names of all the actors and photographers displayed.

This exhibit displays 116 black-and-white candid photographs taken on the set of 14 well known films, including Limelight, Rebel Without a Cause, The Seven Year Itch, and The Important Thing: Love or Planet of the Apes. Among the actors and actresses in these are Marilyn Monroe, Charlie Chapmen, Denis Stock, Nicolas Ray and Eugene Smith.

Coming from the United States, this exhibition was a great remembrance of my roots. It is nice to see that other countries appreciate the films produced in my country. Magnum Photos stays true to its goal of expanding the audience’s field of vision vis-à-vis a subject matter. This is done by showing short clips of the films and candid pictures, thereby allowing the audience to witness  the actor’s on-set performance as compared to their actual personality. The photographs add a personal connection between the audience and the actors. It shows the audience that actors are just like them.

This exhibition shows reality behind the cinema screens. It shows that there are more than just one person responsible for the making of these films, for whose admirable capacity for innovation we should all be grateful because without them these great films that started it all could not have been produced.

Rosa Maria comes from an artistic family in New York,  attends the City Universtiy of New York Lehman College, on the Dean’s List with her double major in art and multimedia journalism, but is currently living in Spain. Says Rosa, “I love all forms of art but I take a special interest in photography which saves moments that the mind will one day forget.”

Previous article « WORLD CUP FINAL: There was no Maradona to Bag the Trophy for the Argentines

Next article STATESIDE STORIES: Americans Abroad and the Long Arm of the IRS »