OPEN HOUSE — FOR YOUR READING PLEASURE! 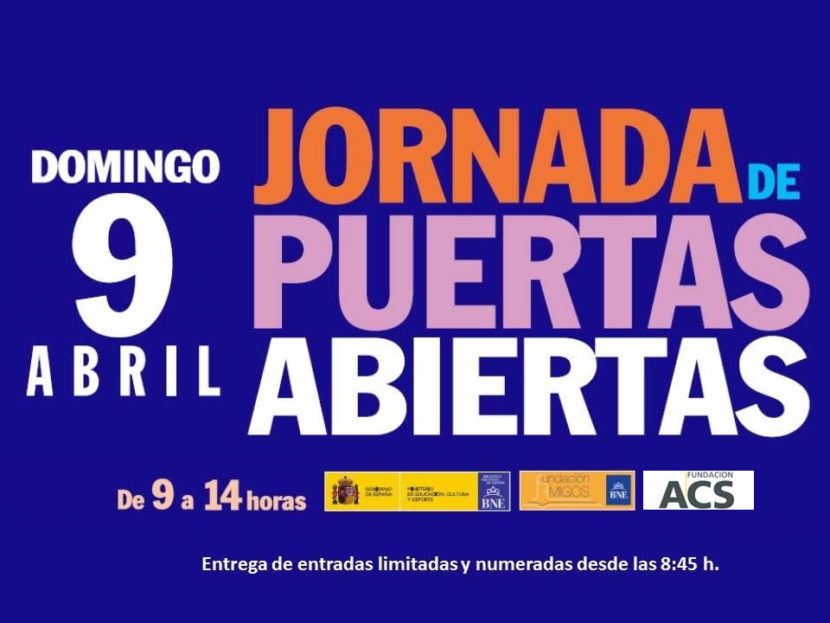 Go through the awesome portal of the Biblioteca Nacional and you’re catapulted
into the wonderful world of books and ancient manuscripts.
Special event: Open House, 9 April 2017

King Philip V founded the library in 1712 as the Royal Public Library (Biblioteca Pública de Palacio) and made it mandatory for printers  to submit a copy of every book printed in Spain.

The Royal Public Library, then, amassed a prodigious collection of books, priceless manuscripts, maps, prints, coins, medals, and archaeological objects. What for? To assemble a documentary history of Spain.

Continuity is the hallmark of the august Biblioteca. When it ceased to be a Crown property in 1836 and became a National Library under the Ministry of Governance, it was charged with collecting materials that documented the country’s history. Just like before.

The monarchs in the 18th century, their families, and retainers showed a special interest in the Library. They’d go visiting the institution. The result: continuous rapid growth of the Library. Just fifty years into its foundation and it already housed 60,000 books and other items, not least +5,000 manuscripts and codices.

Expansion would continue into the next century. And would not end there. Specialists at the library kept track of literary prizes and collected periodicals, pamphlets, and broadsides. By the middle of the 19th century, the Library had more than 200,000 volumes to its name and was undoubtedly the largest library in Spain.

It was in the 19th century that the Biblioteca Nacional acquired most of its antique and valuable books and manuscripts.

When in 1808 Napoleon invaded Spain he sent King Ferdinand VII packing. A year later Napoleon abolished all religious orders and the Royal Public Library became the repository of 58,012 volumes from monastery and convent libraries and archives. Many families also transferred their private collections to the Library.

A similar thing occured in the 20th century. During the Spanish Civil War (1936-1939) works of art and books (nearly half a million volumes) in religious convents, palaces and private houses were collected and stored in the Library for safekeeping against the ravages of the terrible carnage.

On 16 March 1836 the Library, which was newly converted to a National Library, was opened to the public for the first time. In the same building where it is housed today. At the time its enormous Reading  Room on the main floor could hold 320 readers!

Impressive: At the top of the Spanish Library System, the National Library is the State Repository of Spain’s Cultural Memory. It is, inevitably, an essential point of reference for research into Spanish culture.

As such, it sees to it that all of Spain’s bibliographic output on any media are made available to the Spanish Library System, to national and international researchers, and to cultural and educational institutions.

A partner in “Parallel Histories: Spain, the United States, and the American Frontier”, the National Library of Spain houses a substantial number of rare books, manuscripts, maps, prints, and other materials which relate to the Spain’s presence in the Americas.

Come to the Open House on Sunday!

Joann has been writing as long as she can remember and intends to go on writing forever.
Next to writing she loves to travel; she’s begun exploring the Far East after doing Europe over the years.
She did her Master’s at the Universidad Complutense de Madrid.

Next article THE PASSION & PAGEANTRY OF THE SEMANA SANTA IN SEVILLE »