ON BECOMING A SPANISH NATIONAL, Part 2: Experiencing the CCSE and DELE, An Opportunity of a Lifetime in Spain 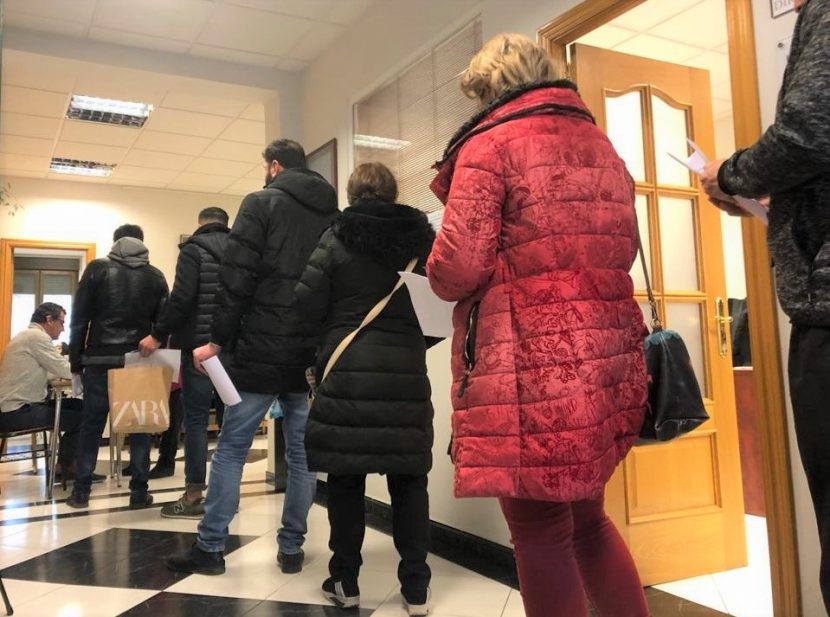 CCSE exam: lining up for the opportunity of a lifetime!

It was the last Thursday of January. A crowd gathered on Calle Arenal just outside the Eureka Language school. Future citizens of Spain lined the streets before taking the Conocimientos Constitucionales y Socioculturales de España exam (CCSE) that evening. 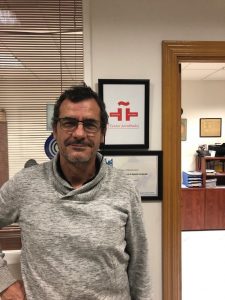 Chiqui: “The CCSE is an easy exam. The questions can be as simple as how many colors are on the Spanish flag. But they can also be complex.”

“We, at Eureka, only administer the CCSE because we’re not interested in the DELE for economic reasons,” said Jose Fernando – known as ‘Chiqui’– who jointly owns the language school with his brothers Juan and Angel. “If I offer the exam, and there are few candidates, then it’s my problem. It costs me a lot.”

The questions on the test are very basic, according to Chiqui. They can be as simple as how many colors are on the Spanish flag to more complex questions about politics and constitutional rights.

“The CCSE is an easy exam,” Chiqui says, “But many people taking it have a low cultural level. For some of them, studying for this exam is the very first time they’ve studied in their life, because they’ve never studied in their home country before. So, for some the test is difficult.” 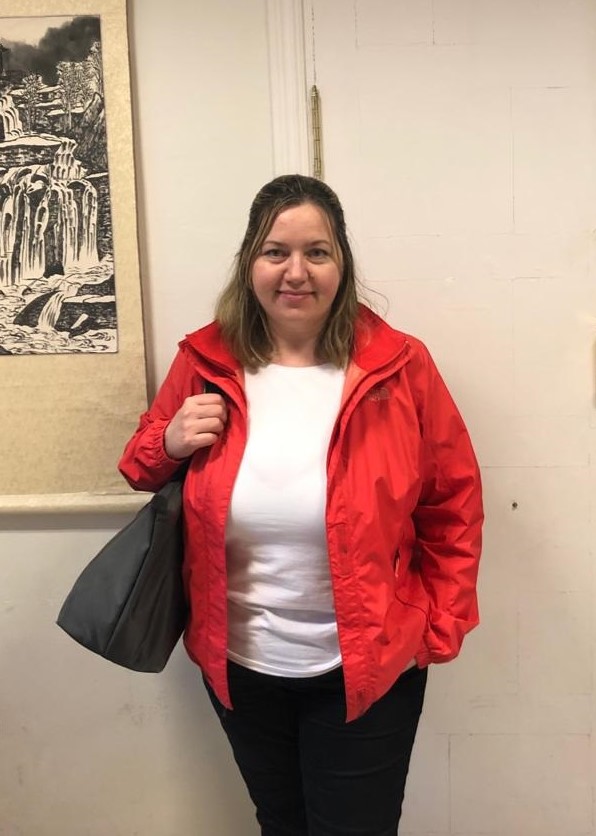 Mihaela: She finished the 45-minute CCSE exam in just over seven.

The test started at six that evening. In less than eight minutes, Mihaela was already heading for the exit. “For me it was easy,” the Romanian native said; she has lived in Spain since 1999­. “For others, the questions are not so easy.”

It was her first time taking the CCSE and she prepared with the  Instituto Cervantes website manual. Mihaela, a fan of Antonio Banderas, likes Spain for its warm climate, friendly people, and rich culture.

Nelza, on the other hand, a 44 year-old from Bolivia living in Spain since 2006, only has Thursday off each week from her job cleaning hostels. Thursday, January 29th was her third time taking the exam, and her nerves were flaring up as she waited to take the test. 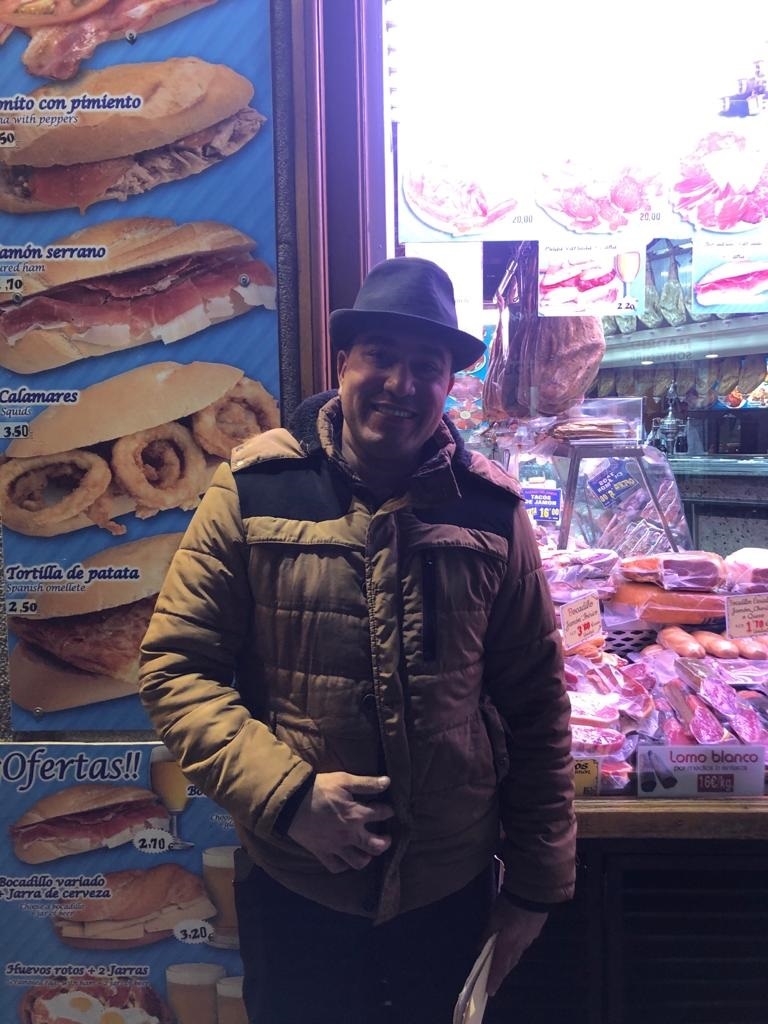 Jonny wants to open a restaurant of his own.

Jonny, a cook from the Dominican Republic, was also worried about the exam. He expressed how passing the CCSE will open up an entirely new world of opportunities for him. The citizenship will allow him to achieve his dream of opening his own restaurant. As Jonny was signing to allow Guidepost to use his photo, I told him he could use the autograph practice for the day he becomes a famous cook in Madrid. We laughed.

Some are confident, some nervous, and there are others who are ready to accept whatever fate has in store for them.

“It’s in the hands of my higher power,” Dan Tennant-Ralphs said, a 33-year-old salesman from Gloucester, England. “I printed out the manual,” as Dan explained his preparation methods, “because I’m a bit old school.” Signing up for the January test in October, he attended about five preparatory classes and used the Cervantes phone app.

“It cements my roots here,” Dan said, explaining his reason for applying for Spanish nationality. He added: “And I’m not going to lie, Brexit is also playing on my mind.”

Although Dan has no family here, he feels settled with the friends he’s made living in Spain for ten years. During that period, he lived in Madrid, Seville and Galicia. 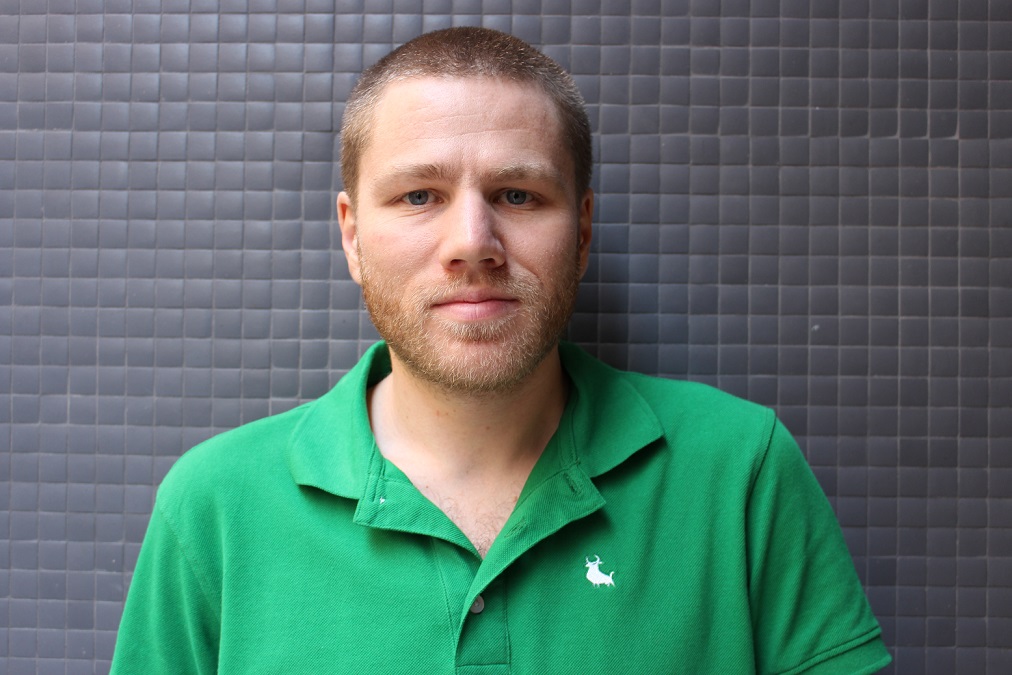 Dan: “Spain has a lot to offer. And I won’t lie, Brexit was on my mind when I did the nationality exam.”

“Spain has a lot to offer,” Dan points out, “between the weather, the food, the lifestyle, and laid back people, not to mention the varied gastronomy and landscape– and also the history.” Dan also took DELE A2 last November and waits for his results.

Apart from the individuals I met waiting for the CCSE, I also spoke with Natalia, a 32-year-old Iranian woman from Tehran who works as a hairdresser. She’s been in Spain for years now. Our mutual friend is Beatriz, a teacher at the – (deep breath) – Oficina Municipal de Información y Orientación para la Integración de Población Inmigrante  (Municipal Office of Information, Orientation and Accompaniment for the Social Integration of the Immigrant Population), in the Tetuán district by the Alvarado metro. Recite that name three times fast. 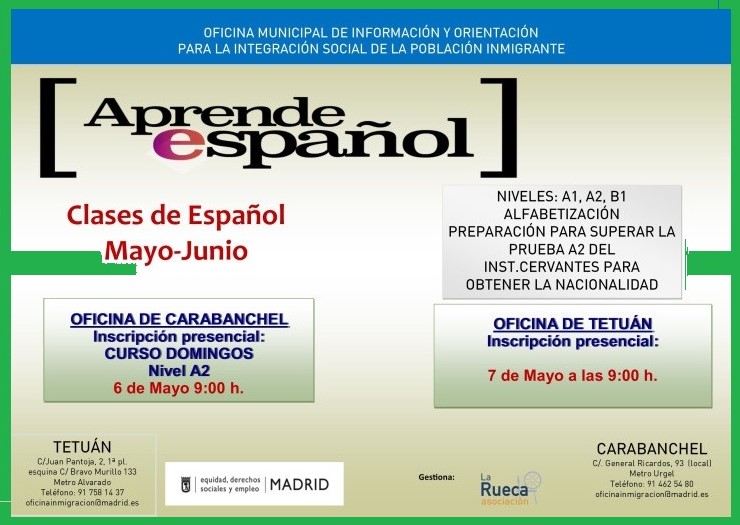 Announcement of Spanish language classes at both the Tetuan and Carabanchel centers.

There are two Centers for Immigrants under the auspices of the Madrid municipal government: the one in  Tetuan and the other in Carabanchel. “In these offices, we help people to prepare for the CCSE and the DELE A2  exams for the Spanish nationality,” said Beatriz, one of the teachers at the Tetuan center. “For DELE, we practice the tests like they do in the actual exam during the three-hour classes on Mondays.” The language instructor continued, “The DELE exam is obligatory for those who don’t have the Spanish language as a mother tongue. These people have to do the CCSE too.”

Classes in these centers are free of charge.

“In the first year,” Natalia said, “I studied Spanish on my own. Later, I started classes at Alvarado and for one or two years I had Spanish classes with Beatriz. Her classes are wonderful because she teaches very well.” Natalia also prepared for the DELE A2 at the center and took the language test this past November. 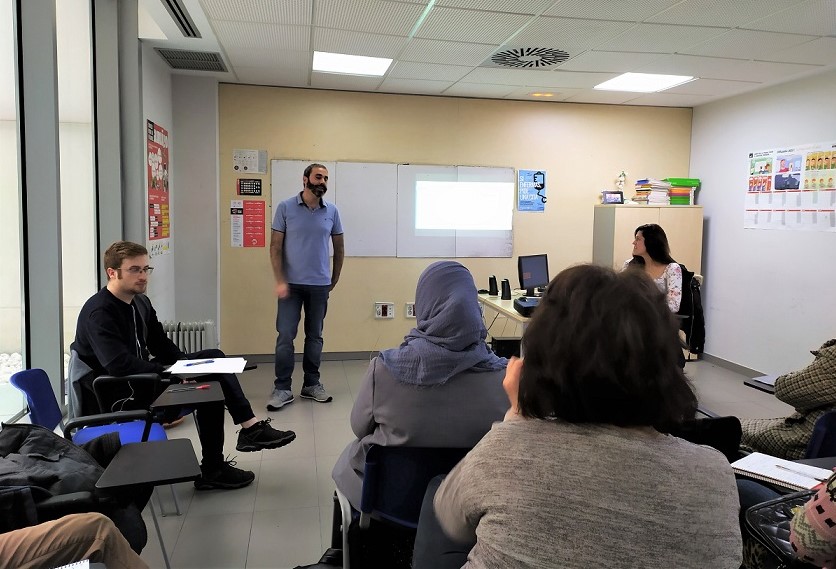 One of Beatriz’s classes at Tetuan.

“The DELE class was very useful because that’s how I learned the form of the exam and how to manage the time in taking it. For me, the DELE was hard. It was fast, I didn’t have too much time to think out my answers and there were a lot of questions. It’s confusing because they play with words a lot.” She expects to receive her DELE results this March.

“The citizenship is vital in order to be able to work and live here,” Natalia says, “I like Spain for its security and temperature, plus, learning Spanish is important because it’s one of the most spoken languages in the world.”

But there is one who who is doing it in the name of love. Irina, from Azerbaijan, is studying under Beatriz for the upcoming DELE A2 exam as well as attending Beatriz’s class in conversational Spanish. Blonde, pretty and conscientious, Irina takes her classes seriously. She says she’s applying for Spanish citizenship because she loves Spain. Even more important, it’s because of her man. Spanish, for sure. She admits she’s head over heels! 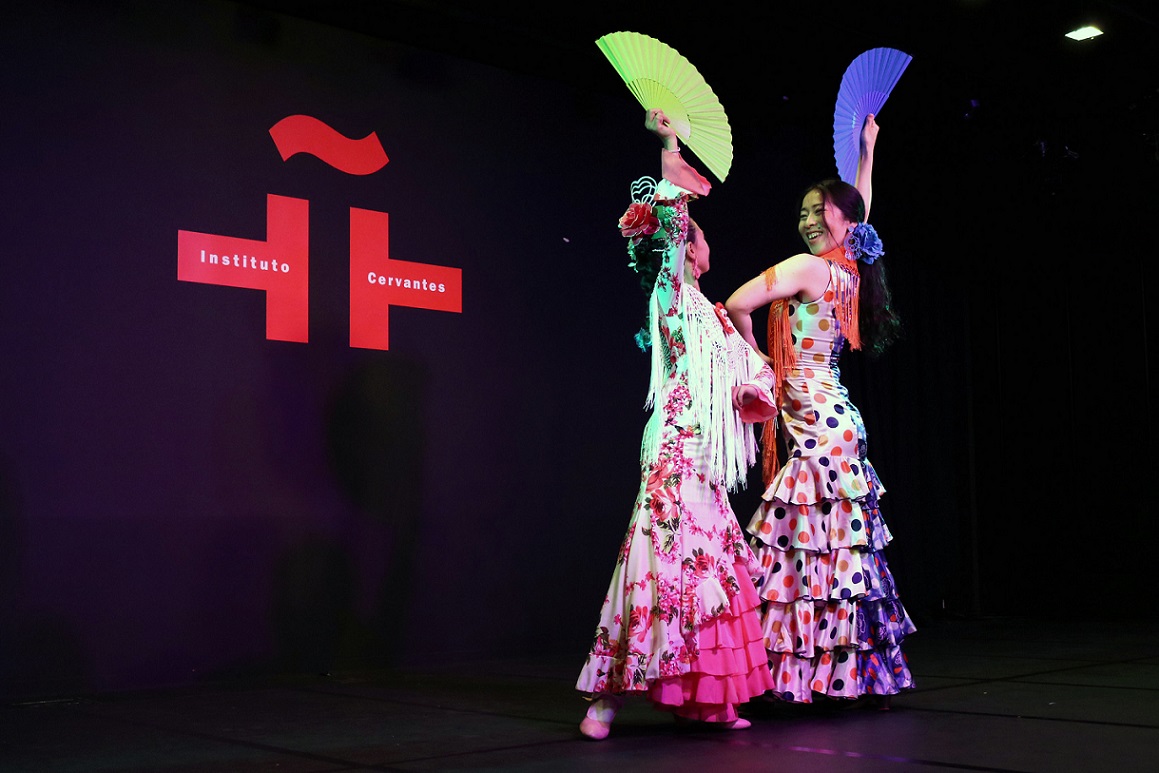 Previous article « ON BECOMING A SPANISH NATIONAL, Part 1: History of CCSE and DELE 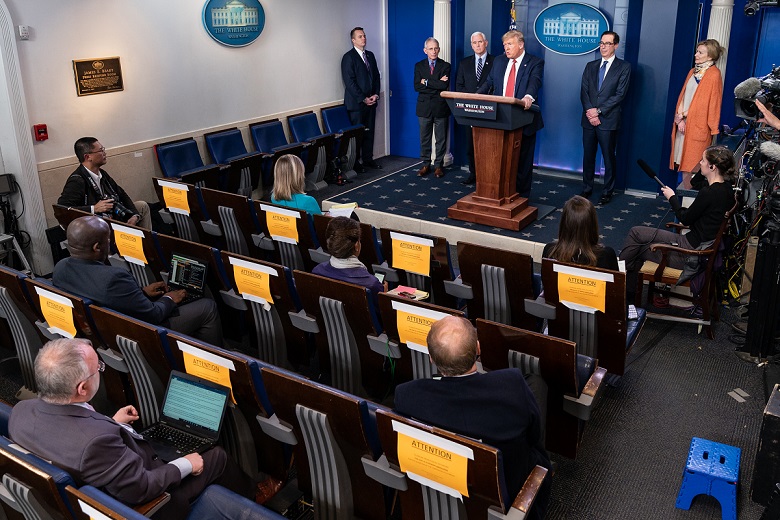