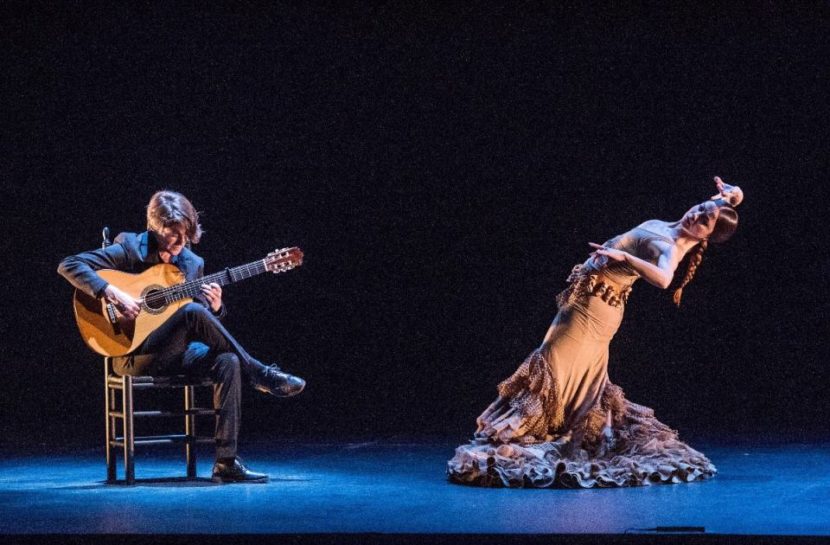 Olga Pericet is considered one of the most influential and innovative figures in the current flamenco scene.  She performed in this year’s Flamenco Festival. It was breathtaking!

Olga Pericet is considered one of the most influential and innovative figures in the current flamenco scene as flamenco dancer, master and proponent of classical Spanish dance (Bolero) and choreographer. For this year’s Flamenco Festival (March 9-18) she performed in the Gala Flamenca, a three-evening event, which brought together the finest musicians and dancers of the genre for one huge celebration. But the multiple award-winning Pericet, not content to be part of the crowd, also brought her own troupe, Compañía Olga Pericet, to the day-after party. And it was breathtaking.

In “Pisadas: A Woman’s End and Beginning,” having its New York premiere, Pericet creates a female universe with a visual and choreographic language that asserts her personal journey. She also addresses how women experience the cycles of life that hold them back as she looks to the past and moves forward into the future.

When I interviewed the diminutive Pericet in New York in November 2015 for her one-woman show at Repertorio Español, I asked her about “Pisadas,” translated as “Footsteps,” which she presented that summer in Madrid to rave reviews. (I missed it by a day.) “The show was about how to break the limitations that are put on women, the lives they have to live simply because of customs and traditions,” she related. “In many arts, especially in flamenco, there is machismo which limits women.”

At that time, it was a 14-member production, pared down at City Center by half, featuring three singers, a woman for palmas (rhythm), who also sings, two guitarists and a guest dancer, with the Córdoba-born Pericet, 41, at the heart of it. I don’t know what the full production would have looked like, but this doesn’t seem to have lost anything in translation.

Pericet opens in an elegant traditional dress with a long train, which is at first glance confining. She wears a string of shells around her waist, which echo wooden, like the sound of castanets, as she strums them with her hands and shakes them with her torso. She takes command of the train, whipping it around with her foot and body, manipulating it to her will. Her supple back arches while her fluid arms and hands gesture slowly, like feathers falling from the sky. Lifting the train up, she does exquisite footwork.

Pericet, in pants and toreador vest, performs “Pisadas” at the New York City Center Flamenco Festival 2017. With Pericet in the photo are Hermonia Borja, Tacha Gonzalez, Miguel Ortega (behind, not seen) and Miguel Levi

The marvelous singers and guitarists take over for the interlude. When she returns, she is wearing a traditional men’s outfit, a black unitard with a short black toreador vest flecked with gold trim, which is much more freeing. The four singers, Herminia Borja and Tacha González, Miguel Lavi and Miguel Ortega surround her, with Pericet playing off their driving energy and vice versa for a tour de force performance. She grabbed her long hair and twirled it around. She flipped her head back and forth. She danced as if she were in a trance-like state, exorcising personal demons. I felt drained just watching her.

The next section was an overly long solo by guest dancer Juan Carlos Lérida called “La fiera en el monte” or “The beast in the mountain.”  Lérida wore a brown mottled outfit and sported huge antlers hung around his neck and danced/pranced/strutted upon the stage channeling a primeval yet somewhat tame beast. Enter Pericet, hair in a braid, and the two of them duel dance. He gores her several times, but she is relentless. By the end, he is panting and she is cool as a cucumber, having vanquished the constraining ancient and traditional patriarchy one assumes.

Herminia Borja takes over the Spanish Ethel Merman, with her strong, booming plaintive vocals. The song is a nifty fusion of flamenco blended with elements of jazz. Pericet makes a dramatic entrance as she unwraps from a long white cloth.  She is now in a simple long muted red dress with layers of frills on the bottom. It is the “Alboreá,” or “Dawn” of a new age. Pericet has won the battles and is now free to be herself in a man’s flamenco world or in any universe this side of heaven.

Award-winning Bonnie Rosenstock wrote for Guidepost back in the 1980s when she lived in Madrid. She’s now with exploredance.com, among other publications. While working for The Villager and Chelsea Now she won three awards from the New York Press Association Better Newspaper Contest.

Previous article « BURNT AT THE STAKE!