Irene Larrañaga of Calima Calinda, upcycling at the Queen Upcylcing Alcorcon during the
Sustainable Fashion Week in Madrid. “All my clothes are upcycled,” she  declares with understandable pride. 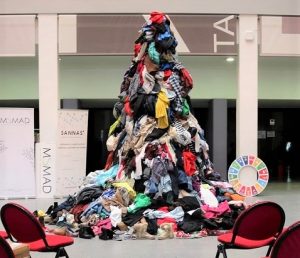 The mound of clothing soars above the heads of everyone in the lobby of Alcorcón’s municipal Teatro Buero Vallejo. From its thick base to its somewhat precarious-looking tip, the pyramidal pile is a mosaic of fabrics, patterns, and shades. As a whole, it is imposing and impressive, but many of the individual pieces of clothing look old, worn, and crumpled. 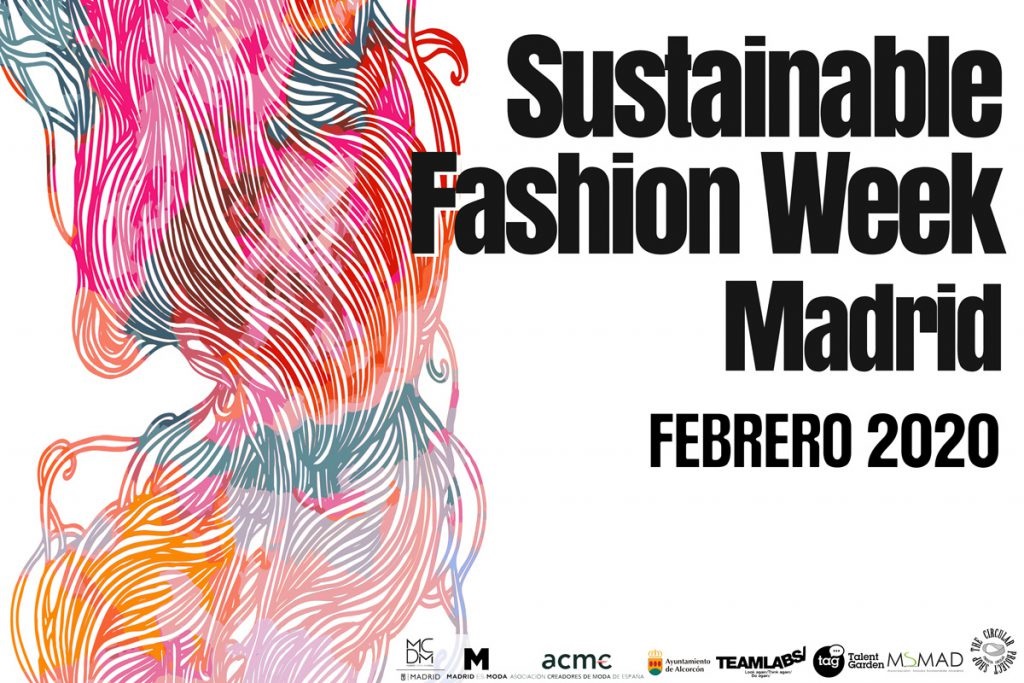 That is, until they are plucked from the pile by one of the four designers that have workspaces set up around the room. On the artists’ mannequins, new life is infused into the garments. Funky patterned shirts become garnish for denim, and strips of fabric are woven into intricate nets that overlay minidresses. This is QUEEN UPCYCLING ALCORCON, one of multiple events held during the first-ever SUSTAINABLE FASHION WEEK MADRID (SFW MADRID).

“The purpose of today is to show and demonstrate that there is another way of doing fashion,” said Patricia Astrain, founder of Recircular, a platform that connects businesses for the purpose of reducing waste. She was also an SFW panelist. “There is a sustainable way.” 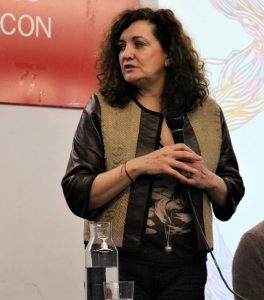 The weeklong ode to environmentally friendly style was organized by Paloma G. López, owner and founder of The Circular Project, a Madrid-based space dedicated to eco-friendly fashion. From February 5 to February 14, a free photo exhibit “Trashion, From Trash to Fashion” is being held at Teamlabs. On February 7 and 8, project exhibitions and panels were held at Madrid’s Talent Garden. 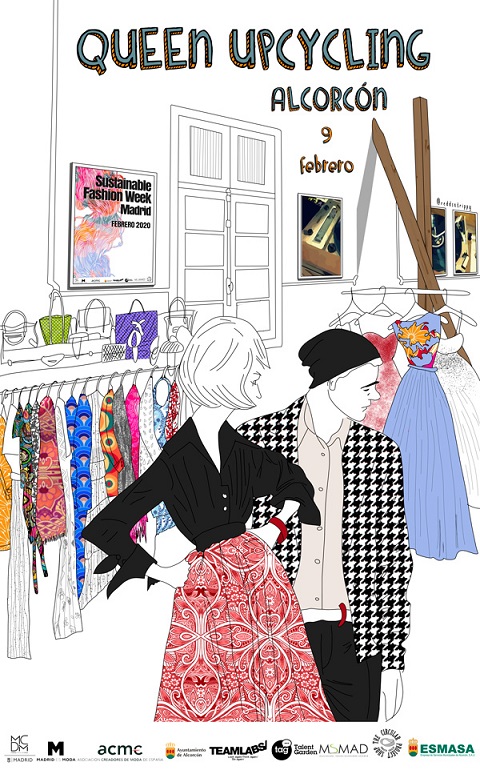 And, of course, on February 9, there was Queen Upcycling Alcorcón, described on the project’s site as dedicated to the “best upcycling and textile recycling collections in an exercise of collective reflection.” This event took place in Teatro Buero Vallejo, the municipal arts center of the city of Alcorcón in the autonomous Community of Madrid. The upcycling celebration included expositions of designers who work with used clothing, informational panels, and a catwalk featuring upcycled designs.

The event reflects a growing awareness in Spain that fashion needs to be more sustainable. According to the Asociación Ibérica de Reciclaje Textil, each Spaniard generates 14 kilograms, or about 30 pounds of textile waste each year. Watch the hordes of people pouring out of Primark and Zara on the Gran Via in the nation’s capital, and this statistic won’t seem so far-fetched.

International awareness of this issue is growing as well. According to a 2017 study from the Ellen MacArthur Foundation, the fast-fashion industry has boomed in recent years, and the average number of times a garment was worn before it was discarded decreased by 36 percent between 2000 and 2015. The same study found that less than one percent of material used to produce clothing is recycled into new clothing, representing an annual loss of more than $100 billion.

When asked if Spain was a leader in the worldwide sustainable fashion movement, designers and speakers at Queen Upcycling Alcorcón were quick to say no. However, all agreed that the concept is steadily growing in popularity. 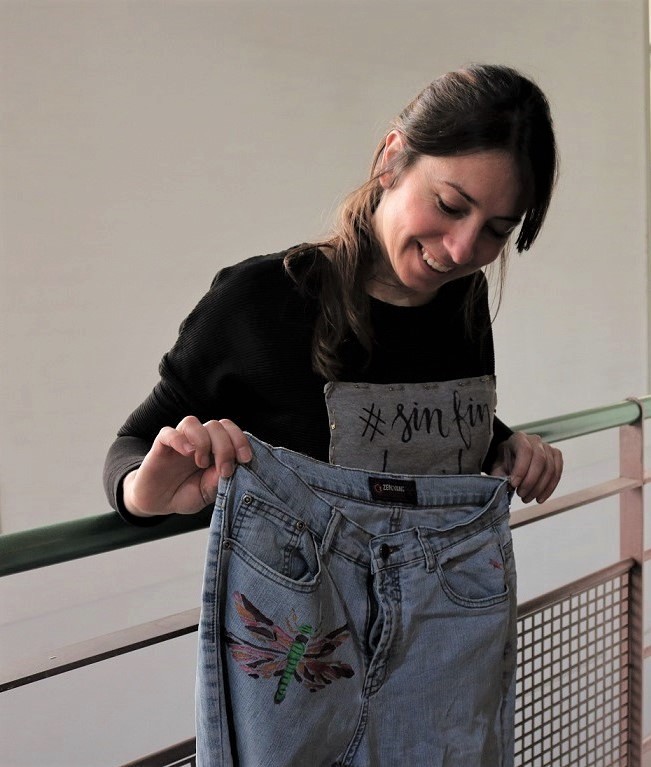 Happy with her customized jeans, Marcet shows it off!

Mariola Marcet, founder of Upcyclick which allows customers to customize and reinvigorate their old clothes, remembers a time in the recent past when secondhand clothing was frowned upon in Spain. According to Marcet, while other countries accepted thrifted pieces, and even embraced them as chic, it was generally believed in Spain that secondhand clothing was for those without money and resources. She would, however, add that an entirely novel perspective has taken hold among the current generation.

“The young people are shopping in secondhand shops,” Marcet said. “It is more normalized now in Spain.”

The tide is turning, and from the swirling waters of change an entire generation of upcycling designers are rising. The passion of the designers working at Queen Upcycling Alcorcón was palpable in the way they tenderly handled the fabrics.

Upcycling, says Iriépar, is much different than mainstream designing. It requires you to work backwards, search for the fabrics before you can sit down and sketch out a design.

While intently focusing on her stitching, Olga Iriépar García, owner of A Pompidou Ecofashion, explained that upcycling is much different than mainstream designing. It actually requires you to work backwards, she said, because you have to search for the fabrics before you can sit down and sketch out a design. Yet it is a labor of love.

“The most rewarding part is knowing that you are contributing to reducing a little waste,” said Irene Larrañaga, who was working on her own design a few feet away from Iriépar. Larrañaga founded upcycling brand Calima Calinda last August. “All my clothes are upcycled,” she  declared with understandable pride.

Even large Spanish corporations are becoming more cognizant of their environmental impact. Inditex, parent company to such megabrands as Zara, Pull&Bear, Oysho, and Stradivarius, recently rolled out promises to become more sustainable. Their initiatives include switching to recycled materials and aiming to no longer send any waste to landfills by 2025. 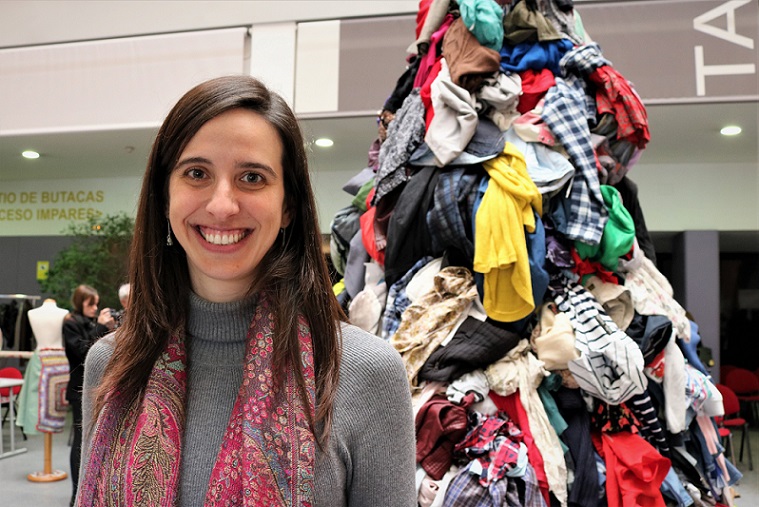 “The circular economy is bubbling everywhere, in every sector, in everything we do here in Spain,” Astrain said, referring to an economic model focused on reducing the constant consumption of resources “It’s a great moment for us to move forward and push for it.”

Related post
Harvard Business Review: You Can’t Heat Up the Planet and Still be the World’s Top CEO 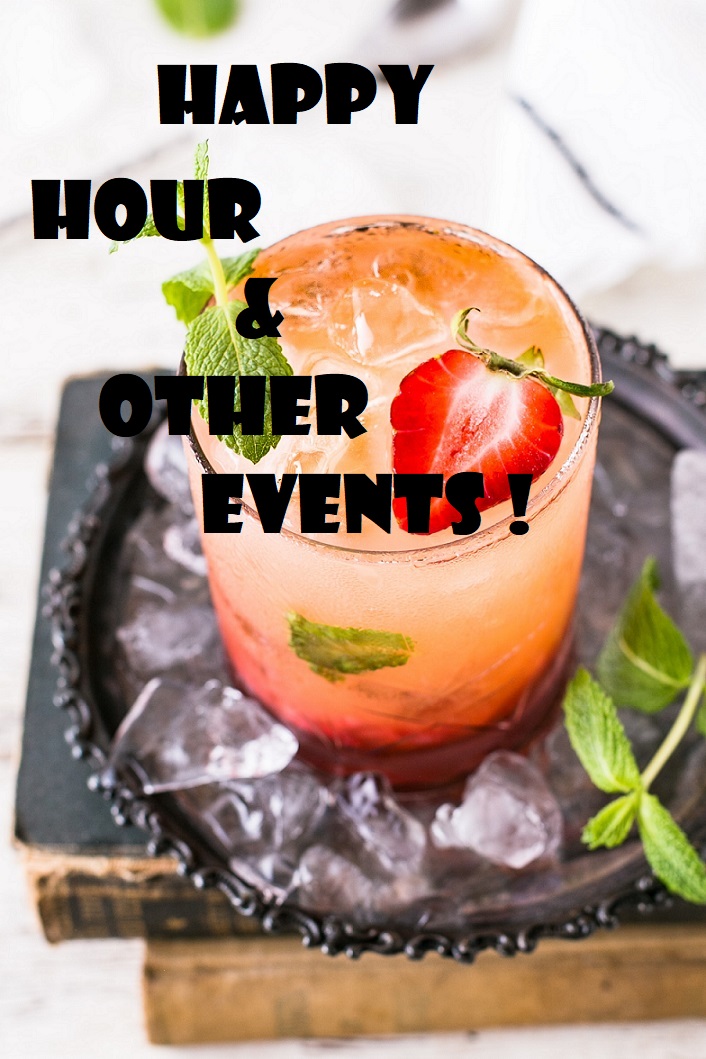