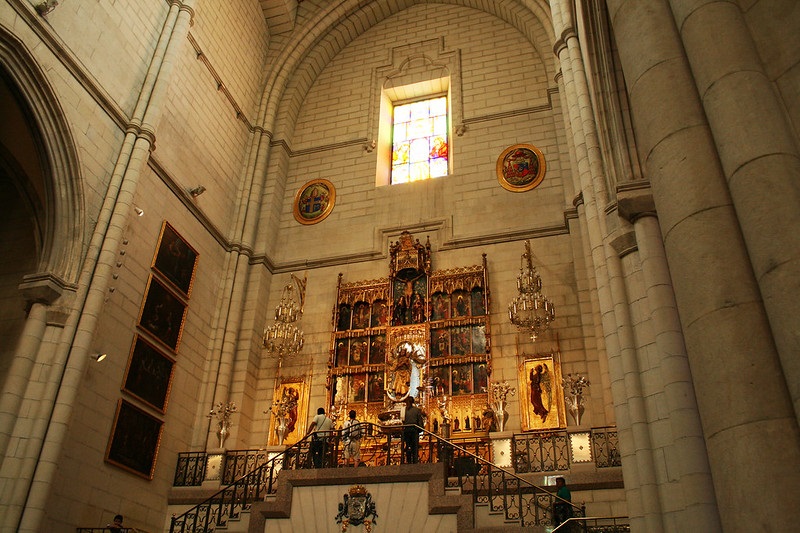 The original wooden statue of Our Lady of the Almudena, center,
at the main altar of the cathedral named for her

On 9 November the Madrileños celebrated the Feast of Our Lady of the Almudena, one of their two Patron Saints, the other being St. Isidore (San Isidro) whose feast day falls on the 15th of May. The 9th was a lovely day, cool, crisp, and sunny. Typical of Madrid in the early Fall. The air was fittingly festive. The weather couldn’t be better; you’d think the Mother of Jesus Christ had asked it of her Son. 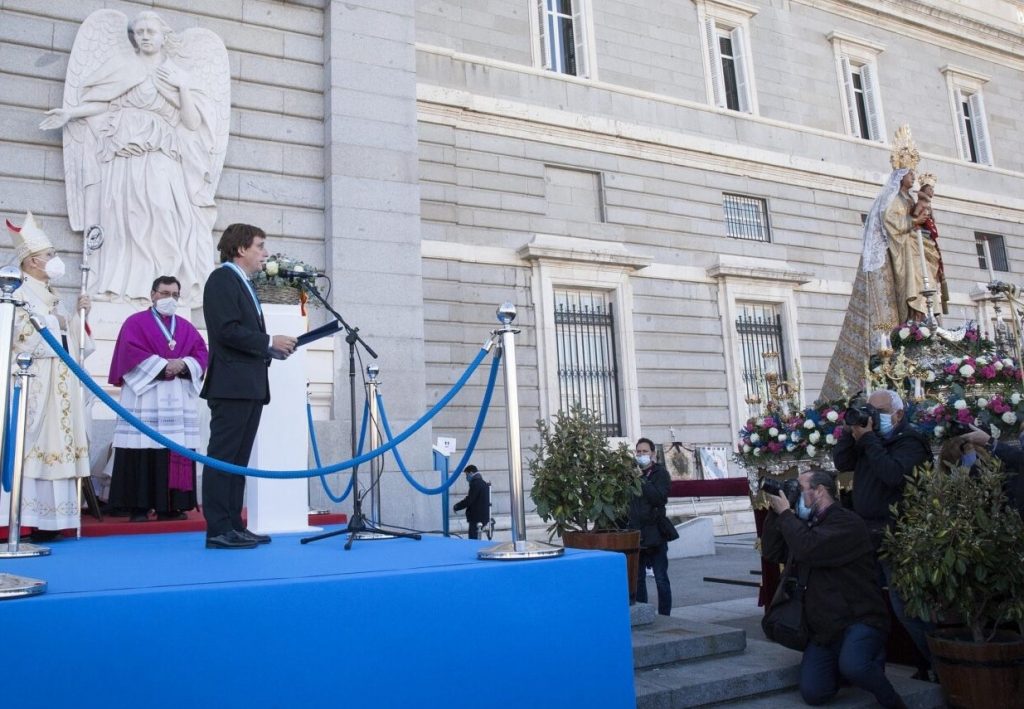 At the High Mass, with Madrid Mayor asking Our Lady of the Almudena to intercede for Madrid

The focal point of the celebrations was the plaza of the Almudena Cathedral beside the Royal Palace on Calle Bailen. It has to be. The Cathedral is her home; it is dedicated to her. 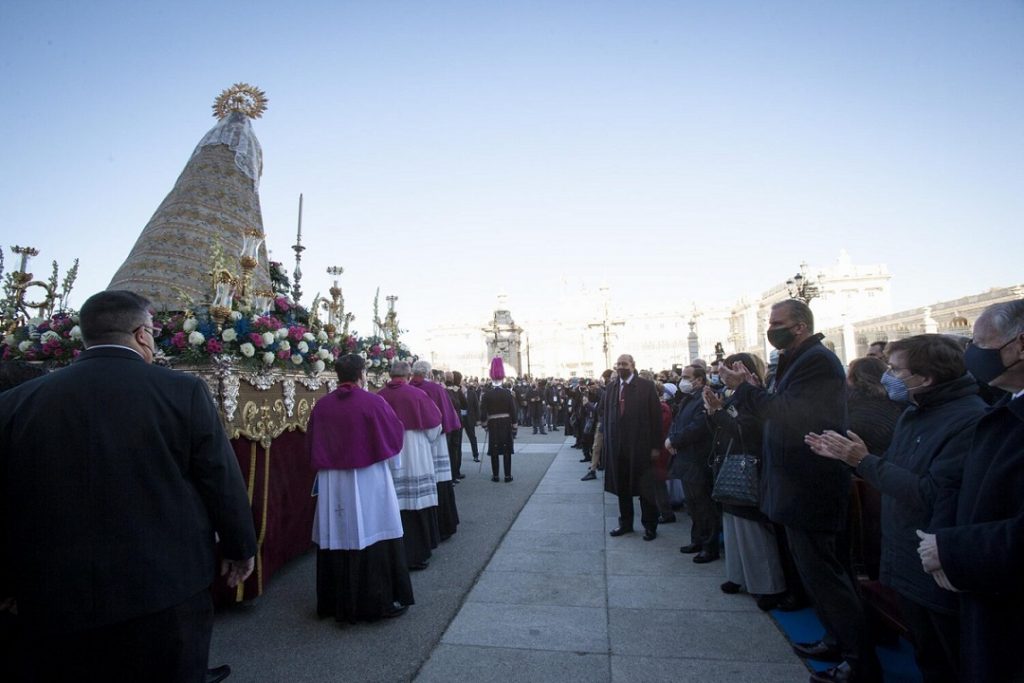 The revered Almudena statue was taken out in a procession, and the traditional High Mass was officiated in her honor by the Archbishop of Madrid, Cardinal Carlos Osoro. During the mass, Mayor Jose Luis Martinez-Almeida asked Our Lady to intercede in “relaunching Madrid toward a future of unity, prosperity, and social justice.” 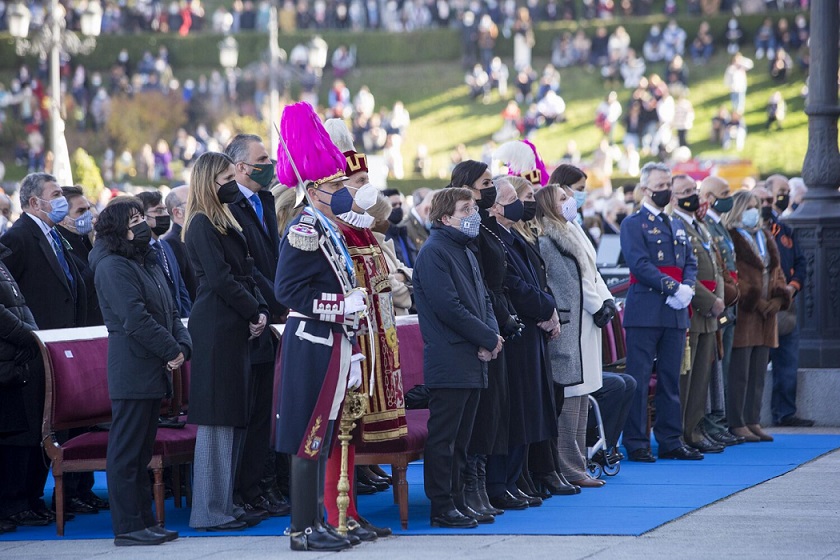 Officials of the City and Autonomous Community of Madrid attending the festivities. See people joining the celebrations in the background

After which the people offered thousands of flowers at her feet. It is a wooden medieval statue attributed to Diego Copín, a sculptor of Dutch descent who worked actively in Spain between the last quarter of the 15th and the early 16th centuries. 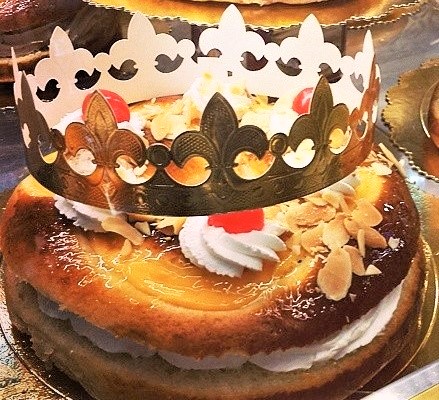 And of course they feasted too — on the corona de Almudena (Almudena Crown) which is very much like the roscón de Los Reyes (The Magi cake).

Legends surround the statue of the Virgin of Almudena, and as is characteristic of legends, there’s a mismatch between the mythical dates and historical facts. 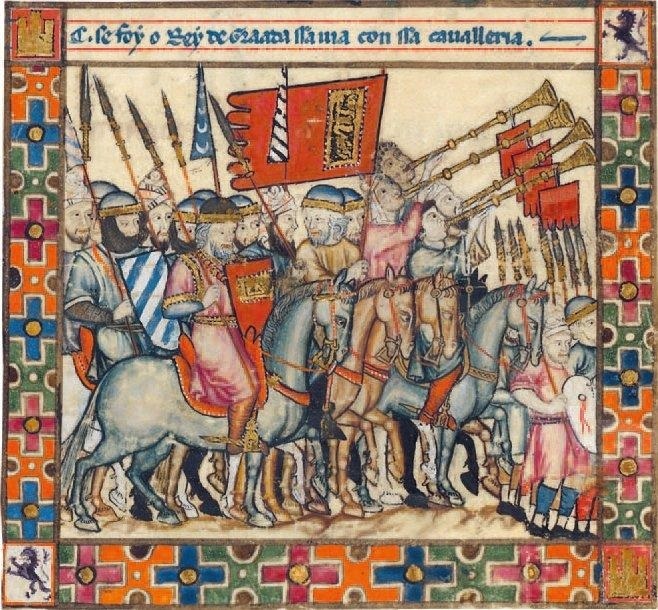 A depiction of the Moors in Iberia

One of the most popular stories says that in 712 AD, before the settlement on what is now called the River Manzanares fell to the Muslim invaders, the inhabitants sealed the image of Our Lady inside the surrounding walls.

The river, which was named al-Magrit by the conquering Moors, means water source in Arabic. The areas around it they called Mayrit, which comes from the Arabic Mayra (meaning water or giver of life), which was later changed to the Magerit, a place of water. The name evolved further and became Matrit until it finally became Madrid. Incidentally, the name Matrit is still found as a Spanish gentilic.

Muslim wall built in the 9th century, beside the Cuesta de la Vega. See the neo-Romanesque crypt of the Almudena Cathedral.

Centuries later, when Madrid was wrestled away from the Moors by King Alfonso VI of Castile (11th century), the Christian soldiers endeavored to find the statue. After days of prayer, a spot on the wall crumbled, revealing the hidden statue. 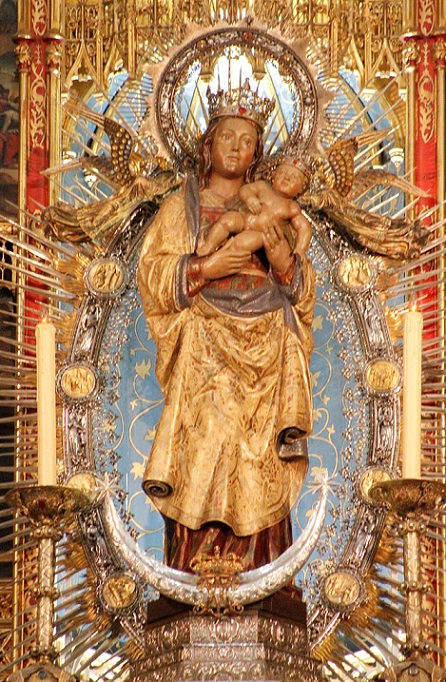 Another legend goes this way:  As Christian soldiers approached Matrit during the Reconquista, they had a vision of the Virgin Mary asking them to let her lead them into the town. On the 9th of November 1085, the wall crumbled miraculously to reveal the statue which showed them an entry route through the walls Matrit.

As to why the Virgin Mary, whose statue was revealed to the Christians in the 11th century, is called the Virgen de la Almudena, it is because the “Matriteños” found her statue inside the fortress wall or almudayna in Arabic. On finding the statue, they started to call it Virgen de la Almudena (Our Lady of the Almudena). 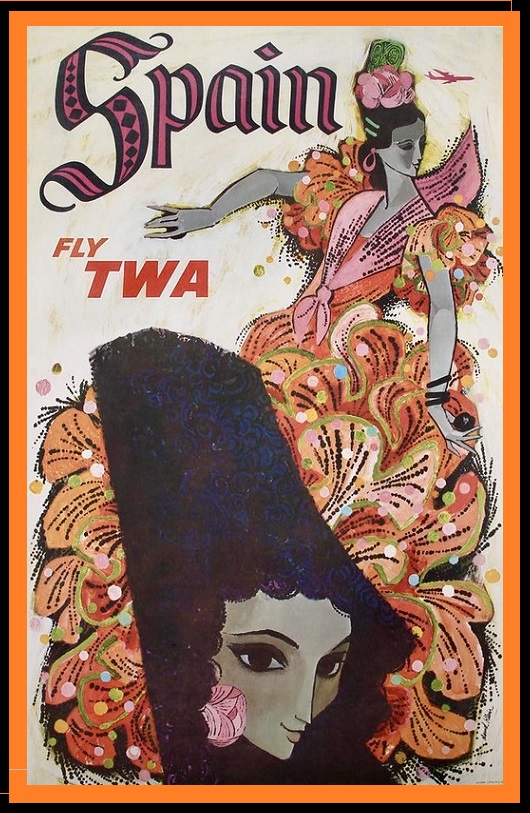 Next article A NOSTALGIC LOOK AT MADRID’S CAFES OF OLD »