MADRID AND BARCELONA AT LOGGER HEADS 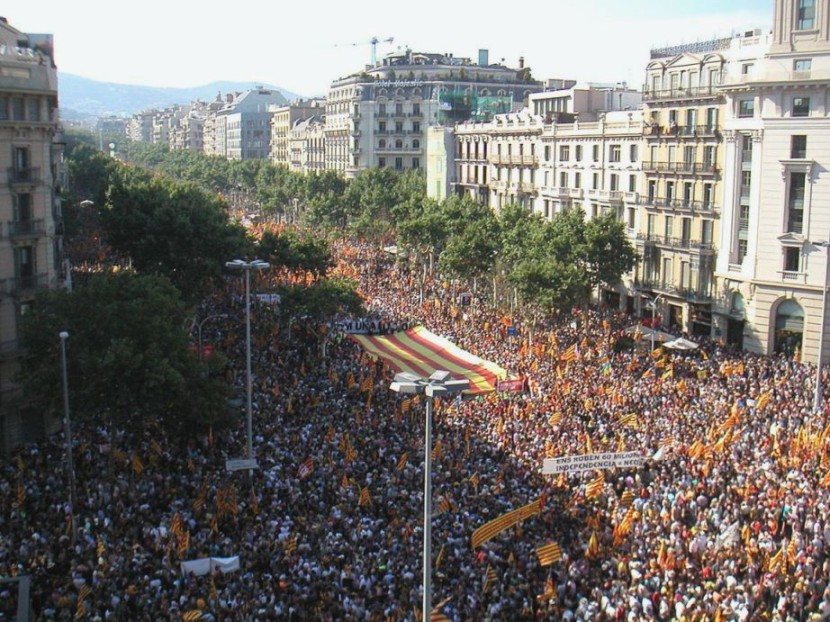 Last 19 September lawmakers of the autonomous northeastern region of Catalonia, one of Spain’s richest and most industrialized regions whose capital is Barcelona, voted to authorize the referendum on whether Catalans would like to have an independent state despite the fact that the central government has been saying that such a referendum, which the Catalan government euphemistically calls “consultation,” is unconstitutional. The regional parliamentarian “Yes” vote was overwhelming: 106 against the 28 “No” vote, or 79% of the Catalan MPs. Moreover, the “consultation” has popular support.

But this does not mean that a great majority of the Catalans favors independence from Spain. It only means that, presumably, this majority wants to have the freedom to say yes or no. Some polls indicate that the Catalan independence vote is split in the middle.

On the 11th of this month, the Diada (national day) of Catalonia, thousands of Catalans formed a gigantic “V” on Barcelona’s main streets demanding the right to vote.

As the president of the Generalitat of Catalonia Artur Mas has said after signing the parliamentary vote into law on 27 September, “Catalonia wants to speak. Wants to be heard. Wants to vote.” He claimed that the Catalans “have the right legal framework to do so.” And this is where the choice of the word “consultation” comes in.

President of the Generalitat of  Catalonia Artur Mas

The Catalan government calls it the “Law on Consultation Votes” and says it is a “non-binding consultation vote on independence.”  Since it is not a referendum submitted for direct vote of the Spanish electorate, it can neither be unconstitutional nor illegal. A “consultation” can’t be a binding vote that violates Article 2 of the Spanish Constitution which is “based on the indissoluble unity of the Spanish Nation, the common and indivisible homeland of all Spaniards.” While the Article “recognizes and guarantees the right to self-government of the nationalities and regions of which [this Nation] is composed,” it imposes “solidarity” among all these nationalities.

Apart from Article 2, the central government is invoking a ruling of the Constitutional Court to support its outright rejection of the Catalan law, that is, the Constitutional Court ruling 103/2008 which upholds that any popular inquiry in regard to the unity of Spain as a sovereign state is unacceptable unless a referendum, with all the Spanish citizens of voting age participating, for a constitutional reform to authorize it is held.

JCC 103/2008 is a ruling against the Basque Parliament Law 9/2008 of 27 June which “authoriz[ed] the Lehendakari [President of the Basque Country] to submit two questions for a non-binding consultation of the citizens of the Basque Country on 25 October 2008 . . . The issues in question . . . [centered] on the support of a ‘process of ending violence through dialogue’ and the start of a ‘process of negotiation in order to reach a Democratic Agreement on the exercise of the Basque people’s right to decide’, an Agreement which should be subjected to referendum by the end of 2010.”

The Consitutional Court in Madrid

Given the foregoing, the Constitutional Court ruled: “The Constitutional Court, WITH THE AUTHORITY CONFERRED BY THE CONSTITUTION OF THE SPANISH NATION, declares the unconstitutionality and subsequent invalidity of the Basque Parliament Law 9/2008 of 27 June, for the convocation and regulation of a popular consultation for the purpose of obtaining the public’s opinion in the Autonomous Community of the Basque Country on the opening of a negotiating process for achieving peace and political normality.”

But will the consultation really take place? It won’t be long now before the Spanish people – and that includes the Catalans – will know how far the central government presided by Prime Minister Mariano Rajoy, who to date has refused any kind of dialogue with Catalonia, will go to stop the referendum, and how far the Catalans will go to insist on it. They already have marked the 9th of November as the V-Day despite knowing before hand that Rajoy’s government will contest it.

Mas says he will abide by the laws of Spain but has also hinted that if the central government blocks the “consultation” he just might call a snap election in Catalonia which to all intents and purposes will work out as a plebiscite on Catalonia’s independence.

A core group that advocates independence has always existed in and for Catalonia. These Catalans believe that there is a long history behind the Catalan nationhood to warrant independence.  Besides, they feel that their “nation” is being burdened by unfair fiscal policy and resent what they sense as contemptuous political treatment from the central government in Madrid. These feelings have been aggravated by the hardship brought on by the multi-dip recession that has been gripping Spain for years now.

This same recession is, to a considerable extent, responsible for the current upsurge of secessionism and the dramatic increase in the number of pro-independence Catalans.

Photo
>Featured image: Protest march in Barcelona on 10 July 2010 with the slogan “We are a nation. We decide.”  The organizars estimated than 1.5 million demonstrators joined the march while the national daily El País estimated that there were some 450,000. By amadalvarez:  http://ca.wikipedia.org/wiki/Usuari:Amadalvarez.  CC-BY-SA30
>Diada demonstration by NIKLAS ALMESJÖ. CC-BY-SA 3.0
>Artur Mas by Martorell45:  http://commons.wikimedia.org/wiki/User:Martorell45 . CC-BY-SA 2.0
>Constitutional Court by Invisgoth:  http://commons.wikimedia.org/w/index.php?title=User:Invisgoth&action=edit&redlink=1.  PD
>Mariano Rajoy and his government. PD

Next article GUIDEPOST REPRINT: “From Summer to Fall” 50 Years Ago »