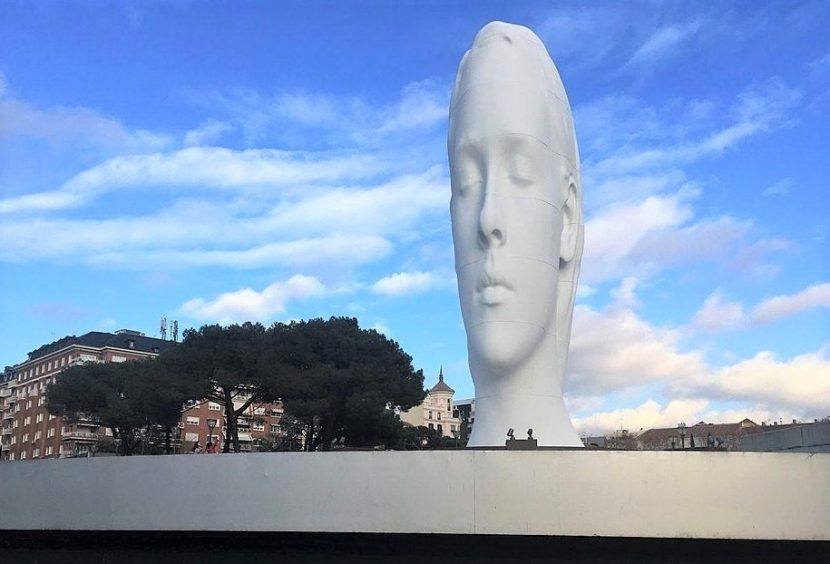 She came in December 2018 on a one-year contract and was asked to stay just a little bit longer. She stayed on for another year. And then another. She’s not leaving until the end of 2022 to the delight of the Madrileños.

Precious and photogenic, Julia imparts peace and serenity. And as sculptor Jaume Plensa of Barcelona told the press, she’s “tenderness and silence.”

She’s Julia, she’s 12 meters high and is made of polyester resin and white marble dust. Her eyes are shut; she has been conceived and birthed by Plensa “to inspire personal, intimate reflection in the hectic rhythm of the public space.” 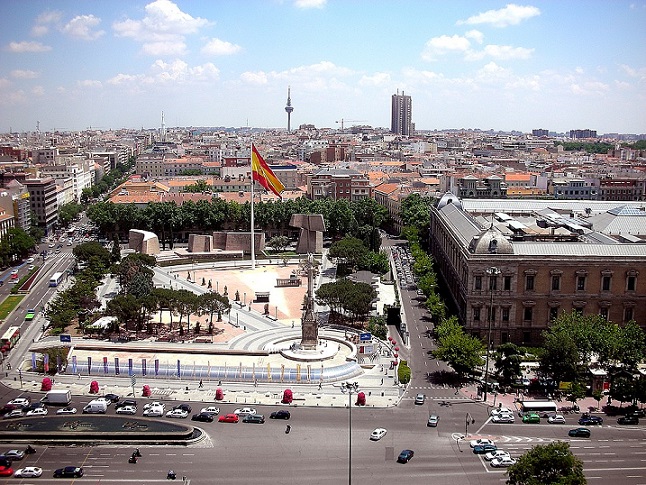 Plaza de Colon, marked by the huge Spanish flag on a towering pole. Foreground, right: the statue of Columbus who was on the payroll of the Spanish crown for voyages of exploration, resulting in the discovery of the Americas. These days Julia occupies the pedestal where Columbus once stood. In 2009 the explorer-navigator’s statue was transferred to the rotonda on Paseo de la Castellana. (The Plaza is flanked by the National Library on the right.)

She’s on the old pedestal where Colon (Columbus in English) used to be – in the Plaza de Colon, where else? From there she’ll proceed to the next stop in her world tour. Plensa observed in the ABC newspaper that “she has brought tenderness to Plaza de Colon, a fundamental place in the city. . . It’s very nice to see Julia so serene, so concentrated in herself, while there is so much traffic about, so many demonstrations. . .  (Ha introducido ternura en la Plaza de Colón, un lugar clave de la ciudad. Es muy bonito ver a Julia tranquila, concentrada en ella misma, mientras en la plaza hay mucho tráfico, manifestaciones…)”

Julia is not the product of pure invention. She exists in real life. At least, she was modeled on a young girl from the lovely northern Spanish city of San Sebastian.

If you still haven’t met Julia, you have until the end of this year to do so, as said. 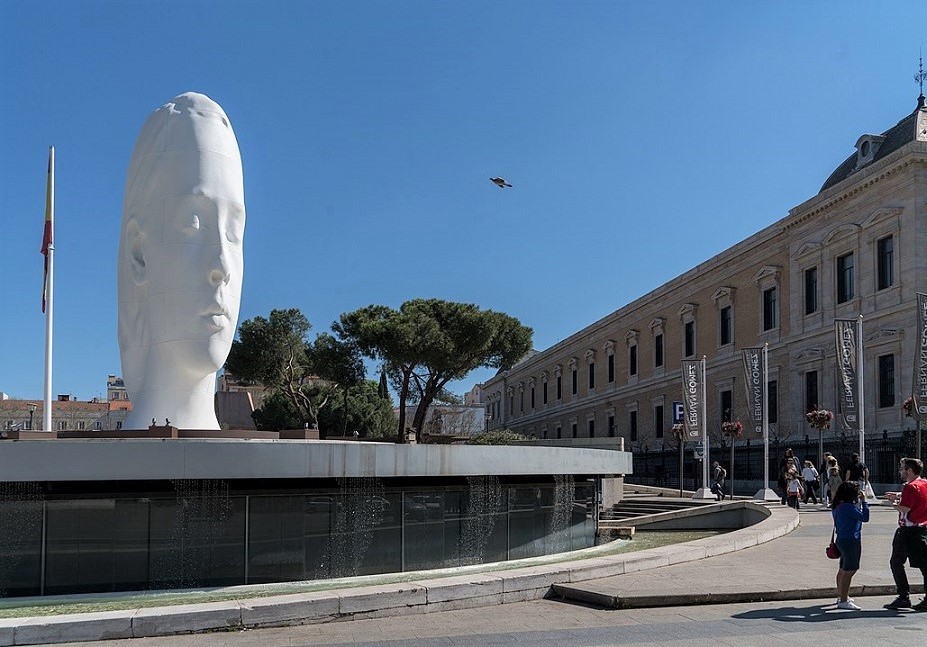 Julia seen from the National Library.

The Madrileños were asked if they would like Julia to remain permanently in their city. Their answer was an unequivocal affirmative. Plensa was touched and said if it were left to him alone, he’d let Julia stay. However, he doesn’t own the sculpture, he says. It’s the Fundación María Cristina Masaveu Peterson who does. He added that he understood the Fundación’s desire to let Julia visit other places. When Julia’s tour is over, she will come home to the Fundación on Number 6 Alcalá Galiano Street in Madrid. She is part of the Masaveu art collection.

The Julia exhibition in Plaza de Colon is a joint initiative of the Fundación Cristina Masaveu Peterson and the Madrid City Council to bring art to the streets of the nation’s capital. Hence, Julia is meant to lead to similar projects in the future wherein the works of art to be exhibited are chosen by public tender as was how Julia was picked for the Plaza de Colon exhibition. 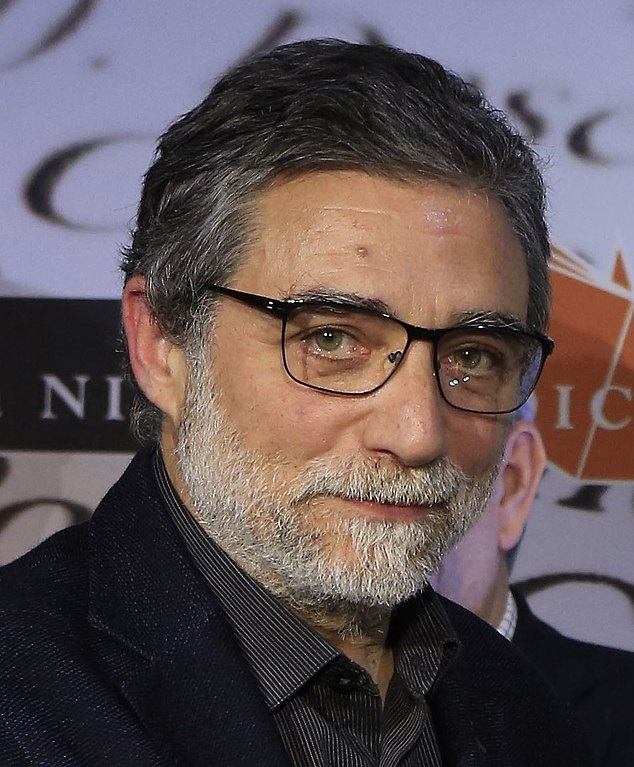 Jaume Plensa is a 66-year old barcelonés. He studied at the Escola de la Llotja and the Reial Acadèmia Catalana de Belles Arts de Sant Jordi. Among the awards and honors he has received are the Medaille des Chevaliers des Arts et Lettres from the French Minister of Culture, 1993; Doctor Honoris Causa by the School of the Art Institute of Chicago, 2005; the Marsh Award for Excellence in Public Sculpture, an annual award for public sculpture in the UK or Ireland, 2009; and the Velázquez Prize for Visual Arts from Spain’s Ministry of Culture, 2013. Plensa’s first exhibition was in Barcelona in 1980. From there he has exhibited and lived in Germany, Belgium, England, France and the USA. He is now back in Barcelona. 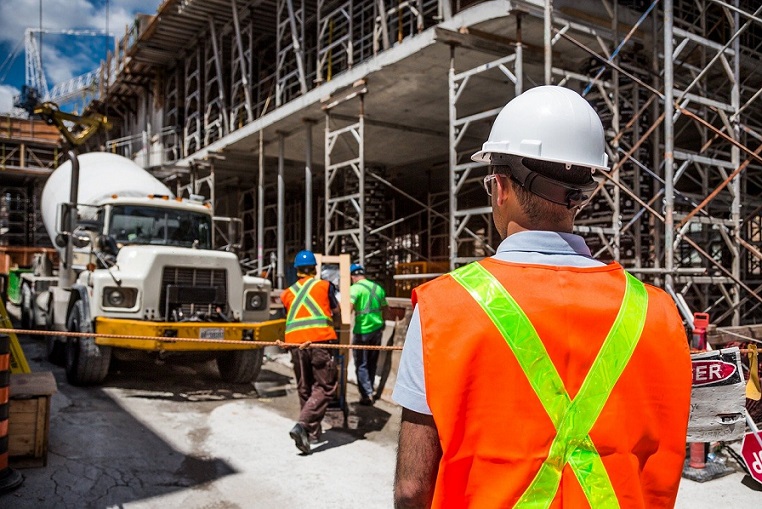 Next article A Second Opinion: Russia Tempting the Start of WWIII over Ukraine »