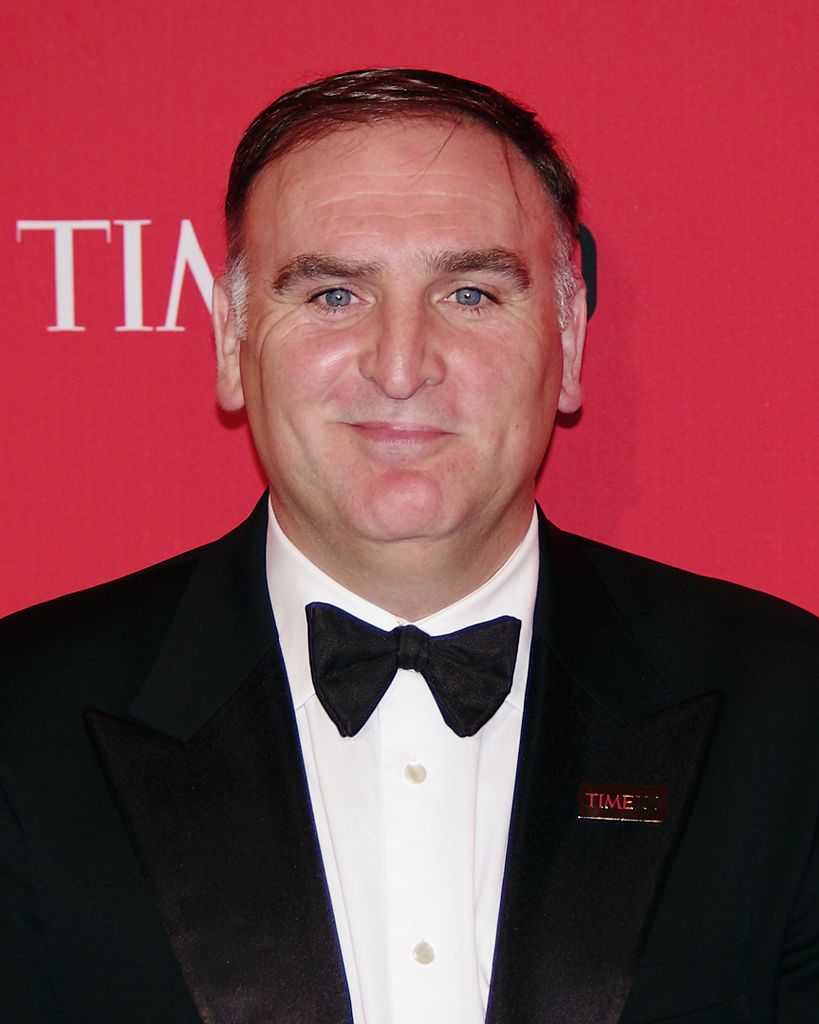 “Because of Mr. Andres’s work, millions of people have been fed. This is the most basic human need and Mr. Andres has proven to be world-class in this essential humanitarian field. With an incredible spirit and an innovative mind, Mr. Andres is solving one of the world’s ancient problems and supplying world leaders with a new road map to provide more effective disaster relief in the future,”  Rep. John Delaney, 6th Congressional District, MD.

The Nobel Committee states that it “does not announce the names of nominees, neither to the media nor to the candidates themselves. In certain cases, names of candidates appear in the media. These advanced speculations are either the product of sheer speculation or information released by the person or persons behind the nomination.” Somehow The Washington Post got hold of the document that expounded the Democratic Congressman’s reason for nominating José Andres for the Nobel Peace Prize.  And so for many weeks now, long before the 1 February 2019 deadline for nominations, Delaney’s reason has become common knowledge. 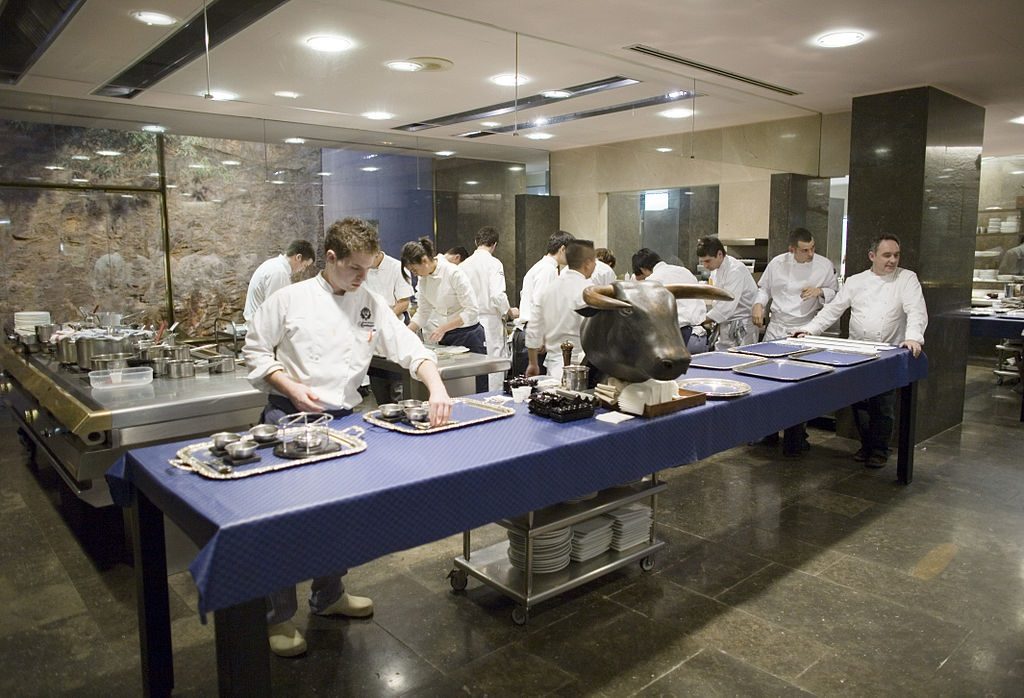 José Ramón Andrés Puerta, known popularly as José Andrés, was born in the coal mining town of Mieres, in the Principality of Asturias, Spain on 13 July 1969. However, when he was just 5 years old, his family moved to Barcelona where he enrolled at the prestigious Escola de Restauració i Hostalatge between the ages of 16 and 18 (1985 – 1987). In 1988-1989 he apprenticed at the famed elBulli restaurant with his mentor and friend, three-star Michelin chef Ferran Adrià, one of the world’s best chefs.

The following year, José Andrés, 21 by then, emigrated to the United States, becoming a naturalized American in 2013 presumably without losing his Spanish citizenship. (Spaniards may remain Spanish citizens after acquiring American citizenship as long as they sign the Acta de Conservacion de la Nacionalidad Española within 3 years of American naturalization.)

He went straight to work at the newly opened El Dorado Petit restaurant on West 55th Street in Manhattan which, according to Bryan Miller of The New York Times, “promised to introduce the distinctive and little-known seafood-based cuisine of Catalonia.” 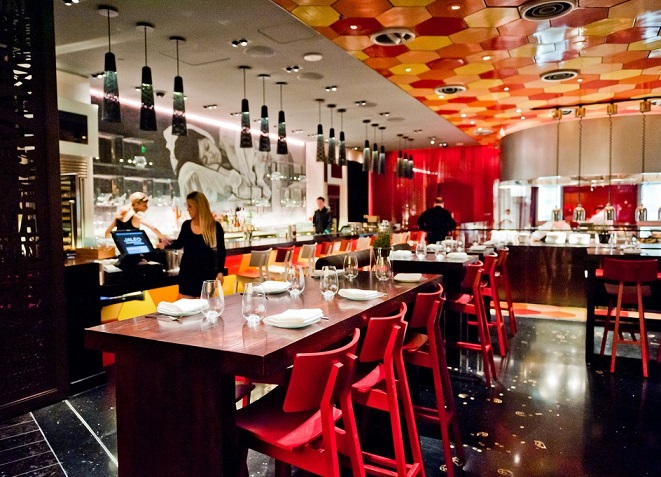 El Dorado Petit keeled over only two years after inauguration; whereupon José Angel headed toward Washington DC and founded Jaleo, his first tapas restaurant (1993). Leading the team of himself, and Rob Wilder and Roberto Alvarez of the Proximo Restaurants, José Andrés brought in and kept the exuberant spirit and flavors of Spain alive in the tapas restaurant, showcasing the rich regional diversity of Spanish cuisine in a festive and casual yet stylish ambiance.

José Andrés is widely credited for triggering the small-plates (tapas) craze in the U.S.A. when he opened Jaleo in a surprisingly rough neighborhood of the nation’s capital. Fittingly, one of the many honors the Spanish-born celebrity chef has received was Chef of the Year by the Restaurant Association of Metropolitan Washington (2006).

The secret of Jaleo’s sustained synergistic success may well lie with keeping an exciting balance between embracing the local community in which it is located and converting the venue into a place of discovery for things Spanish. Jaleo’s “local community”, apart from downtown Washington DC, now extends to Maryland, Virginia, and Las Vegas. Another Jaleo is coming up in Dubai. This ensured the iconization of José Andres as an indispensable restaurateur.

Crucial on several counts, Jaleo was the springboard for the José Andrés’s ThinkFoodGroup which now consists of some 30 restaurant concerns, chiefly in the United States but in other countries too, including Pepe Food Truck scattered around the country and Mexico City.

José Andrés is the only chef in the world who has been awarded a two-star Michelin (for the “minibar by José Andrés” restaurant-within-a-restaurant) and four Bib Gourmands (for Oyamel, Jaleo, China Chilcano, and Zaytinya). Defining Bib Gourmand, Michelin Guide states that it is a “value-for-money award [that] proves that great food doesn’t have to come with a hefty price tag. A Bib restaurant will leave you with a sense of satisfaction at having eaten so well at such a reasonable price.”

The ThinkFoodGroup’s other award-winning restaurants include J by José Andrés at W Mexico City, the Bazaar by José Andrés at the SLS Hotel in Beverly Hills, and Beefsteak which embodies a vegetable-driven fast-casual concept.

Then came the non-profit World Central Kitchen which José Andrés founded in 2010 in the wake of the devastating earthquake in Haiti. WCR “provides smart solutions to hunger and poverty by using the power of food to empower communities and strengthen economies.” 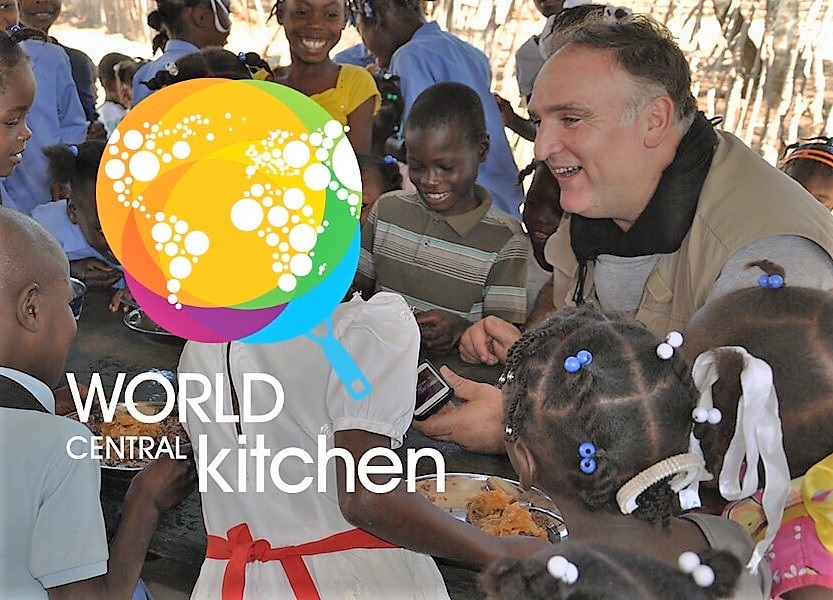 Not surprisingly, this chef of the first order who pioneered in Spanish tapas in the United States, and is at once an avant-garde culinary innovator, author, educator (he taught Science and Cooking at Harvard, and was named Dean of Spanish Studies at the reputable International Culinary Center with campuses in California and New York, etc.), chef-owner of ThinkFoodGroup, TV personality, AND a great humanitarian gifted with uncanny empathy, has picked up almost every imaginable award and distinction on the scene.

In 2017 he received the Lifetime Achievement Award from the International Association of Culinary Professionals, and the National Humanities Medal from the National Endowment for the Humanities in 2015. Andrés was also named EY (Ernst & Young LLP) Master Entrepreneur of the Year in Greater Washington. Per  www.ey.com/us/, the distinction is “bestowed upon an individual who distinctly outperforms the customary characteristics of an entrepreneur, exemplifies leadership at its best, drives a successful business or brand with notable longevity and greatly contributes to the local economy and community.” 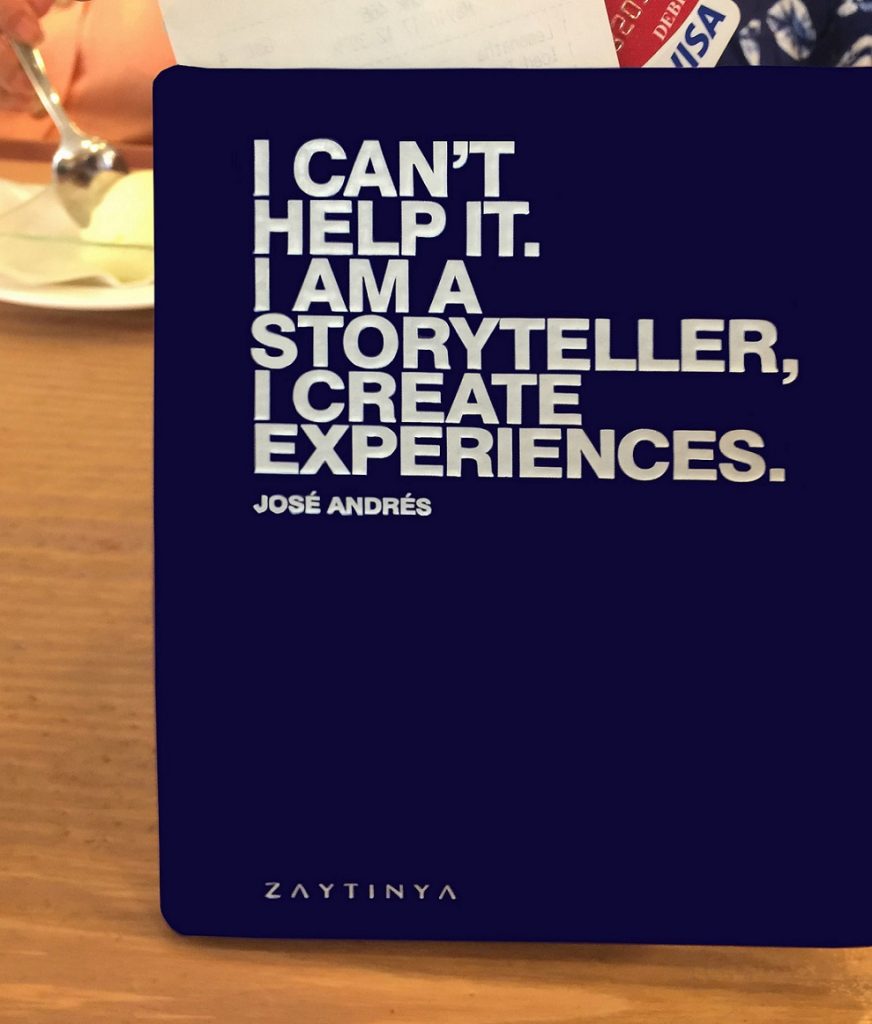 A Declaration at the Zaytinya Restaurant/Ron Cogswell, CC BY2.0

More:
> 2012 and 2018, one of Time’s 100 Most Influential People
> 2018 Humanitarian of the Year, by the James Beard Foundation whose “mission is to celebrate, nurture, and honor chefs and other leaders making America’s food culture more delicious, diverse, and sustainable for everyone.” (Andrés has also won the JBF Best Chef in America, 2003; Who’s Who of Food & Beverage in America, 2007; and Outstanding Chef, 2011)
> 2009 Men of the Year, and 2012 50 Most Powerful People in Washington, GQ Magazine
> 2010 Spanish Order of Arts and Letters medallion
> 2011 Innovation Award, UCLA Extension Restaurant Industry Conference
> 2012 American Chefs Corps, US State Department Diplomatic Culinary Partnership
> 2012 Español Universal Prize, US-Spain Chamber of Commerce
> 2013 Hispanic Heritage Award Honoree
> 2014 Honorary Doctorate of Public Service from George Washington University
> 2015 Named by Pres. Obama Presidential Ambassador for Citizenship and Naturalization
> 2016 Hunger Leadership Award from the Congressional Hunger Center
> 2017 Honored by the Historical Society of Washington, D.C. for “Distinction in Corporate Achievement”
> 2018 Along with World Central Kitchen, José is given the Award for International Commitment by the Arab-American Institute

The list is too long for all of it to fit here. 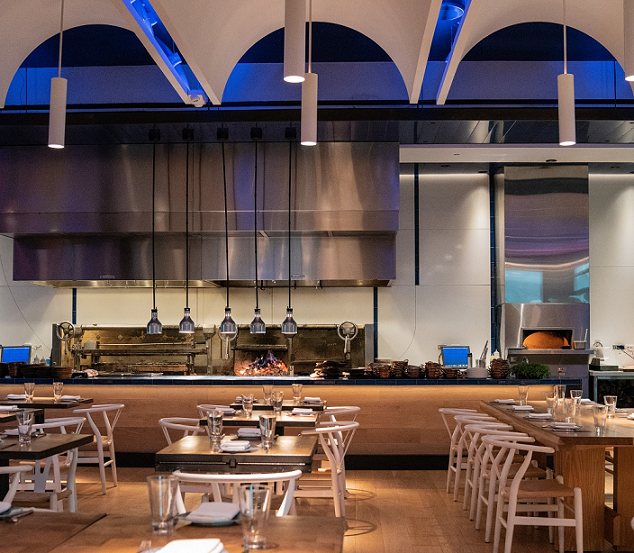 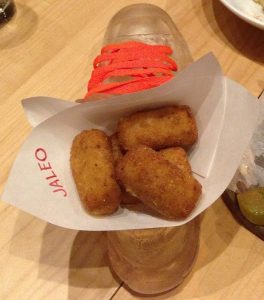 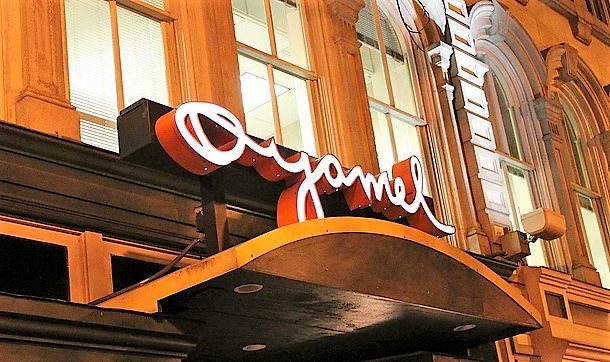 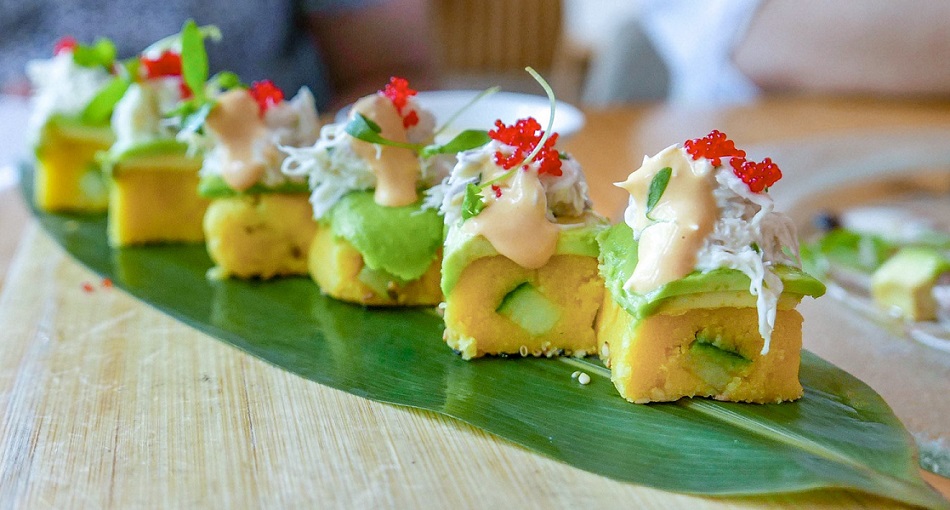 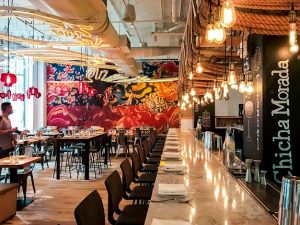 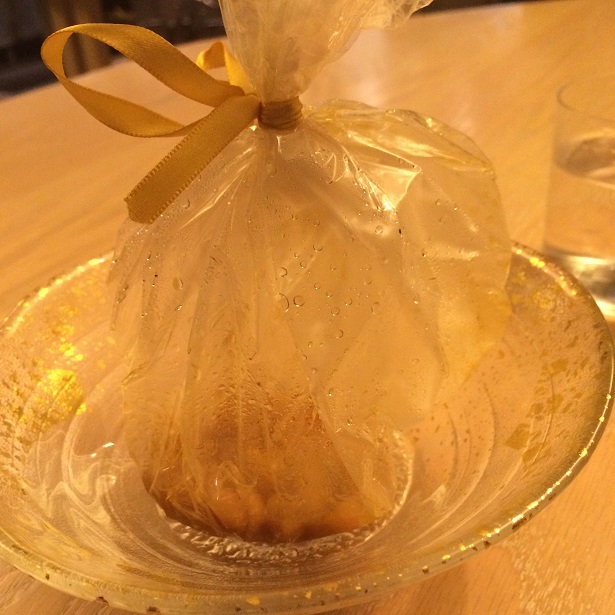 Beech mushroom with truffle en papillote at the 2-star Michelin Minibar/kowarski, CC By2.0 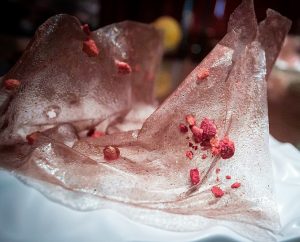 Cocoa paper with dried strawberry at e by José Andrés/City Foodsters, CC By2.0 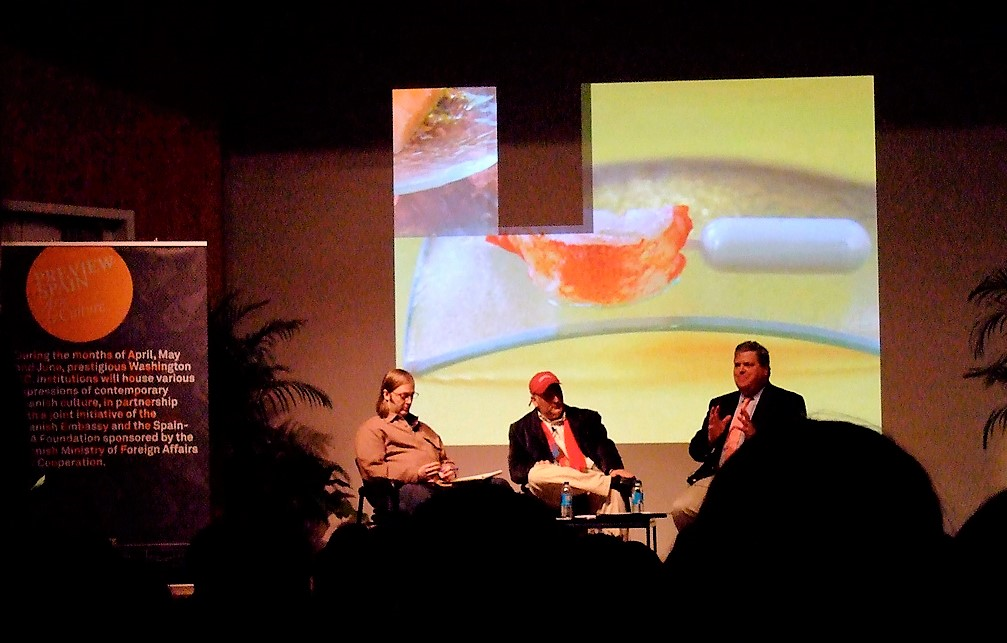 A “Spanish Vanguard Cuisine” lecture at the Smithsonian, Washington DC, preview of Spain Arts & Culture event sponsored by the Spain-USA Foundation. José Andrés is in the center/yosoynuts, CC BY-ND2.0 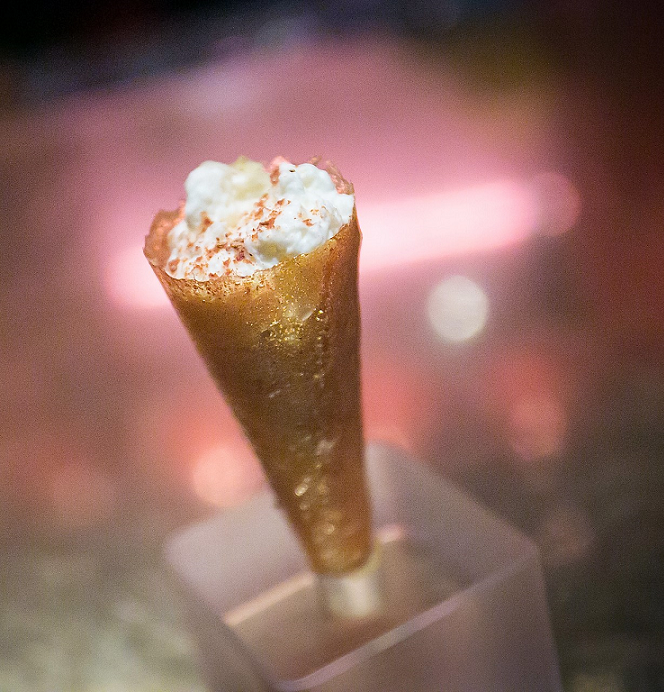 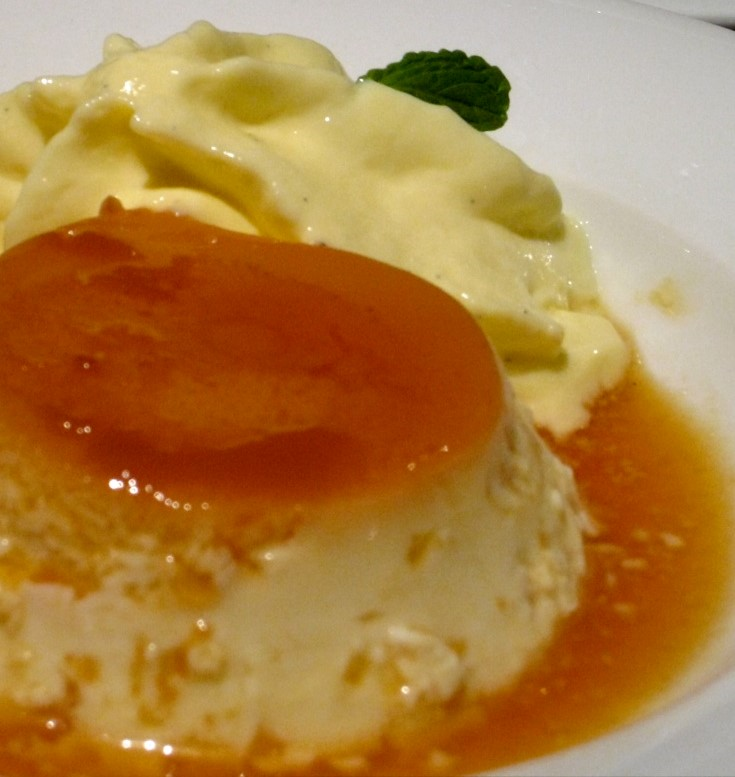 Traditional Spanish flan at The Bazaar/Tannaz via Flickr, CC BY-SA2.0 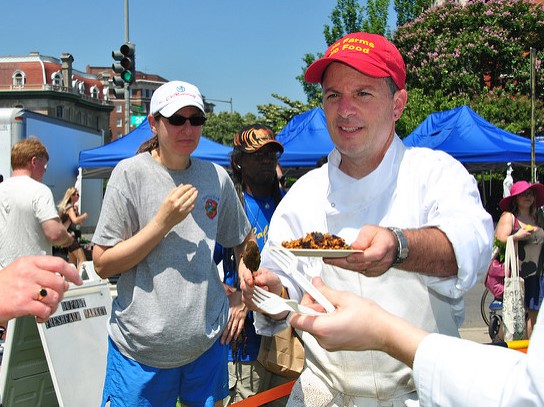 Fabulous paella. There’s such a thing as free lunch!/angela n. via Flickr, CC BY2.0 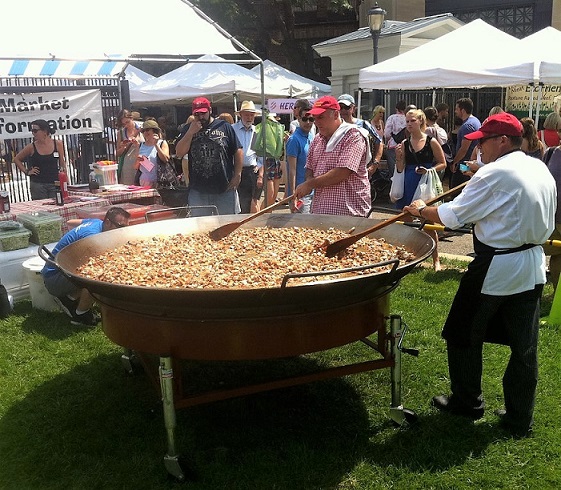 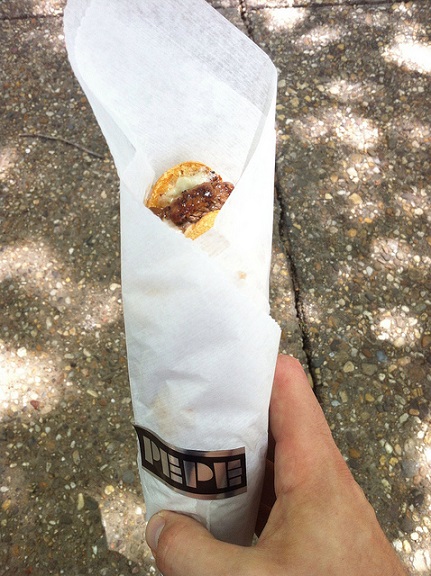 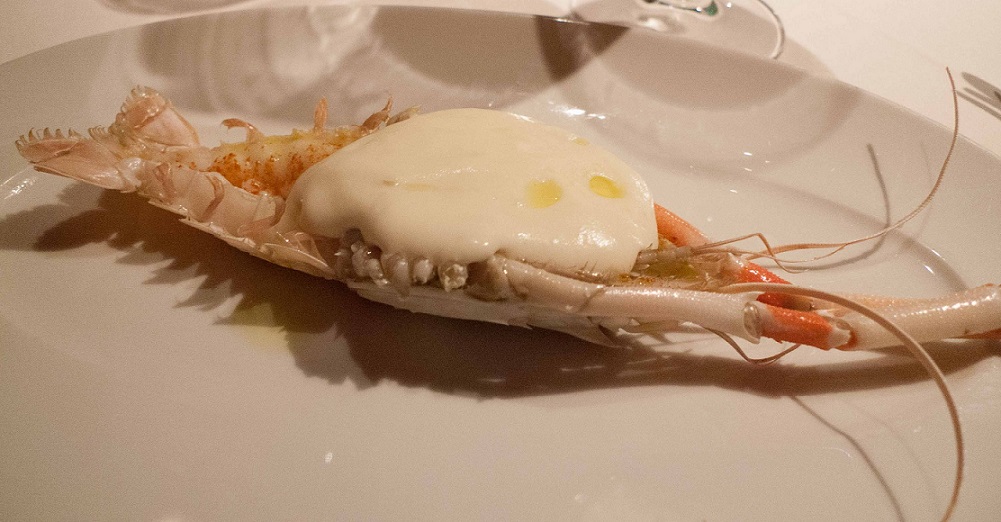 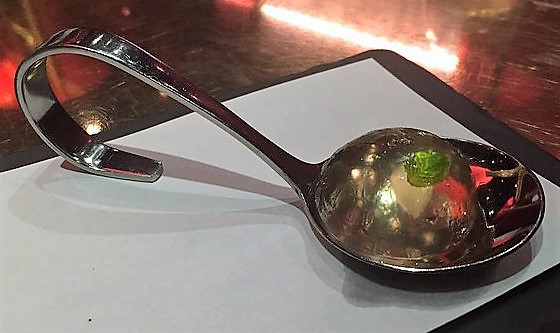 Chupito at e by José Andrés/s-velasco via Flickr, CC BY-ND2.0 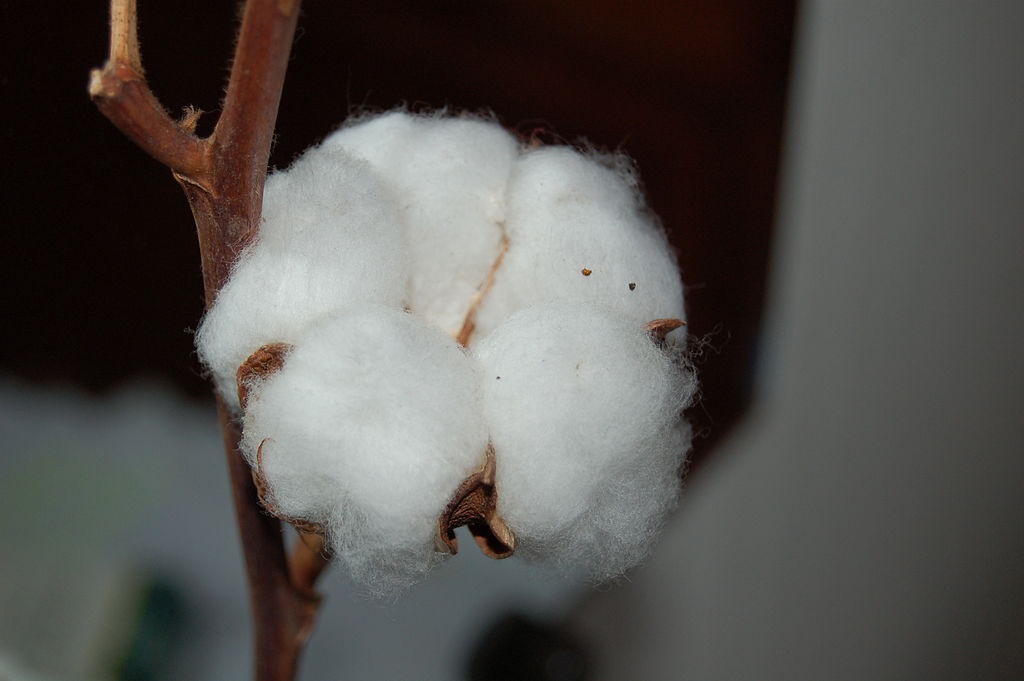