INDITEX BACK TO BACK (1) 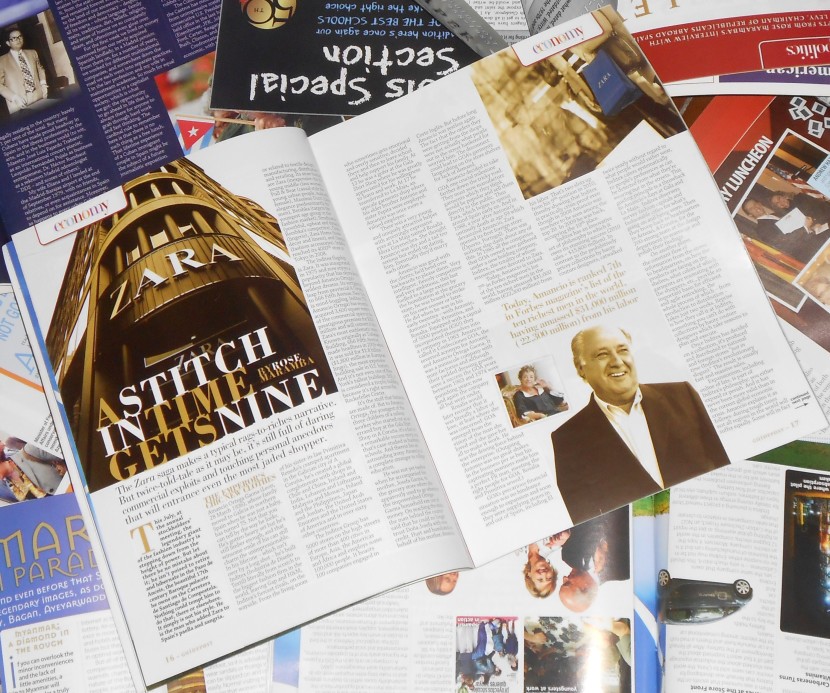 Editor’s Note: “Inditex Back to Back (1 & 2)” has been put together by GUIDEPOST to honor two individuals who were once so desperately poor but made it to the list of the world’s richest and most powerful through sheer hard work, unshakeable faith in their product, and the will to succeed.
“Back to Back” is the marvelous story of Inditex founders Amancio Ortega and Rosalía Mera who passed on recently.

A STITCH IN TIME GETS NINE

An abridged reprint from the Spring-Summer 2011 GUIDEPOST issue

This July, at the annual shareholders’ meeting, the legendary mogul of the fashion industry is stepping down from power. But he isn’t retiring to hibernate in the Pazo de Anceis, the beautiful 17th century Baroque palacete he owns along the Carretera de Santiago de Compostela. Nothing can tempt him to do that, there or elsewhere. It simply is not his style. He is the man who perked up Spain’s soggy old paella and sangria with chic and zesty Zara. He is the Amancio of Inditex.

Amancio Ortega Gaona (Leon, 28 March 1936), whose family moved to Galicia in northern Spain when he was just a baby, has turned 75. Not that you can tell by his looks. He’s grown heavy-set but is still limber and that winsome smile of his can still charm even the most jaded birds off the trees. In his lifetime he’s built Inditex (Industria de Diseño Textil) literally from scratch to the biggest fashion firm in the world, making second-raters out of Gap and H&M, Inditex’s fiercest rivals. From the living room of his sister-in-law Primitiva Renedo’s cramped apartment in the Galician city of A Coruña, he’s created a global conglomerate with shops in Chile and China, Ireland and India, Lebanon and Lithuania, Malaysia and Monaco, Poland and the Philippines, Japan and Jordan, and in over sixty other countries.

Zara is Indetex’s flagship. It was inaugurated in 1975 and now enjoys a popularity that has skyrocketed beyond Amancio Ortega’s wildest dreams and in record time too. Inditex (70% Amancio Ortega) has recently acquired 3,600 square meters of prestigious premises on 666 Fifth Avenue for $324 million and will convert it into Zara’s most emblematic store.

Known originally as Tishman Building, 666 Fifth Avenue made headlines in 2009 when it was sold for $1.8 billion (€1,800 million in European lingo), the most expensive sale of a building in US history. It isn’t one of New York’s tallest buildings but is considered a trophy building because it’s right across the Rockefeller Center.

It’s the stuff that fantasies are made of. But to Amancio Ortega, the youngest of the three children of a railway worker who at age 13 started out as a much appreciated errand boy at the Gala Shirt Shop in A Coruña, it’s a fact of a stunning success story.

He was not yet 12 when he accompanied his mother Josefa Gaona to the grocery store where she went whenever the impoverished Ortega-Gaona household ran out of money. This time, however, Doña Josefa was told she wasn’t being extended new credit. Hurt and humiliated on behalf of his mother, Amancio, who still gets emotional and overly sensitive sometimes, vowed there and then to leave school and help support his family.

From Gala he moved to La Maja when he was 17, an upscale garments shop where his elder brother Antonio and sister Pepita were employed. There he met a very young and uniquely attractive help with arrestingly expressive eyes named Rosalía Mera Goyenechea, a Galician from the wrong side of the tracks. She thought Amancio, who was several years her senior, shy and a tad too serious but she ended up dating him. Eventually they would marry each other.

Very intelligent, fiercely competitive and very ambitious he was bound to strike out on his own sooner or later. He did when he was in his early twenties – with Antonio, Antonio’s wife Primitiva, and Rosalía. With a capital of 5000 pesetas (€30 !) they incorporated themselves into a company in 1963. It was to be the forerunner of Inditex. Amancio called it Confecciones GOA, the reversed acronym for Antonio and Amancio Ortega Gaona. It was a miniscule company with mini-factories and although their padded dressing gowns were a commercial success the period between 1963 and 1974 were punishing years; now and again the company verged on bankruptcy.

Rosalía would later recount that it was a labor of love on her part: GOA was the result of the vision of the man she loved and she gave her all to help make it work. He was the driving force behind the enterprise. (Outgoing Antonio as entrepreneur was no great shakes but his captivating manners made him a perfect PR man for GOA. Rosalía and Primitiva sewed.)

GOA’s precarious financial situation was no hindrance to expansion and soon they were supplying stores in and out of Spain, including El Corte Inglés. But before long Amancio was restless again. It worried him that the orders they were getting from the stores weren’t actually what people in the streets really liked. The disconnect could lead to GOA’s garments languishing on the shelves.

Amancio decided to take GOA one crucial milestone farther down the tricky road. They must now manufacture garments which they think would be popular with shoppers and sell these garments directly to them. This was how Zara sprouted around Spain. And in 1988, a year after Antonio’s untimely death at age 59 which devastated Amancio, Zara opened its first foreign store (Oporto, Portugal).

The Philosophy of It

Today, Amancio is ranked 7th in Forbes magazine’s list of the ten richest men in the world with an estimated net worth of $31,000 million (€22,300 million).

Inditex has an innovative set of philosophy which has propelled it to spectacular success (2010 sales = 15,800 million). In contrast to the prohibitively pricey collection by haute couture designers, catwalked twice yearly without regard to what people really want to wear, Inditex caters to people’s preferences as can be detected from what they’re wearing out in the streets.

On a parallel plane, the constant flow of information from the Inditex stores to the headquarters in Arteixo, A Coruña, on how the products are faring on the shelves, what colors of which garments are resonating with the shoppers, etc. provide an important basis for agile restocking. The whole process, from production to distribution, takes just two weeks. The result is fast and massive sales.

Expansionism, including online of late, is another crucial part of Inditex’s philosophy; you either expand or perish, more so in the current global economic crisis. Amancio explains it this way: during tough times not all regions in the world will suffer equally. Some will in fact provide companies opportunity for growth. Not surprisingly the current crisis is seeing Inditex expanding boldly in the emerging markets !

After 20 years of marriage, Amancio and Rosalía split up (1986). They had two children, Sandra, the elder, and Marcos. One might venture to suggest that the incredibly long and grinding hours the couple put in at GOA had caught up with them. Amancio readily admits that his company is his life. And he demands as much commitment from the people who work with him. Rosalía took Sandra, a healthy baby, with her to work. But when their son Marcos was born disabled by cerebral paralysis Rosalía decided that he would have first call on her time.

Not that Amancio was an uncaring father. Still, Rosalía’s decision presumably put an added strain on the marriage.

Upon her divorce Rosalía went back to school, having dropped out when she was 11 years old. She would earn a degree in magisterio (Education) not because she needed it for stable source of income; by then she was wealthy. It was for intellectual fulfillment.

Amancio always thought of Inditex as a family business. But there came a time when he had to go public to insure its future. When Inditex was first traded in May 2001 Rosalía owned 7% of the stock which she is keeping, making her the company’s second biggest shareholder. She, reportedly, also got $600 million in cash which she invested in various businesses among which was Zeltia, a company which seeks cancer treatment with compounds from the sea.

No wonder Rosalía is Spain’s richest woman and the 254th richest person in the world, with $4,200 million to her name.

In love she’s not been as lucky.

For some time now Amancio is happily married to Flora Pérez, a former Inditex employee and mother of Marta, Ortega’s second daughter and presumed to be his heir. As such she’s being groomed for presidency at Inditex. (Her elder step-sister Sandra occupies key posts at Rosalía’s own holding company Rosp Corunna, none at Inditex.)

Amancio is stepping down from the chairmanship of Inditex. He will be succeeded by Pablo Isla at the shareholders’ meeting in July. Isla, who is currently Deputy Chairman and CEO, is a brilliant and audacious business strategist like the founder of Inditex himself. But the founder will remain on the board and when needed it is more than likely that he will not hesitate to bring his entire stake to bear.

He would presumably have wanted Marta to have eased herself into the presidency by now. In fact people in Galicia thought she was going to step into her father’s shoes; Isla would be CEO but at the same time he would only be vice president. Apparently, however, Marta is reticent to take up the mammoth job and Amancio has relented – for the moment. He says she’s young yet. She’s only 27.

Marta started at the bottom of the corporate ladder. She did a stint as a salesgirl at a Bershka store in London. She’s also trained in Paris, Barcelona and Shanghai. Now she’s in Arteixo, right bang in the nerve center of Inditex.

Not that it’s all work and no play for the golden heiress. She’s spotted often enough with accomplished rider boyfriend Sergio Alvarez Moya on the international horse jumping circuits, not least the Centro Hipico Casas Novas, said to have been constructed to indulge dad and his daughters’ love for the equestrian sport.

Amancio Ortega is known to have said that if there’s one thing he regrets it is not having spent more time with his three children . . . 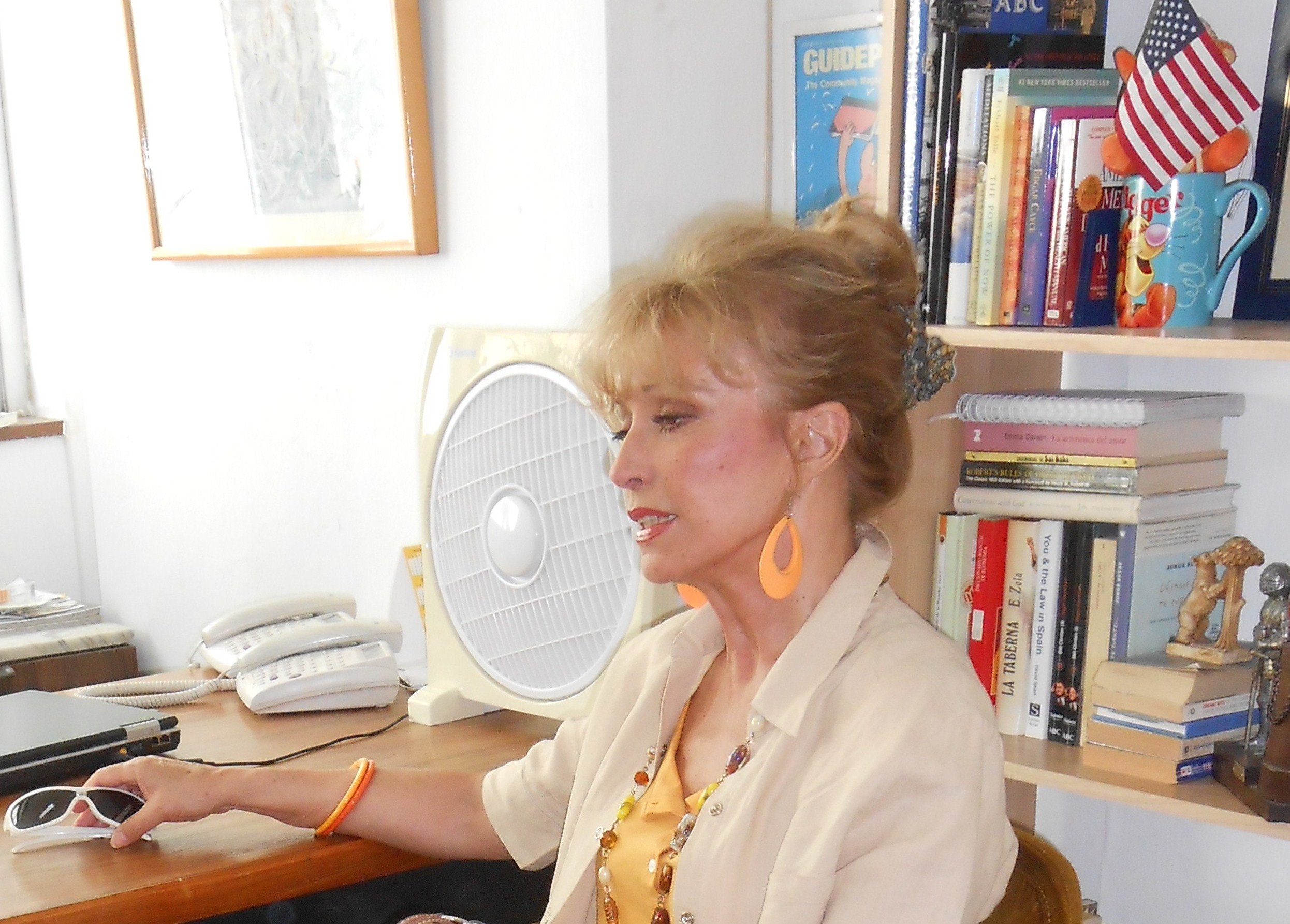 Previous article « CANDID CAMERA
Next article INDITEX BACK TO BACK (2) »