In Barcelona, Hope is Homeless Entrepreneur

We’re turning a tragedy into an opportunity. We’re bringing everyone in… It’s all about
helping people grow and redistributing the wealth properly so we
can solve the problems that currently exist.”

The coronavirus pandemic is very much still there. Though there is now an easing of  confinement, nation-wide lockdowns and stay-at-home orders in countries around the world are still the rule. But what do you do if you don’t have a home?

Homeless people are one of the most vulnerable groups affected by the coronavirus.

“This is a community of people who don’t have easy access to health care…as well as not having access to hygiene facilities,” says Megan Hustings, the managing director of the National Coalition for the Homeless, in an interview with Newsweek last March.

Corona Compels Us to Care about Homelessness

The coronavirus has exposed the healthcare systems’ limited resources around the world. Not only can a sick homeless person spread the virus, but a major outbreak among the homeless population could further overwhelm our already inundated hospitals.

President of the Barcelona-based charity Homeless Entrepreneur (HE), Andrew Funk, says that the coronavirus “puts us into an extreme situation where we have to respond. We can’t ignore it. With the homeless, previously no one cared too much, but now a homeless person can get you sick and you can die. . . We’re more conscious and we want to make sure that everyone is healthier and better because that directly affects us.”

A Government’s response in Barcelona

While Madrid’s IFEMA convention center turned into hospital and homeless shelter as an emergency measure, Barcelona similarly transformed Hall 7 at La Fira’s Montjuic venue into a shelter “for people in [a] vulnerable situation during the health alert,” per the Fira website.

There are more than 4,200 homeless people in Barcelona, reckons Arrels Foundation, a Barcelona charity that serves the homeless. Even though a percentage of Barcelona’s homeless can stay in a shelter like La Fira, Funk still sees many people living on the street. According to the HE president, those on the street are mostly told not to move around much.

Funk describes the government’s response to the homeless problem as “slow and inefficient… because they came up with one solution which is pretty much putting them in big buildings. . .I think it’s very short-sighted and probably just because people weren’t prepared for that kind of response. And when they do, they’re just thinking about a hundred percent assistance…They’re not really thinking about tomorrow and I fear that once the general crisis is over, they’re just going to throw people back in the street.” 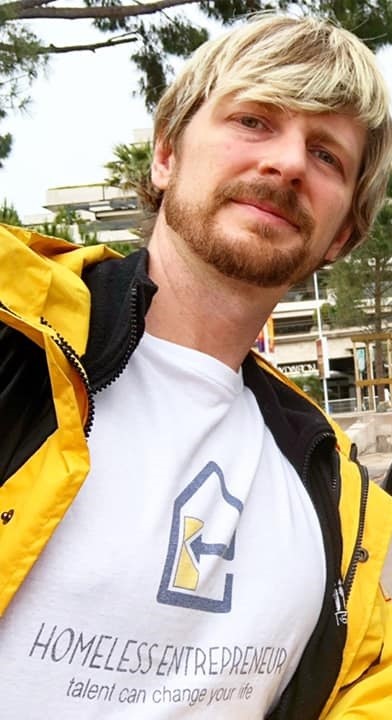 “Talent can save your life.”

Funk thinks that “that’s the biggest flaw that’s going on, but we’re trying to turn the liability into an asset. We’re trying to take this time and this space to actually give people an opportunity to go forward, not backwards afterwards.”

For HE, going forwards means focusing on long-term solutions that keep the homeless people off the streets for good. That is the company’s goal and hope.

What More Can Spain Do

Funk and I talked about how Spain could improve the plight of the homeless population in the health crisis. Overall, Funk thinks that citizens should get involved in any way they can. He also believes we can make better use of vacant spaces, such as hotels and hostels.

One problem with bigger shelter spaces is that fights and robberies often occur. It’s also where diseases can spread more quickly. “Smaller spaces,” Funk said, “would reduce possible contagion and also conflicts among those staying there. . .It’s all about turning a liability into assets. Who has the biggest problem now and how can you turn their space into a positive area? I think hostels can do that.”

HostelWorld, the online hostel booking platform, registers 5,468 hostels in 933 cities around Europe and 420 hostels in 90 cities throughout Spain. If these hostels are available, they could shelter the remaining homeless living on the streets in Barcelona, as well as, in other cities.

Once they have a place to stay, going above and beyond for HE means helping the homeless solve their problems tomorrow so that they can improve their situation in the long-run, and not return to streets once the crisis ends. 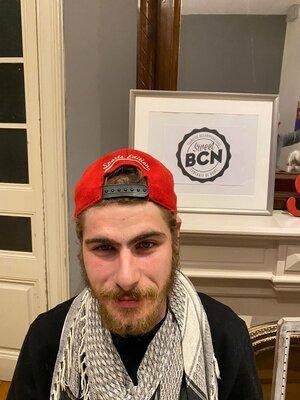 “Once Comfort BCN becomes a social hostel they will exclusively provide beds to homeless entrepreneurs–no longer selling beds to tourists.”

In response to the crisis, HE started a project called ‘Homeless Hostels Work.’ The project includes an agreement with a hostel called Comfort BCN that has donated its space for eighteen homeless people to stay until it becomes a “social hostel”.

Once Comfort BCN becomes a social hostel they will exclusively provide beds to homeless entrepreneurs who are part of HE’s program–no longer selling beds to tourists. The future social hostel will run on a circular economy based on sustainable consumption, which means that those homeless entrepreneurs who stay at the hostel will add value to the community and receive support at the same time, according to Funk. “We started getting people into the hostel within 5 days of the confinement being announced.”

Each person in the hostel will be working on a product or service that they can sell, so that way they can raise funds for themselves and the hostel. For instance, there is Bob who is an American painter selling his own artwork. “I think people shine in moments of crisis,” Funk enthused.

The Homeless Entrepreneurs in the Hostel

HE focuses their work on people who don’t have serious substance or mental health issues. “The process of entering into the program did not change because of the coronavirus. The only difference is that we have a lot more candidates to deal with than before and we chose the ones that fit best with our program,” Funk points out.

The eighteen homeless entrepreneurs (16 men, 2 women) staying in the hostel are going through HE’s apprenticeship program (see  “THE PURSUIT OF ‘HAPPYNESS’ IN BARCELONA”).

“Everything is being done online right now,” Funk says. “They’re using Zoom to do training and preparation and dealing with counselors and all of the volunteers. They’ve been doing yoga classes and exercise for 30 minutes a day. And it’s just using the space and making sure they go through the program in that area without going anywhere else.

“When you have people in that space, people should be thinking about how to solve their problem tomorrow, which is do they have the right resources to grow? And to try to find ways to work and get paid and have income so that way they can pay for rent and improve their situation.” 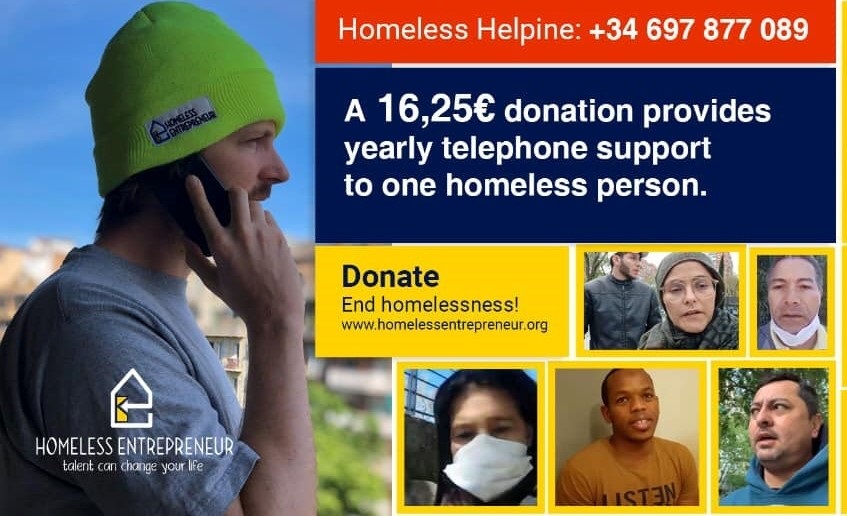 An HE coordinator interviewed and selected the first 18 people eligible for the hostel through their new COVID-19 international helpline. Just call +34 697 87 70 89 on Whatsapp to connect with the helpline.

It’s a telephone number that homeless individuals can call to ask for guidance and support. In addition, it’s an opportunity for people to share their story. Many of these stories can be seen on the HE’s Twitter. 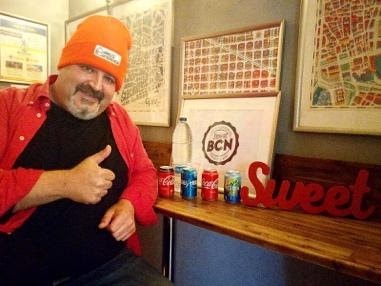 Felix poses with some of the drinks from Coca-Cola at the BCN hostel.

“In the long history of humankind (and animalkind, too),” said Charles Darwin. “Those who learned to collaborate and improvise most effectively have prevailed.” Despite stay-at-home and social-distancing orders, Homeless Entrepreneur is adapting to the pandemic through collaborating with others. For instance, in addition to Comfort BCN’s hostel, HE has recently teamed up with Coca Cola. Coca Cola’s collaboration entails a donation of about 2000 liters of beverages per month to the entrepreneurs staying at the hostel.

“We’re turning a tragedy into an opportunity” Funk claims. “We’re bringing everyone in… It’s all about helping people grow and redistributing the wealth properly so we can solve the problems that currently exist.”

As for the combined thirty-three homeless entrepreneurs who are actively involved with HE’s apprenticeship program, “they all understand that it’s a hard situation,” Funk says. “Some are volunteering for Red Cross. Some are volunteering with us. Everyone is responding in a positive way. . . Everybody is using our network in one way or another.” 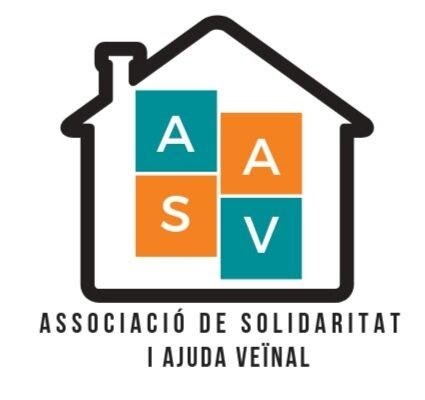 There’s still a chance to donate. The profiles are running a crowd funding for each person in the program where you can see when people donate, how much has been raised and how the individual is advancing, according to Funk. Click the tab ‘Our Homeless Entrepreneurs’ on HE’s website for the profiles of people in HE’s program.

How we can support the homeless population during COVID-19

Funk continued, “Objectively, I would say, speak with a trusted organization that’s helping homeless people and ask how you could provide value and give them a hand. Try to understand what organizations are doing in your community and ask them what you could do to help.” 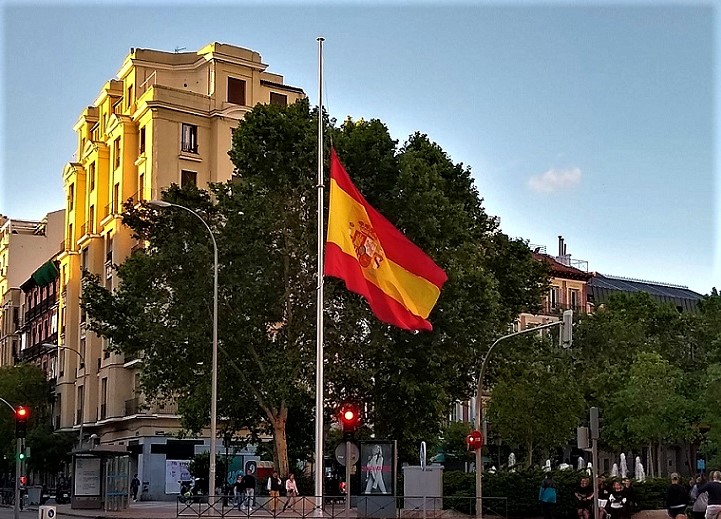 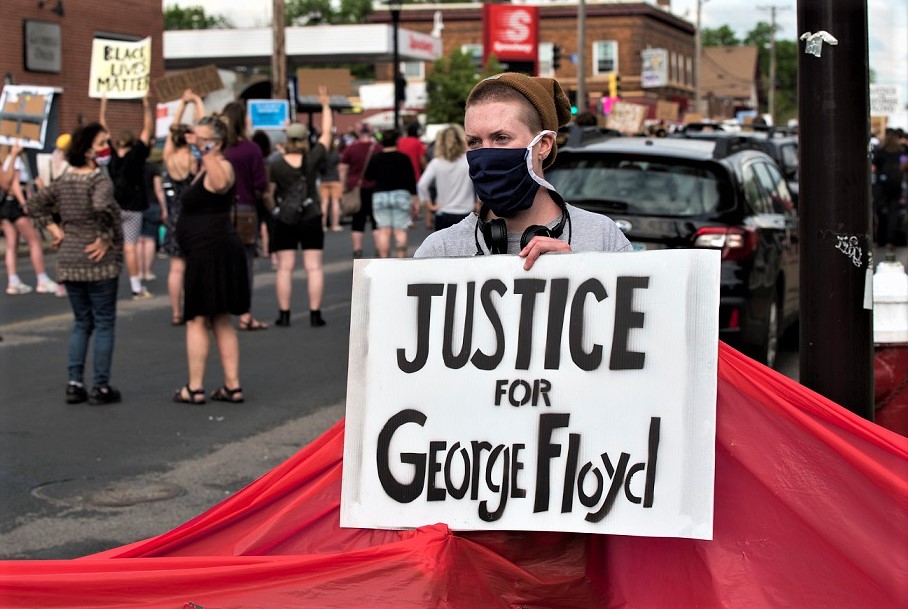