IMMIGRATION IN THESE CRITICAL TIMES 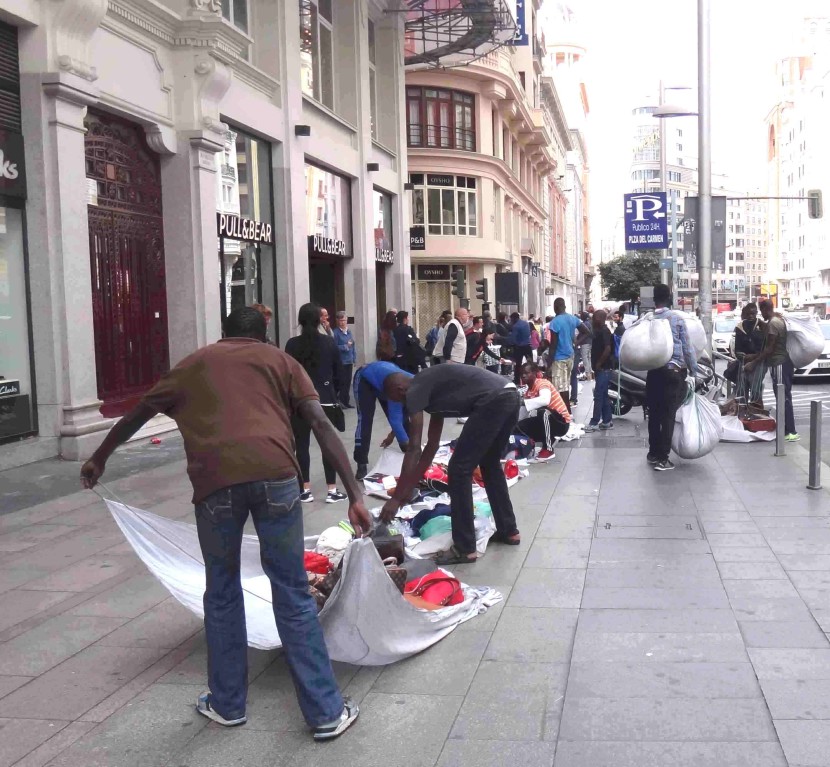 At the end of the day, I believe that immigrants are responsible for the path
they choose to take. Being an “immigrant” does not spare a
person the high cost of achieving his
goals and should not shun it

Immigration anywhere in the world, and since the beginning of time, has always been a contentious issue. Spain is no exception, occupied as far back as the 9th century BC by the Celts, Lusithanians, Tartessian, Phoenicians, Carthaginians and Greeks in wave after wave of immigration.

Fast forward to the present: by some indications, the issue of immigration in Spain is coming to a head. According to the Instituto Nacional de Estadística (National Institute of Statistics) there are 4,676,022 foreign nationals in the country in 2014, or 7.8% of the population, not counting in the undocumented illegal immigrants. 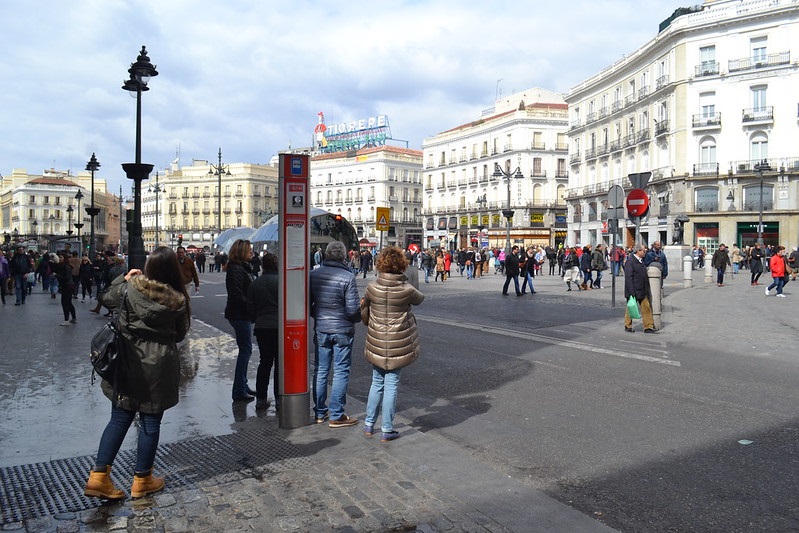 The Puerta del Sol, in the very heart of the nation’s capital, is a favorite hangout of immigrants and native Spaniards alike. (Photo: Daniel — https://www.flickr.com/photos/57511216@N04/ — CC BY2.0)

Against this backdrop, I can understand the local sentiments towards the foreigners flocking to the country. Back home in Malaysia there are approximately 6.7 million immigrants (a whopping 18% of the entire population) from various Asian countries coming to work and their number increases by the year.

Recently, I had interviewed Carlos (fictitious name), an ambitious middle-class Spanish in his early 30s who has founded several successful businesses and is now a budding entrepreneur. At the same time he holds a job in a local 4 star hotel. “The country is in an economic crisis,” he told me. “We have millions of young people who are out of job. I love Madrid and I could not imagine working elsewhere. And yet 20% of young Spanish people have no jobs and on top of that there is the high rate of immigration into the country. Of course historically the Iberian Peninsula is a place with a mix of people but given the situation today I would like to see the Spanish government focusing on doing more for us citizens instead of receiving another influx of immigrants. I mean, before saving the world we need to save ourselves. What’s wrong with that?” 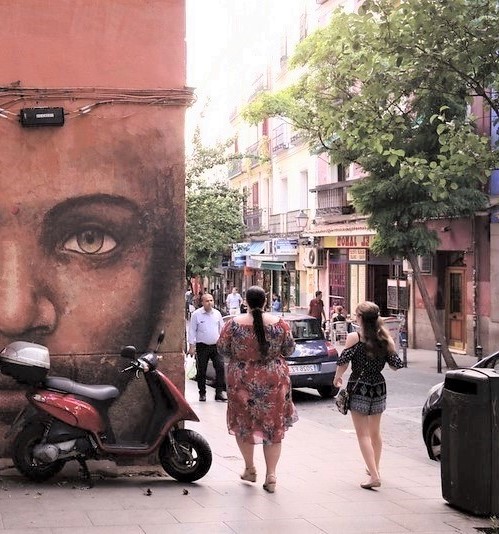 Though Spain and Malaysia are not comparable to each other politically, socially or economically they have this one thing in common: both are receptor countries of peoples searching for a better life abroad.

“A better life” could be quite a subjective concept.  We often hear that Spain is a favorite destination for foreigners largely, though not solely, because of its fantastic climate, high standard of living and its superb culture. I myself, who happens to be a frequent traveler, see these attributes as setting Spain apart from the other European countries. However, it is widely accepted, especially in the immigrant’s lingo, that “a better life” often means better economic opportunities.

Spain has become a hotbed of Latin American immigration. Spain and Latin America share the same language and religion and are bound to each other by close historical and cultural ties. But the strongest factor for the Hispanic immigration is economic.

Some immigrants, especially those from Africa, make their living selling counterfeit goods on sidewalks. (See above photo and the featured image.) So far, no Spaniard would be caught dead in this “profession”

Let us talk about the implications of being an immigrant. Immigrants were once citizens of their birth countries. But when they move permanently to foreign shores and become responsible immigrants, they contribute to the nation-building of their adopted countries, playing an active part especially in economic developments. Immigrants tend to work harder and would take up jobs that the native citizens won’t.

Do lowly jobs make the immigrant a lesser person? Of course not. For the responsible person, immigration can be very empowering. There are abundant resources in his adopted country that he can tap even if he will likely have to work twice as hard as the natives and over the long haul too, perhaps from one generation to the next. There could be many opportunities to harness his potentials and, eventually, attain economic prosperity.

The ultimate result could well be a mutual enrichment of the immigrant and the receptor country.

Given such a prospect, natives, governments and immigrants must look at the issue with an open mind. I am a native citizen of Malaysia and, sadly, have seen how the poor treatment of immigrants is tolerated to a certain extent. Generally, the immigrants in Malaysia are upright, hard-working, and highly responsible, but receive low wages. Yet, the Malaysian media make it out as though thugs have invaded us. I do not think the situation is exactly the same in Spain; still, it is true that even in this country the immigrants and the native citizens are not treated equally. 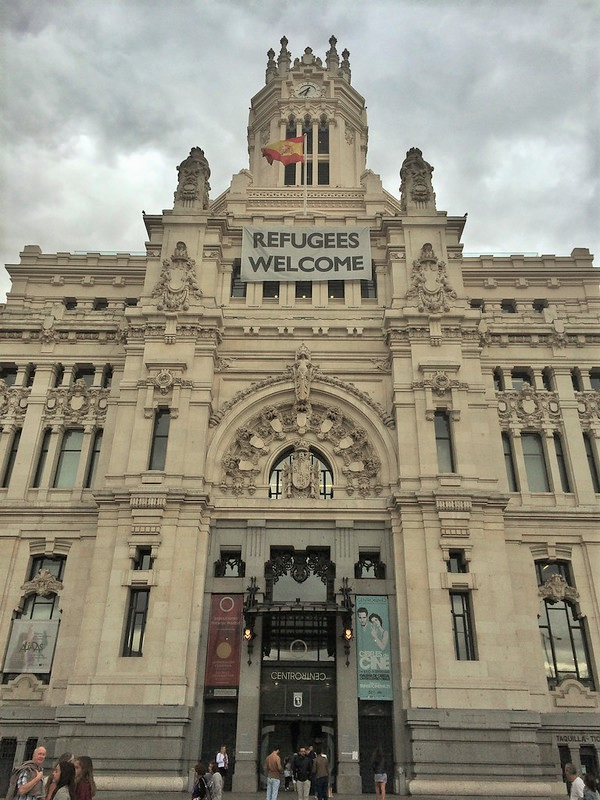 Though the Spanish government must grapple with the fact that the awfully high unemployment rate in the country precludes massive refugee inflows, the humane sentiments of warmhearted Spaniards are reflected in the huge banner atop Madrid’s City Hall. Others say it’s all pure demagoguery (Photo: Su-May via Flickr, CC BY2.0)

Governments are crucial as mediators between the natives and the immigrants, which is not an easy role. Maintaining a cohesive society where there is a sizeable immigrant presence usually seen as unwelcome intrusion if not downright invasion could be a daunting task. Natives elect their government thinking it will protect them against outside threats – massive immigration, for example.

In the ongoing Middle Eastern refugee crisis, the central government of Spain is seen as being wary of opening the doors of the country to huge numbers of refugees; Spain is already saturated with nearly 5 million immigrants, not to mention the awfully high unemployment rate. The way I see it, the country will not be able to absorb more inflows, certainly not in the way Germany, France and Sweden are able to.

I believe that Spain is being rational in handling the crisis.

Moreover, at the end of the day, I believe that immigrants are responsible for the path they choose to take. They can be as successful as everyone else though “success” could, and does, mean differently to different individuals. Being an “immigrant” does not spare a person the high cost of achieving his goals and should not shun it.

Douglas, a Guidepost staff writer, is a Malaysian currently based in Madrid. He’s actually a geophysicist with a 5-year international working experience but then he is also a writer at heart! A self-avowed lover of Madrid, he first “met” the lovely Spanish capital in 2012 and fell head over heels so that he keeps coming back for more. His main interests are “anything related to the amazing city.” 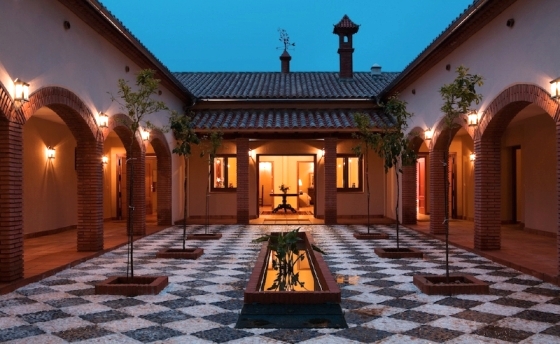 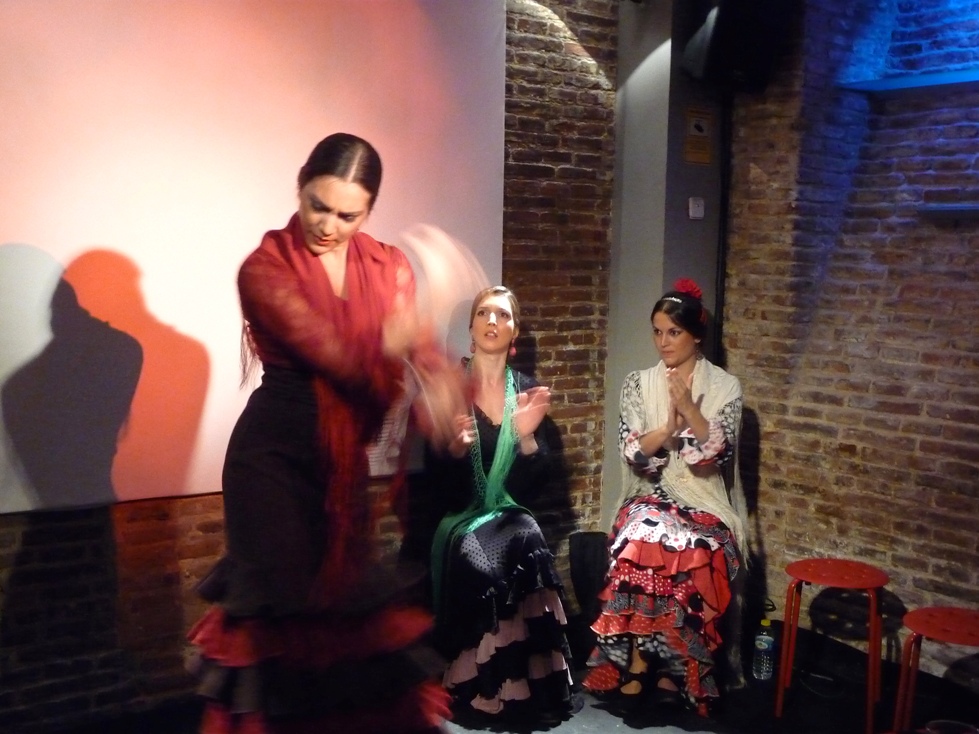 Next article Tablaos: Getting Back to Basics »