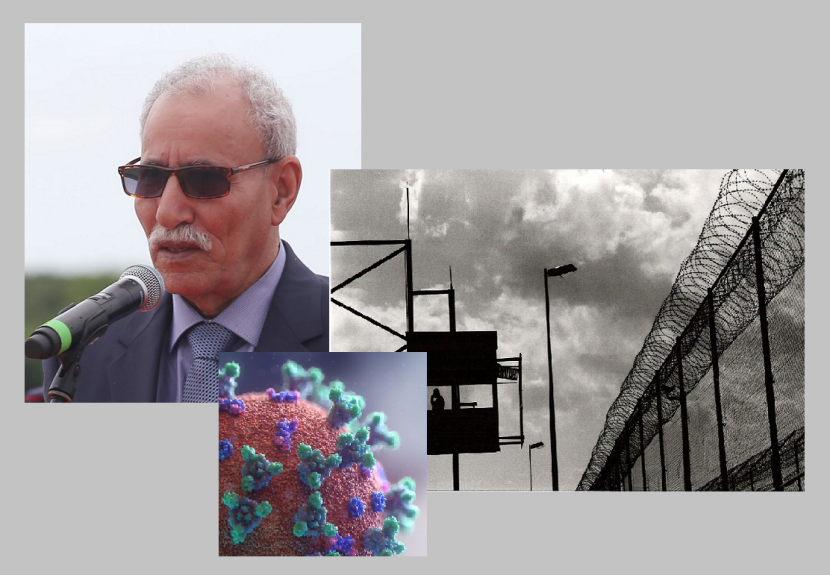 On Monday, 17 May 2021, Morocco opened the floodgates to a massive illegal migration into Ceuta, the Spanish exclave on the northern shores of Morocco’s Mediterranean coast. Spain watched stunned on TV as thousands of desperate, irregular immigrants, the vast majority of whom were Moroccan, walked over or swam across the Spanish-Moroccan border. In contrast, at the border fence in Ceuta’s sister city, Melilla, some 250 miles further south along the coast, the much fewer migrants were blocked by Spanish forces with the aid of Moroccan guards. Consequently, less than a hundred of them were able to reach the Spanish side of the fence. 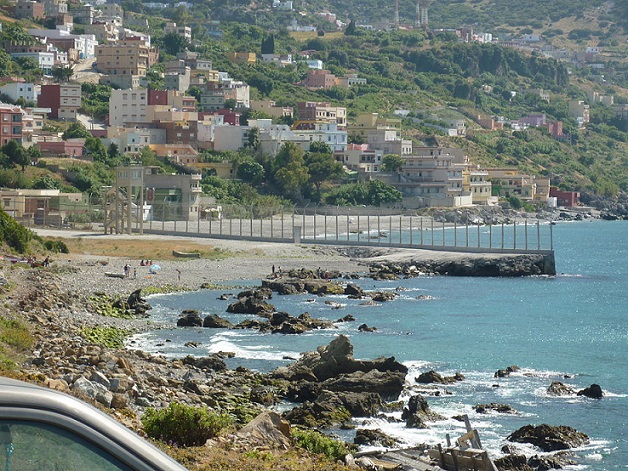 Ceuta border fence. With “benevolent” security forces looking the other way, illegal migrants could swim around or, at low tide, just walk to the Spanish side

In Ceuta, Moroccan security forces took their time firing tear gas to disperse a large crowd of migrants that had begun to gather at the border fence since midnight. Worse, there are videos showing Moroccan soldiers opening security gates to let migrants through to the Spanish port city.  Spain’s initial official estimate of the irregular migrants who had breached the fence was 6,000 people. But reporters on the ground say the number could be double and even the Spanish government has tacitly raised the cautious estimate.

The Moroccan offensive bulges with a history that utilizes impoverished people in the region as pawns in its dispute with Spain over the exclaves that have been under Spanish rule since the 17th century. Researcher Xavier Ferrer-Gallardo at the Universitat Autònoma de Barcelona states in “The Spanish-Moroccan Border Complex: Processes of Geopolitical, Functional and Symbolic Reordering” that the heavily fortified border fences of Ceuta and Melilla are built on “a complex amalgamation of clashes and alliances” between Spain and Morocco.

As the Spanish-Moroccan relations fluctuate between coexistence and confrontation, so the number of irregular migrants breaching the fences of Ceuta and Melilla goes down and up.

The flashpoint in recent years in the uneasy relations between the two kingdoms on either shore of the Mediterranean is Western Sahara 20% of whose territory is controlled by the Sahrawi Arab Democratic Republic proclaimed in 1976; the remaining 80% is occupied and administered by neighboring Morocco who wants all of Western Sahara for its own. 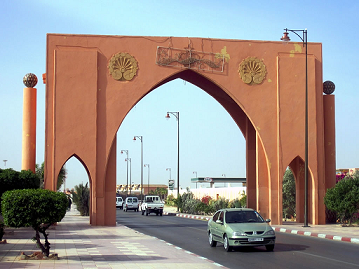 Monumental Arch near the airport at Laayoune, the capital of Saguía el Hamra, one of the two Spanish colonies that made up the old Spanish Sahara

Until 1976  Spain occupied Western Sahara, then

the Spanish Sahara (1884-1976). However, on divesting itself of the territory, the Spanish government promised the Sahrawis a referendum on the choice between independence and integration with Morocco. So far no referendum has taken place. Still, to this day, Spain is sticking to its position: a U.N.borkered referendum that Morocco refuses to contemplate.

Going back to Ceuta and Melilla: In 1993, to stop irregular migration Spain built a 2.5-meter (8.2-ft) high border fence along 8.4 km (5.2 mi) in its Ceuta exclave. (The fence in Melilla was first built in 1998.) But both fences proved too easy to breach. In 2005, the fence in Ceuta reached its current height of 6m (19 ft 8 in). Even then, the physical barrier has not curbed the need of desperate people to seek a better life on the other side. It seems what the fences do better is provide a reliable gauge of the ebb and flow of the Spanish-Moroccan relations. Morocco takes a passive stance on irregular migration, even encourages it, whenever it suits its purpose. Not surprisingly, it is a rare time indeed when nobody is trying to scale the border fences.

On 17 – 18 May 2021, migrants swam around the border fences that jut out into the sea or walked on to the adjoining beaches at low tide in both Ceuta and Melilla. When not these modes, they rowed over in inflatable rings and rubber dinghies. Moroccan police at the border fence in Ceuta condoned the migration, resulting in thousands, including some 1,500 minors, inundating Spain’s territory, a record number over a single day. 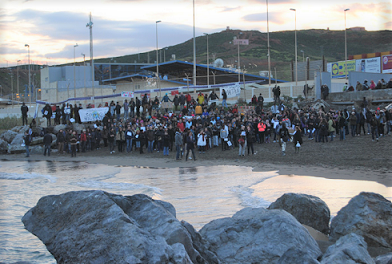 Tarajal Beach during an event (Marcha por la Dignidad) in 2015. During the May 2021 migration crisis, Ceuta’s border force at Tarajal is beefed up with extra police

On account of this incident, which rose to the magnitude of an international crisis, Spain has reinforced security at the borders. Armored vehicles and extra troops have been deployed on the beaches to help border police at Ceuta’s main entry point, Tarajal, and some 200 extra police assisted Ceuta’s normal 1,100-strong border force.

Some 7000 adult migrants have already been sent back to Morocco but none of the minors, in accordance with international immigration law regarding “unaccompanied children” (per the Convention on the Rights of the Child, a child is someone who is below 18 unless the law applicable to the child says the age of majority is attained earlier). 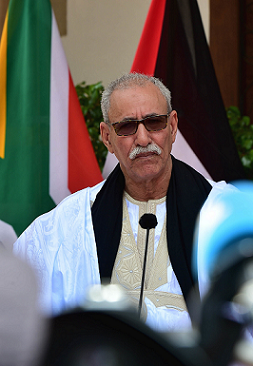 It is more than probable that the May 2021 massive infiltration of irregular migrants is directly related to renewed Spanish-Moroccan tension over Western Sahara. In April, Spain allowed Sahrawi President and General Secretary of the Polisario Front, Brahim Ghali, 73, to receive treatment for COVID-19 in a hospital in the northern Spanish city of Logroño. (Other reports say he is hospitalized in Madrid.) And without informing Morocco either. The Moroccan government, who took this as an act of provocation, responded angrily and warned Spain that there would be “consequences” for harboring Ghali. The makhzenian Moroccan digital newspaper, www.moroccoworldnews.com,  quotes an unnamed “Spanish political analyst” this Sunday, 23 May, as saying: “Spain provoked Morocco and ridiculed itself by opening its doors to Polisario leader Brahim Ghali.”

Morocco’s warning falls within the broader context of the Moroccan pressure to make Spain alter its policy toward Western Sahara. “What has happened in Ceuta is another example of how Morocco plays with migration as a manner to pursue its own interests. The EU should not give ground faced with this pressure,” Estrella Galan, director of the non-profit Spanish Commission to Aid Refugees, told Voice of America. 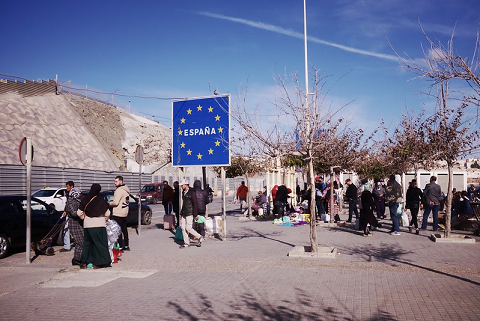 Ceuta. See the EU official flag (12 gold stars on blue background) with “España” in the center

“This sudden arrival of irregular migrants is a serious crisis for Spain and Europe,” said Spanish Prime Minister Pedro Sanchez in a televised address to the nation before he helicoptered with Minister for Home Affairs, Fernando Grande Marlaska, to Ceuta and Melilla on Tuesday to contain the crisis literally on the spot. It must be noted that because the North African exclaves are an integral part of Spanish territory, they have become a part of the European Union since the time Spain joined what was then the European Economic Community on 1 January 1986, forming the EU’s only land borders with Africa.

Needless to say, Spain has the unconditional backing of the European Union in this conflict. 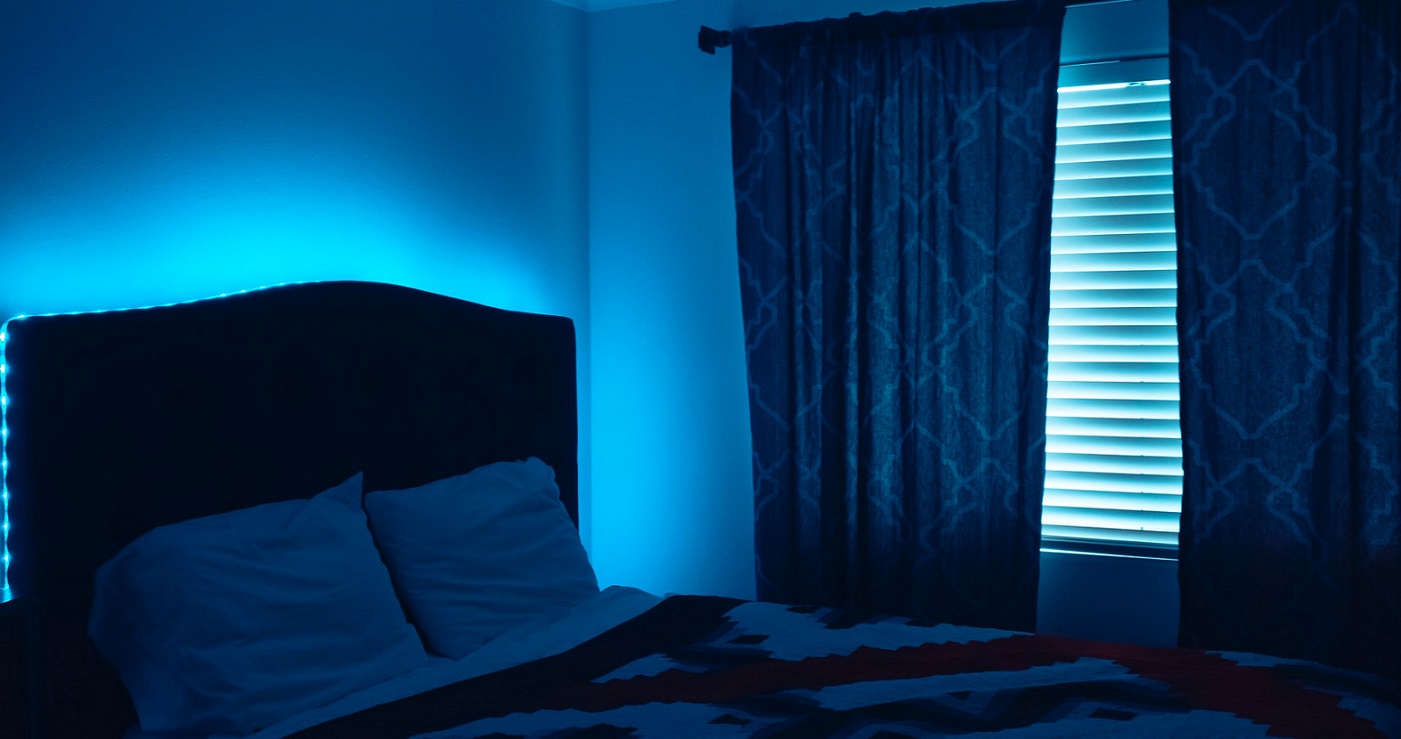