Legend has it that the origin of Khachapuri goes back to the ancient region of Laz near the Black Sea.
As a community of seamen, the boat-shaped bread honored their love of the sea. The egg, in the
middle of the pool of melted cheese, paid homage to their dream of capturing the sun

By Aidan Kim
Photos: A. Kim

For many, including myself, the small Caucasus country of Georgia—wedged between Russia and Turkey—is a distant and unfamiliar land. Certainly, I had no idea as to what the food or culture of Georgia was like before endeavoring to try the food of this country. Upon walking through the sliding glass doors of Khachapuri,  I was greeted by the warmth of hospitality and the brick oven-baked foods that constitute the rich culture of Georgia. That was quite an introduction. 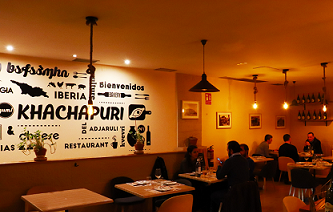 Hospitality is one of the defining ingredients of Georgian culture and is most vividly expressed at the dinner table. The Georgian tradition of the supra, or feast, is one of familial bonding fielded by the consumption of large quantities of rich breads, cheeses, and historically renowned wine.

Nikki, the owner of the first Georgian restaurant in Madrid, told me that opening Khachapuri was part of her desire to “show Europe and Spain the culture of Georgia.” Situated in the busy tourist sector off Gran Via, Nikki says they have been doing very well since opening in 2016, as most people that come to the restaurant are curious about the Georgian cuisine. 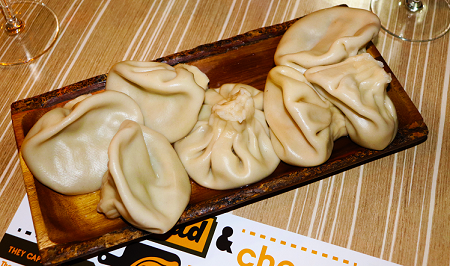 Khinkalis: these luscious dumplings are eaten with your hands. Watch out, there’s a ritual to it!

My first course was an emblematic Georgian soup dumpling called a khinkali. Warm dough is creased and filled with seasoned beef and pork along with broth to create a twisted plump pouch. It is considered impolite to eat with a fork and knife, as Nikki explained that it is customary to sprinkle some pepper on the dumpling and eat it with your hands by first biting into the dumpling’s soft dough and slurping out the warm savory broth before eating the rest of the dumpling.

In preparing this mouthwatering mass of steaming dough, uncooked meat is nestled inside the dumpling so in the process of cooking it the juices from the meat are released, creating, along with the broth inside, a delicious savory soup. Consuming five of these khinkalis warmed my soul and I was ready for my main dish.

In 1986, The Economist created the Big Mac index, which measures consumer purchasing power by comparing the price of buying a Big Mac in different countries. In Georgia, they have the “The Khachapuri Index,” which is meant to show national inflation by comparing the selling price of a khachapuri. Indeed, the namesake for this cozy Georgian restaurant is the national dish of Georgia. 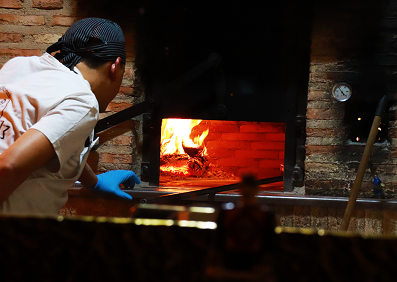 Brick oven and warm Georgian hospitality: they go together

Legend has it that the origin of Khachapuri goes back to the ancient region of Laz near the Black Sea. As a community of seamen, the boat-shaped bread honored their love of the sea. The egg, in the middle of the pool of melted cheese, paid homage to their dream of capturing the sun.

To make this decadent dish, unleavened puri bread is placed in a wood fire brick oven to rise and form into specific shapes as it is baked. The stringy sulguni cheese mixed with butter and fried bacon melt into a piquant pool of savory fondue. Once the cheese is melted an egg is cracked over the middle, emulating the old forlorn Georgian dream and creating a delicious mixture with which to dip the crispy bread.

The result of the intricate process is a dish that completely filled me with gastronomic pleasure. 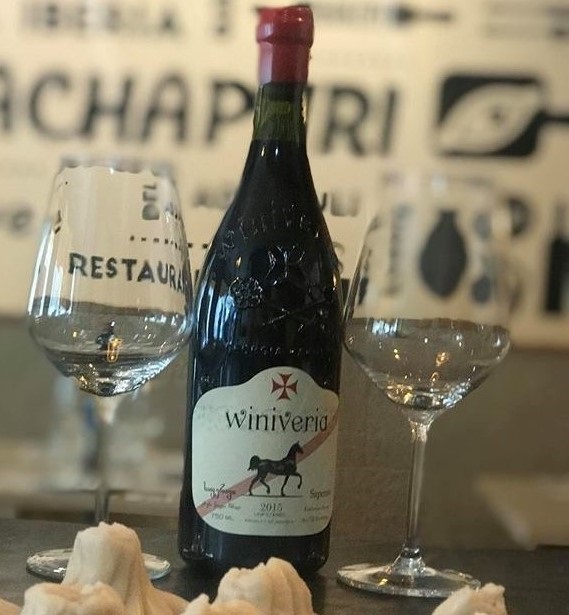 Behind the Georgian wine there’s an 8000-year old tradition

Besides warm bread and people, Georgia is also known for its rich history of wine-making. The fertile valleys of the Caucasus region have been home to grapevine cultivation for over 8000 years, boasting the oldest living evidence of wine production in the world. The tradition of winemaking is vital to the country and deeply entwined with the Georgian national identity. And you can tell why when you take a sip of some real Georgian wine.

I had a glass of 2014 Winiveria semi-sweet red wine to top off my supra. It was a full-bodied wine that left a sweet fruity finish on my tongue after each sip. Georgian wine tastes so unique and distinct because it is made with grapes native only to the region of Georgia. The wine is aged for several months buried underground in giant clay jars called qveris where it ferments and accumulates flavor. The result is nothing short of some of the best wines I have ever tasted and certainly some of the best wines in the world.

If you’ve never had Georgian cuisine and are in the mood for warm delicious comfort food at an honest price that you wouldn’t find on Yelp’s recommendations, you are in luck. Khachapuri is there for you. Find this warm cozy restaurant just two blocks away from the Gran Via metro and you will leave it with a full and happy stomach. 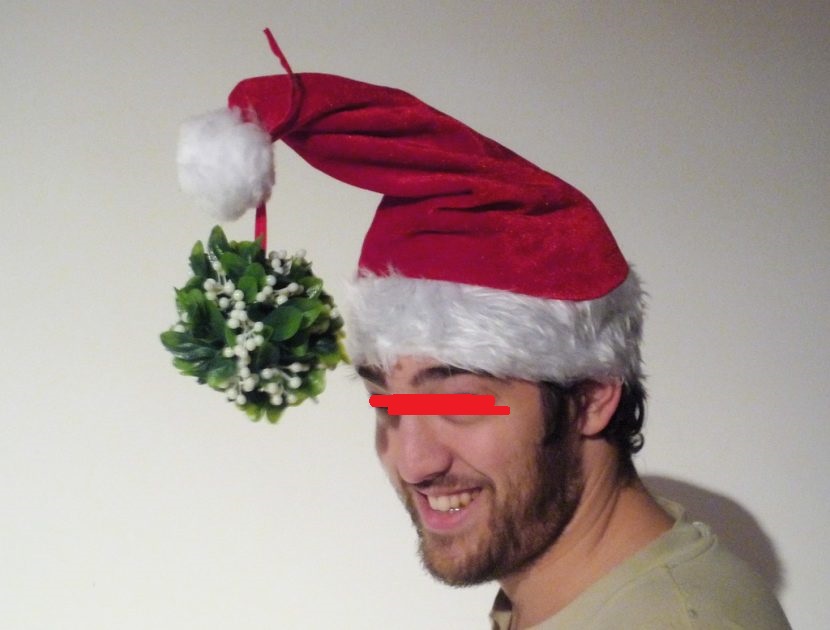