HER DINNER WTIH HITLER – And Her Ingenious Invention

Today, when you use your cell phone or, over the next few years, as you experience super-fast wireless Internet access you’ll be using an extension of the technology a 20-year-old actress first conceived while sitting at dinner with Hitler

It all started with a skin flick…

In 1933, a beautiful, young Austrian woman took off her clothes for a movie director. She ran through the woods… naked. She swam in a lake…naked. Pushing well beyond the social norms of the period, the movie also featured a simulated orgasm. To make the scene “vivid,” the director reportedly stabbed the actress with a sharp pin just off-screen.

The most popular movie in 1933 was King Kong. But everyone in Hollywood was talking about that scandalous movie with the gorgeous, young Austrian woman. Louis B. Mayer, of the giant studio MGM, said she was the most beautiful woman in the world. The film was banned practically everywhere… which of course made it even more popular and valuable. Mussolini reportedly refused to sell his copy at any price. 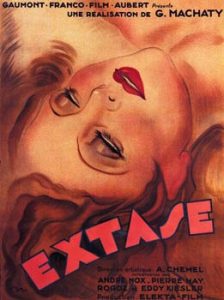 The star of the film, called Ecstasy, was Hedwig Kiesler. She said the secret of her beauty was “to stand there and look stupid.” In reality, Kiesler was anything but stupid. She was a genius. She’d grown up as the only child of a prominent Jewish banker. She was a math prodigy. She excelled at science. As she grew older, she became ruthless, using all the power her body and mind gave her.

Between the sexual roles she played, her tremendous beauty, and the power of her intellect, Kiesler would confound the men in her life…including her six husbands, two of the most ruthless dictators of the 20th century, and one of the greatest movie producers in history.

Her beauty made her rich for a time. She is said to have made – and spent – $30 million in her life. But her greatest accomplishment resulted from her intellect… and her invention continues to shape the world we live in today You see, this young Austrian starlet would take one of the most valuable technologies ever developed right from under Hitler’s nose. After fleeing to America, she not only became a major Hollywood star… her name sits on one of the most important patents ever granted by the U.S. Patent Office.

Today, when you use your cell phone or, over the next few years, as you experience super-fast wireless Internet access (via something called “long-term evolution” or “LTE” technology), you’ll be using an extension of the technology a 20-year-old actress first conceived while sitting at dinner with Hitler.

At the time she made Ecstasy, Kiesler was married to one of the richest men in Austria. Friedrich Mandl was Austria ‘s leading arms maker. His firm would become a key supplier to the Nazis.

Mandl used his beautiful young wife as a showpiece at important business dinners with representatives of the Austrian, Italian, and German fascist forces. One of Mandl’s favorite topics at these gatherings – which included meals with Hitler and Mussolini – was the technology surrounding radio-controlled missiles and torpedoes. Wireless weapons offered far greater ranges than the wire-controlled alternatives that prevailed at the time. Kiesler sat through these dinners “looking stupid,” while absorbing everything she heard…

As a Jew, Kiesler hated the Nazis. She abhorred her husband’s business ambitions. Mandl responded to his willful wife by imprisoning her in his castle, Schloss Schwarzenau. In 1937, she managed to escape. She drugged her maid, snuck out of the castle wearing the maid’s clothes, and sold her jewelry to finance a trip first to Paris and then to London .

(She got out just in time. In 1938, Germany annexed Austria. The Nazis seized Mandl’s factory. He was half Jewish. Mandl fled to Brazil . Later, he became an advisor to Argentina ‘s iconic populist president, Juan Peron.) 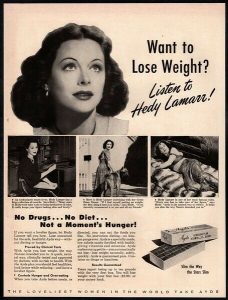 Ayds advertisement, 1952: Lamar did many things — great and small — including modelling for ads

In London , Kiesler arranged a meeting with Louis B. Mayer. She signed a long-term contract with him, becoming one of MGM’s biggest stars. She appeared in more than 20 films. She was a co-star to Clark Gable, Judy Garland, and even Bob Hope. Each of her first seven MGM movies was a blockbuster.

But Kiesler cared far more about fighting the Nazis than about making movies. At the height of her fame, in 1942, she developed a new kind of communications system, optimized for sending coded messages that couldn’t be “jammed.” She was building a system that would allow torpedoes and guided bombs to always reach their targets. She was building a system to kill Nazis.

By the 1940s, both the Nazis and the Allied forces were using the kind of single- frequency radio-controlled technology Kiesler’s ex-husband had been peddling. The drawback of this technology was that the enemy could find the appropriate frequency and “jam” or intercept the signal, thereby interfering with the missile’s intended path.

Kiesler’s key innovation was to “change the channel.” It was a way of encoding a message across a broad area of the wireless spectrum. If one part of the spectrum was jammed, the message would still get through on one of the other frequencies being used. The problem was, she could not figure out how to synchronize the frequency changes on both the receiver and the transmitter. To solve the problem, she turned to perhaps the world’s first techno-musician, George Anthiel.

Anthiel was an acquaintance of Kiesler who achieved some notoriety for creating intricate musical compositions. He synchronized his melodies across twelve player pianos, producing stereophonic sounds no one had ever heard before. Kiesler incorporated Anthiel’s technology for synchronizing his player pianos. Then, she was able to synchronize the frequency changes between a weapon’s receiver and its transmitter.

Most of you won’t recognize the name Kiesler. And no one would remember the name Hedy Markey. But it’s a fair bet that anyone reading this news letter of a certain age will remember one of the great beauties of Hollywood’s golden age ~ Hedy Lamarr. That’s the name Louis B. Mayer gave to his prize actress. That’s the name his movie company made famous.

Meanwhile, almost no one knows Hedwig Kiesler – aka Hedy Lamarr – was one of the great pioneers of wireless communications. Her technology was developed by the U.S. Navy, which has used it ever since.

You’re probably using Lamarr’s technology, too. Her patent sits at the foundation of “spread spectrum technology,” which you use every day when you log on to a wi-fi network or make calls with your Bluetooth-enabled phone. It lies at the heart of the massive investments being made right now in so-called fourth-generation “LTE” wireless technology. This next generation of cell phones and cell towers will provide tremendous increases to wireless network speed and quality, by spreading wireless signals across the entire available spectrum. This kind of encoding is only possible using the kind of frequency switching that Hedwig Kiesler invented.

Ed’s note: GUIDEPOST cannot vouch for the complete veracity of this article. 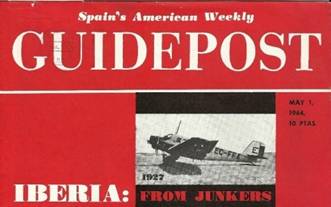 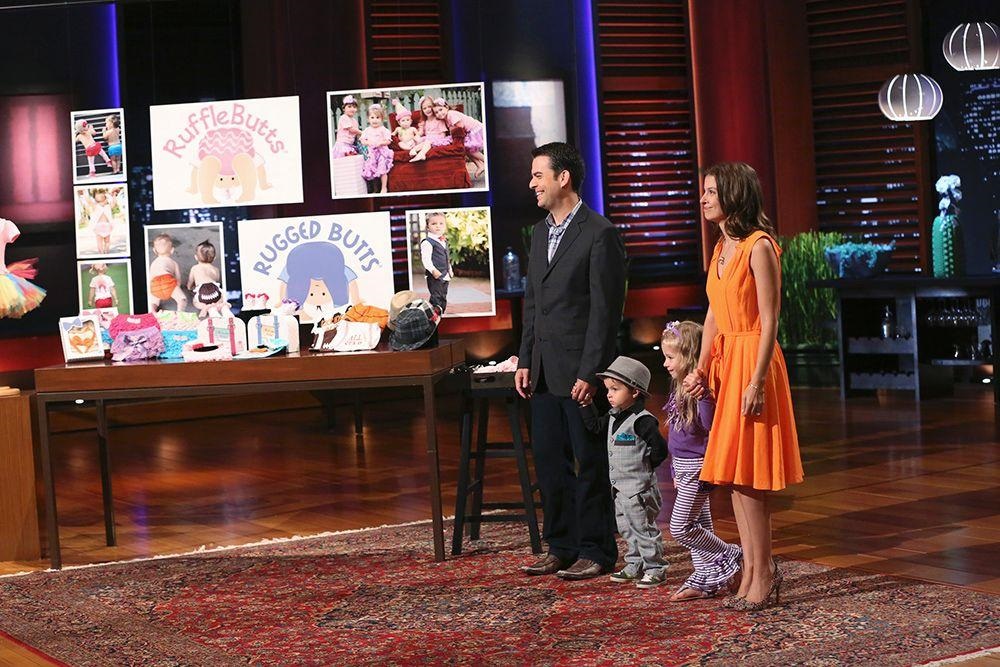 Next article STATESIDE STORIES Economic Upturn in Spain and USA »