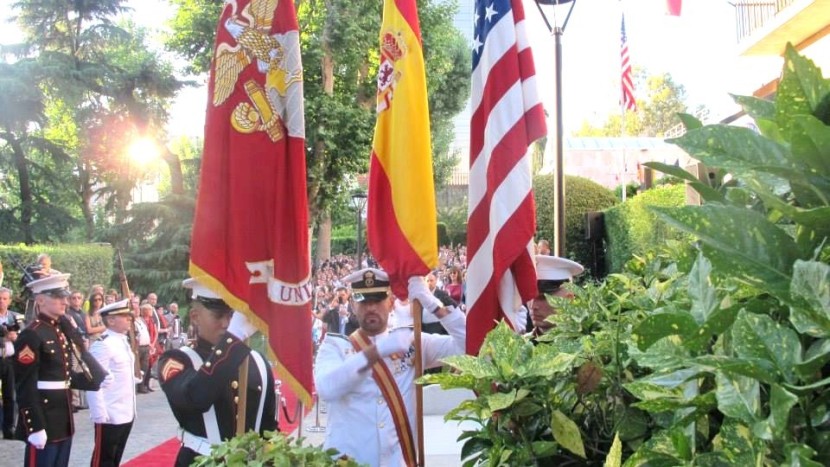 The 4th of July celebration of America’s Independence Day was held this year by the US Embassy in Madrid on the 24th of June. It goes without saying that it was a memorable event, more so because on this 237th birthday of the United States the Madrid embassy  was also celebrat6ing the 500th anniversary of Ponce de Leon’s arrival in Florida.

On this occasion we celebrate not only our own birthday but our long friendship with Spain. Five hundred years ago, the Spanish explorer Ponce de Leon arrived on the shores of Florida, beginning a deep historical and cultural relationship between our countries.

These 500 years have witnessed close collaboration between our governments, economic investments by our multinational companies and cultural exchanges between our citizens. . .

There was a third element that made this year’s celebration of 4th of July extra-special. The Ambassador’s 3 ½   years of tour of duty in Spain was at an end.  The well-loved and highly respected political appointee of the Obama administration, who could beat any career officer of the US foreign service hands down in effective diplomacy, said his goodbye at no doubt the first of many despedida parties to be held in his honor.

He told the huge crowd gathered at the US Embassy:

From the moment we arrived in Spain, [my wife] Susan and I have been treated with enormous warmth and hospitality. We are grateful that so many Spanish and American friends have joined us this evening for what will be our last Independence Day celebration at the Embassy…
Thank you for your wisdom, your support, and your friendship. For us this is a true cause for celebration.

The social activist and entrepreneur ambassador will be returning to the States to become the Dean of Tisch College of Citizenship and Public Service at the Tufts University where he graduated in 1970.

It had been a memorable day, that 24th of June, when the US Embassy in Madrid once more celebrated the American Independence Day — as well as the 500th year of close US-Spanish ties this time around.

Gigantic American flags draped over the embassy façade, setting the right mood for the 4th of July celebration on Calle Serrano, Madrid

Filling the air were happy tunes from several musical groups . . .

including the symphony band of the Madrid Marine Infantry

Previous article « MADRILEÑOS LIVE NEXT DOOR TO HEAVEN, OR SO THEY THINK