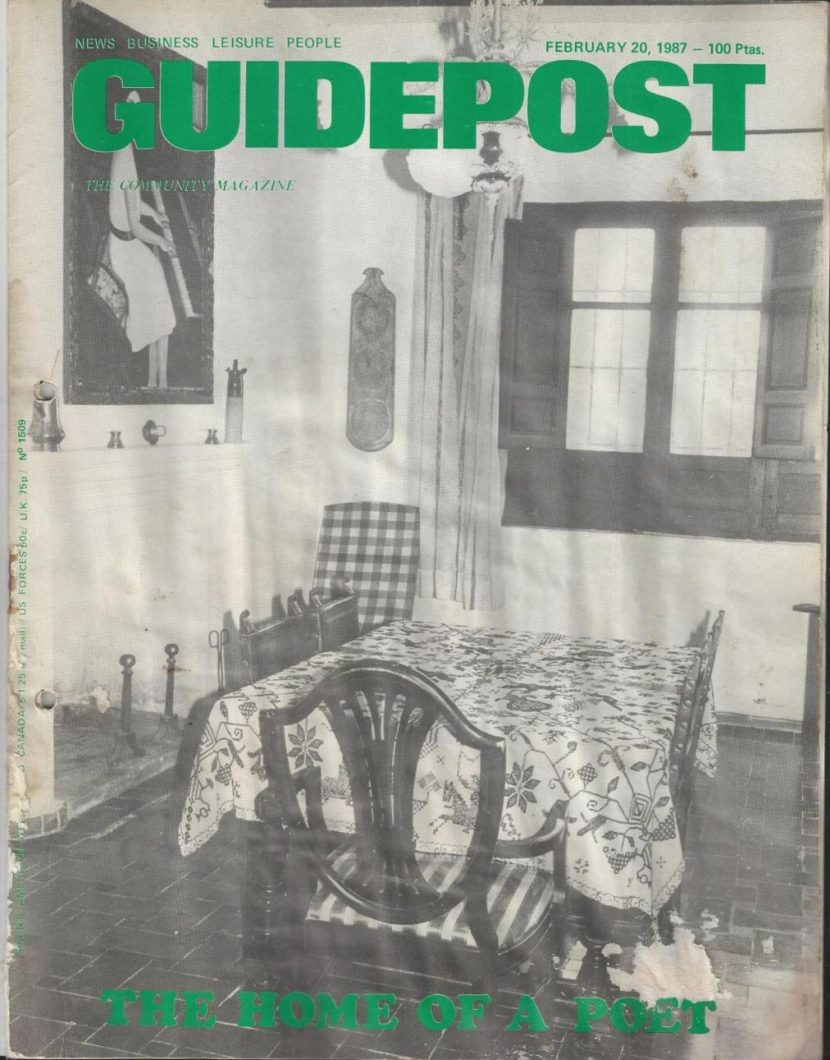 The vega of Granada is a fertile greenbelt surrounding the city of the Red Fortress, the Alhambra, against the majestic backdrop of the Sierra Nevada. Watered by the rivers Darro and Genil sprung from the snows, it is a maze of the criss-cross trunks of the popular plantations, waving corn, tobacco hung dry, and the tall chimney stacks of the sugar beet industry, – once the principal source of income of the landowners of the region. In spring, the almond blossom competes in brilliance against the snow-crested peaks beyond. Suddenly, like a pencil line sharply delimiting the green lushness of this veritable oasis, the earth turns ochre-arid, supporting only the hardy olive. 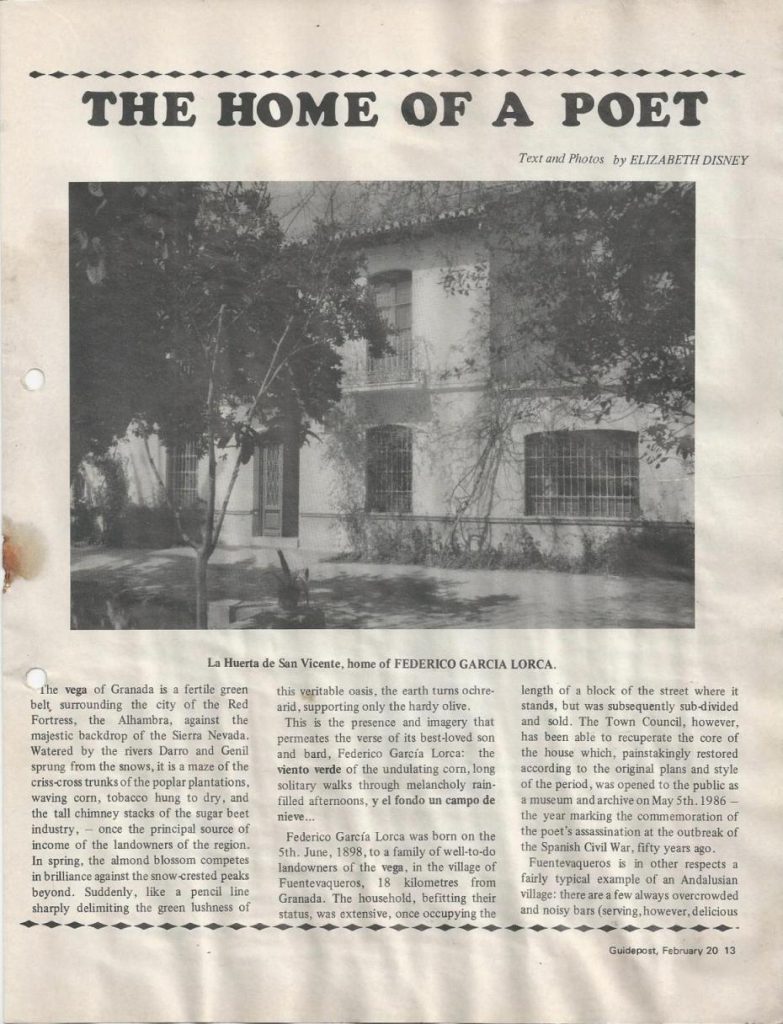 This is the presence and imagery that permeates the verse of its best-loved son and barb, Federico García Lorca: the viento verde of the undulating corn, long solitary walks through melancholy rain-filled afternoons, y el fondo un campo de nieve…

Federico García Lorca was born on the 5th. June, 1898, to a family of well-to-do landowners of the vega, in the village of Fuentevaqueros, 18 kilometres from Granada. The household, befitting their status, was extensive, once occupying the length of a block of the street where it stands, but was subsequently sub-divided and sold. The Town Council, however, has been able to recuperate the core of the house which, painstakingly restored according to the original plans and style of the period, was opened to the public as a museum and archive on May 5th. 1986 – the year marking the commemoration of the Spanish Civil War, fifty years ago. 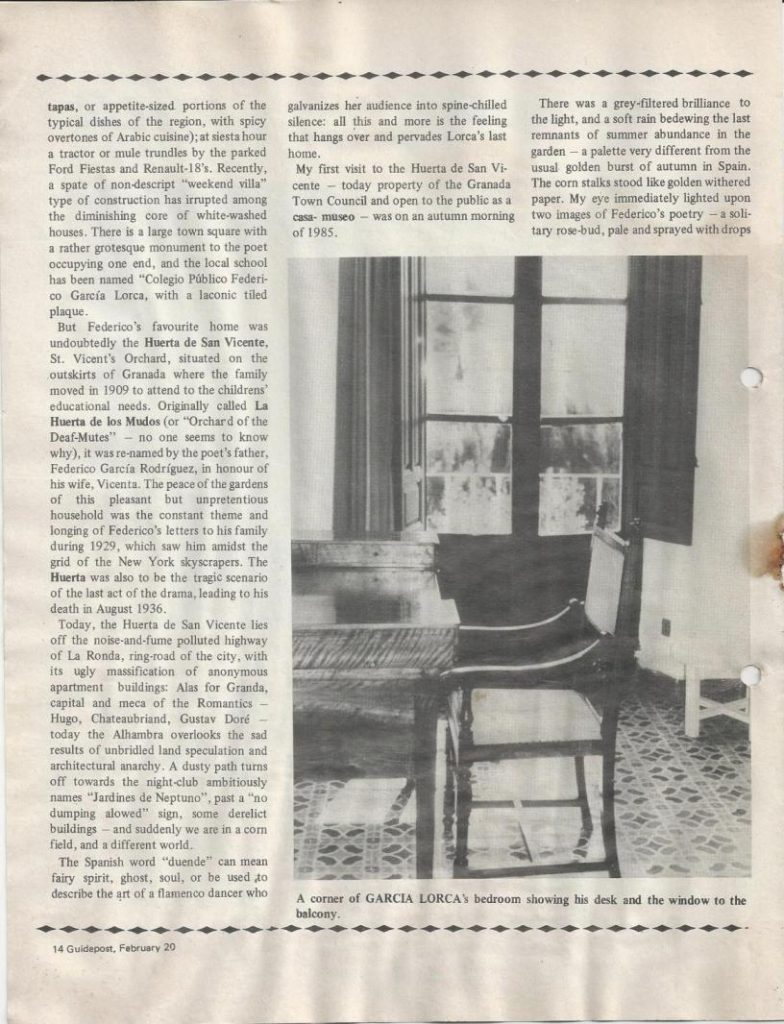 Fuentevaqueros is in other respects a fairly typical example of an Andalusian village: there are a few always overcrowded and noisy bars (serving, however, delicious tapas, or appetite-sized portions of the typical dishes of the region, with spicy overtones of Arabic cuisine); at siesta hour a tractor or mule trundles by the parked Ford Fiestas and Renault -18’s. Recently, a spate of non-descript “weekend villa” type of construction has irrupted among the diminishing core of white- washed houses. There is a large town square with a rather grostesque monument to the poet occupying one end, and the local school has been named “Colegio Público Federico García Lorca, with a laconic tiled plaque. 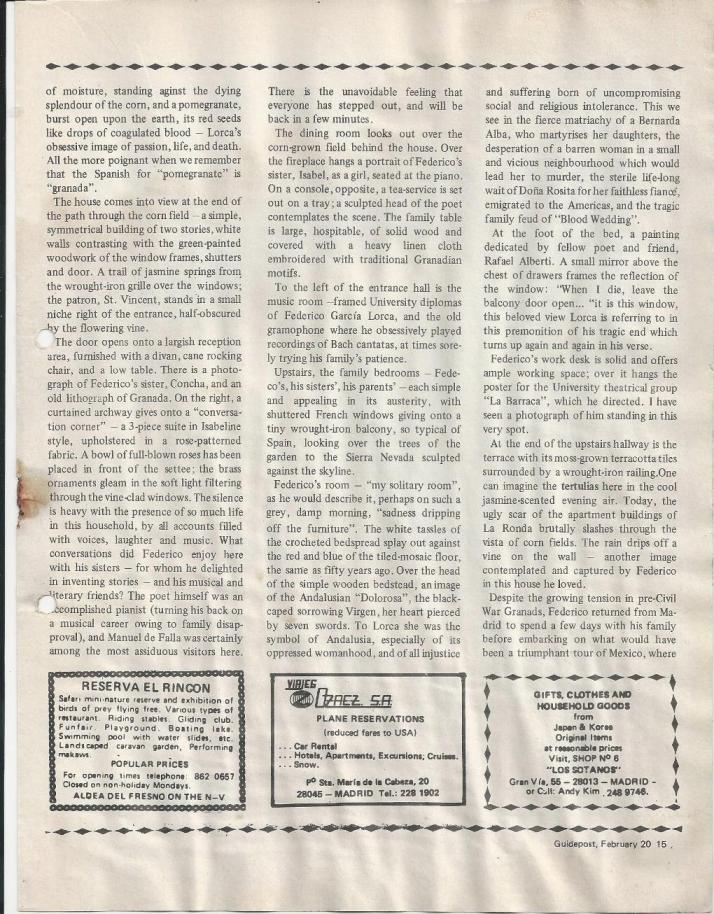 But Federico’s favourite home was undoubtedly the Huerta de San Vicente, St. Vincent’s Orchard, situated on the outskirts of Granada where the family moved in 1909 to attend to the children’s educational needs. Originally called La Huerta de los Mudos (or “Orchard of the Deaf-Mutes” – no one seems to know why), it was re-named by the poet’s father, Federico García Rodríguez, in honour of his wife, Vicenta. The peace of the gardens of this pleasant but unpretentious household was the constant theme and longing of Federico’s letters to his family during 1929, which saw him amidst the grid of the New York skyscrapers. The Huerta was also to be the tragic scenario of the last act of the drama, leading to his death in August 1936. 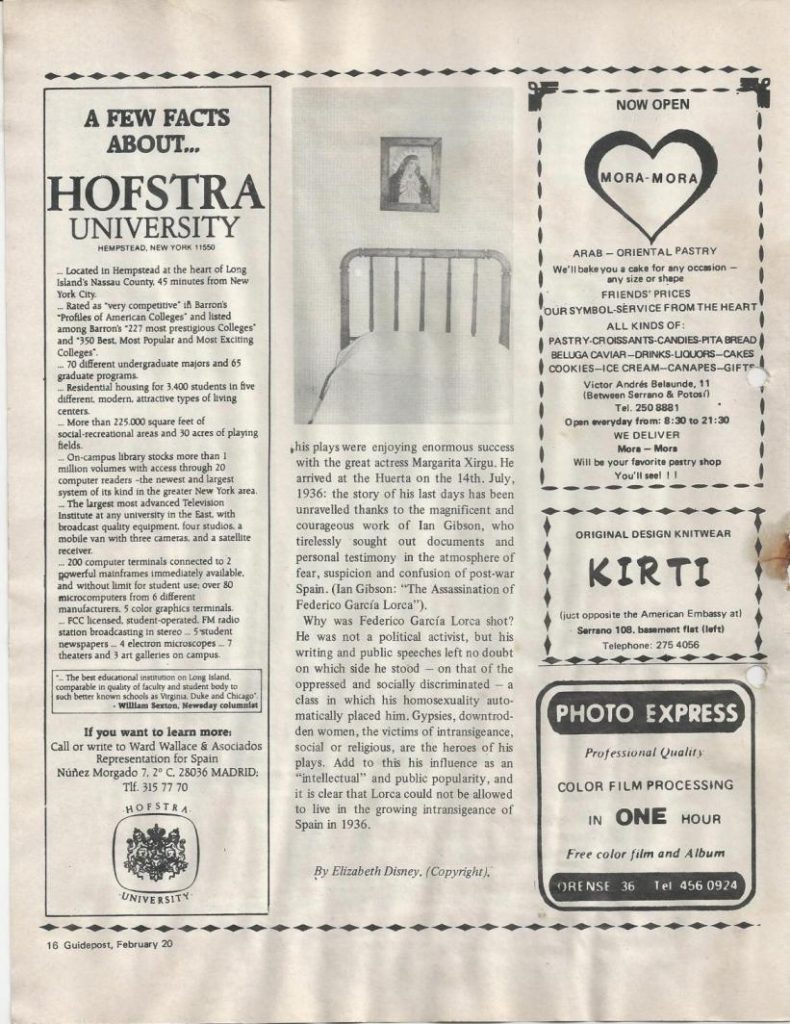 Today, the Huerta de San Vicente lies off the noise-and-fume polluted highway of La Ronda, ring-road of the city, with its ugly massification of anonymous apartment buildings: Alas for Granada, capital and meca of the Romantics – Hugo, Chateaubriand, Gustav Doré – today the Alhambra overlooks the sad results of unbridled land speculation and architectural anarchy. A dusty path turns off towards the night-club ambitiously named “Jardines de Neptuno”, past a “no dumping allowed” sign, some derelict buildings – and suddenly we are in a corn field, and a different world.

The Spanish word “duende” can mean fairy spirit, ghost, soul, or be used to describe the art of a flamenco dancer who galvanizes her audience into spine-chilled silence: all this and more is the feeling that hangs over and pervades Lorca’s last home.

My first visit to the Huerta de San Vicente – today property of the Granada Town Council and open to the public as a casa-museo – was on an autumn morning of 1985.

There was a grey-filtered brilliance to the light, and a soft rain bedewing the last remnants of summer abundance in the garden – a palette very different from the usual golden burst of autumn in Spain. The corn stalks stood like golden withered paper. My eye immediately lighted upon two images of Federico’s poetry – a solitary rose-bud, pale and sprayed with drops of moisture, standing against the dying splendour of the corn, and a pomegranate, burst open upon the earth, its red seeds like drops of coagulated blood – Lorcas’s obsessive image of passion, life, and death. All the more poignant when we remember that the Spanish for pomegranate is “Granada”. 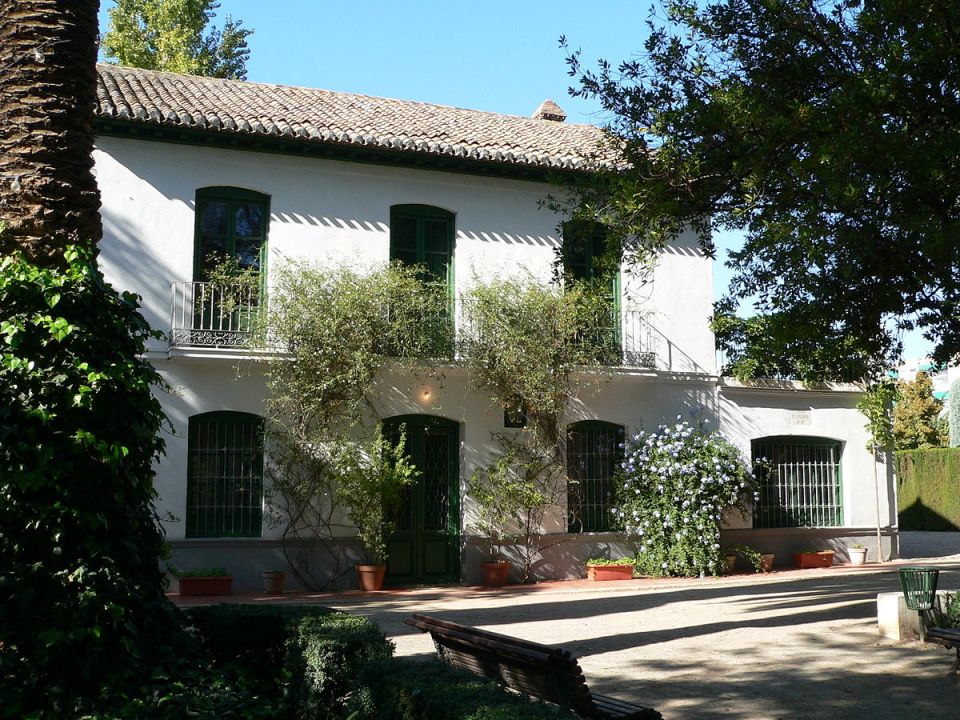