Ed’s note:
This article was first published on 22 October 1971 when the
Franco regime was still on. Hence the strictures on the
Halloween celebrations you’ll be reading about.
Other than those, the article is as timeless
and fun to read today as it was 47
years ago. It would be; this
is the third time it  is
being reprinted!
The second time was on 30 October 1987. 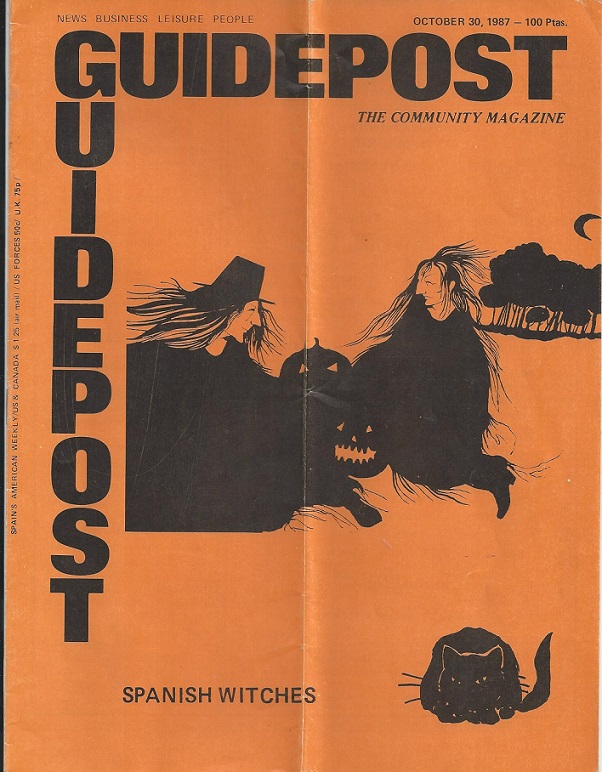 The sidewalk displays of the city’s many fruit and vegetables stands will include a nostalgic seasonal note any day now. Yes, for a limited time only, pumpkins – the genuine Halloween variety – will be making the Madrid scene. And those pumpkins will be about the only Halloween note to be found, because Spain, in common with most European countries, focuses on the significance of “All Saint’s Day” on November 1 rather than on “All Hallows’ Eve”, which precedes it and from which our almost completely non-religious “Halloween” is derived. Supposedly, the souls of the dead, witches and evil spirits are free to roam the world for that one night, wreaking whatever mischief they like – hence, via the transformations of popular tradition – our ghosts, skeletons, black cats, scaped windows and missing garbage cans. The pumpkin came into act via the seasonal harvest celebrations of late October, since the pumpkin crop traditionally signals the start of fall harvests. The pumpkin carved into a jack-o´-lantern illustrates the curious blending of various pagan and Christian traditions – the candle within the pumpkin recalling the ancient practice of lighting hillside fires as protection against the evil spirits of the night. 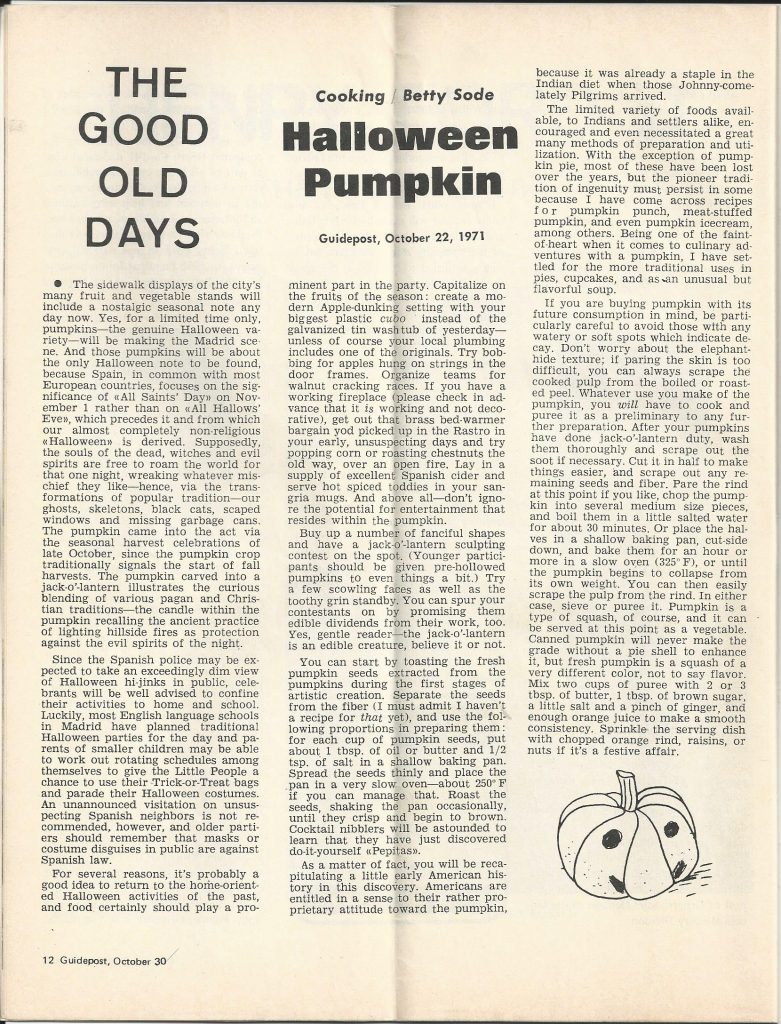 Since the Spanish police may be expected to take exceedingly dim view of Halloween hi-jinks in public, celebrants will be well advised to confine their activities to home and school. Luckily, most English language schools in Madrid have planned traditional Halloween parties for the day and parents of smaller children may be able to work out rotating schedules among themselves to give the Little People a chance to use their Trick-or-Treat bags and parade their Halloween costumes. An unannounced visitation on unsuspecting Spanish neighbors is not recommended, however, and older parties should remember that masks or costume disguises in public are against Spanish law.

For several reasons, it’s probably a good idea to return to the home-oriented Halloween activities of the past, and food certainly should play a prominent part in the party. Capitalize on the fruits of the season: create a modern Apple-dunking setting with your biggest plastic cubo instead of the galvanised tin wash tub of yesterday – unless of course your local plumbing includes one of the originals. Try bobbing for apples hung on strings in door frames. Organize teams for walnut cracking races. If you have a working fireplace (please check in advance that it is working and not decorative), get out that brass bed-warmer bargain you picked up in the Rastro in your early, unsuspecting days and try popping corn or roasting chestnuts the old way, over an open fire. Lay in a supply of excellent Spanish cider and serve hot spiced toddies in your sangria mugs. And above all – don’t ignore the potential for entertainment that resides within the pumpkin.

Buy up a number of fanciful shapes and have a jack-o´-lantern sculpting contest on the spot. (Younger participants should be given pre-hallowed pumpkins to even things a bit.) Try a few scowling faces as well as the toothy grin standby. You can spur your contestants on by promising them edible dividends from their work, too. Yes, gentle reader – the jack-o´-lantern is an edible creature, believe it or not.

You can start by toasting the fresh pumpkin seeds extracted from the pumpkins during the first stages of artistic creation. Separate the seeds from the fiber (I must admit I haven’t got a recipe for that yet), and use the following proportions in preparing them: for each cup of pumpkin seeds, put about 1 tbsp. of oil or butter and ½ tsp. of salt in a shallow baking pan. Spread the seeds thinly and place the pan in a very slow oven – about 250º F if you can manage that. Roast the seeds, shaking the pan occasionally, until they crisp and begin to brown. Cocktail nibblers will be astounded to learn that they have just discovered do-it-yourself “Pepitas”.

As a matter of fact, you will be recapitulating a little early American history in this discovery. Americans are entitled in a sense to their rather proprietary attitude toward the pumpkin, because it was already a staple in the Indian diet when those Johnny-come-lately Pilgrims arrived. 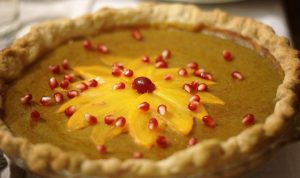 The limited variety of foods available, to Indians and settlers alike, encouraged and even necessitated a great many methods of preparation and utilization. With the exception of pumpkin pie, most of these have been lost over the years, but the pioneer tradition of ingenuity must persist in some because I have come across recipes for pumpkin punch, meat-stuffed pumpkin, and even pumpkin ice-cream, among others.  Being one of the faint-of-heart when it comes to culinary adventures with a pumpkin, I have settled for the more traditional uses in pies, cupcakes, and as an unusual but flavourful soup.

If you are buying pumpkin with its future consumption in mind, be particularly careful to avoid those with any watery or soft spots which indicate decay. Don’t worry about the elephant-hide texture; if paring the skin make is too difficult, you can always scrape the cooked pulp from the boiled or roasted peel. Whatever use you make of the pumpkin, you will have to cook and puree it as a preliminary to any further preparation. 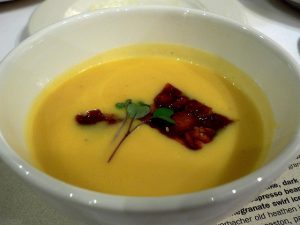 After your pumpkins have done jack-o´-lantern duty, wash them thoroughly and scrape out the soot if necessary. Cut it in half to make things easier, and scrape out any remaining seeds and fiber. Pare the rind at this point if you like, chop the pumpkin into several medium size pieces, and boil them in a little salted water for about 30 minutes.  Or place the halves in a shallow baking pan, cut-side down, and bake them for an hour or more in a slow oven (325ºF), or until the pumpkin begins to collapse from its own weight. You can then easily scrape the pulp from the rind. In either case, sieve or puree it. Pumpkin is a type of squash, of course, and it can be served at this point as a vegetable. Canned pumpkin will never make the grade without a pie shell to enhance it, but fresh pumpkin is a squash of a very different color, not to say flavor. Mix two cups of puree with 2 or 3 tbsp. of butter, 1 tbsp. of brown sugar, a little salt and a pinch of ginger, and enough orange juice to make a smooth consistency. Sprinkle the serving dish with chopped orange rind, raisins, or nuts if it’s a festive affair. 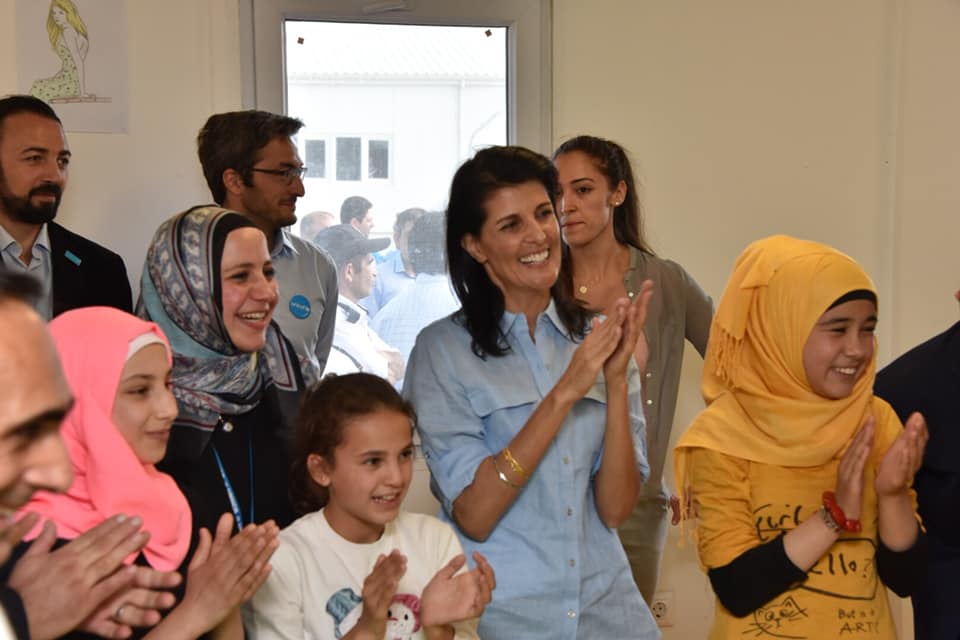 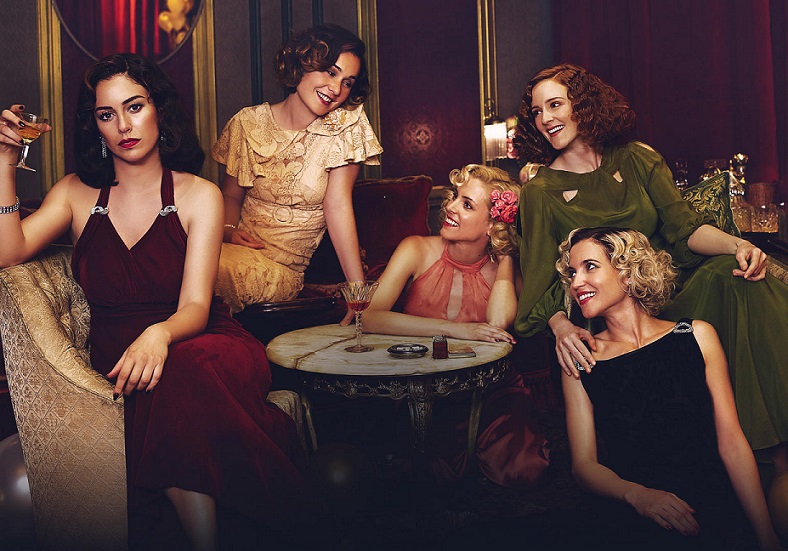