GUIDEPOST REPRINT: “SUMMING UP THE SPANIARDS, AN ACCOUNT OF HOW SOME FAMOUS TRAVELLERS HAVE SEEN SPAIN,” 3 OCTOBER 1969 — (1) Knowlege In-Depth

In 1839 an Englishman was learning over the patio of his lodging house in Seville when he saw a tall, gentlemanly–looking stranger leaning over the balustrade. He was fair, with brilliant black eyes and his appearance was commanding.

“Bonjour, monsieur, quel tristre temps!” said the Englishman, thinking he might be French.

“Yes, sir”, replied the stranger in the purest Parisian accent. “And it is very unusual weather here at this time of the year.”

After engaging in conversation a while the Englishman found the stranger could speak English as fluently as French. He tried him on Italian and again he was perfectly at home. He had a Greek servant, to whom he gave his orders in Romaic. He conversed in good Castilian with the innkeeper, exchanged a German salutation with an Austrian baron, and then engaged on a discussion on the origins of the Gypsies.

On questioning a friend on the subject, the Englishman was told that nobody knew what nation the “mysterious Unknown” belonged to, nor what were his motives for travelling. Some thought he was a Russian spy and the police kept a sharp look-out over him.

The next day the Englishman and the stranger rode out to the ruins of Italica. While  sitting near the ruins a pretty young Gypsy girl came over to them to ask them for alms. The Englishman was about to give her something when the stranger stopped him. “Do you remember what I told you about the Eastern origin of these people?” he said. “You shall see I am correct. Come here, my pretty child,” he said in Moultanese, “and tell me where are the rest of your tribe?” 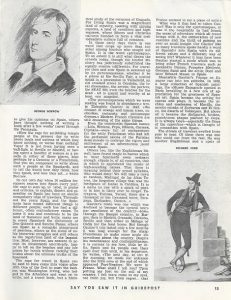 The girl was surprised to hear herself addressed in her own language, but she led the two men down to a den where there were a group of children, two men and an old hag who was cooking. As they entered, one of the men made a quick motion of the hand towards the folds of his sash. However the girl assured them they were friends. The stranger whispered something in the old crone’s ear, and as though by magic, she prostrated herself at his feet. The whole family followed suit shortly, and after conversing with them for a while and making them a handsome present, they departed.

“Where in the name of goodness did you pick up your acquaintance with the language of these extraordinary people?” the Englishman asked when they had mounted their horses. 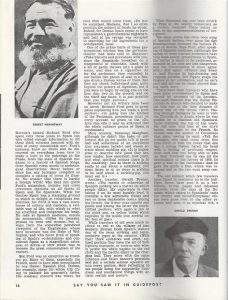 “Some years ago, in Moultan”, he replied.

“And by what means do you possess such apparent influence over them?”

But the stranger had already said more than he perhaps wished on the subject. He dryly replied that he has more than once owed his life to the gypsies and had reason to know them well.

The “mysterious stranger” of Seville was George Borrow who for five years had been travelling from one tip of Spain to the other trying to sell Bibles. During these years he had got to know Spain as few travellers have. He engaged in untold adventures which were eventually set down in what is still the most popular travel book on Spain, Bible in Spain. Borrow’s book was to become an immediate success and within a year 20,000 copies of it had been printed. It rode on the crest of a general vogue for travel in the Peninsula. 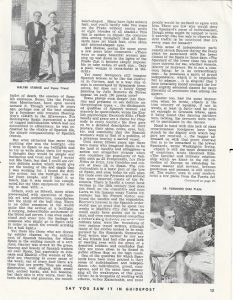 How did Borrow and numerous other famous travellers who followed him see Spain, and how does their evaluation of its traits and character, of its virtues and vices jive with your own?

Though Borrow was well qualified to give his opinions on Spain, others have thought nothing of writing a book after a few weeks through the Peninsula.

“How the rage for scribing tempts people at the present day to write about lands and nations of which they know nothing, or worse than nothing! Vaya! It is not from having seen a bullfight in Seville or Madrid, or having spent a handful of ounces at a posada in either of those places, kept perhaps by a Genoese or a Frenchman, that you are competent to write about such a people as the Spaniards, and to tell the world how they think, how they speak, and how they act…” wrote Borrow. 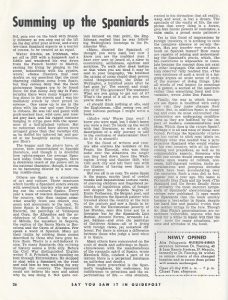 In our own day [i.e., 1969] when 20 million foreigners swarm into Spain every year, the rage to sum up, to label, to praise and criticize, to explain, dissect and generalize on Spain has been an almost compulsory urge of travellers. Throughout the years Spain and the Spaniards have meant different things to different people; each has had a different, often contradictory vision. To some it was and continues to be the land of flamenco and bulls; many see in every Spaniard the dichotomy of Don Quixote and Sancho Panza; others see Spain as a romantic playground of passions, others as the scene of noble historical struggles and still others as the lugubrious land of the Inquisition…Most, however, are content to accept its inhabitants uncritically, happy to loll on the beaches and pay low prices for hotels without racking their brains about the ultimate truths of the Spaniard.

Previous article « GUIDEPOST REPRINT: “SUMMING UP THE SPANIARDS, AN ACCOUNT OF HOW SOME FAMOUS TRAVELLERS HAVE SEEN SPAIN,” 3 OCTOBER 1969 — (2) Unique & Picturesque