GUIDEPOST REPRINT: “SUMMING UP THE SPAIARDS, AN ACCOUNT OF HOW SOME FAMOUS TRAVELLERS HAVE SEEN SPAIN,” 3 OCTOBER 1969 — (6) Awestruck Writers

Others see Spain as a storehouse of art and culture. Those museums which hardly a Spaniard enters swarm with awestruck tourists who are seeking out the “cultural Spain”. Every year a mass of tourists descends upon the country, who then traipse somewhat wearily from one church, museum and monument to the next. To these Spain is Burgos Cathedral, El Escorial, the paintings of Velásquez and Goya, the Alhambra and the architecture of Gaudí. It is the ruins of Mérida, the aqueduct in Segovia, the replica of the Santa María in Barcelona and the Caves of Altamira. Few speak a word of Spanish. Many get described by those who have gone before them. Theirs is a self-induced vision. To many Spaniards this re-living of history seems a little silly. Before the Civil War, distinguished English writer V. S. Pritchett was travelling on foot through Extremadura. He stopped to chat with a Spaniard on the road and told him he was walking his way through the country. The Spaniard could not believe his ears and asked why he was doing it. Not quite certain himself on that point, the Englishman replied that he was following Wellington’s footsteps in the Peninsular War. 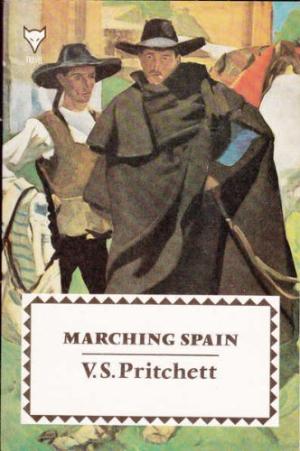 V.S. Pritchett’s book, “a vivid portrait of a timeless Spain about to be torn by civil war”

“Man,” shouted the Spaniard, “I thought you were mad, but now I know you are the maddest man I have ever seen or heard of, a slave to eccentricity, selfishness, egotism and ambition. To walk after dead battles so that when you are dead, it may be said in your biography, ‘He followed the armies of some stupid dead person called thingummybob, the Duke of Wellington, a hundred years after he had gone by. The conceit and stupidity of it! The ignorance! The madness! What are you going to get out of it? What’s the good of it to you when you’ve done it!”

“I should think nothing at all,” said the Englishman. “But seeing you sell your buttons perhaps I might write a book.”

“Madre mia! Worse than ever! I knew you were mad, but I didn’t know you were a fool. To block up the world with bad literature, to write a silly description of a silly journey to add to the confusion of materialism! Don’t do it! It is absurd!”

Yet the flood of writers and tourists who “relieve” the wonders of the Prado, the Escorial , who wax rhapsodic over the Alhambra (no longer can they bed down there like Washington Irving and Gautier did), who visit each city and tell their tale with the illusion of having seen Spain is ever greater.
See “(7) Poverty, Suffering & Gracia” for the next part.

Previous article « ACM: FALL IS IN THE AIR!

Next article GUIDEPOST REPRINT: “SUMMING UP THE SPANIARDS, AN ACCOUNT OF HOW SOME FAMOUS TRAVELLERS HAVE SEEN SPAIN,” 3 OCTOBER 1969 — (5) iIndividualism, Independence & ‘Democracy’ »