GUIDEPOST REPRINT: BARCELONA — A CITY FOR CHILDREN OF ALL AGES”, 3 May 1985

A City for Children of All Ages
by Robert Crowe

In his book “Iberia” James Michener likened Barcelona to a bottle of champagne with its heady and dangerous quality. But don’t let this fool you into believing that you must be over 18 to enjoy it.

In fact, those people under 12 will probably have the best time of all.

So, if you are thinking of the perfect family vacation this summer head for Barcelona, but be forewarned, your kids just might have a better time than you! 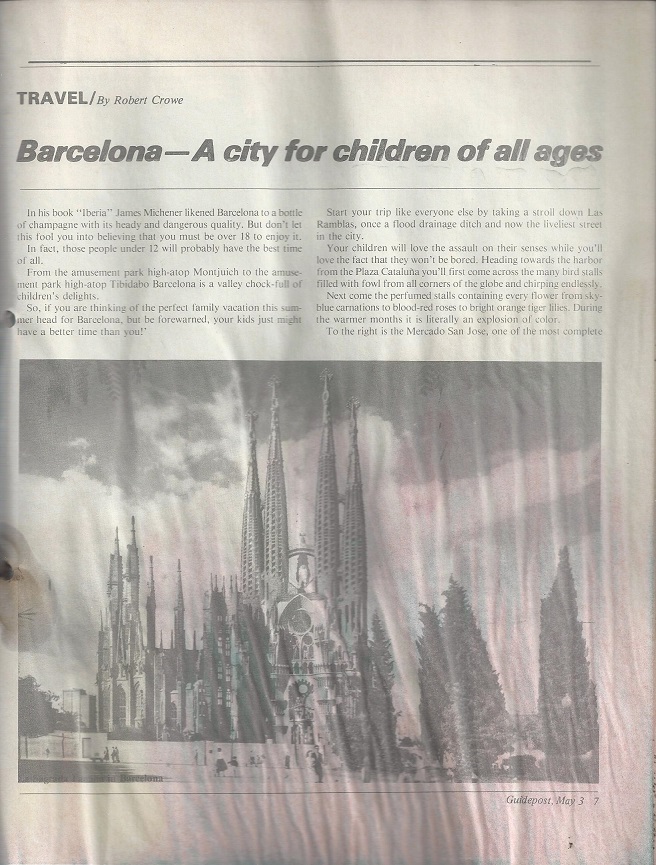 Start your trip like everyone else by taking a stroll down Las Ramblas, once a flood drainage ditch and now the liveliest street in the city.

Your children will love the assault on their senses while you’ll love the fact that they won’t be bored. Heading towards the harbour from the Plaza Cataluña you’ll first come across the many bird stalls filled with fowl from all corners of the globe and chirping endlessly.

Next come the perfumed stalls containing every flower from sky blue carnations to blood-red roses to bright orange tiger lilies. During the warmer months it is literally an explosion of color.

To the right is the Mercado San Jose, one of the most complete open-stall markets in Spain. To the left is the city’s wax museum housing a chamber of horrors, characters from the most famous nursery rhymes, a submarine and a Star Wars exhibit. Both good fun.

As you approach the harbour you’ll hit the older part of Las Ramblas and the section with the most street artists. Mimes, jugglers and puppets block your path while trumpets, drums and guitars fill your ears.

At the base of Las Ramblas is the harbor and the monument to Columbus.  .  . Because Ferdinand and Isabel were in residence here at the time it was the first European city to hear report of Columbus’ voyage. [This] give you a chance to explain to your children, firsthand, one of the most chapters in American history.

The harbor . . . is one of the busiest in Spain and one of the most important on the Mediterranean. Small excursion boats are available for an hour’s visit around the docks and piers.

On the north side of the port lies Barceloneta, the seedy, back-alley section of the port. An afternoon spent eating one of the fine paellas served up in the many restaurants . . . is relaxing for you and fun for your kids. . . 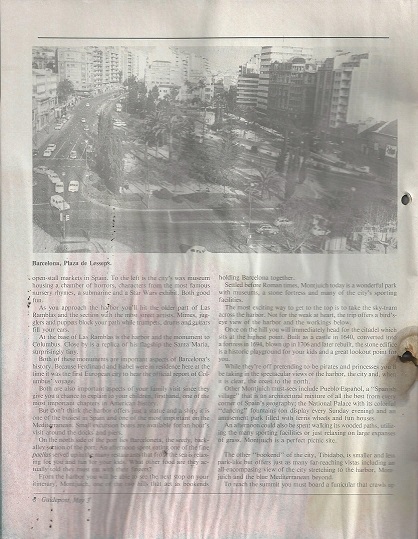 From the harbor you will be able to see the next stop on your itinerary, Montjuich, one of the two hills that act as bookends holding Barcelona together.

Settled before Roman times, Montjuich today is a wonderful park with museums, a stone fortress and many of the city’s sporting facilities.

The most exciting way to get to the top is to take the sky-tram across the harbor. Not for the weak heart, the trip offers a bird’s eye view of the harbor and the workings below.

Once on the hill you will immediately head for the citadel which sits at the highest point. Built as a castle in 1640, converted into a fortress in 1694, blown up in 1706 and later rebuilt, the stone edifice is a historic playground for your kids and a great lookout point for you.

While they’re off pretending to be pirates and princesses you’ll be taking in the spectacular views of the harbour, the city and, when it is clear, the coast to the north.

Other Montjuich must-sees include Pueblo Español, a “Spanish village” that is an architectural mixture of all the best from every corner of Spain’s geography; the National Palace with its colorful “dancing” fountains . . . and an amusement park filled with ferris wheels and fun houses . . .

The other “bookend” of the city, Tibidabo, is smaller and less park-like but offers just as many far-reaching vistas including an all-encompassing view of the city stretching to the harbour, Montjuich and the blue Mediterranean beyond.

To reach the summit you must board a funicular that crawls up the step embarkment. . .

Once on the top you will find the Temple of the Sacred Heart and one of the oldest and most unique amusement parks in Europe. . .

Back on the ground and in the heart of the city you will realize that even the architecture of Barcelona will enchant your children. Start at the city’s most well-known landmark, the Sagrada Familia, a half-finished cathedral like you’ve never seen. 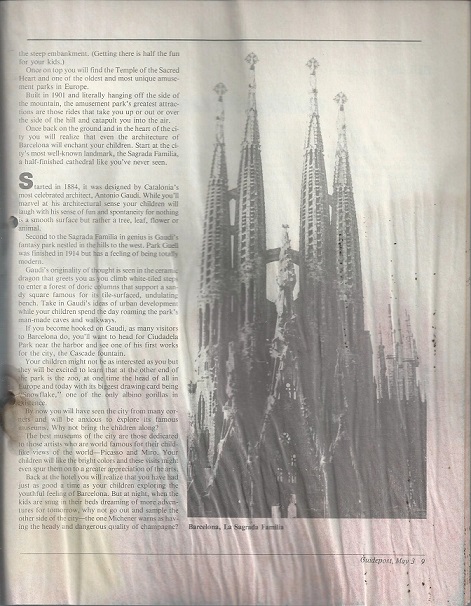 Started in 1884, it was designed by Catalonia’s most celebrated architect, Antonio Gaudi. While you’ll marvel at his architectural sense your children will laugh with his sense of fun and spontaneity for nothing is a smooth surface but rather a tree, leaf, flower or animal.

Second to the Sagrada Famila in genius is Guadi’s fantasy park nestled in the hills to the west. Park Guell was finished in 1914 but has a feeling of being totally modern.

. . . Take in Gaudi’s ideas of urban development while your children spend the day roaming the park’s man-made caves and walkways.

If you become hooked on Gaudi, as many visitors to Barcelona do, you’ll want to head for Ciudadela Park near the harbor and see one of his first works for the city, the Cascade fountain.

Your children might not be as interested as you but they will be excited to learn that at the other end of the park is the zoo, at one time the head of all in Europe and today with its biggest drawing card being “Snowflake,” one of the only albino gorillas in existence.

By now you will have seen the city from many corners and will be anxious to explore its famous museums. Why not bring the children along?

The best museums of the city are those dedicated to those artists who are world famous for their child-like views of the world – Picasso and Miro. . .

Back at the hotel you will realize that you have had just as good a time as your children exploring the youthful feeling of Barcelona. But at night, when the kids are snug in their beds dreaming of more adventures for tomorrow, why not go out and sample the other side of the city – the one Michener warns as having the heady and dangerous quality of champagne. 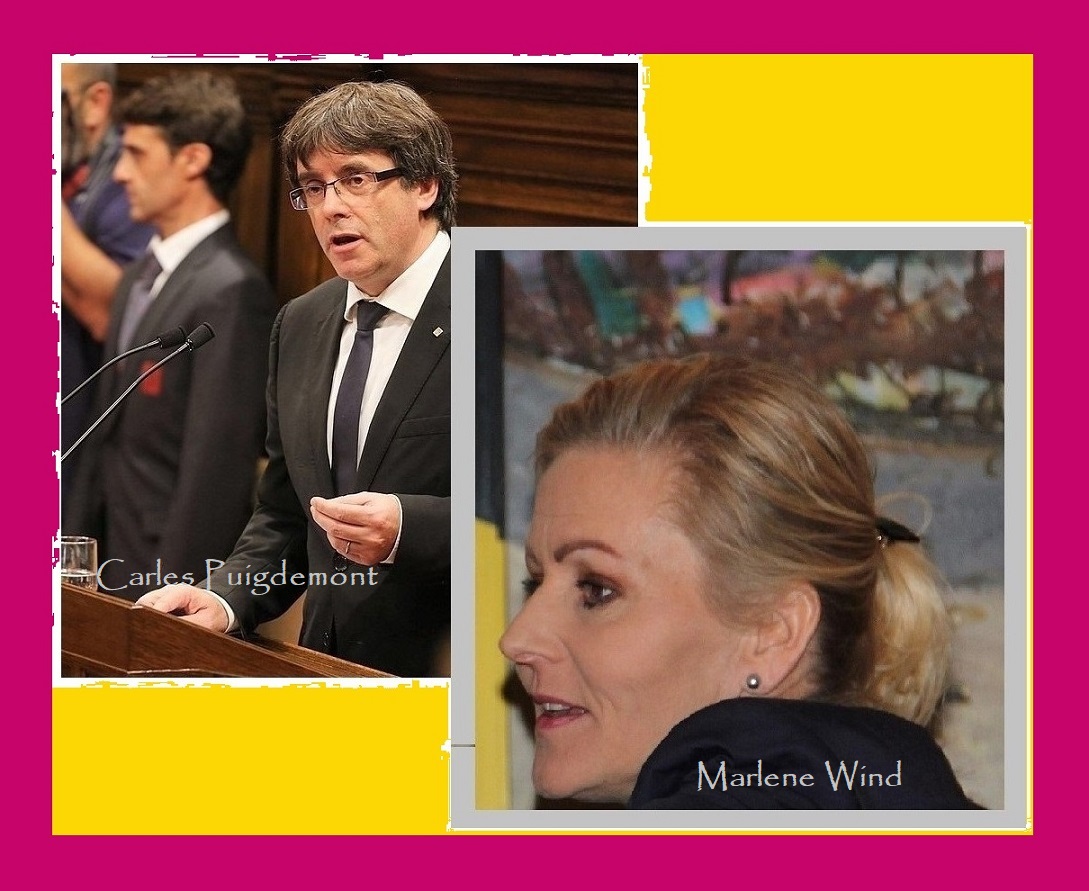 Previous article « CATALONIA: THE FUGITIVE WHO WANTS TO BE PRESIDENT (AGAIN)
Next article A Second Opinion: ‘Courtly Love’ in New Age Spain! »